The Lamborghini Huracan Super Trofeo Omologata – or STO for short – is the brand's most driver-focused supercar ever.

Judging the book by its heavily bewinged cover, you might think this is the upgraded 'EVO' successor to the 2017 Huracan Performante, but no. To find the Huracan STO's true predecessor you need to wind back to 1998 and the formidable Diablo GT.

For the last two decades or more Lamborghini's sportiest, most hardcore offerings have been resolutely all-wheel drive, the Huracan STO, like the Diablo GT, drives only the rear wheels. MOREThe 50 sexiest cars of all time
It takes 30m to stop from 100km/h and 110m to stop from 200km/h thanks to giant carbon-ceramic brakes – 390mm discs and six-piston calipers at the front and 360mm discs and four-piston calipers at the rear – with materials expertise from Formula 1 improving stress resistance by a claimed 60 per cent compared to regular carbon-ceramic brakes.

According to Lamborghini's now-former CEO, Stefano Domenicali: "The Huracan STO is the purest incarnation of Lamborghini Squadra Corse heritage, directly transferring technologies from the Huracan Super Trofeo EVO and drawing on the Huracan GT3 EVO's unique accomplishment of winning three consecutive times in the Daytona 24 hours." 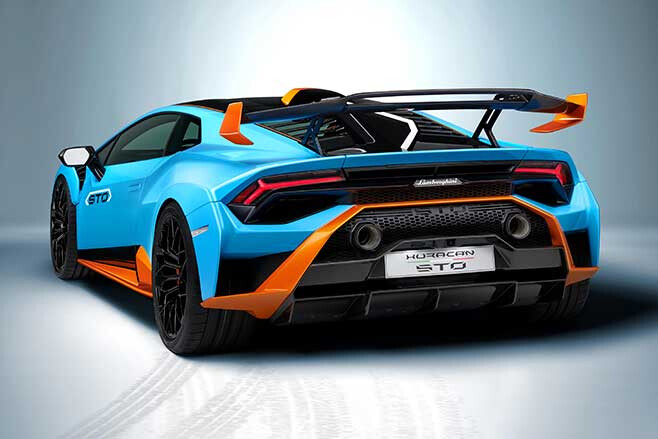 As such, every part of the car has been honed with racetrack performance in mind.

There are increased tracks, bespoke Bridgestone Potenza tyres measuring 245/30 front and 305/30 rear with a choice of street and track compounds and the suspension uses the latest MagneRide adaptive damping, stiffer bushings and new anti-roll bars.

MOREIs the Urus SUV a real Lamborghini?
Magnesium rims, a thinner windscreen and carbon exterior panels reduce weight to 1339kg (dry), 43kg less than the previous Performante, though the removal of the front drive system undoubtedly helps that figure.

Aerodynamics is where the STO takes the biggest strides forward, however. Engineers have merged the bonnet, front guards and bumper to create a Miura-esque clamshell to save weight, while there's also a new front splitter, air ducts to improve radiator cooling and increase downforce and louvres over the wheels to extract turbulent air. 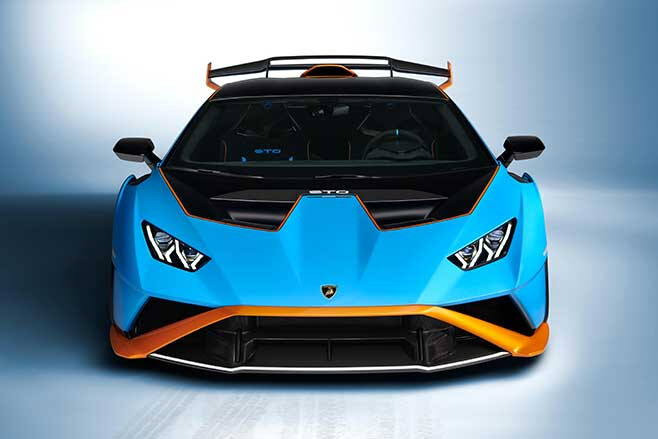 At the rear a new bumper reduces drag and incorporates a NACA duct for engine cooling, the roof-mounted air scoop improves cooling, a 'shark fin' increases stability and the manually-adjustable rear wing can alter the aero balance of the car by up to 13 per cent depending on its position.

Lamborghini has dispensed with the clever ALA system from the Huracan Performante and Aventador SVJ but claims the STO's new setup increases overall downforce by 53 per cent. Inside, there are carbon seats, no carpets, fabric door pulls, four-point seat belts, a rear arch made from titanium alloys and a full telemetry system.

Lamborghini's Ad Personam personalisation program will also allow owners to let their imaginations run wild when speccing the exterior and interior of their Huracan STO.

Speaking of which, Australian pricing and availability have not been announced at the time of writing, but overseas prices suggest around $500,000 is likely, and that's before on-roads and options. We'll bring you more details as they come to hand.