MERCEDES-AMG and Ford Performance are readying their next-generation pocket rockets – the A45 and Focus RS – to lock horns with the Audi RS3 in a high-powered hot hatch arms race.

Outputs of more than 300kW are on order, with news from British outlet Autocar claiming Ford will employ 48-volt mild-hybrid electrification to boost the 2020 Focus RS’ 2.3-litre turbo four-cylinder beyond the current car’s 257kW/440Nm outputs – while also making it more fuel efficient.

Next Mercedes-AMG A45 to have more than 300kW

Performance enhancements by aftermarket tuners Mountune were officially adopted for the outgoing Focus RS by Ford in the UK, taking peak power and torque up to 275kW/510Nm for the Heritage Edition (which sadly never came to our shores). Adding a 48-volt integrated starter/generator to bolster the low range with around 20kW/90Nm would provide better take-off acceleration and provide a “torque fill” capability to combat turbo lag – thus enabling a larger turbo to enhance top-end power.

Such upgrades would put the Focus RS toe-to-toe with rivals from the premium end of town, potentially trimming its 0-100km/h sprint time from 4.6sec down into the low 4.0-second bracket, where the current 280kW/475Nm Mercedes-AMG A45 lurks with a 4.2sec claim. 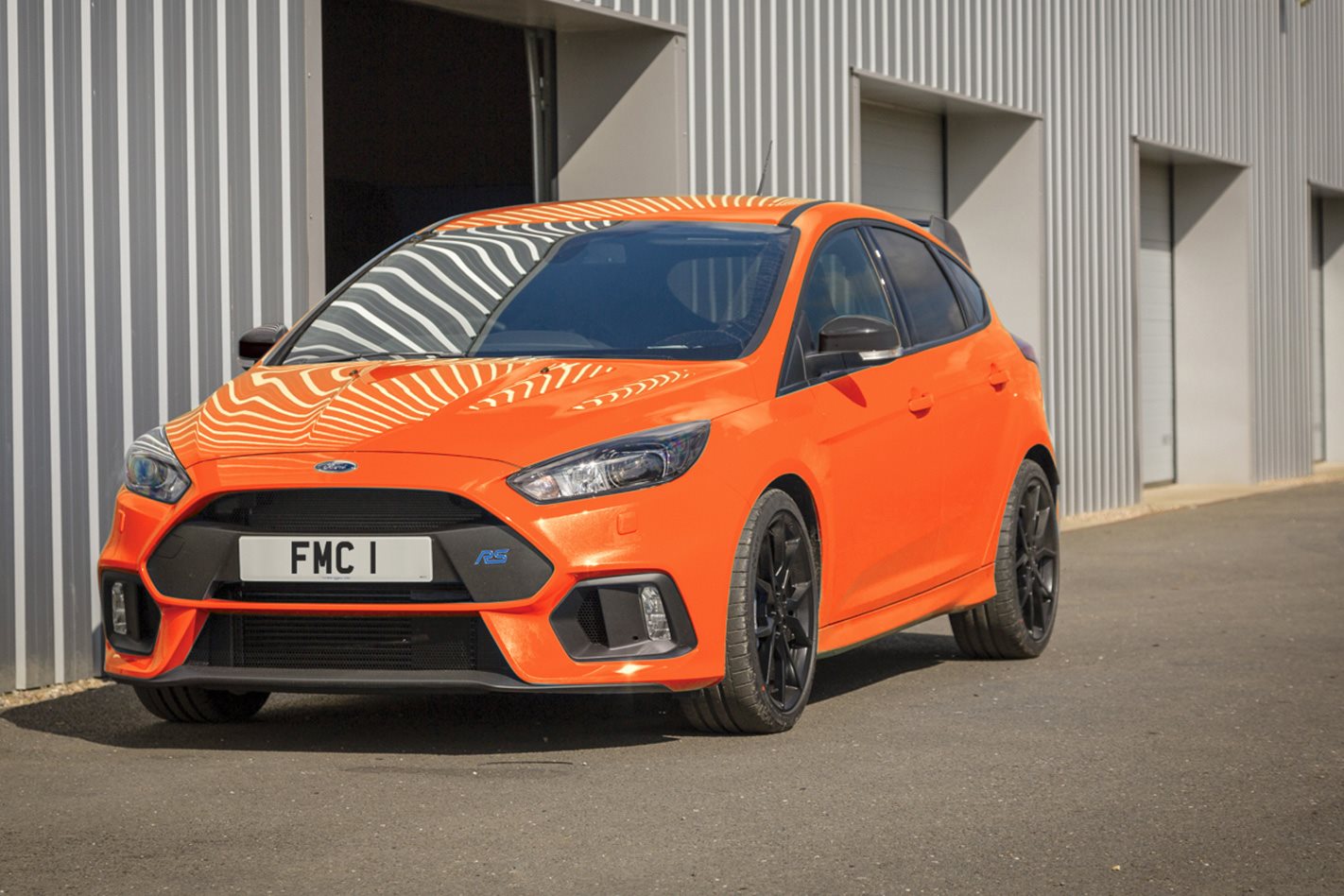 However, AMG chairman Tobias Moers confirmed to Wheels at the recent Geneva motor show that the MFA2-based, next-gen A45 will have at least an Audi RS3-matching 294kW, and the dynamic performance to put the noses of all other hot hatches out of joint.

“The A45 which is coming is going to be the next benchmark for the segment,” claims Moers. “This is for us the task. For performance, power output, everything.

“What we’re doing for [the] next generation is developing a brand-new 2.0-litre four-cylinder engine. This is [the] key for 400-plus horsepower [more than 294kW]. There is going to be 400-plus. But that output only makes sense with driving dynamics which are equal. I’m not a fan of over-powered cars.”

The current A45 launched in 2013 with 4Matic all-wheel drive. AMG engineers have since developed a fully variable system for cars on the bigger MRA platform, such as the E63 S, called 4Matic+. Some of the smarts within that system will contribute to the A45’s evolved all-wheel drive.

“We haven’t finalised the name for that,” says Moers, confirming the new system’s technology advance. Torque-vectoring differentials will be the key, “but not the same” as found in the existing 280kW A45.

So is a Focus RS-style drift mode on the cards? “Ah! I don’t know,” says Moers, with a look that suggests this isn’t the first time the idea has come up.

It is understood an even fiercer A45 S is slated for further down the track, rumoured to have an additional 22kW (30PS) and with a high likelihood of electrical assistance for its turbocharger. 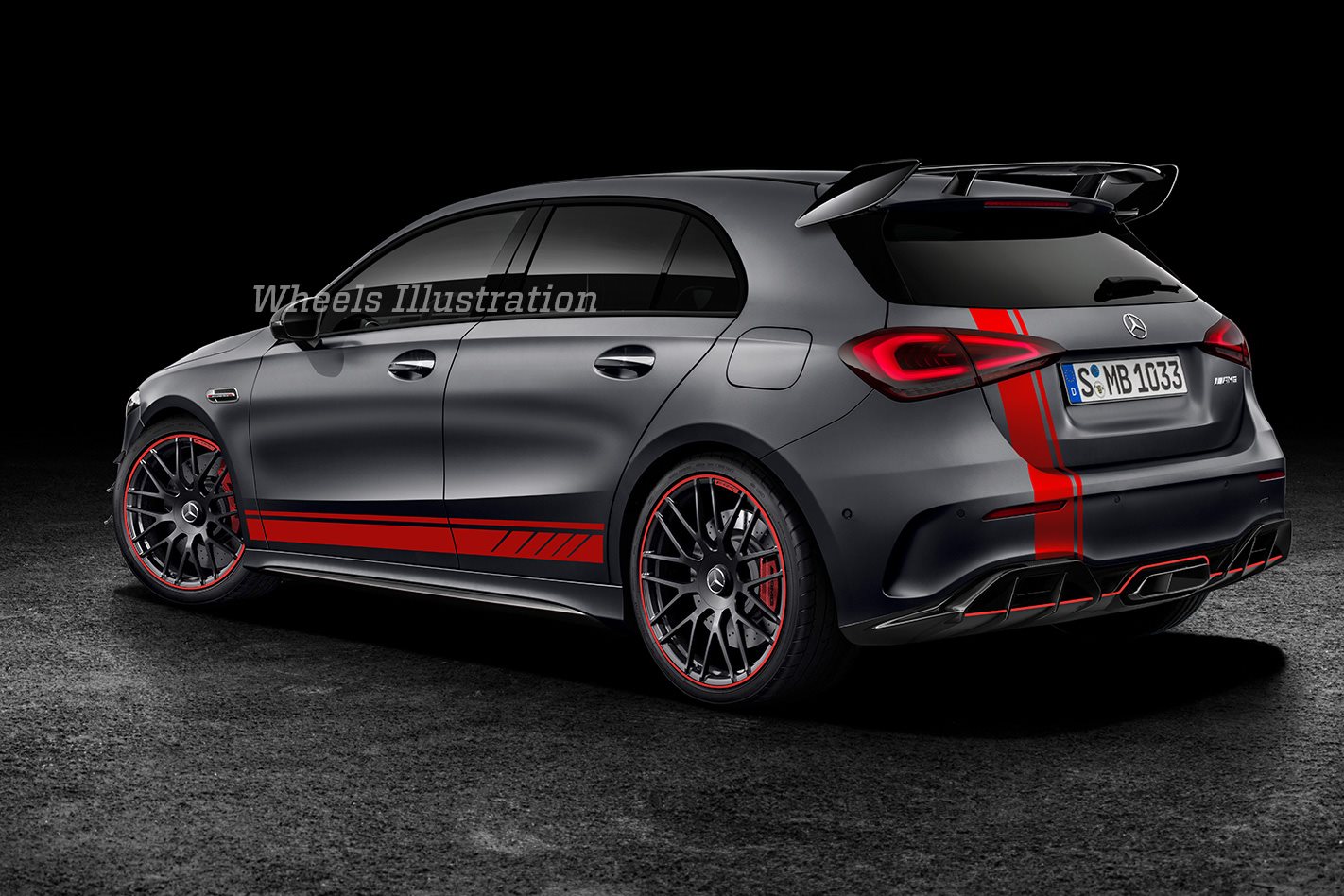 “We use in the Project One an electrified turbocharger. This is something I promise you’re going to see sooner or later in our other portfolio,” says Moers.

AMG’s cheaper, entry-level A35 performance hatch will also feature 48-volt mild-hybrid technology for its tilt against the Audi S3 and VW Golf R, though Moers says the A45’s bespoke engine will not have electrical assistance.

Diversifying AMG’s small car offering into two model lines allows the mad folk at Affalterbach to go slightly mental with the A45, while the A35 covers off the majority of volume hot-hatch rivals.

Moers confirmed as many as 14 small AMGs are on the cards, with 35 and 45 variants of seven of the eight new MFA2 vehicles (everything but B-Class) in his crosshairs.

“Not necessarily in every perspective regarding the 35 and the 45 but yeah, we’re going to cover the portfolio. Seven multiplied with 35s and 45s.”

Mercedes’ next-gen A-Class will launch in Australia later this year, though the next A45 is unlikely to be revealed until the Geneva show in 2019.

Ford’s next-gen Focus will be revealed next week, though a new RS is not expected to join the line-up until 2020.