BMW’s Nurburgring Nordschleife taxi rides are thrilling, but nowhere near as this.

BMW granted a lucky few who had won a Shell Helix competition the chance to strap in its DTM-spec M4. They then were plonked next to Augusto Farfus before being pushed out for an attack of the infamous ‘Green Hell’.

Farfus didn’t attack the full 20.8km of track, instead staying hot from only the Bridge to Gantry section of the track. It cut his attempt by 1.7km, but still saw him clock the section in six minutes and 14 seconds.

As a BMW factory driver who not only set pole there in 2014 in a GT3-spec Z4, but won the Nurburgring 24 Hour in a M3 GT2 racer, yeh, Farfus knows his way around the place.

The cars, too, are wild beasts. Filled with 360kW of V8 and pushing 1000kg of aero-honed carbon fibre, today’s DTM racers are more NASA than road car. 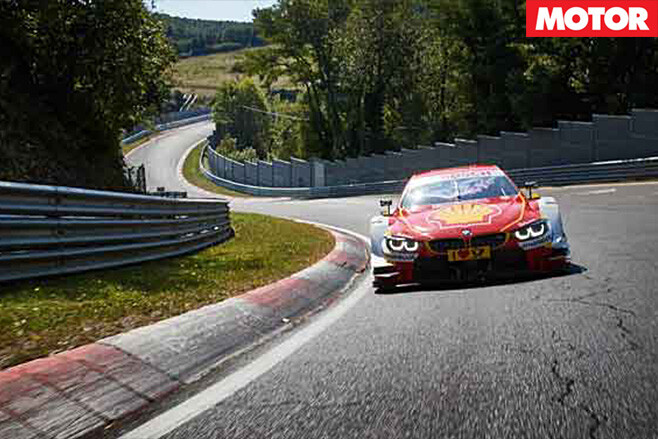 Having just battled on the Nurburgring Grand Prix track for the DTM series, BMW said the car had been “adjusted” for specific conditions of the ’Ring.

But what can we deduce from the time? Not much. The car carried extra human ballast, one which Farfus took time to converse with various times, making the attempt hardly a qualifier.

The internet moots this shortened ‘bridge-to-gantry’ lap is 15-20 seconds faster than a full lap. Putting the DTM-spec M4, even with passenger, at around 6:40 over the entire 20.8km.

The fastest production vehicle around the Nurburgring Nordschleife is Porsche’s 918 Spyder, at 6:57, while the fastest racing lap was taken by Stefan Bellof in a Porsche 956, at 6:11.13.

Comparison aside, there’s still Farfus’ riveting helmet-footage to drink in. Sit back and enjoy the ride.