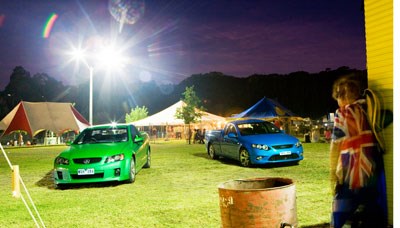 Ford and Holden's hot ute heroes abandon the building site for a shot at sideways glory at the annual Kandos Street Machine Show.

The story goes that the first Aussie ute was designed by Ford engineer Lew Brandt in 1934 at the request of a farmer's wife in Victoria.

Fast forward 75 years and the ute has grown into a fair-dinkum Aussie icon: every tradie and cocky from Hobart to Broome has one in the garage, we've got race series dedicated to tray-backs and ute musters that number in the thousands.

But Wheels has been a bit remiss recently by overlooking one crucial stoush: SS v XR8. So we threw the swag in the back and headed to an all-Aussie festival of horsepower to see how these new-gen utes are received in the Ford and Holden heartland - do they carry cred with the faithful, or are they just tray-backed sports cars for cashed-up city slickers? So welcome to the Kandos Street Machine Show. Think of it as a downsized Summernats: a celebration of blowers, burnouts and beer.

Rolling into the showground-cum-campground on Friday in 'my' shiny new blue Ford XR8 ute, I accidentally venture onto Hawkesbury Holden Streeters turf, a car club where Holden is God and Fords are as welcome as an enema. A broad-accented bloke with a terry-towelling hat and a can of Jack Daniel's leans into the window. "A farkin' Ford? You're bloody kiddin', aren't ya!? This is Holden country mate - piss off." Rivalries run deep out here...

Kandos lies about 230km north-west of Sydney, but choking Friday afternoon peak-hour traffic meant it was a four-hour haul out west. Plenty of time, then, to appreciate the more sedate virtues of the modern ute. Both the XR8 and SS are surprisingly refined over both smooth urban freeways and coarse-chip country roads. Tyre roar is muted, wind noise hushed and both offer hugely comfortable seats.

The SS offers a superior driving position (you sit 40mm too high in the Ford), but the XR8 better soaks up road acne at low speeds. Turn up the wick on typically patchy country roads, however, and the XR8 gets a little skittish. The live-axle rear end bucks under hard braking into corners and power-down exits. The Commodore's multi-link IRS rear, on the other hand, inspires confidence by simply grippin' and goin'.

But this was never conceived as a traditional test; we entered both utes in some of the driving events to see whether it's the General or the Blue Oval that really walks the walk.

Andrew Walker, who's been running the show for eight years, had kindly agreed to waive the entry fees for Wheels on one condition: "I want to see smoke when you warm the tyres up. I want to see a skid." What's a bloke to do?

The show itself is set in a sprawling grass sports complex. The camping area forms a ring around a football field which hosts the show 'n' shine and grass driving events. In the north-west corner, a concrete burnout pad and dragstrip has been painted black with rubber.
After settling into camp, we take a walk among the campers and cars. It's quickly clear that Holden is king out here. There's dozens of VKs, VLs, and VPs scattered among the tents; Toranas range from old LCs to lovingly restored A9Xs. HRs, HTs and HXs are everywhere. Ford's presence is largely represented by XDs and XEs, but a few GT-HO replicas, a couple of mint XB coupes and a Cortina with an idle like a Blundstone to the skull also share real estate with camp chairs and eskies.

Our XR8 pulls a surprising amount of attention, simply because it's brand new. Steve from Gulgong wanders over, but it seems he's never been told that comprehensible speech requires pauses between words.

"Um, the dunnies are over there, mate."

Bob from Lithgow has a better grasp on communication. "I don't really like the way she looks. Bit soft, really. Needs to be blunter and tougher, particularly around the headlights. The VE looks much better; stronger and tougher."

The rest of the night is spent talking cars, swapping stories and enjoying a few tinnies. Tomorrow, we'll line up at the go-to-whoa.

The campsite begins to stir just after dawn. Unshaven blokes wobble towards the shower blocks, red-eyed and grumbling. Mums chase kids between the cars, faces flashing between gleaming blowers and chromed injector hats. By 6:45am most of the camp is up and moving. The whirring of starter motors cracks the morning air, followed by the deep sonic boom of dozens of V8s cranking into life. Soon the camp is filled with petrol fumes and bent-eight burbles.

By 8:30am the place is buzzing. Blokes tinker under raised bonnets, fiddling with carburettors, adjusting throttle cables and grunting to one another. A tangible sense of excitement and expectation ripples through the showground.

The go-to-whoa is simple and self-explanatory. You start at one end of the 'chute' (the corridor of concrete that incorporates the burnout pad), 'warm' the tyres, then drag start from the Christmas tree lights. About 250m along the track is a marker, where you're required to stop within a 40cm area. The fastest time wins.

The XR8 is up first. Left foot hard on the brake, throttle mashed to the firewall. The rear tyres groan as they try to overcome the grippy, rubber-painted surface. Eventually the rears light up, the tacho hovering at 4500rpm. Smoke swells from the rear and the crowd gives a cheer. Engine loaded up against the brake, staging lights flash from yellow to giddy-up.

Stomp the loud pedal, rear tyres chirping as the blue ute surges forward. But the long-stroke V8's comparative lack of mid-range torque (a complaint we've levelled at the Boss V8 since the BA Falcon) means I'm near the finish line before the Falcon really hits its stride. I stamp the brakes and the XR8 pulls up strongly, but I've been too conservative and pull up 10cm short. There'll be no silverware for Ford today.

Next, the VE. Now nicknamed 'Kermit', the Holden puts on a stronger smoke show. After the initial struggle to break traction, the tacho rips to redline, bouncing off the limiter as the tray disappears in swirling smoke. The crowd loves it, drawing first blood to the Commodore in our Ford versus Holden war.

The lights flash green, but the SS bogs down slightly off the line. The Chev-sourced donk punches hard in the mid-range, though, piling on pace as I roar down the chute. Red mist in the eyes and tyre smoke in the nostrils, I brake much later this time ... and skid straight past the line. Disqualified. Driving duties completed, the rest of the day and most of the night is spent like everyone else here: examining cars, talking V8s and soaking up the atmosphere, much of which comes in cans labelled 'beer'.

Service at the makeshift bar stops at midnight and the lights go dim. The crowd gets restless. We all know what's going to happen next.

"Let's fuggin' brawl!" yells a bloke in a faded blue singlet with the southern cross inked into his shoulder. A bar stool goes whistling into the crowd and fists fly, along with more bar stools. It sounds hairy, but I swear most people are actually enjoying the blue. Still, I reckon it's best to return to camp before someone stuffs a chair down my throat.

But there'll be no sleep tonight. The Queensland Fightin' Juice (otherwise known as Bundy rum) is flowing in rivers, car stereos pump at full noise and Steve Earl's 'Copperhead Road' is still on high rotation at 2am. Other noises ricochet in the valley, too. Small blocks, big blocks, supercharged Chevs, stroked Windsors and turbo sixes bellow into the night like a herd of Tyrannosaurus Rex roaring challenges to each other on some prehistoric battleground.

I manage to catch a couple of hours' shut-eye towards dawn, nodding off wondering how the utes (and myself) will cope with the grass events.

'Toss a Spud' is up first. Six 'gates' are marked out with Day-glo orange bollards, horizontally opposed at slight angles, meaning you need to reverse into every second gate. Beside each gate are two stacked tyres. The co-pilot holds six styrofoam 'spuds'. The aim is to get the spuds into the tyres; each miss means a time penalty, and the fastest total time wins. After the show's MC helpfully announces that I'm here representing Wheels magazine, I gun the VE into the first gate. My tosser duly misses (and later proves he couldn't hit the broadside of a barn with an HT sedan), so I grab reverse and hit the throttle ... only to completely misjudge the angle and leave us stranded halfway into the gate. The crowd erupts into laughter and jeers, my face glowing redder than a set of exhaust headers.

I avoid any more disasters for the rest of the course, but smooth it ain't, and my tosser hits just one solitary target. Our final time falls somewhere in the order of an Olympic marathon. Trundling over to the motorkhana course, I vow to redeem myself. This event is almost identical to the spud tossing, but minus the spuds and including a constant-radius circle halfway through the course, with the goal to do a lap as sideways as possible.

I manage to restore some semblance of credibility by nailing all the gates and hanging Kermit out in a languid dirt-churning drift. It's still not nearly the fastest time, but I'm feeling a little better and the VE's throttle response and crisp, tactile steering are impressive.

Now the Ford. Wheel-spinning off the line, I just manage to sneak into the second gate (kissing the left-hand bollard with the wing mirror), but from there the run is looking pretty good. Until gate four. I misjudge the angle (again) and we end up looking like a beached whale (again). And we miss all but one spud (again). The crowd thinks it's hilarious.

Onto the motorkhana in the Falcon, and things improve infinitely - meaning I don't make a total goose of myself. But the Ford feels noticeably nose-heavy compared to the Commodore, lacking the inherent balance of the Holden. The SS wins the steering battle, too, feeling sharper and more responsive.

When the pain finally stops and I can park both cars, the SS has taken a win in each discipline. And the VE has won more hearts among the Kandos punters. But according to Gazza from nearby Rylstone, there's only one competition that matters. "The burnouts, mate, the skids. It's all about who pulls the biggest skid. And the Commodore flogged the Falcon."

Clearly, the people have spoken. 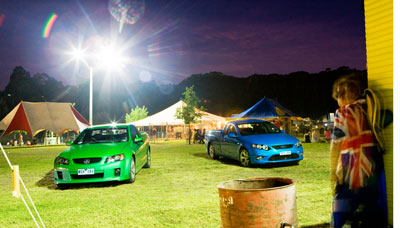 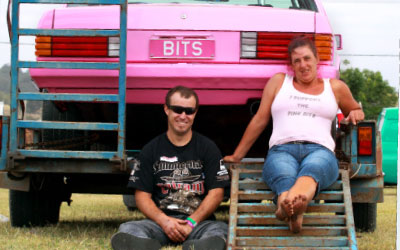 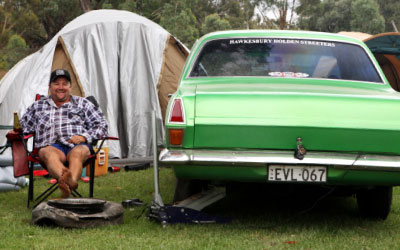