Australian engineering group Premcar has created a 320kW/700Nm weapon of a Ford Falcon XR6 Turbo, based on ex-police vehicles.

Using second-hand ex-police cars as a base, Premcar then adds adjustable suspension, jointly developed by Premcar and Melbourne firm Shockworks, along with 19-inch forged FPR TSW Wheels wrapped in Kuhmo 91S tyres measuring 245mm up front and 275mm at the rear.

A revised intake, free-flowing exhaust and tweaks to the engine calibration liberates around 320kW/700Nm from the 4.0-litre turbocharged inline-six, with an engine oil cooler and transmission oil cooler added for extra durability.

Formed by the group known as Prodrive Australia when the Prodrive company decided to exit Australia in 2012, Premcar offer engineering services in Australia and China.

Premcar engineering director, Bernie Quinn, explains the logic behind the new project: “We basically needed something for the guys in the workshop to do between projects.”

“New South Wales Police Packs cars get Brembos, bigger oil cooler and are quite inexpensive for what's in there. The police turn them over at 80,000km, they're still under warranty.” 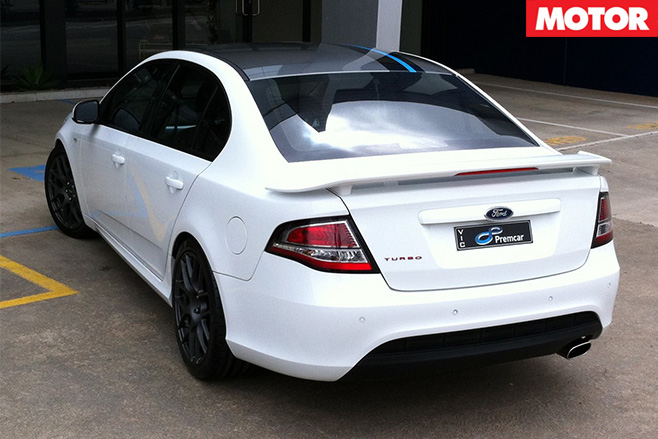 Having built a prototype vehicle, Premcar brought it along to a GT-F owners' night and sold three on the spot, cars that have just gone to their owners.

As they're based on second-hand vehicles, the cost of the Premcar Turbo is extremely low, with Quinn estimating the price at between $35,000 and $40,000 as a turn-key package, including the donor car.

The good news is that there is no reason why the modifications can't be performed to any XR6 Turbo, though using the ex-police vehicles as a base is the most cost effective way to do it.

Quinn is happy to accommodate individual owners' needs, though he admits he “hasn't fully worked out how we'd do the non-turn-key option.”

For Australian performance enthusiasts starved of fresh metal, the Premcar Turbo offers a massive amount of performance for the money, along with the peace of mind that it is developed by the very people that handled local fast Fords since the first Falcon XR6 in 1992.

We're itching to get behind the wheel and hopefully will have a road test for you in the near future.