Leaked earlier this week and now confirmed, a Ford GT Competition Series has been announced as a stripped-down, bare-essentials and track-focused supercar special edition.

In a lesson to all owners to read the handbook of their newly acquired sports car, the first GT owners this week discovered a reference to a Competition Series model in their glovebox book that described a manual-opening rear liftback among other race-spec details.

Ford has now officially revealed its head-nod towards track-day enthusiasts, with the aim of the GT Competition Series being to reduce weight positioned high in the vehicle and therefore lowering the centre of gravity. 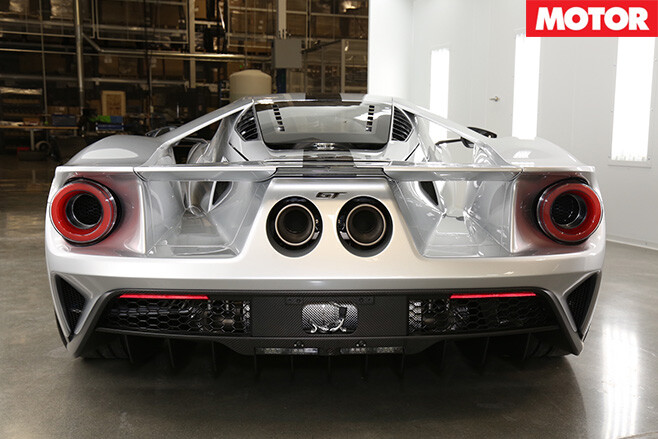 To that end, heavy old glass has been flicked for lightweight Perspex-acrylic on the rear liftback that now includes a manual opening latch and carbonfibre prop-rod, which “reduces weight near the roof and shifts the balance of weight lower in the car.”

Gorilla Glass is used for the bulkhead screen behind the driver, which Ford claims is half as thick and half as light as regular glass.

Active aerodynamics and an FIA-approved rollcage remain, but “items not essential to performance” have all been deleted, such as air-conditioning, audio unit, speakers, cupholders and storage bins. 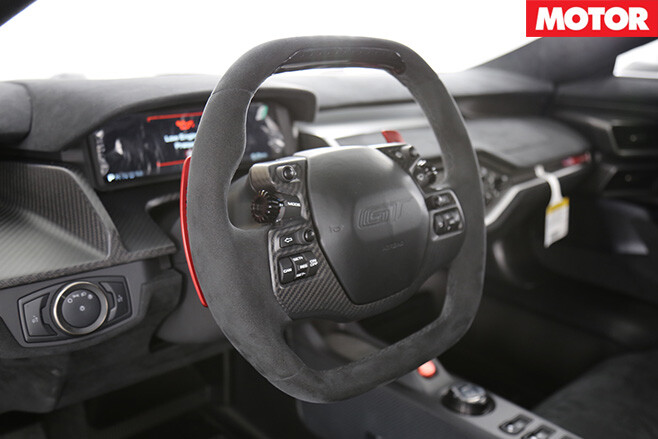 In their place comes a carbonfibre overload, with the wheels now made of the strong and lightweight material in addition to exposed lower exterior trim with matching gloss finish and stripe, mirror caps and A-pillars cloaked in the stuff.

Red paddleshifters and Alcantara headlining bring a unique touch to the otherwise spartan cabin of the GT Competition Series, teamed with special dashboard ‘plates’ – perhaps a euphemism for blanks – for the deleted steering wheel buttons and colour screen.

Black, white, silver, blue, grey and yellow are the only exterior colours available for what Ford executive vice president of global product development and chief technical officer Raj Nair describes as a limited edition “developed with the most hardcore track enthusiasts in mind, providing a tailored set of lightweight features and unique livery to match.” There’s no power hike for the 482kW/746Nm 3.5-litre twin-turbocharged V6 engine, nor details about how much weight the GT has lost from its already-petite 1363kg kerb weight. But Ferrari and Porsche rivals certainly are on notice.

Ford hasn’t directly revealed whether the GT Competition Series will be produced in addition to the 1000 units allocated over four years’ production – already twice the originally slated number and time. It only says the limited edition model “is available in North America for all announced production years.”