Devil in the detail with two-star Ford Mustang crash result

Ford Australia has responded to the Mustang’s dismal two-star safety rating as handed down by the Australasian New Car Assessment Program (ANCAP) this week, promising that fixes are on the way but also insisting its coupe remains a safe new vehicle.

Although Ford’s muscle car achieved just two out of five stars overall, its frontal-offset-crash adult occupant protection was rated 72 per cent, equivalent to a four-star rating.

Its pedestrian protection rating was lower at 64 per cent, its child occupant protection rating tanked at 32 per cent, while its safety assistance systems rated just 16 per cent by Euro NCAP, ANCAP’s global partner that crashed the vehicle overseas.

An updated Euro NCAP/ANCAP testing regime left the Mustang with zero points awarded due to a lack of autonomous emergency braking (AEB), active cruise control and steering wheel-activated lane-keep assistance; while the four-seat coupe was only awarded two out of three points for having front but not rear seatbelt reminders. 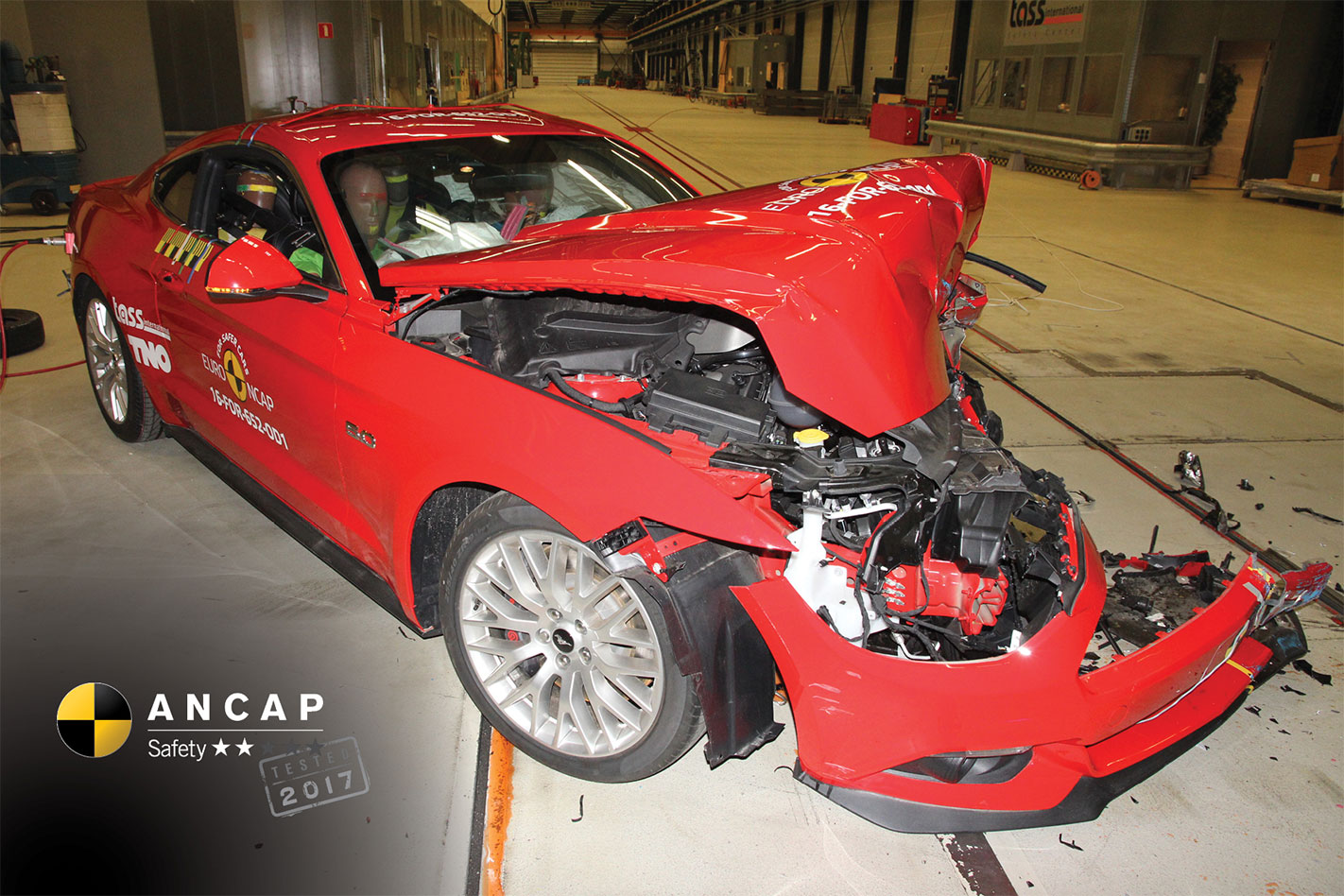 The lack of AEB even caused a drop in the adult, child and pedestrian protection outcomes.

“The overall Euro NCAP rating is based on four pillars, with a very strong focus on family car safety characteristics and specific safety assist features, which are usually not part of the standard equipment of cars in the Mustang category,” Ford Australia said in a statement.

Ford Australia added that Mustang fixes are on the way next year: “Ford is committed to continued improvement in vehicle safety, and the 2018 Mustang in Australia will be equipped with driver assistance features such as AEB and Lane Keeping Aid.” 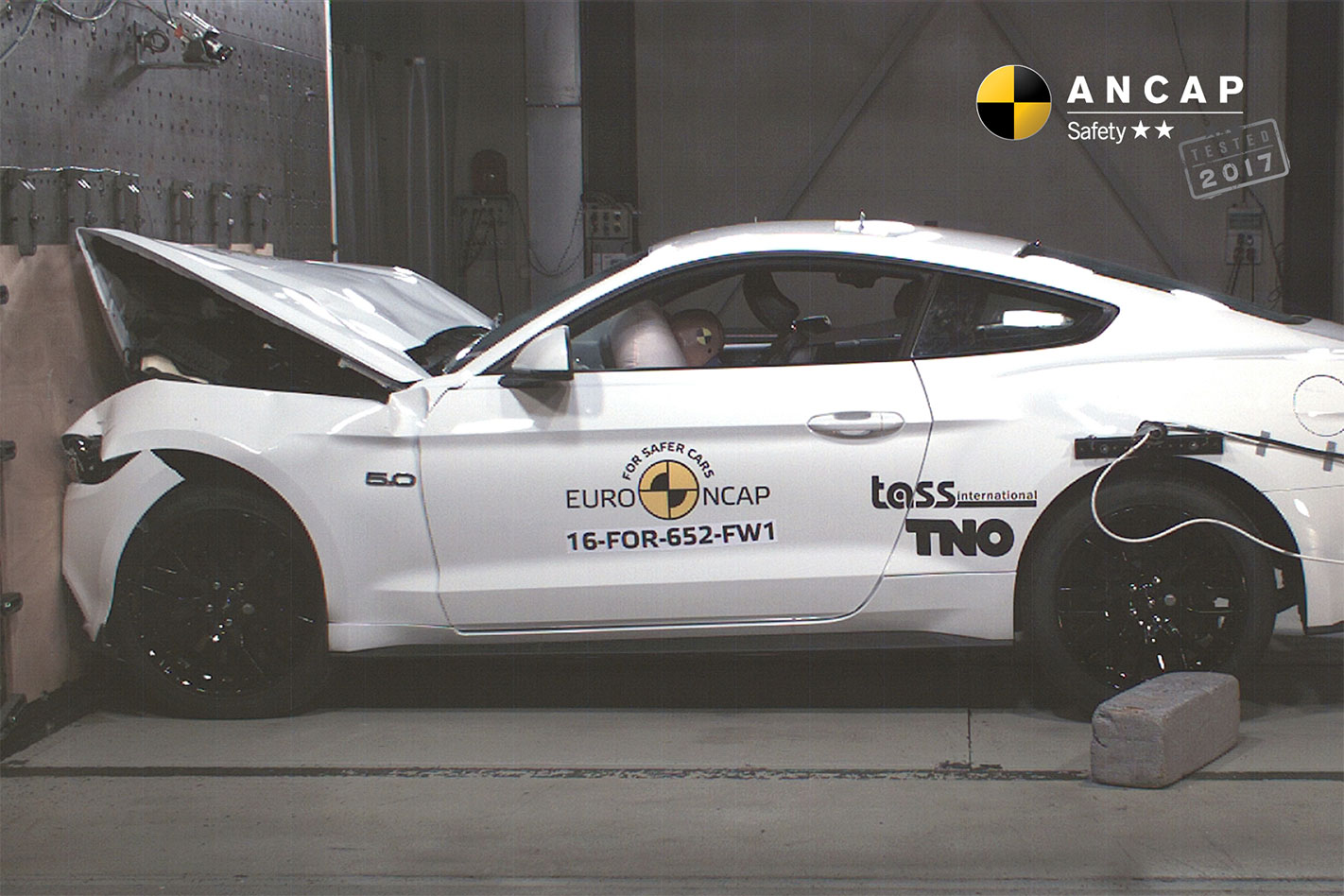 There were other issues that caused Ford to be “disappointed” by the ANCAP/Euro NCAP two-star result.

The testing regime found both the heads of driver and passenger to hit the dashboard owing to insufficient airbag pressure, although chest and leg protection was deemed solid.  The rear passenger slipped under seatbelts that lack pre-tensioners and load-limiters in a phenomenon called ‘submarining’, while forward head movement was deemed weak.

“The Mustang is a safe vehicle, equipped with advanced safety features and a structure designed to manage crash energy under a variety of crash modes,” the company insisted.

ANCAP chief exective officer James Goodwin disagreed: “The full-width frontal test showed a risk of serious head, chest and leg injury for the rear passenger. There was also insufficient inflation of both the driver and front passenger airbags in the frontal offset test which allowed the driver’s head to contact the steering wheel and the passenger’s head to contact the dashboard.” 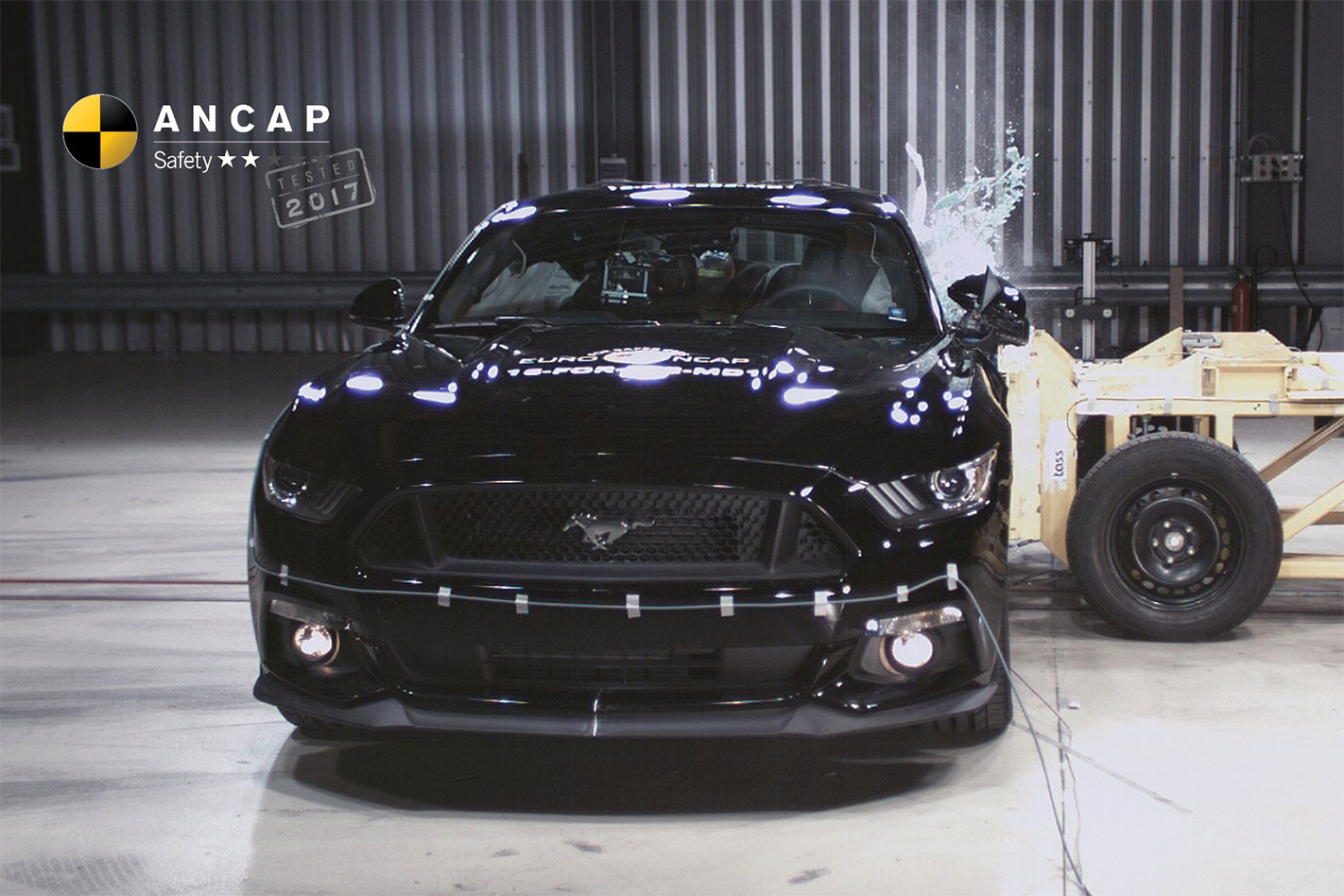 “The driver’s door opened in the pole test, and whiplash protection for rear-end collisions was marginal,” he added.

“This rating is not intended to shock or surprise – it simply presents the safety of this car against that of its contemporary competitors.”

However, it is rare for two-door, four-seat sports cars to have rear seat testing by ANCAP/Euro NCAP, with the likes of the Porsche 911 not having been tested. The only other four-seat coupe – the Toyota 86/Subaru BRZ – that has been tested by ANCAP, lacked a rear passenger rating or the active safety requirements set by the updated regime.

Asked whether Ford would like to see other coupes tested, it replied: “None of Mustang’s competitors (Nissan 350Z, Alfa Romeo 4C, BMW 4 Series) have been tested under this protocol so far. Some sports cars have been assessed according to previous protocols (Audi TT and Mazda MX-5 with four stars and BMW Z4 with three stars, all in 2015).”