Lighter, with more power and torque, and AWD availability.

Holden has confirmed it will offer its NG Commodore Sportwagon with its Australia-only petrol V6 and all-wheel drive powertrain that aims for Volkswagen Passat R36 grunt.

According to the brand it is “bringing sexy back” to wagons with the New Generation (NG) Holden Commodore Sportwagon unveiled overnight alongside its Opel Insignia Sports Tourer near-twin.

We say ‘near-twin’ because Opel versions will not score the 230kW/370Nm 3.6-litre V6 engine – an updated version of the VF Series II engine with higher outputs and cylinder shutdown tech – combined with a ‘twinster’ all-wheel drive system and nine-speed auto.

The highlight of the new Sportwagon design is arguably its sweeping silver roofline trim that extends from the A-pillar over its six-window design and intersects with the tail-lights. The line then extends into the concave and 3D-esque tail-lights themselves, which have more than a hint of Peugeot about them – arguably again, in a good way.

A wide and square number plate surround, meanwhile, is reminiscent of an Audi A6 Avant.

The tailgate also not only adds electric opening – a first for the nameplate – but additionally a ‘kick to open’ function, which allows a foot to be waved under the rear bumper, and a 40:20:40 split-fold backrest. 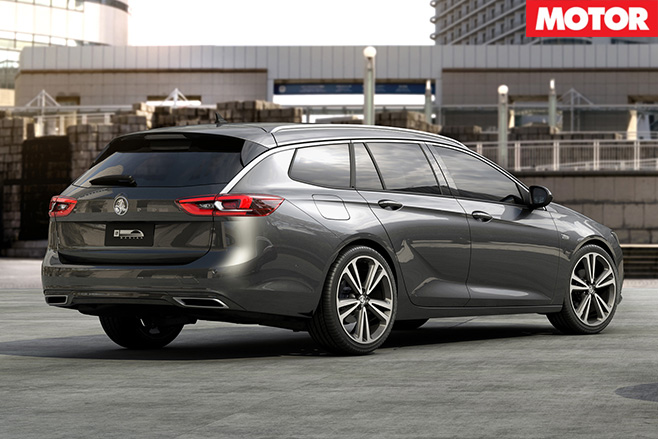 And of course all-wheel drive. According to details just released by sister brand Opel, the ‘twinster’ design “can apply torque to one or both of the rear wheels independently, enabling torque vectoring capability across the car’s full performance range.”

“When cornering, higher torque is sent to the outside rear wheel, inducing rotation around the vertical axis (yaw) – the Insignia turns in with more precision, responding more spontaneously to inputs from the driver.”

Apparently the twin-clutch (hence the name) differential-less design – the same as that used in the oversteer-able Focus RS – reacts with two driver-select presets, Normal and Sport, the latter prioritising “sportier behaviour.”

Holden is promising weight reductions of around 200kg on the switch from Australian-made VF Series II to German-built NG – from 1717kg to 1866kg to around 1517kg to 1666kg.

April’s Geneva motor show will mark the public debut of both sedan and wagon versions of the Insignia, giving us a first look at what will become our Holden Commodore in 2018.