Excess is relative. However, if Mercedes-Benz’s GLS monster SUV isn’t endowed with enough bling and opulence for you, then the Three-Pointed Star’s Maybach division has you covered with the GLS600. The Rolls-Royce Cullinan and Bentley Bentayga now have some high-rolling company.

The Maybach GLS600 prioritises rear-seat passengers and can be optioned with two leather-clad reclining seats (taking centre stage over the traditional rear bench). The executive-style rear seats gain a panoramic glass sunroof above for an airy feel, while there are two 11.6-inch tablets with MBUX to play with in the rear pews. The boot capacity is rated at 520 litres. 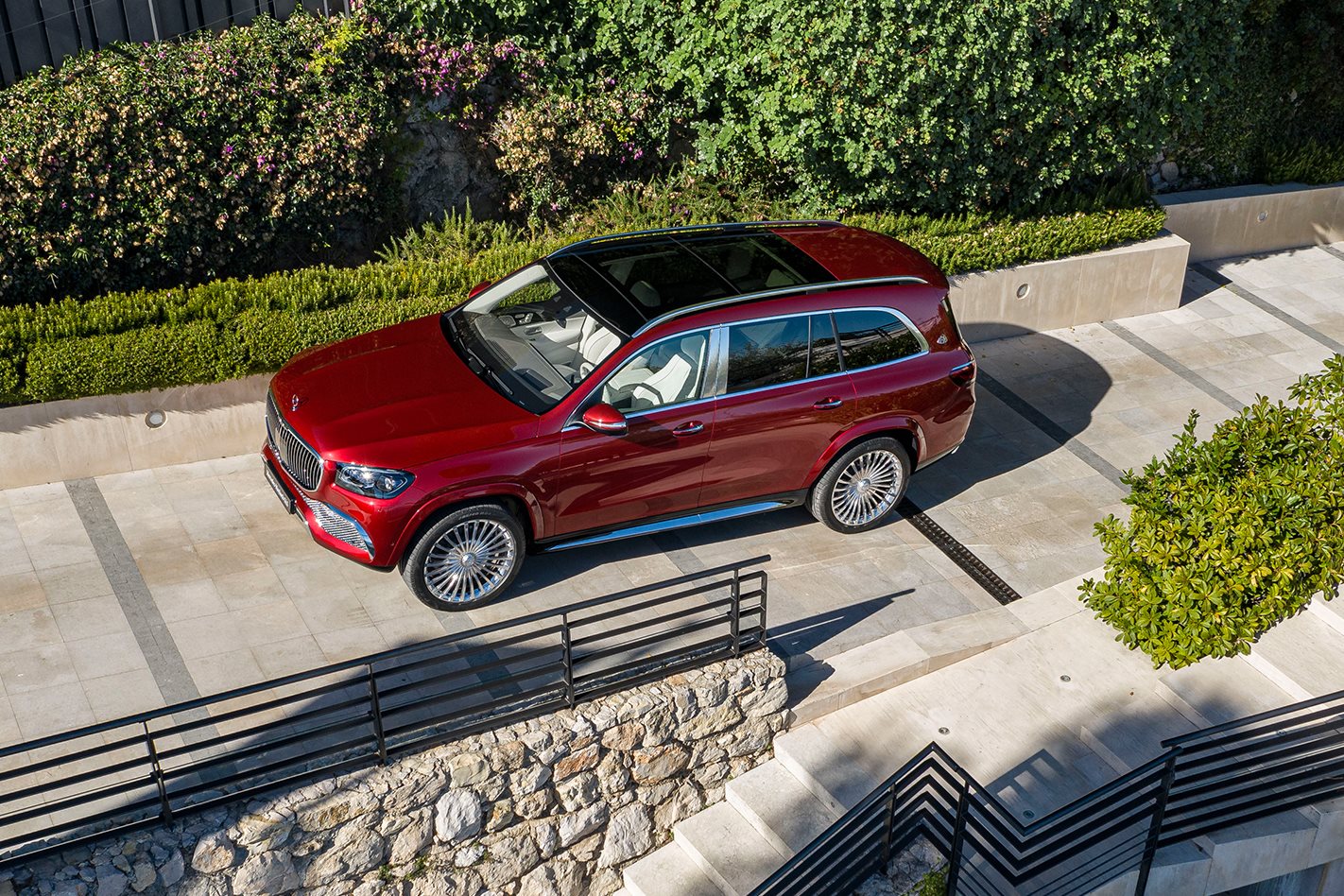 The Maybach gains top-shelf materials like nappa leather and real wood (which has been aged for at least 10 years) as well as design highlights tailored to luxury and comfort. Everything inside has a hand-crafted attention to detail. Extensive mood lighting (there are 64 colours to choose from), two high-resolution 12.3-inch touchscreens (featuring MBUX) and appealing graphics enhance the cabin ambience.

A Maybach-specific exterior feature is the two-tone paintwork, which is available in seven colour combinations. The GLS600 rolls on 22- or 23-inch wheels, while extra chrome ‘bling’ has been added to the styling to fit with the upmarket Maybach image. 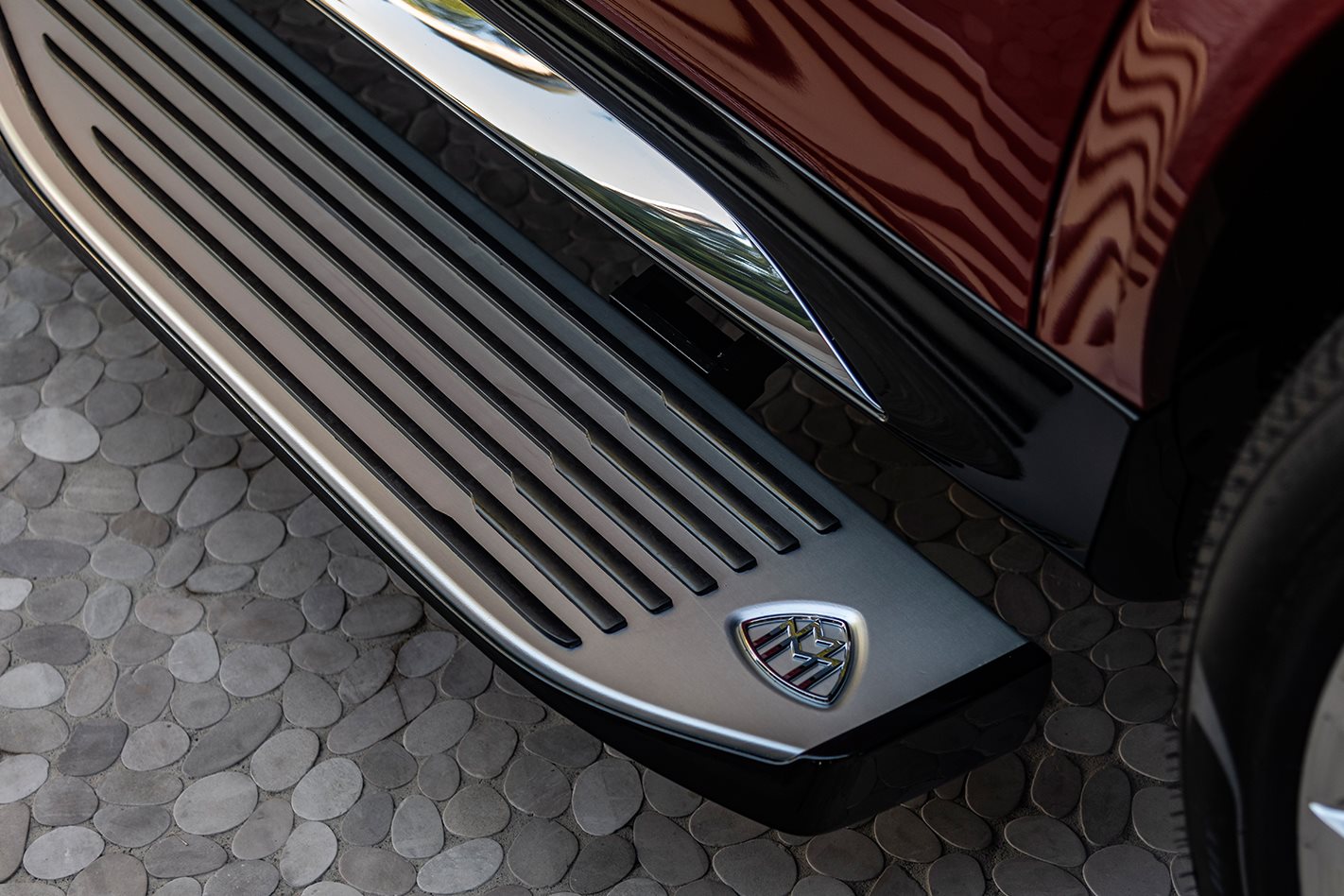 Find the GLS body style too high and too difficult to get in and out of? Don’t worry, there are 2.06m running boards down both sides that electronically extend and retract to aid access to and from the lavish cabin. They are illuminated for vision and covered in black rubber for purchase. They don’t ruin the overall aesthetic as the running boards retract behind the sill panels (or extend out) in around 1.5 seconds. Amplifying the level of luxury is the fact that the air suspension can be lowered 25mm when a door is opened. Once inside, space is hardly at a premium with a wheelbase stretching more than 3.1m. 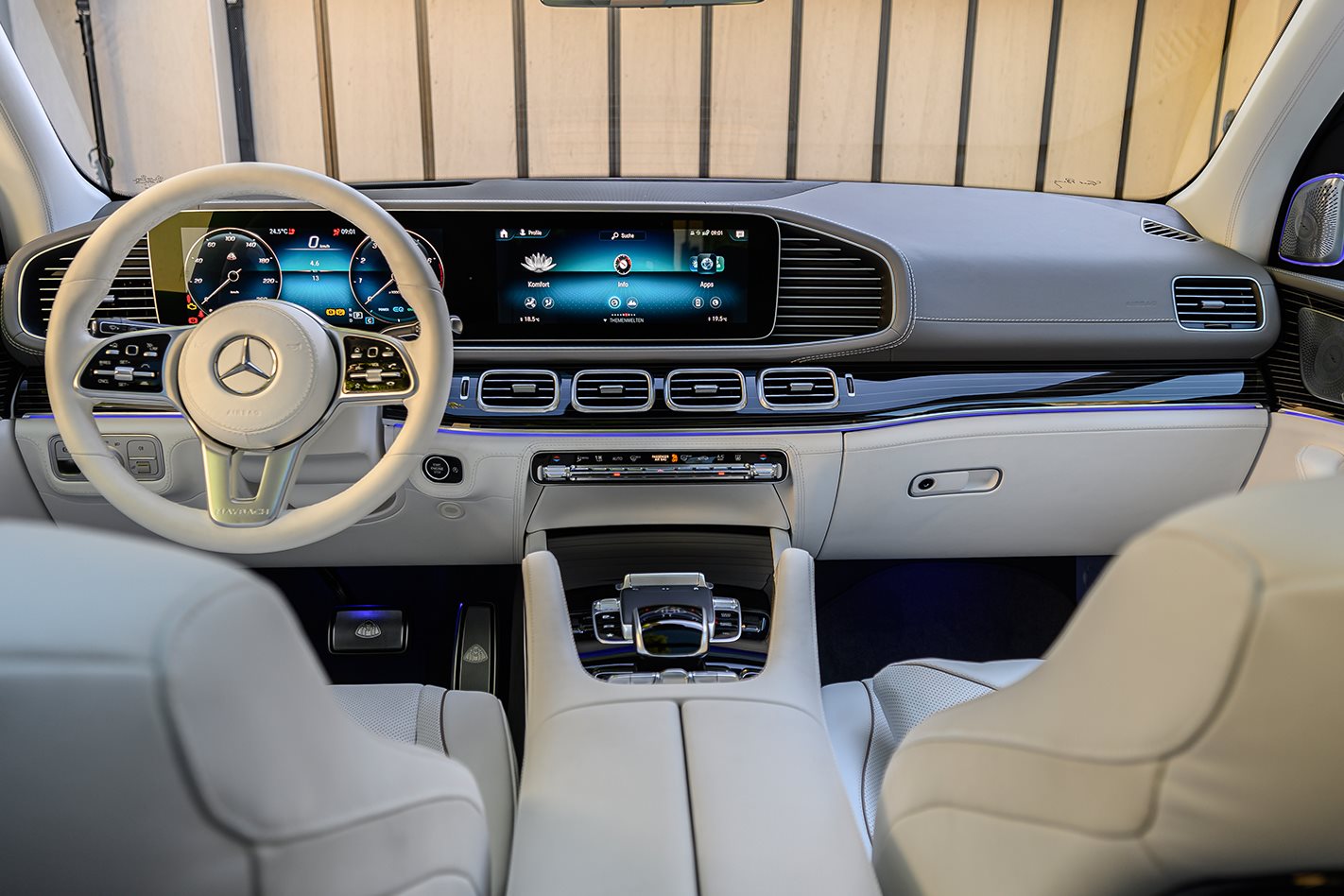 The Mercedes-Maybach GLS600 also ties Benz’s EQ Boost system to the venerable bent-eight (as seen in the high-performance GLS and GLE variants). The 48-volt system is charged with 16kW and 250Nm, which can be accessed temporarily in conjunction with the conventional combustion engine. Drive is, as you’d expect, sent to all four wheels and torque can be distributed from 0-100 percent between the axles. A 9G-Tronic nine-speed transmission is called upon to change gears. 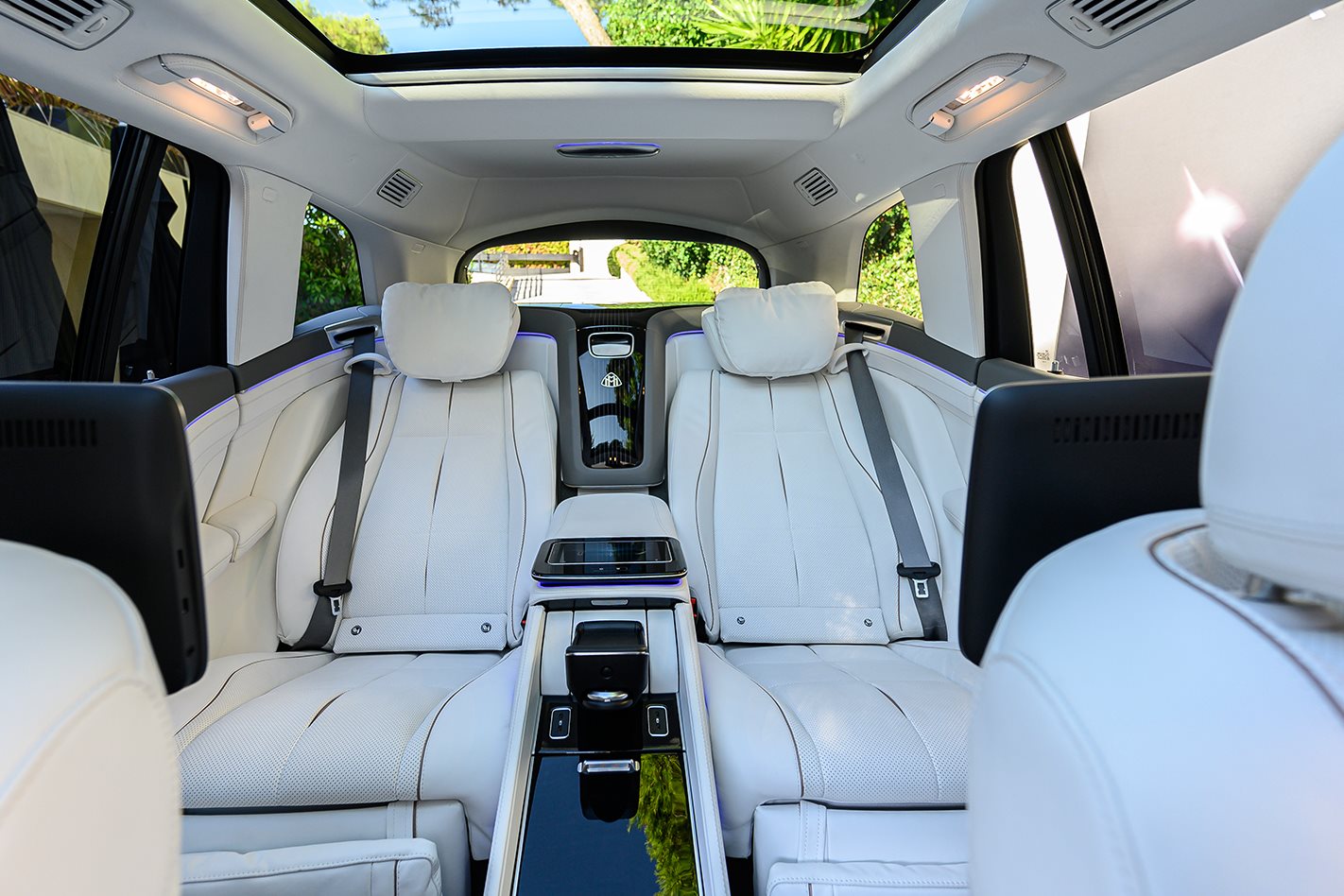 Of course, it’s not just the interior that’s plush, with the GLS600’s ride quality set to offer ‘S-Class waft’ with standard air suspension and adaptive dampers. E-Active Body Control taps into the 48v electrical system to quell body roll, meaning the Maybach SUV should remain flat while cornering to increase passenger comfort. The big GLS also scans the road ahead for potholes and readies the suspension to cope with it. 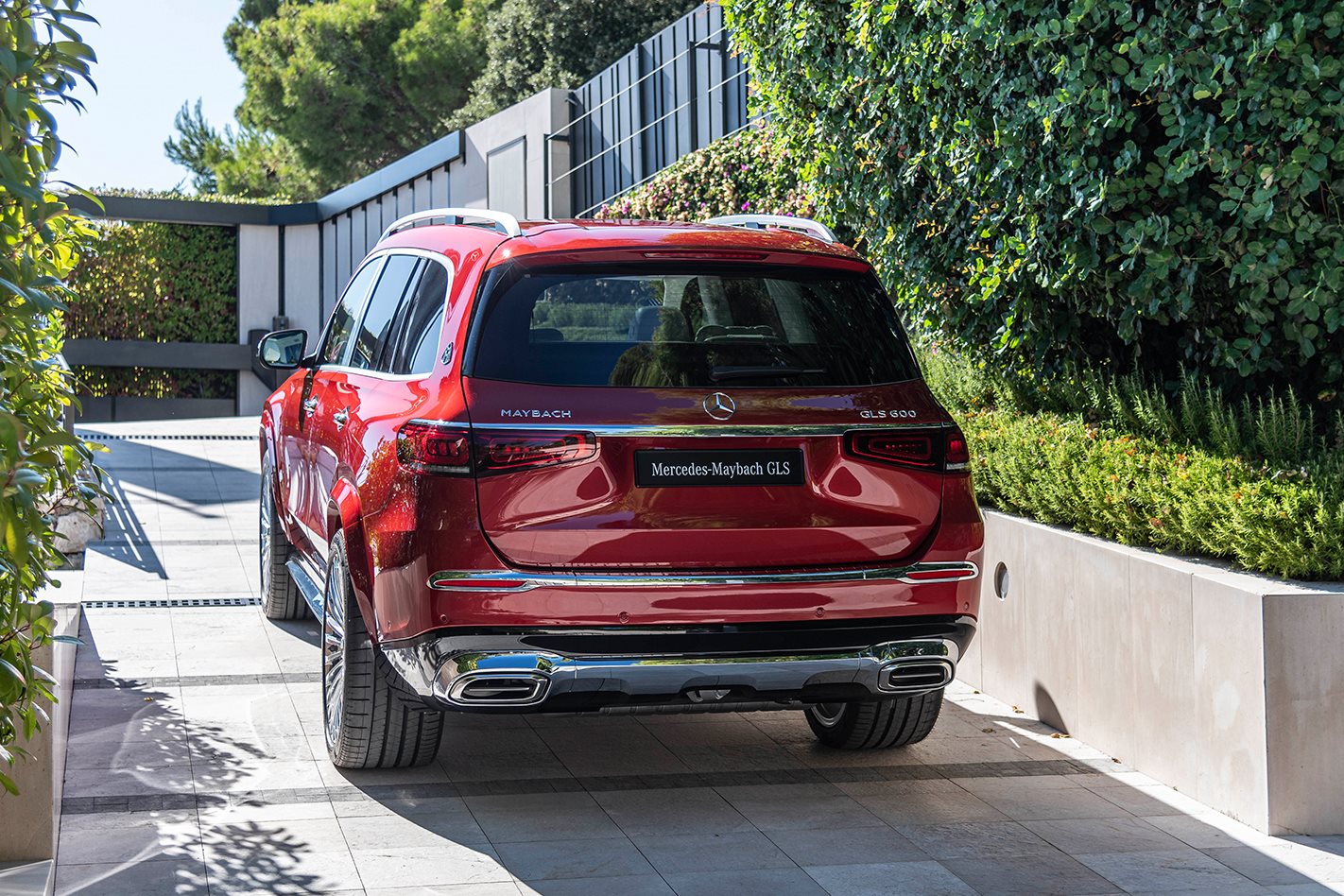 More than 45,000 units of the Mercedes-Maybach S-Class have been sold worldwide since its inception in 2015. And in an SUV-loving market, that Maybach GLS600 should eclipse that figure. Comfortably.