McLaren’s fastest road car yet to drop in early 2018

CURRENTLY, there are just two ‘Ultimate Series’ McLarens, the fabled P1 and the track-only P1 GTR.

But a new generation of Ultimate Series creations is almost upon us, with the Woking manufacturer confirming its most ‘track-focussed’ road car is due to be released in the first quarter of next year.

The shock news of a fresh McLaren hypercar coming within six months will have millionaires (and billionaires) the world over scrambling to phone their accountants in order to find the extra cash – it’s not going to be cheap.

The new vehicle doesn’t have a name yet, but McLaren says the Ultimate Series addition’s mission “is to be the most extreme, track-concentrated road car McLaren has yet designed.”

The ‘road car’ qualifier in that statement allows McLaren some wiggle room on whether this will be the outright fastest McLaren built to date, as the P1 GTR (which currently holds that title) is a track-only beast.

It’s also been announced that the mystery McLaren hypercar will arrive ahead of a second Ultimate Series model, the McLaren BP23.

Designed as a spiritual successor to the McLaren F1, the BP23 has the same three-seat layout that puts the driver smack-dab in the centre of the cockpit.

McLaren is billing the BP23 as the world’s first ‘Hyper GT’ designed for crossing continents at face-warping speeds but remaining comfortable for passengers - not so much hot lap glory.

While the next Ultimate Series car is pitched as the “ultimate track car”, McLaren states it will remain road legal - just don’t expect it to be comfortable enough for regular trips to the shops.

“Daily usability is being sacrificed to give the most intensive driver experience around a circuit,” the press release states.

“Its design, described as brutal, will be the purest expression yet of the company’s ‘form follows function’ philosophy.”

So we can expect a race car with lights and indicators, and not much else.

More details, including the car’s official name, will be released before the end of the year. 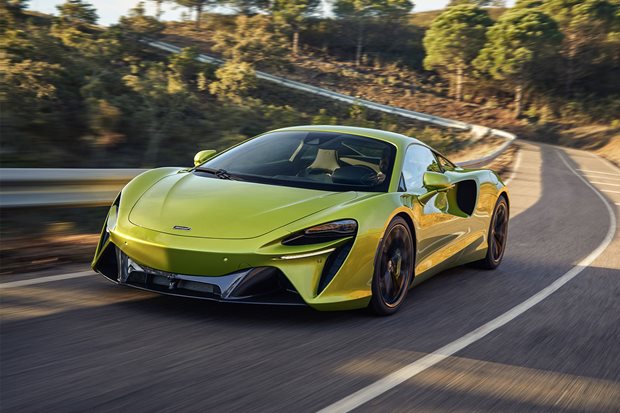