That Ferrari you bought cheaply off the internet? It may not be what you think it is

PSSST! Wanna buy a cheap Fezzer? Didn’t even have to fall off the back of a truck?

Sorry, but thanks to the fast-moving investigative skills of the Spanish police, you may have missed your chance. They’ve just busted a gang for the second time in five years that specialises in turning boggo passenger cars into Ferrari-badged knock-offs and selling them to unsuspecting punters.

According to the Spanish police, the gang was busted earlier this week, and was in the process of transforming 14 “mid-range cars” into highly desirable super sports cars.

The gang allegedly planned to sell the cars via the internet. Some had already been listed online as second-hand vehicles even though they were still a work in progress.

Police said the investigation into the fake supercars kicked off after it became aware of “a vehicle that simulated the appearance of a sports car of the Ferrari brand infringing the industrial property rights of the aforementioned brand”.

“The agents also located the clandestine workshop ... where they found 14 vehicles in different degree of transformation. Four of them were several Ferrari models already ready for sale,” police said.

One of the items seized was a complete blank for the body of a V8-engined Ferrari F430, a mid-2000s coupe and convertible worth more than $200,000 second-hand.

The gang appears to have sourced a number of donor cars to run underneath the fake skins. These range from what looks like a V6-engined Ford Mondeo to a Pontiac Fiero and even a mystery Peugeot.

The trickery didn’t just relate to fairly recent prestige models, either; at one point the vision cuts across a complete outer-skin cast of a Dino, a car potentially worth $500,000 – if it’s the real deal. 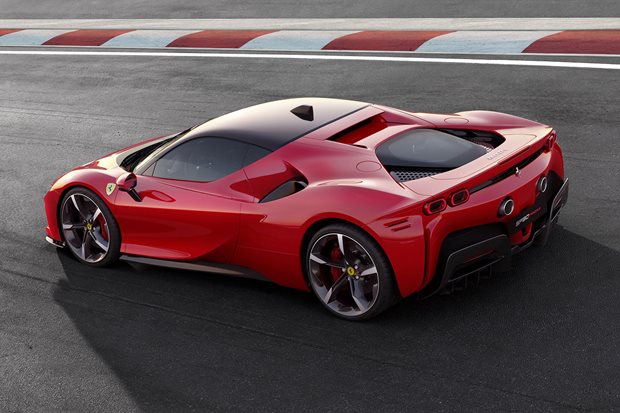 Ferrari's first-ever plug-in hybrid is also the company's fastest-ever road car, but the SF90 Stradale is also something else.