Tesla’s all-electric ute is still some distance from the showroom, but Australian tradespeople are already showing keen interest in the idea of a combustion-free workhorse utility

WHEN Tesla mastermind/CEO Elon Musk revealed his “Masterplan Part Deux” for the exclusively electric brand in July last year, in amongst the broad goals of introducing solar roof tiles and battery-powered semi-trucks was a promise to debut an all-electric ute.

There’s nothing more diametrically opposite to the luxury-segment Tesla Model S and Model X that currently make up Tesla’s entire product offering than a commercial-grade utility, but that’s the point – Tesla wants to diversify beyond making electron-burners for the filthy rich, and a ute is the perfect way of expanding its product footprint.

It’s also a great way to make money. What was the top-selling car in Australia last year? The Toyota HiLux. Travel across the Pacific to the ‘States, and you’ll find the Ford F-150 brings home the most bacon. Humble workhorses are what the working-class everyman wants.

And apparently more than a few Australian tradespeople specifically want their utes to run on battery power, according to Tesla’s local operation. Speaking to Wheels, Tesla Australia’s head of public relations, Heath Walker, said Musk’s plans for a ute had so far generated significant local interest. 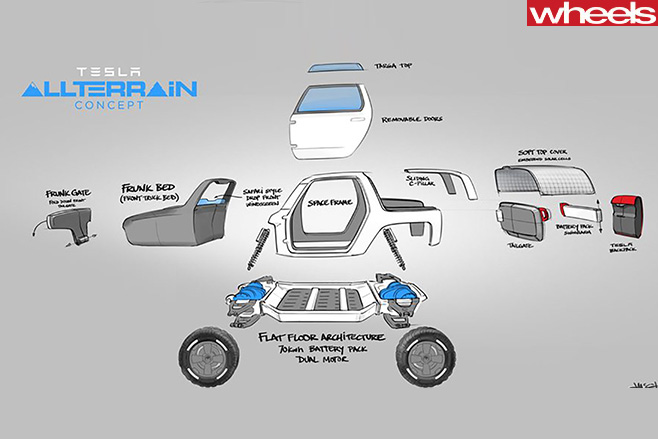 “It’s certainly exciting because I think this market is very similar to the US and there’s a huge [ute] uptake,” Walker said to Wheels.

“All you need to do is look at the number-one selling car of the last twelve months – that’s the model type. It’s certainly a segment that we need to move into.”

“The nice thing is, looking at our social media commentary, we actually get that request quite a bit,” he said.

“There’s a lot of local tradies saying ‘can you build a ute, because I can actually charge up on site while I’m doing work’, and the convenience factor for them, in addition to Australian’s taste for performance vehicles, means this car would have the crossover appeal to cater to that.”

Tesla remains tight-lipped on actual details of its eventual utility, with its present priority being bringing the Tesla Model 3 medium sedan to market. The revenue generated by that car will be critical to Tesla’s success as a car maker – and to the viability of any future Tesla vehicles, ute included. 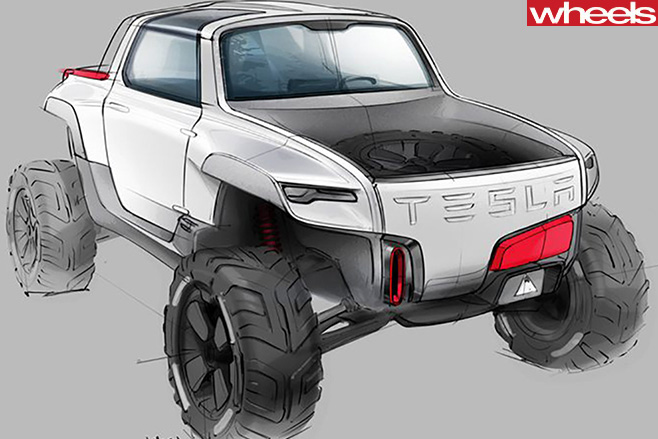 For one, electric motors generate massive torque from zero RPM. You know what torque is used for? Towing heavy things. Tradies like to tow heavy things, ergo, mega low-down torque seems like a handy thing for them to have.

Furthermore, the flexibility afforded by a combustion-free configuration means Tesla could tailor its ute’s form around its purpose. With no bulky turbo-diesel engine up front, the cab could be positioned further forward to enable a long truck-like load bed. Remember the VW Kombi ute? Tesla’s own load-lugger could look similar.

The ‘Tesla Allterrain’ concept art (pictured), penned by former Tesla intern Jason McGinnity, shows another design direction, with an open “frunk bed” effectively doubling the load area available. All of the electric gubbins are shoved under the floor, as it is in the existing Model S and Model X, with chunky off-road style suspension affords it a go-anywhere capability.

Design is all speculative for now, but looking at the sales figures of what does and doesn’t sell in this country, it’s clear that if EVs ever become truly mainstream it’ll probably be when Tesla’s ute arrives on our shores.