Slated for a full reveal at January’s 2016 Detroit Motor Show, the updated flagship 911 is faster than before but also more fuel efficient. And no, it’s not called the ‘turbo Turbo’, following the updated 911 Carrera getting turbocharged engines across the range. It’s still just ‘Turbo’ with a capital T, thanks, and there are two of them on the fastest-accelerating 911 of the updated range. 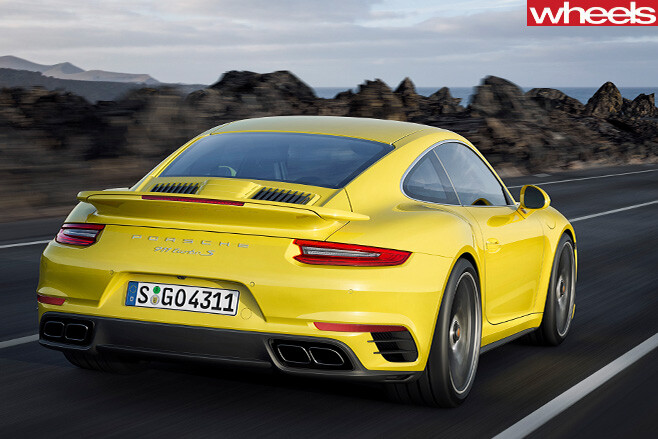 The 3.8-litre flat-six gets a 15kW power nudge, which translates to a 397kW figure for the Turbo, and 427kW for the Turbo S. Bearing in mind that, historically, Porsche acceleration figures have been underestimated, perfectly achievable and repeatable, the Turbo’s 3.0sec 0-100km/h claim and 2.9sec effort for the Turbo S are outstanding. There’s no need to quote faster times with the Sports Chrono pack, either, as it’s standard on both models. Top speeds are 319km/h for the Turbo, and if you mate has one, buy the S and they’ll eat your dust as you power to 330km/h. You’ll also get ceramic brakes on the S.

Porsche says that the extra grunt comes from new cylinder heads, fuel injection nozzles and higher fuel pressures. There are also larger turbochargers, as well as a new dynamic boost function that maintains boost during ‘load changes’. For instance, during a brief throttle lift-off, boost is maintained by leaving the throttle valve open, which means that there’s no lag when you get back on it, according to Porsche.

Select Sport and Sport Plus, and Porsche says this is even more pronounced. There’s a new feature included in the drive modes, too, called ‘Sport Response’. It acts like an overboost or a ‘push-to-pass’ switch that provides ‘rapid acceleration’ for up to 20 seconds. It can be used as often as you like, and in any drive mode too. The PSM also has a new Sport mode, but of course you can completely disable it as well – if you dare.

If you’re looking for a pragmatic reason to trade your old 911 Turbo in, fuel consumption is even better than before, with a 9.1L/100km claim (Euro cycle) for the Turbo, with the Turbo S a tad thirstier at 9.3L/100km. Tell your accountant those numbers.

Outside, to let the economists in silver base Carreras know that you’re actually into fast cars, the Turbo features its trademark rear wing, body addenda and larger polished 20-inch alloys, which are half an inch wider than before.

There’s also the same modest changes given to the recently updated 911, including a new rear engine cover and wrinkles near the LED headlights, as well as flush door handles. Turbos also have ‘air-blades’ and dual tail-pipes to confirm that you’ve just been passed by the flagship 911. 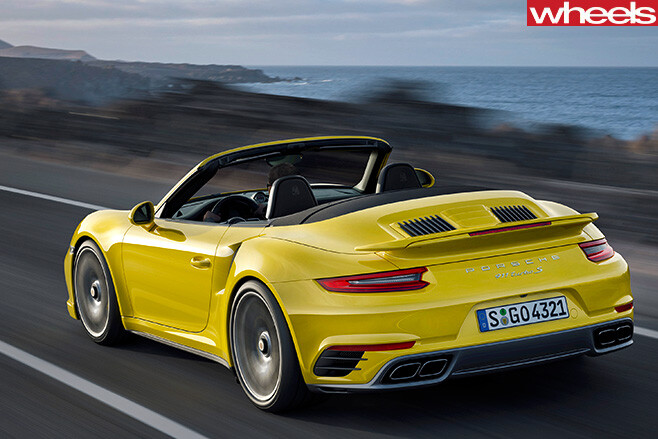 Every Porsche seems to come with the 918-inspired steering wheel these days, which we love, while there’s a new glass touchscreen in the centre console that can now handle hand-writing recognition. In a car like this, we reckon you’ll forget that it has a BOSE audio system standard as you carve up country roads and listen to that flat-six cackle instead.

The 2016 Porsche 911 Turbo and Turbo S arrive in Australian showrooms in May.