A Toyota 86 Racing Series will kick off next year at V8 Supercars rounds, with young guns battling it out for a $125,000 prize pool.

The series announced by Toyota Australia is tagged as a “grassroots category designed to discover new motorsport talent”. Fittingly, the Japanese brand’s entry-level sports coupe is being used in a competition that will cost “anyone with the passion and talent to compete” just $1500 per round.

That’s in addition to the approximate $35,000 it will cost to transform the 86 (that teams need to BYO) to control specification, which is being finalised by the Confederation of Australian Motorsport (CAMS).

Following rounds that align with the V8 Supercars calendar at Sydney Motorsport Park (August), Sandown (September), of course Bathurst (October) and Sydney Olympic Park (November) among others, the winner will take home $50,000 cash plus a $20,000 “international VIP experience”.

Second place nabs $30,000 cash and third place half that amount. 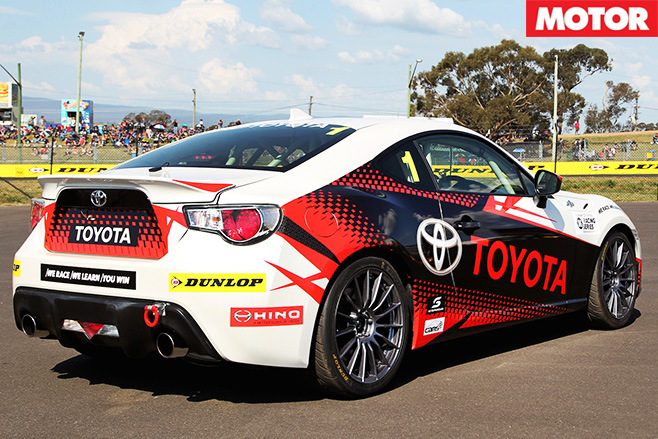 Toyota says the series aims to discover the next generation of racing legends, using as examples the discovery of Mark Skaife and Tony Longhurst as young guns competing in a one-make racing series.

“Drivers will perform in front of substantial race-day crowds and large TV and internet broadcast audiences, which should assist them gaining sponsors.

“If there’s another Skaife or Longhurst out there, we’ll find them!”

Toyota expects the front-engine, rear-drive 86 to max out at 230km/h down Conrod straight at Bathurst, the expected highlight for each of the 32 drivers participating in each round of three 20 minute races (one on Saturday, two on Sunday, with grids determined by two practice sessions and a qualifier).

The series entry is the lowest of any mainstream national series and will therefore be the cheapest ticket to racing at Mount Panorama.