I LOVE camping. Whether I’m sleeping in a swag, a tent, a camper trailer or the back of a 4x4, there’s nothing quite as liberating as getting out there and enjoying the great outdoors.

Every time I prep myself for a camping getaway, my mind’s eye is always focused on the perfect trip: a pretty sunset, a roaring fire, some juicy steaks, a few chilled beverages, some laughs with good mates, a clear night sky littered with stars, one tall story after another, a ripper sunrise, a freshly brewed coffee, and sizzling bacon and eggs for brekky.

Of course, the reality of camping is that it doesn’t always pan out the way you think it will. After all, there are many variables, most notably inclement weather, which can always put a damper on any camping trip.

The first time I did the ‘big lap’ of Australia with a few mates back in the ’80s, I remember almost being washed out of the tent in Townsville when a river of water rushed through it thanks to an early morning downfall. Sleeping on an air mattress, I didn’t wake up until there was so much running water that I began to float. By the time I was alert enough to realise it, half of my body had already exited the tent.

Since then I’ve slept in plenty of leaky swags and tents, but with a bit of preparation – selecting the correct campsite, setting up a tarpaulin, pegging-down properly – I have never again been washed away.

On a recent trip to the NT’s spectacular Red Centre we copped a bucketing as we neared Rainbow Valley, our planned stop for the night. As the only visitors brave (stupid?) enough to be out there in the rain, we had plenty of space to set up our swags on the campground’s undercover tables, so we managed to stay out of the rain. With a bit of liquid accelerant we even got a fire going, although we used the facility’s gas barbecues to cook the pre-striped sausages we’d bought earlier that day in Yulara.

In fact, it was those dodgy looking snags – not the torrential rain – that would prove to be my undoing that night.

Then there was the time I camped in a thunderstorm out at Rob Emmins’ Melbourne 4x4 Training & Proving Ground at Mount Cottrell. The tent I was in had an external aluminium frame and I was almost certain I’d be struck by lightning that night. I wasn’t, and the tent proved remarkably waterproof despite the conditions. Nevertheless, I didn’t get a hell of a lot of sleep. 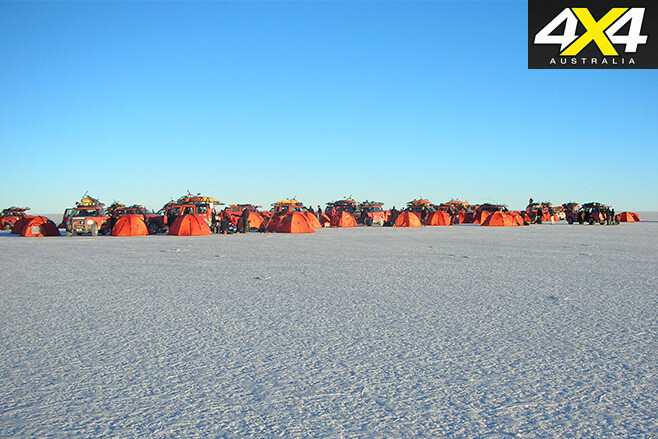 Without a doubt the most uncomfortable camping I’ve experienced was on a Land Rover G4 Challenge trip to Bolivia. In fact, it was like the perfect storm. I had grievances with the weather, the altitude, the campsite, the tent, the food and the ablution facilities.

While it wasn’t raining, it was extremely bloody cold. So cold, in fact, that several layers of clothing topped off with one of the puffiest of puffy jackets didn’t stop the shivering in the sub-zero temperatures. As for the altitude, we were situated on the 10,582km² Salar de Uyuni, the world’s largest salt lake, which sits 3656m above sea level.

As I’d only just arrived in the country I hadn’t the time to acclimatise, which made it awfully hard to breathe the thin air. Then there was the campsite; have you ever tried to pitch a tent and then find a comfortable sleeping position on the rock-hard surface of a frozen salt lake?

And the orange G4 Challenge tent was the silliest thing I’ve ever tried to erect, especially when wearing thick winter gloves.

The food and the ablutions deserve their own note. Put simply, we were fed spotted dick out of a bag. The main courses were also in a bag and included casseroles and curries that we would heat on the exhaust manifold of a Discovery TDV6. And when it was time to process said ‘food’, we would have to line up at the dunny tents with our own poo bag, which was designed to fit over a fold-out seat. The instructions were quite simple, but something must’ve been lost in translation with some of the trip participants because several people neglected to fit said poo bag before crapping on the dunny seats.

Did I mention worst offence? There was no beer on that first night!

Despite the conditions, I look back on that trip to Bolivia fondly. Sure, it remained cold for the rest of the trip, and we drove to even higher locations resulting in a decent bout of altitude sickness, but it was a once-in-a-lifetime opportunity to explore a wild and spectacular landscape with some good mates, and I will never forget it. The fact we found a local willing to sell us plenty of Bolivian Pilsner helped, too.