It’s a bit of a shame, really. The new BMW Z4 M Roadster is, in all honesty, an absolute ripper of a car, so more’s the pity that you’ll more than likely never give it a start in your list of cars you must own before shuffling off this mortal coil.

This article was first published in MOTOR's June 2006 issue.

Why all the negativity? Well, at the same time as BMW foist upon us this most lovely of playthings, it’s busily putting the final touches on a pair of cars that will, according to Those That Know, position the bar just that little bit higher; the V8 M3 and the Z4-based M Coupe. And while the bread-and butter 3.0-litre Z4 is, as a basic tool, far better than the Z3, it hasn’t exactly ignited blazes of pure unadulterated lust amongst guys like you and I, has it? Midway through the lifecycle of BMW’s open-top two-seater, and against all early indications from head office, BMW has served up a tempting little morsel of a motorcar. Some 85kg lighter and 200mm shorter than an M3, it has the same headkicking powerplant, big-arse brakes and – this is the best bit – a six-speed manual gearbox.

It’s not just an engine bolt-up job, either. With the upcoming Coupe in mind, the Roadster sports completely revised front and rear suspension, M3 CS-spec brakes and a subtle yet highly functional body makeover. This includes incorporating a trick reprofiled underbody to clean up airflow under the car and to direct cooling air to the M Diff, as well as a more aggressive front valance, complete with brake cooling ducts. 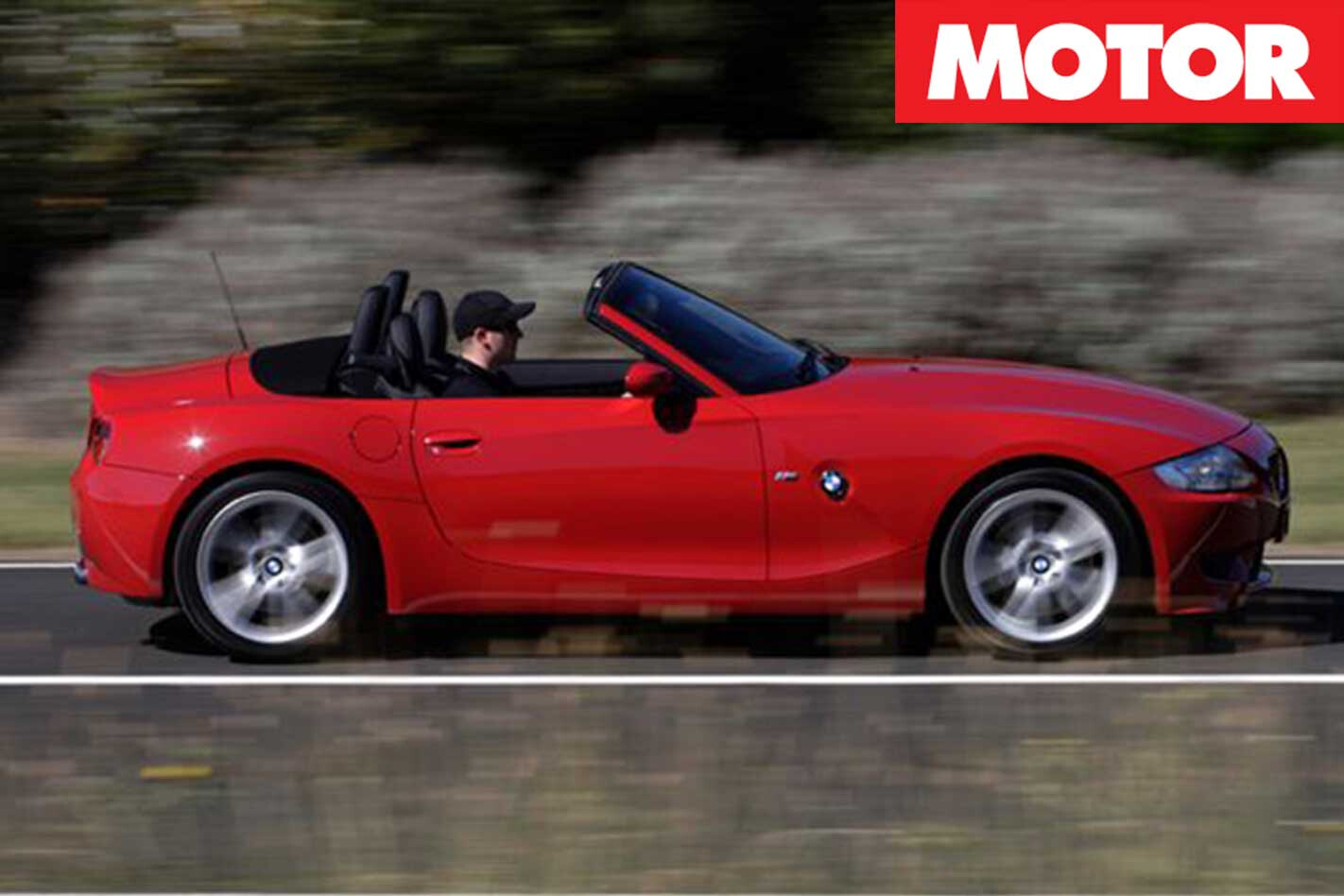 The MY06 facelift provides the new taillights and headlight treatment, with the M scoring Bi-xenon headlights as standard kit. The M Roadster is only slightly different in appearance to the cooking model – blacked out roll hoops and front grill, a deeper front bar and, of course, those quad exhaust pipes make up the majority of external changes, along with five-spoke 18-inch rims. 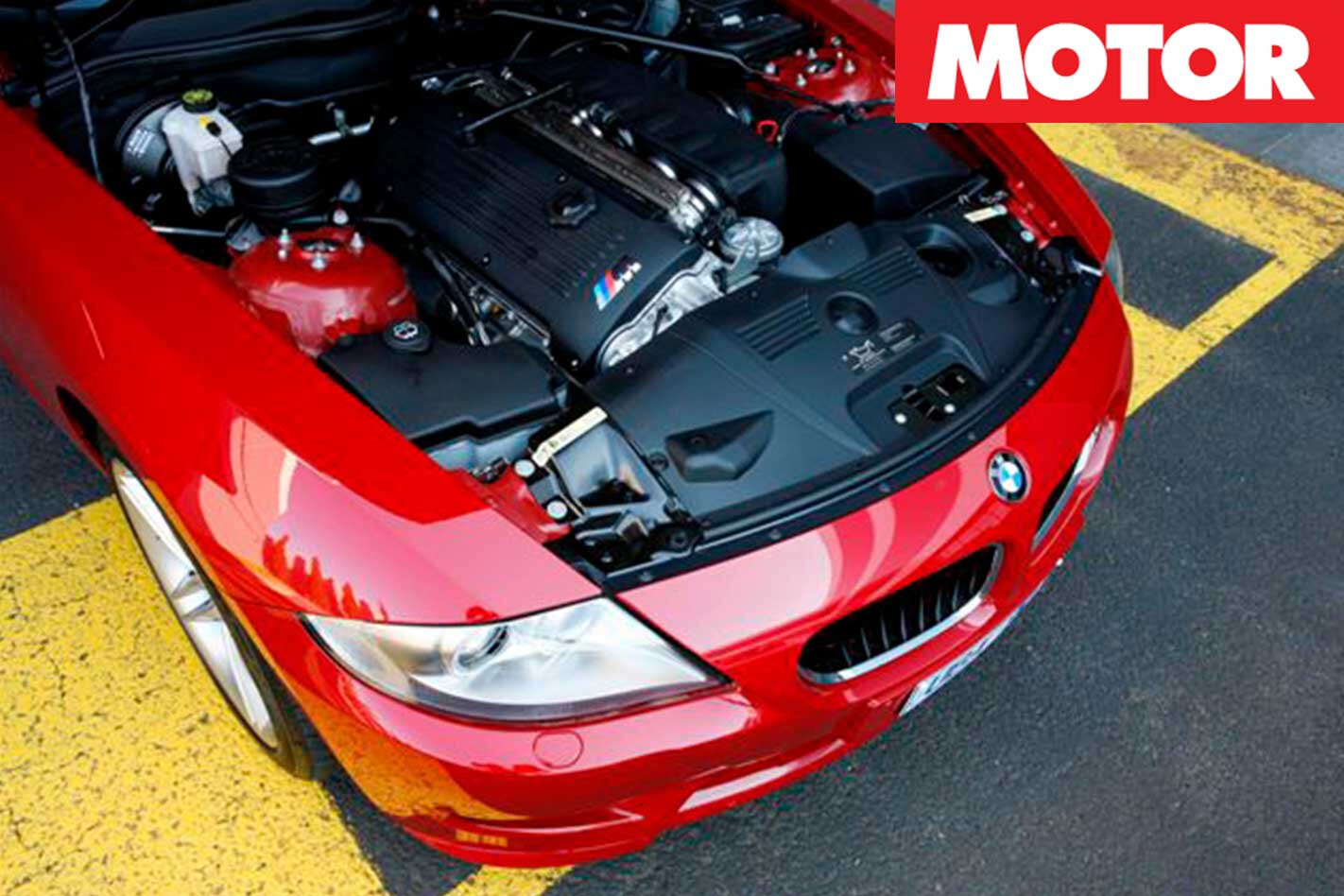 If anything, the Z4 M is a marvellous way to really savour one of the greatest engines of our generation. With the roof up, it’s little more than a quick two-seater; sharp handling, quick enough, but not all
that engaging. Bung the roof down, however, and you’re instantly subjected to a wall of symphonic mechanical yowling that sets hairs on end and dogs running for cover. The quad pipes a metre behind your head also come into play, producing an intoxicating cocktail of mechanical mayhem that you’d have to be deaf not to revel in.

With the Sport button switched on, throttle response is as sharp as Cockburn’s specially cellared Stilton, and it’s a do-before-death experience to roost hard in second gear with the roof off. 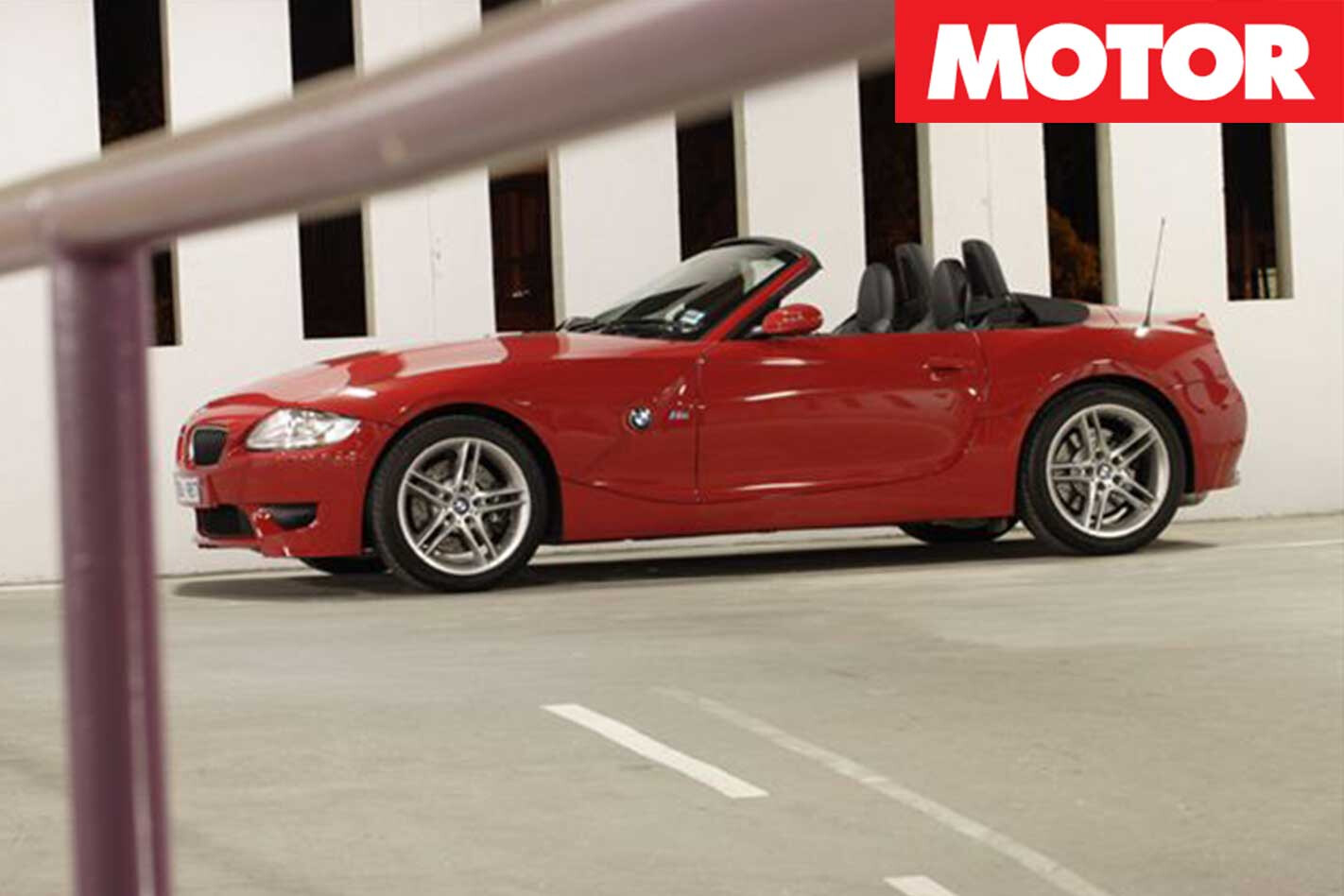 It’s a while since we’ve sampled the best six-potter in the world mated to a manual gearbox, and it’s a combo that absolutely kills any notion that SMG is the preferred option for serious drivers; don’t  forget, we spent a bit of time with the SMG-equipped M3 CS last month. And even though BMW sells more than 80 percent of its M3s in the semi-auto configuration, it doesn’t and it won’t show up in the
Z4 M. Why? The SMG box is essentially a manual gearbox hard-wired for electro-hydraulic operation, and it’s the hydraulic bits that won’t fit inside the transmission tunnel.

The interior is a bit of a halfway house between E46 and E90, and with no iDrive wheel in sight, the centre console-mounted switchgear seems to work just fine… The M Sport seats are ultra comfortable for
long hauls and are adequately supportive, but miss out on the side bolster-inflation devices of the 130i and 330i. With the blanks for bolster control cut into the seat base, it’s an omission that doesn’t make a lot of sense. The pews are slung very, very deep in the chassis, making for an excellent seating position when combined with the small, chunky steering wheel, a slicker-than-slick gearshift and a sublime set of well-weighted and spaced pedals. The white-on-black tacho lowers its redline according to engine oil temperature, and the DSC button has two modes; all the way on, and all the way off.

The M Roadster is lively, eager and a damn good giggle on tight, chopped up bitumen. It’s a little hesitant to take its set unless initial inputs are firm and decisive, and it’s a tough step to take to trust a short-tail roadster, but it’s worth the committment in this case. There’s plenty of mechanical grip on offer at both ends from the ‘regular spec’ tyres, BMW choosing not to equip any of its sportys with run-flat tyres. Coincidence? The car’s fitted with a low-pressure warning system and the rims will hold a deflating tyre firmly until the driver gets it sorted. 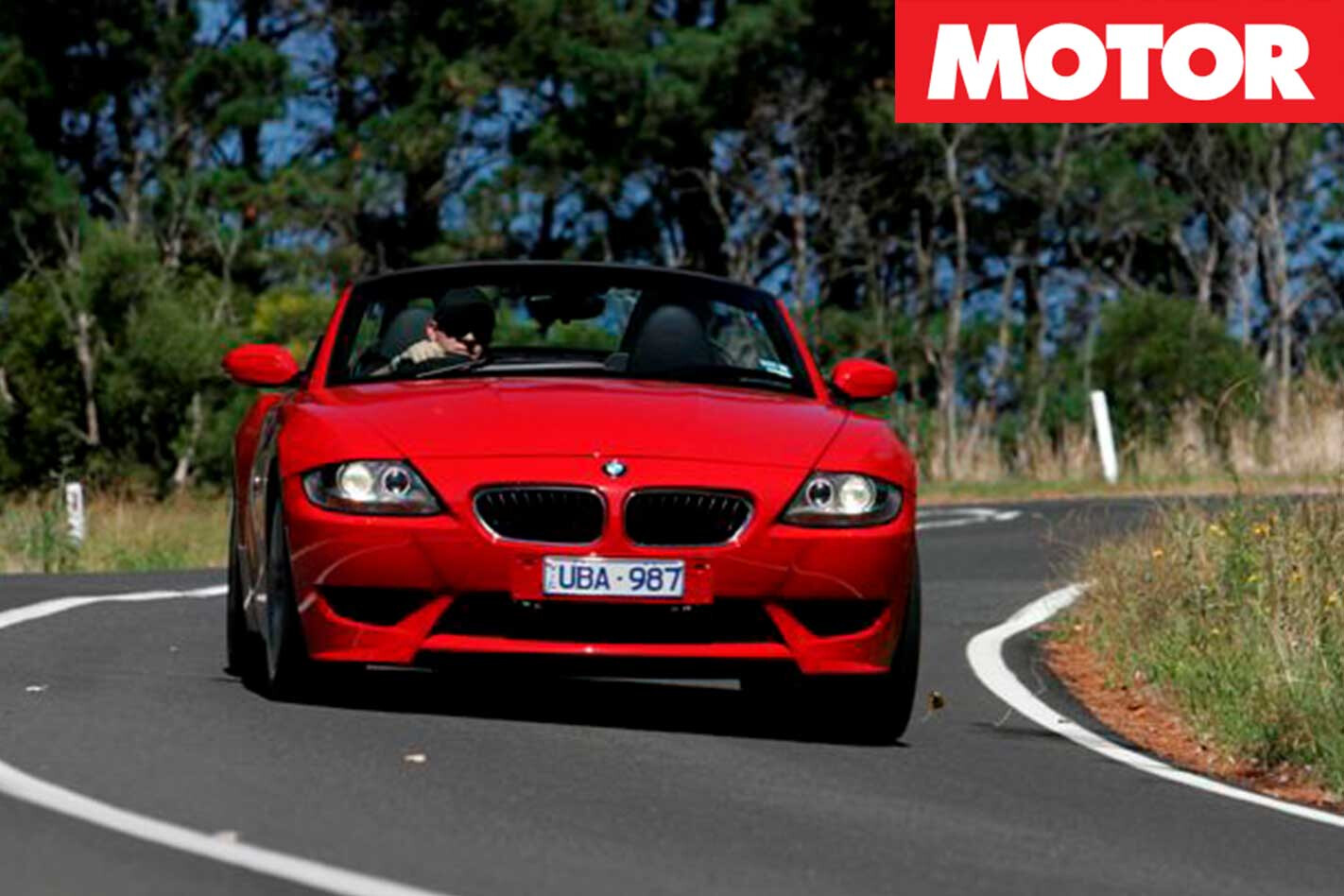 Based on a top-notch, impressively twist-free chassis, there’s only a tiny bit of scuttle hum on pimpled tarmac in evidence, and you really have to look for it. It does a good impression of a hardtop coupe, too, with a ten-second, fuss-free fold-up roof action that, thanks to its lining and heated glass, isolates occupants from most road noise. But with the alloy-framed roof stowed, the M Roadster is an engaging, willing accomplice to backroad shenanigans of the highest order.

As with all M cars, the Roadster does away with the electric steering setup of the lower end cars and adapts a quicker-geared hydraulic rack and pinion assembly. It’s not a class leader in steering feel, but it’s not bad by any means, with plenty of bite, sufficient if hazy feel and feedback and reasonable weighting. The two-piece brake rotor set-up is brilliant, too, with a firm, feelsome pedal that hangs in for the long haul.The rear end’s behaviour is exemplary, especially considering the short wheelbase/rear drive combo that has the potential to bite the inexperienced hard. Supple yet stiff, it’s possible to tweak the tail out with the throttle, the rear talking to you clearly and concisely all the way through. S2000-scary? Not even.

The viscous fluid-driven M diff is the secret spice in the pie, its clever combo of shear pumps and a multi-plate clutch maximising the potential of the robust chassis tune. Yet it retains an aura of competent security, not needing to intimidate to impress. Is the M Roadster better than a M3? In some ways, yes.

It’s eminently more emotive than the iconic two-door – it’s the most emotionally involving BMW of recent years, yet it’s nothing like hard work. Want the best six-banger in the world in a chassis package that’s truly worthy of it? Don’t overlook the M Roadster.