If you’re going to call your child Michael Jordan, Muhammad Ali or Donald Bradman, you bestow upon them a certain expectation of sporting prowess.

So it is with the E46 M3 CSL, which revived a famous moniker that adorned one of BMW’s most iconic touring cars. The E9 CSL earned the nickname ‘The Batmobile’ for its wild wings, so BMW courted controversy in applying the badge to the relatively unadorned E46. Finally, all luxuries are deleted, there’s an aluminium bonnet, thinner rear glass and lightweight wheels. Further lightening came via the owners’ wallets, the 23 CSLs that landed locally (from a total of 1383) wearing a $68K premium at $210,000.

The car’s mechanical specification received similar attention. Outputs increased by 13kW/5Nm thanks to angrier cams and the gaping cold-air intake, while the steering ratio was quickened from 15.4 to 14.5:1, the suspension stiffened with larger anti-roll bars at both ends, front brakes enlarged, aluminium rear control arms solidly mounted and new ‘M Track’ mode stability control program installed, activated by the sole button on the Alcantara-shod steering wheel. 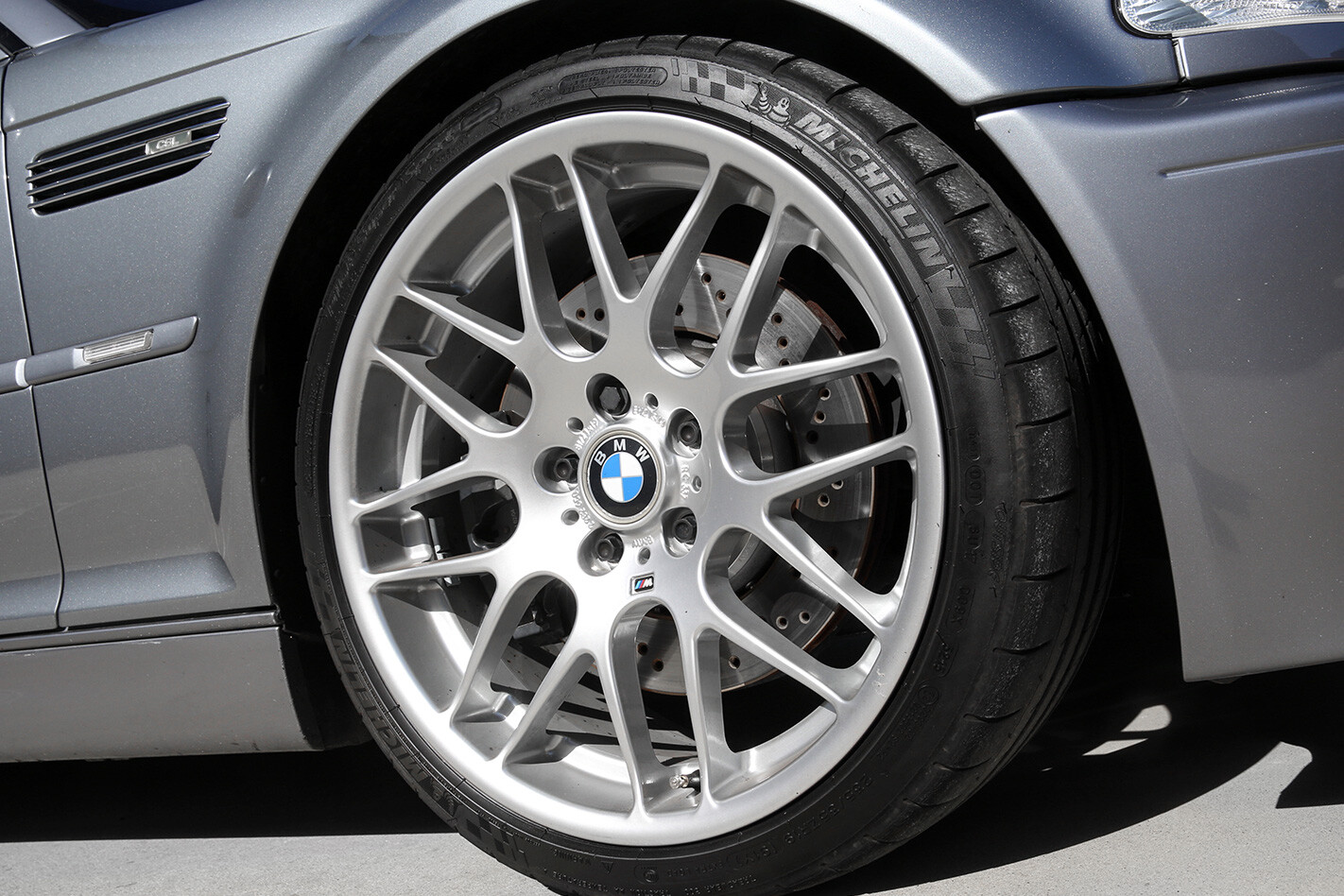 The CSL’s trump card, however, was its rubber, semi-slick Michelin Pilot Sport Cups, tyres so extreme owners needed to sign a disclaimer saying they understood the rubber wouldn’t work if it was cold or wet. On the plus side, if you produced a CAMS licence BMW would up the speed limiter to 280km/h.

These tyres were a key contributor to the E46 CSL’s jaw-dropping circuit pace; at Eastern Creek, BMW claimed the CSL was seven seconds faster than a regular M3.

Around the same track in the hands of MOTOR’s Dean Evans, the CSL bested the Porsche 911 GT3 by almost two seconds, and Cam McConville outpaced the Lamborghini Gallardo around Winton by half-a-second at PCOTY 2004, though the Italian reversed the order when it came to the final placings. By far the most contentious feature of the CSL was the take-it-or-leave-it SMG gearbox and it dates the car badly today. Perversely, it’s okay around town or on a five-tenths cruise, but at full noise the shifts are brutally, wince-inducingly harsh. As ever, you can smooth the shifts by lifting the throttle, but if you’re going to do that, why not have a manual?

Apologies for the sexual imagery, but if the sound of an E46 CSL coming towards you at full noise doesn’t arouse, check your pulse, you might be dead. 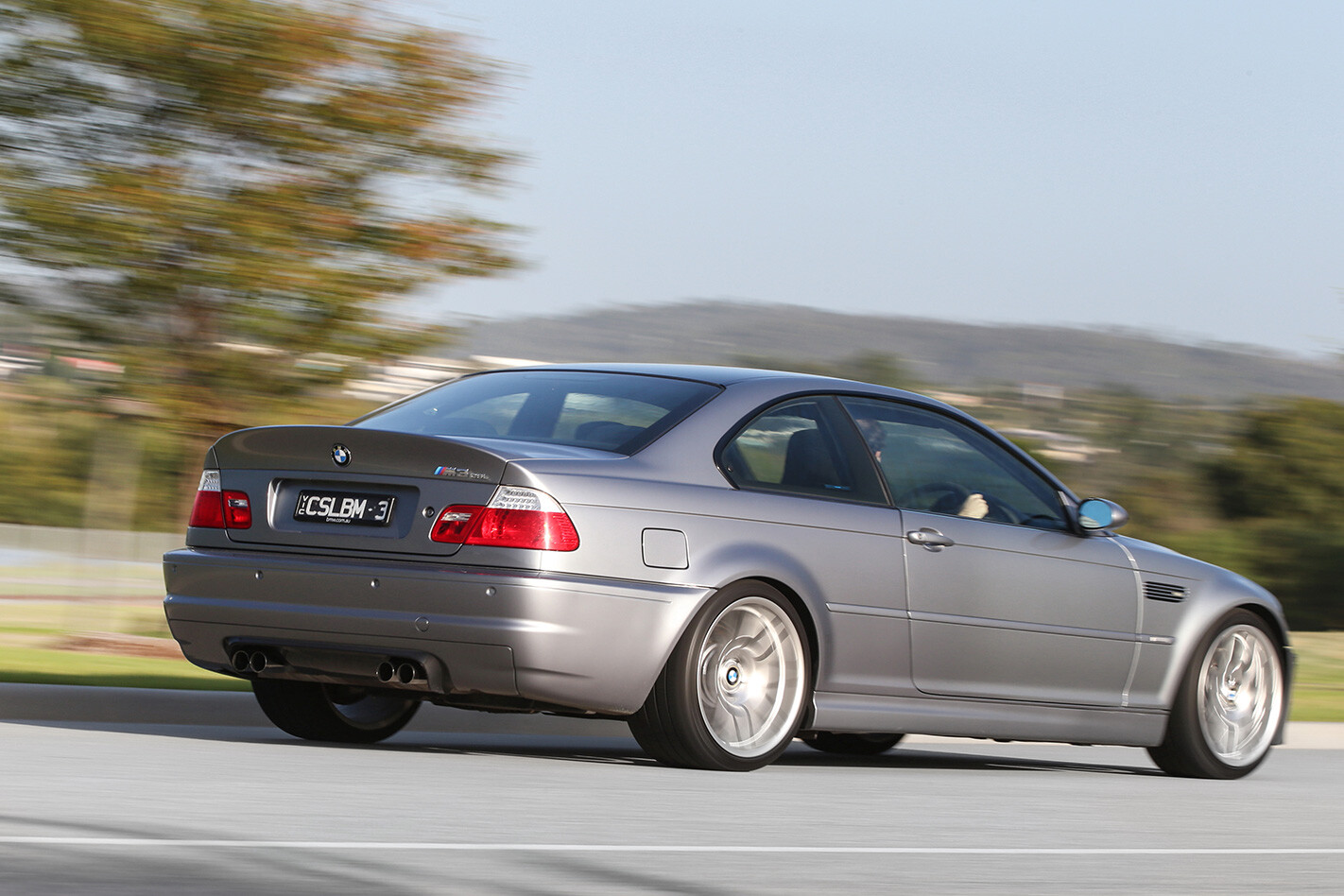 This CSL – BMW’s own, and the very car that secured that PCOTY second place – no longer wears its tricky tyres, which if anything improves it. Without the Cups’ limpet-like grip, there’s oversteer on demand in slower corners, and if there’s an easier car to slide than an E46 M3, I’ve not yet driven it.

The steering is a bit mute, but the CSL is a superb driver’s car, unbelievably pure with the pace to keep modern hot hatches honest.

If you can find an E46 CS, which scored the CSL’s brakes, steering, wheels and ESP, while keeping the option of a manual gearbox, buy it before prices go berserk. You won’t regret it.