This review was first published in MOTOR Magazine's January 2013 issue.

Especially roundabouts. On one of those grey rainswept Autumn days the homeland of Shakespeare and Jack the Ripper is notorious for, we went roundabout chasing in the new Aston Martin Vanquish. Really. 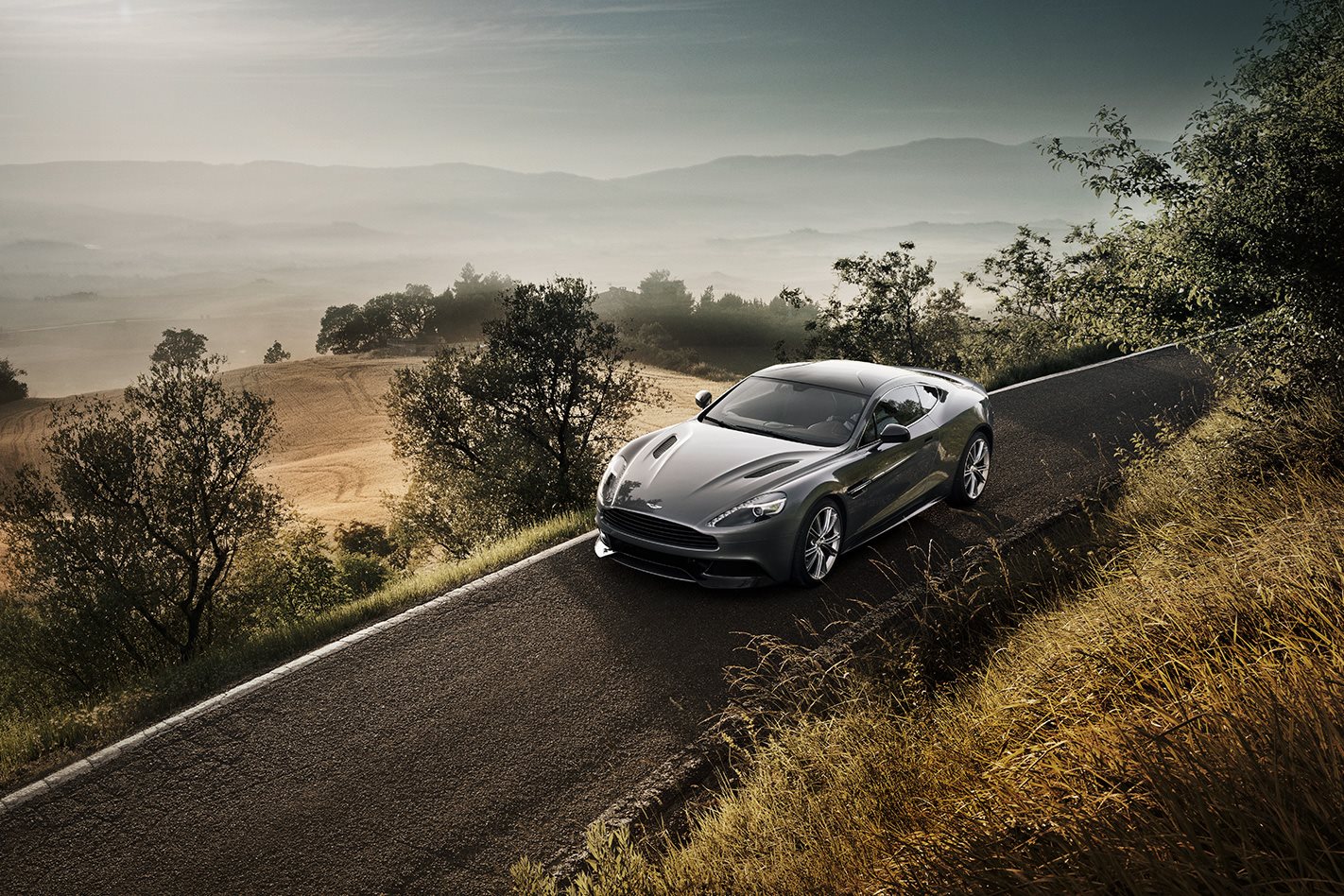 The oval-conquering procedure goes like this: First, you take a slow lap to check out the radii, the surfaces, the traffic situation and the eventual presence of ‘gatsos’, as stationary radar traps are called in the UK. Next, you switch the dampers and the engine/gearbox calibration to Sport and go for a couple of warm-up stunts.

As soon as the blood contains enough adrenaline to neutralise caution and concern, it’s DSC off, and whoopee!, the silver racer morphs seamlessly into hooligan mode, using up more tarmac than it is due, burning rubber even in dense English drizzle.

The Vanquish costs about a four-hundred grand more than a Toyota 86, but it displays the same lurid sideways antics. Not surprisingly, it is even more fun to drive than the Japanese sportscar. After all, the mighty 5.9-litre V12 shovels up to 620Nm of torque to the transaxle transmission which has no mercy on the 305/30 ZR20 Pirelli P Zeros.

Although the footwear is not of the super-sticky shaved Corsa type, some roundabouts were actually lined with black marbles after no more than half a dozen hot loops. If you believe that the DBS is an intoxicating drive, then the Vanquish is a hard-core prescription drug. Like a split-cane fly rod or a carbonfibre tennis racket with a titanium core, this car combines finely honed ability with a rare level of control. 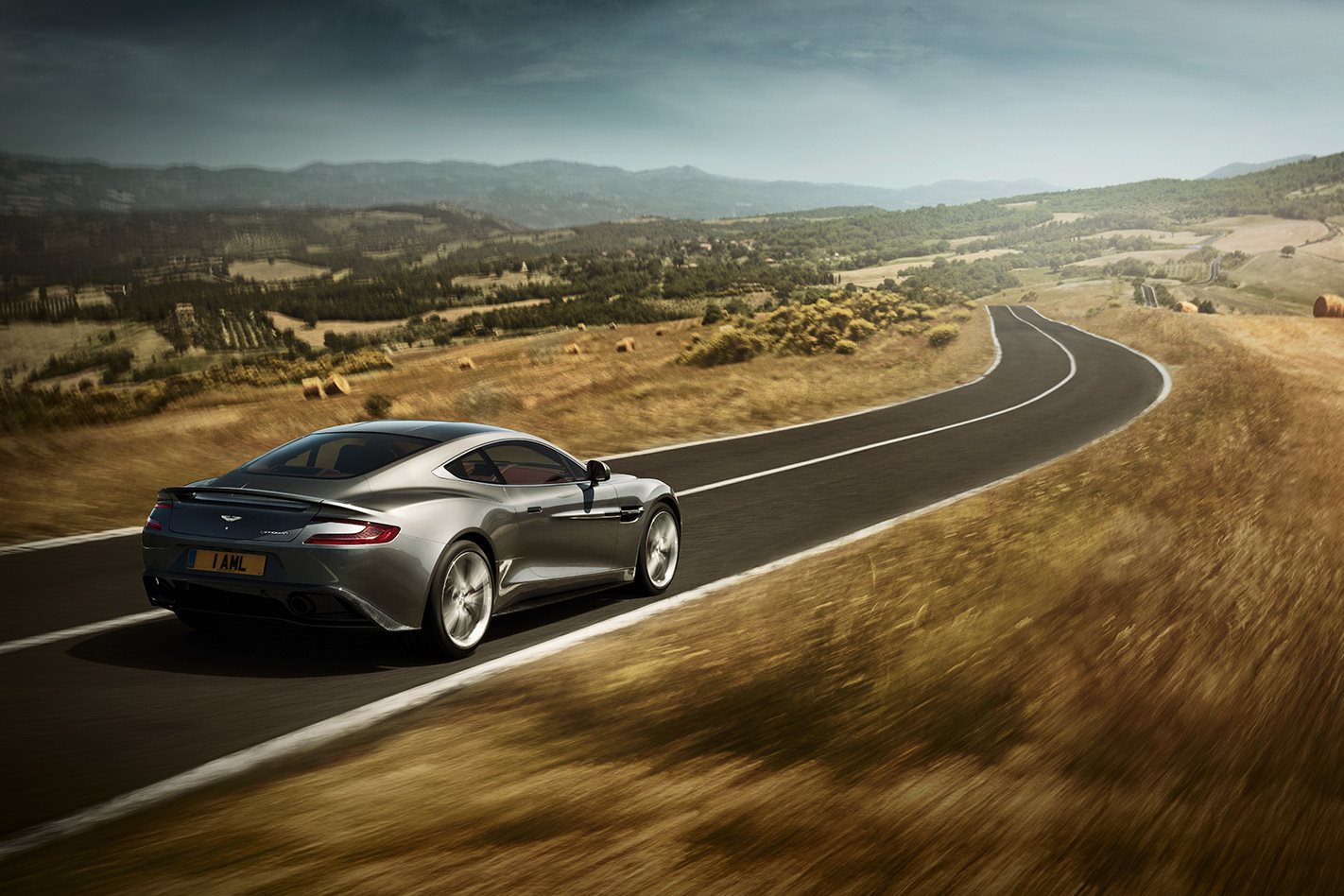 The Aston fuses with the driver like few other high-end thoroughbreds, and by doing so it inspires confidence to an extent that encourages you to explore the coupe’s full potential. The Vanquish is not a brand-new car, but it is much more than a facelift. The design has, for instance, been revised wherever it was possible without altering such hard points as the firewall, the windscreen angle, the roof and the wheelbase.

Inspiration came primarily from the limited-edition (and now sold-out) One-77, which added harder edges and new details such as prominent side streaks and faster lines to the familiar AM proportions. The stance is now more muscular, the LED treatment gives the taillights a more modern touch, there is more visible carbonfibre below the beltline and the more effective fixed rear spoiler is neatly integrated in the bootlid.

In the cockpit, we can at last relish quantifiably more head-, leg- and shoulder-room. This is in equal parts due to the swept-back facia, the slimmer centre console and the reshaped seats. Also new are the pleasantly intuitive air-con controls, the satnav and infotainment upgrades as well as the greatly reduced number of secondary knobs, buttons and switches for a much cleaner look.

Pragmatically, the most important improvement is perhaps the 60-percent-larger luggage compartment, which now holds an adequate 368 litres. Included in the base price are beautifully crafted full leather trim, memory seats, Alcantara headlining with contrasting stitching and a sensational 1000-watt B&O music centre with 13 speakers. 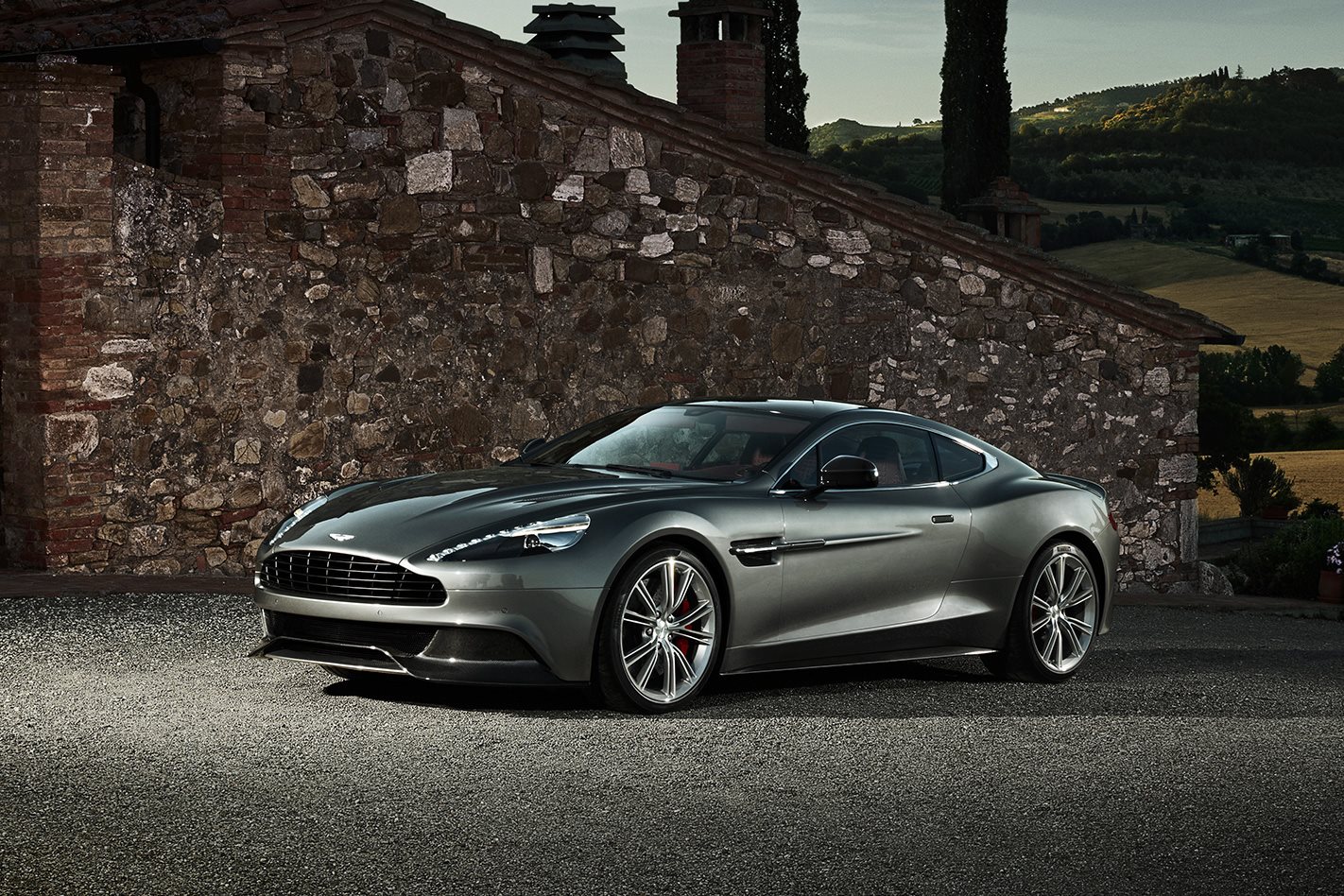 One of these days, emission regulations may kill the long-running, normally aspirated V12 engine that was developed when Aston still belonged to Ford. But before the bent twelve starts its second career in downsized and turbocharged form, Aston gave the big-bore 5935cc unit one more new lease of life.

Redesigned cylinder heads, variable valve timing on the intake and exhaust side, bigger throttle blades, more powerful fuel pumps and a new delta-wing intake plenum were instrumental in increasing the output from 385kW to 427kW at 6750rpm and torque has climbed from 570Nm to 620Nm at 5500rpm.

Since the weight remains almost unchanged at 1739kg, acceleration from 0-100km/h improves only marginally from 4.3 to 4.1sec. Starting an Aston Martin engine and getting it into gear has long been a ritual. Instead of a profane key, the style merchants from Gaydon furnish their clients with an ECU (short for, yes, electronic control unit).

It is made of heavy crystal, contains a handful of bits and bytes, rests in a chrome-rimmed slot and needs to be kept depressed for a couple of seconds to fire the twelve spark plugs. Once the V12 is agreed on its restlessly high and vocal idle speed, you select drive or reverse by pushing a corresponding in-dash glass button. 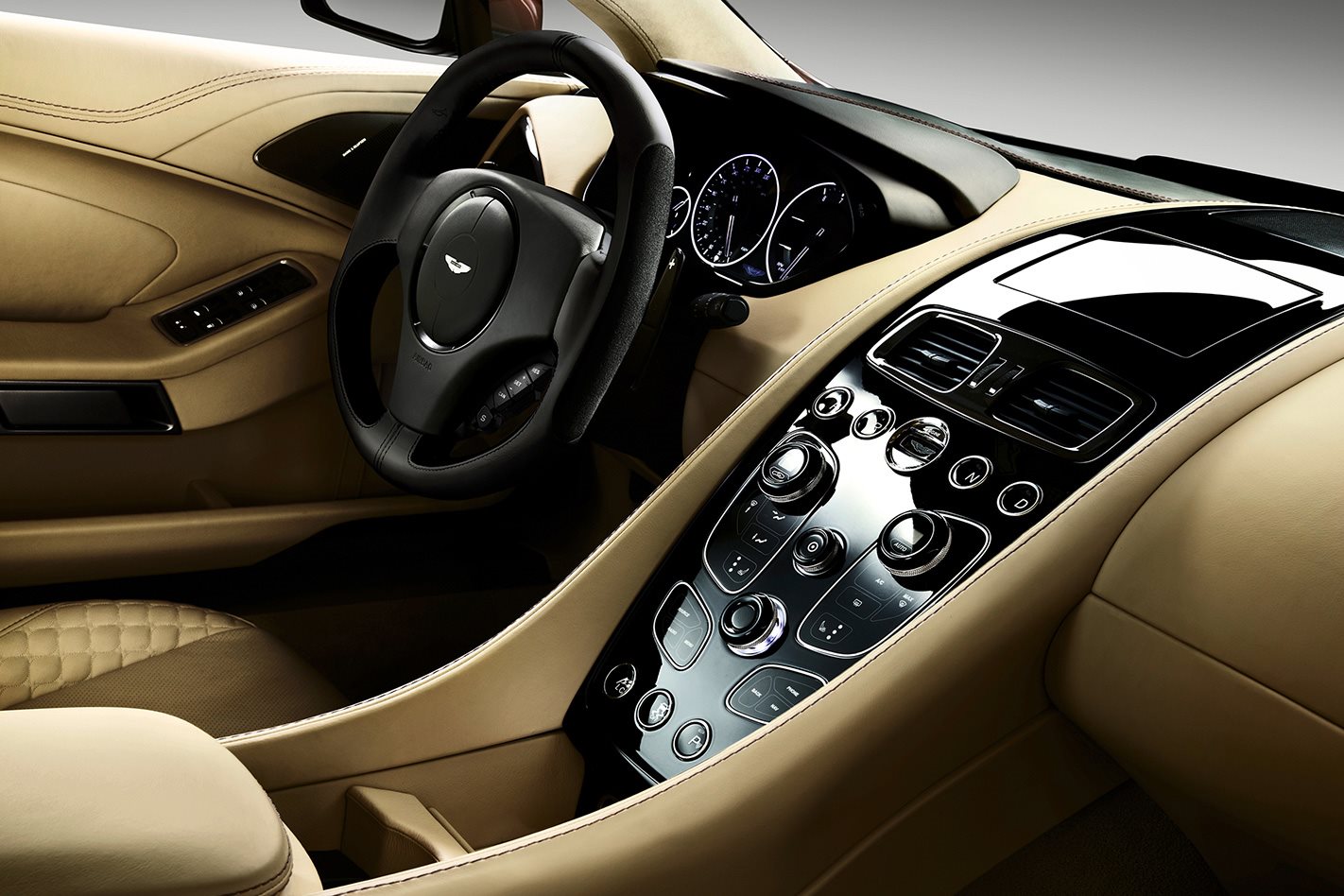 Very stylish, very noble, very British. There are two more adjustments to be made before take-off. Hit the shock absorber symbol on the left steering-wheel spoke, and the dampers will firm up. Push the S button on the right spoke, and the drivetrain will prick its ears and bare its fangs.

In this setting, the decibel wave reaches tsunami strength at only 3500rpm, full-throttle acceleration borders on physical injury above 5500rpm, and we do depend on the limiter to save us from partial deafness beyond 7000rpm. Your neighbours will hate this car, but for the person at the wheel there is simply no better early-morning aphrodisiac than a switchable free-flow exhaust.

After a six-hour tour de force through the Birmingham and Manchester hinterland, we return to base with one soaked shirt, two glowing transfigured eyes and three findings: the Vanquish is no Ferrari F12 but it will happily challenge most remaining super GTs; it fares very well without that glut of driver assistance systems they tend to empty on you elsewhere; and – like the wonderful V12 Zagato, the timeless Vantage S and the facelifted DB9 – it is a real threat to one’s savings. And one’s licence at roundabouts. 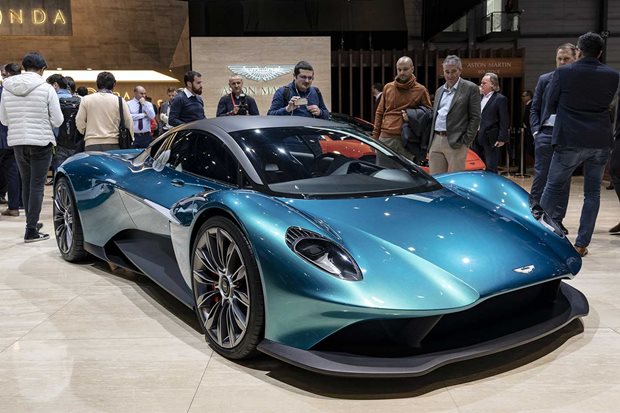