There's a reason the world knows The Corkscrew by name. It is, absolutely, one of the most technically difficult tests of a driver and a chassis in the world.

This review was originally published in MOTOR’s February 2012 issue

Its obstacles range from a high-speed, crooked braking zone that offers no forgiveness to the ill-positioned, to the utter invisibility of the left and right apexes, not to mention the demand to release the front end before you can get on the power again. It’s tough to get right in any car, much less a front-engined, rear-drive coupe based around a mass-production mid-sizer.

But the C63 AMG Black Series isn’t overly faithful to its humble C-Class beginnings; it took the better balance and front-end involvement of the C63, but then gave it more. Of everything.

The engine gets all SLS in its tech, including forged rods and pistons, a lightweight crankshaft and a new brain. It also gets more power, with 380kW of power and 620Nm of torque – an impressive amount of which arrives from surprisingly low revs for a non-turbo motor. It hooks this up to an even stronger version of the seven-speed auto-manual hybrid that is AMG’s stock ’box, which is essentially Benz’s seven-speed auto with an AMG clutch pack stuck on the end of it.

It gets bigger steel brakes, too, with six-piston calipers up front lurking inside 19-inch forged alloys that sit a long way further out than they do even in the C63 AMG. The body has been stretched 56mm wider at the front wheels and 84mm at the rear to help give the Black Series more lateral grip, and handling is further assisted by a set of coilover struts that feature six-click adjustment on both compression and rebound damping.

At 1635kg it’s not exactly light, and AMG needed to jettison the rear seats just to achieve even that. Yet it still manages to handle the dynamic challenges of The Corkscrew like it was born for it. And, in a way, it was. 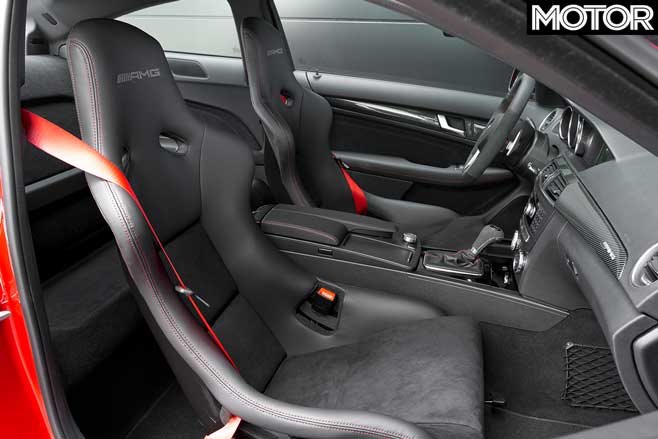 As with all of its Black Series cars, AMG realises the C63 will spend much of its time on tracks, which makes the lack of carbon-ceramic rotors – even as an option – more puzzling. It doesn’t make it slower, though.

It’s a raucous, brutal, sophisticated and overwhelming sound the instant the 6.2-litre V8 fires up and things just get angrier and more brutal with each added speck of spinning speed. It fires to 100km/h in a claimed 4.2 seconds – only 0.08 seconds quicker than MOTOR eked out of the C63 in the December issue – but is capable of 3.9 on the stickier Dunlop rubber that comes with the Track package, while the Aerodynamics package sees a bigger front splitter and an enormous carbonfibre rear wing fitted.

Ours is a track-only test, but the Black Series is seriously impressive here. The noise is something to behold, even at idle, and it backs up the verbal barrage with fists of steel – running to a governed 300km/h given any straight much longer than a driveway. 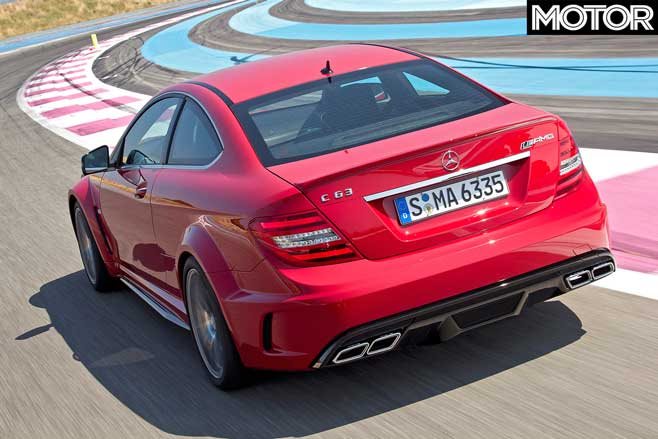 There’s a constant urgency to the Black Series that even the sparkling C63 can’t manage; it’s as though the car gets upset with you with any lift of the throttle in a straight line. It just wants to be hit hard all the time.

The gearshift is also quicker than it is in the C63, whipping through the cogs with a sudden craaack that reverberates through the entire car and blipping hard on each downshift. There are aluminium paddles behind the steering wheel, but most of the time you may as well just leave the car to do its own shifting so you can have time to appreciate the rest of it.

While the engine was always clearly the intended star of the show and the gearbox is its just-adequate companion, it’s the chassis that goes close to stealing the limelight. The first time you notice it is under brakes. 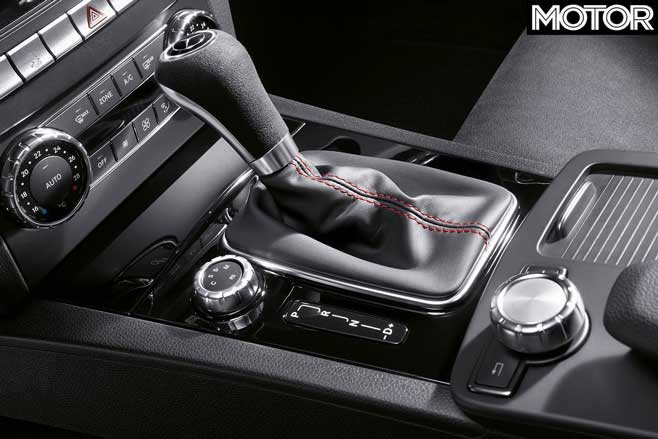 There is an assurance to the way the Black Series behaves at the front half of even the trickiest corner that builds a driver’s confidence. It’s partly due to the front-end overhaul of the C-Coupe, but it’s also got a lot to do with the 50 percent lockup the diff can deliver on deceleration. It just hunkers down into the road with barely any rear-end wiggle. The car’s data traces showed us hitting 100 percent braking force on every corner of the track, and that’s something that can only come with confidence.

Similarly, the steering feel from the front end carries over the C63’s intimacy, adding more grip and a sharper bite. It’s a better M3 than BMW can build right now and it’s so accurate that you can point its inside wheel at a single stone, even with the car fully loaded mid-corner, and feel the tyre move over it through the flat-topped and -bottomed steering wheel. 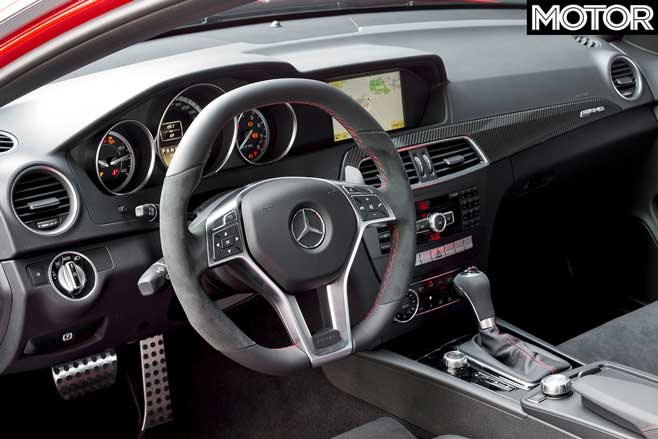 The seats hold you harder than a spider’s web on an errant fly and the car’s mid-corner behaviour is wonderfully fluid and integrated in a way past Black Series cars haven’t managed. It helps that the throttle is accurate enough that you can squeeze on exactly the right amount of power at exactly the right time, and its atmo nature comes through in its brilliant adjustability on long, sweeping corners. We pulled 1.37g out of the Black Series in the quick corners after The Corkscrew, pulled well over 1.1g under brakes and easily cranked out over 200km/h in three different places, not experiencing a single a trace of brake fade along the way.

Where Benzes – even quick ones from AMG – have been utterly adequate through a corner, the Black Series is utterly involving, fascinating, tantalising and inviting, only getting better with a series of corners. 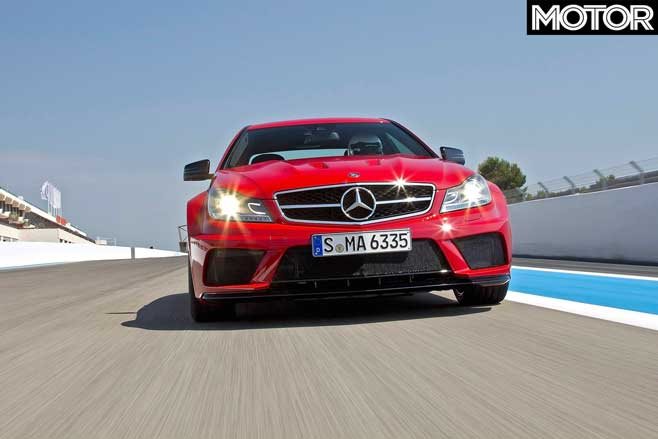 It will happily powerslide its way through slower corners or just drive through them quickly, whichever you'd prefer. It will beg you to let it dance in faster corners; its cheerfully chatty front end forcing the turn, while the diff lets you play the throttle and its chest-wobbling sound continues as the tortured outside rear tyre still finds time to feed you precisely the information you need, precisely when you need it.

No matter how you look at it, the C63 AMG Black Series is fun. Simple as that. It’s just engagingly, outrageously and controllably fun.

Back in time with classic MOTOR 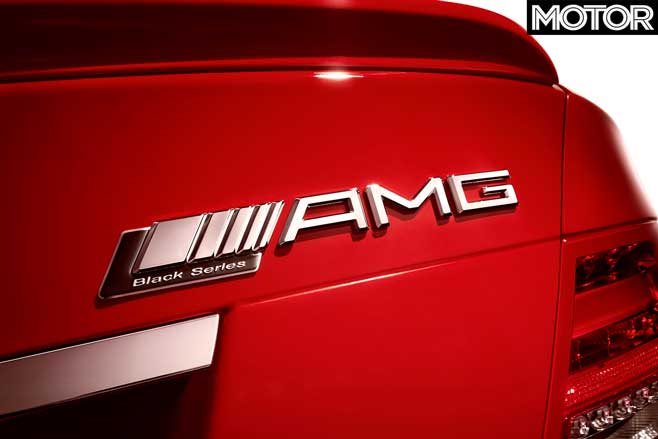 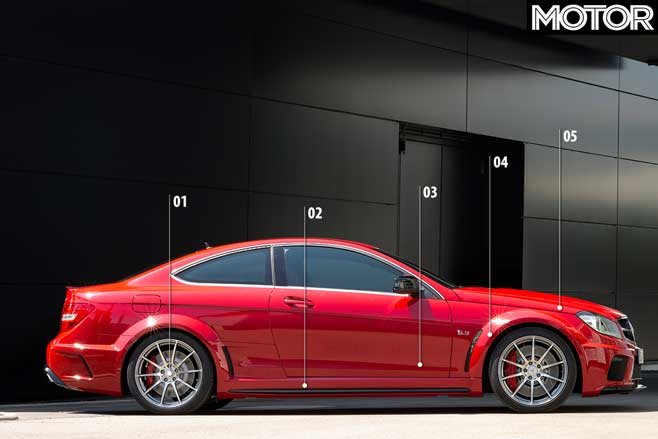 01 | Wider Stance
Stretched 56mm at the front wheels and 84mm at the rear, the Black Series' grip is even more oustanding than C63

02 | Chassis
A front-end overhaul of the C63, along with the 50 percent lock-up the diff can deliver on lift-off, inspires more driver confidence

Unleash the racer within 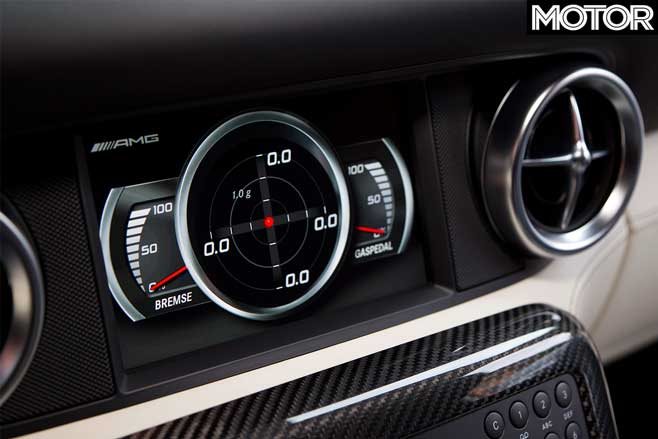 The only thing better than putting together a killer lap is being able to show it to someone. AMG introduced the Performance Media option on its SLS, but it’s now able to punch out data logging in the Black Series. It records everything for you, along with lap times, sector times, 0-100km/h times and more.

It’s perfect for bench racing, because it will learn whatever track you’re on and show you how you’ve gone. It'll bring up your laps in order and is clever enough that you can use the car’s navigation dial to scroll your way around the lap. It'll also show your time, braking and throttle percentages, speed, lateral acceleration and steering angle on the 178mm colour screen. 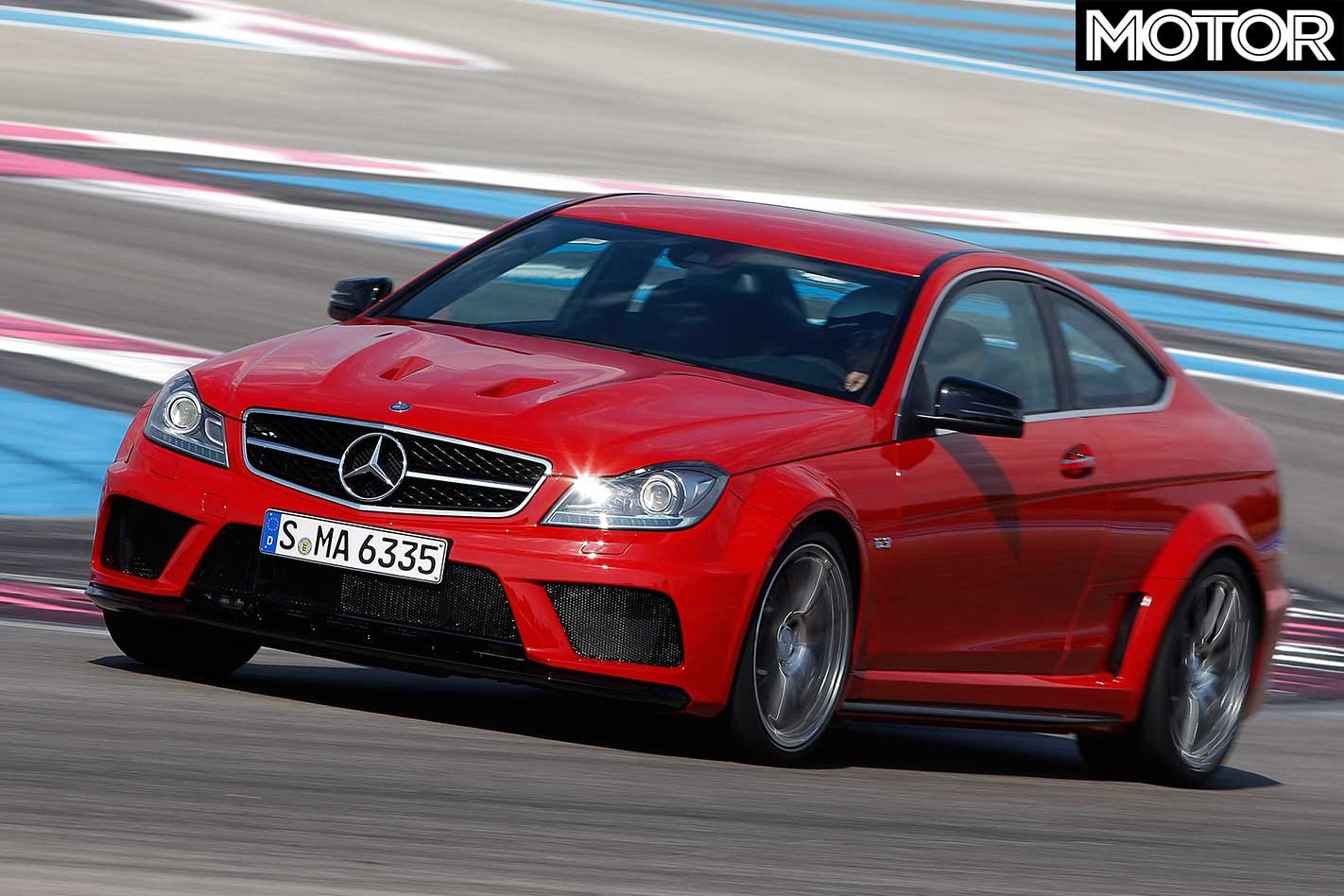 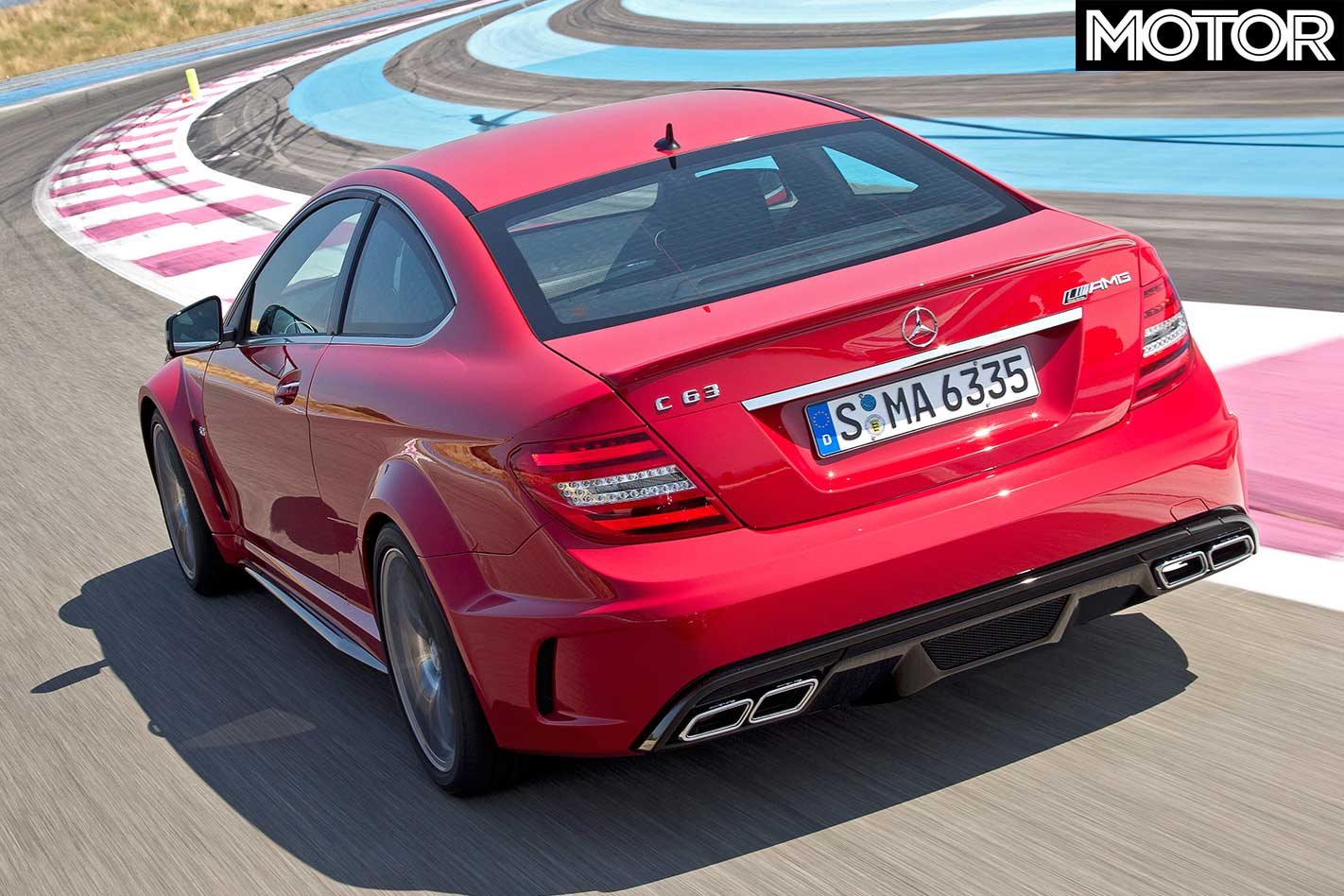 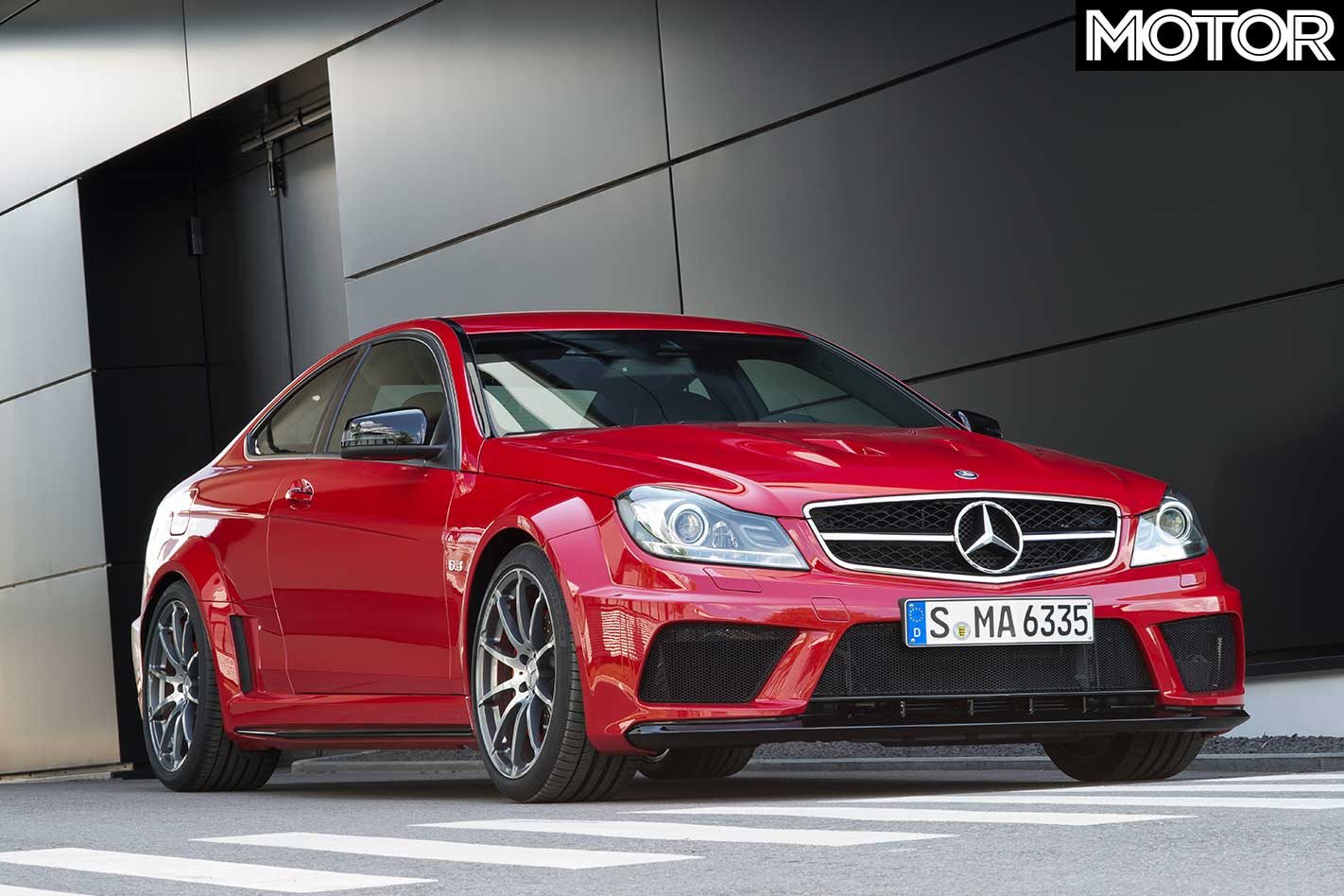 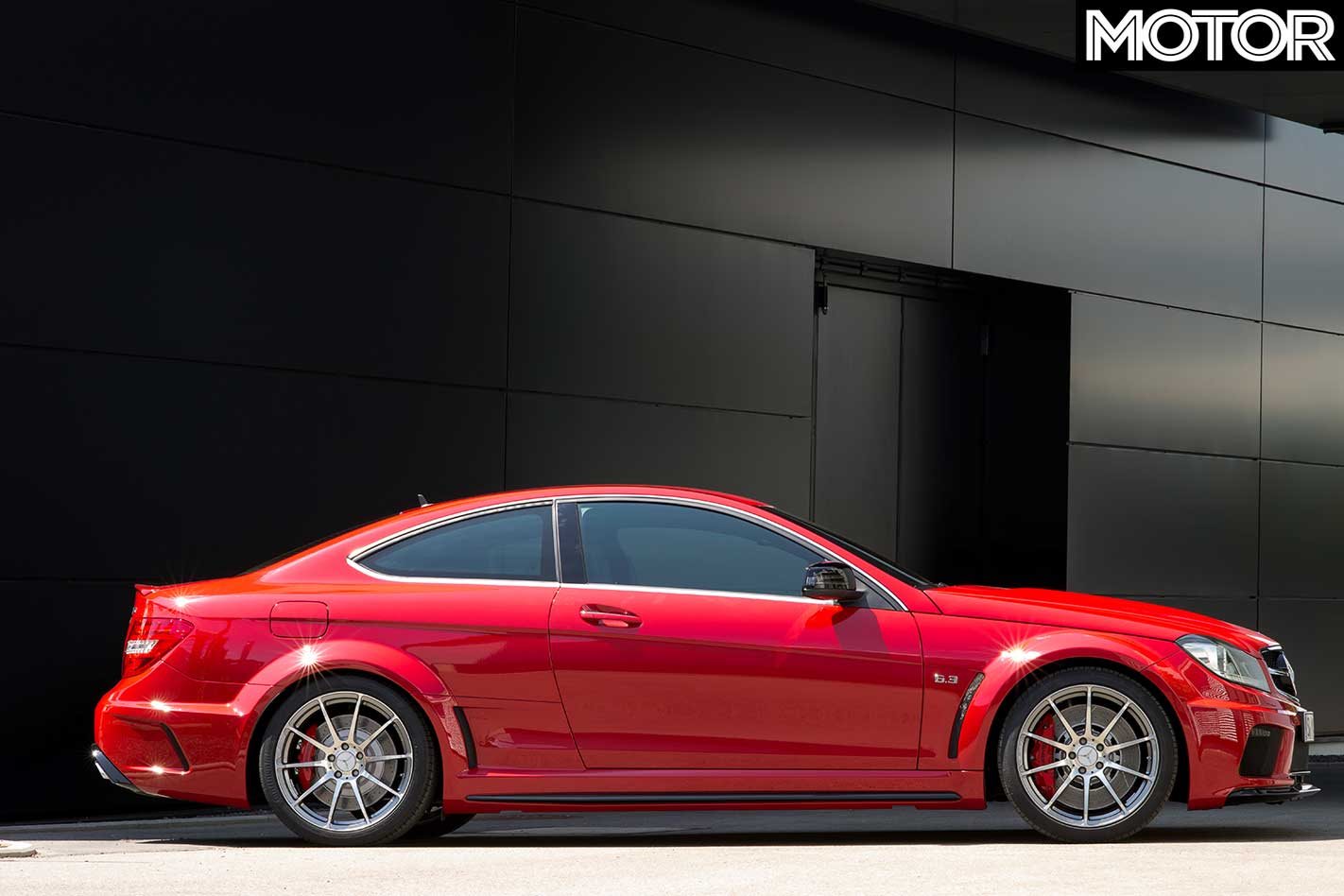 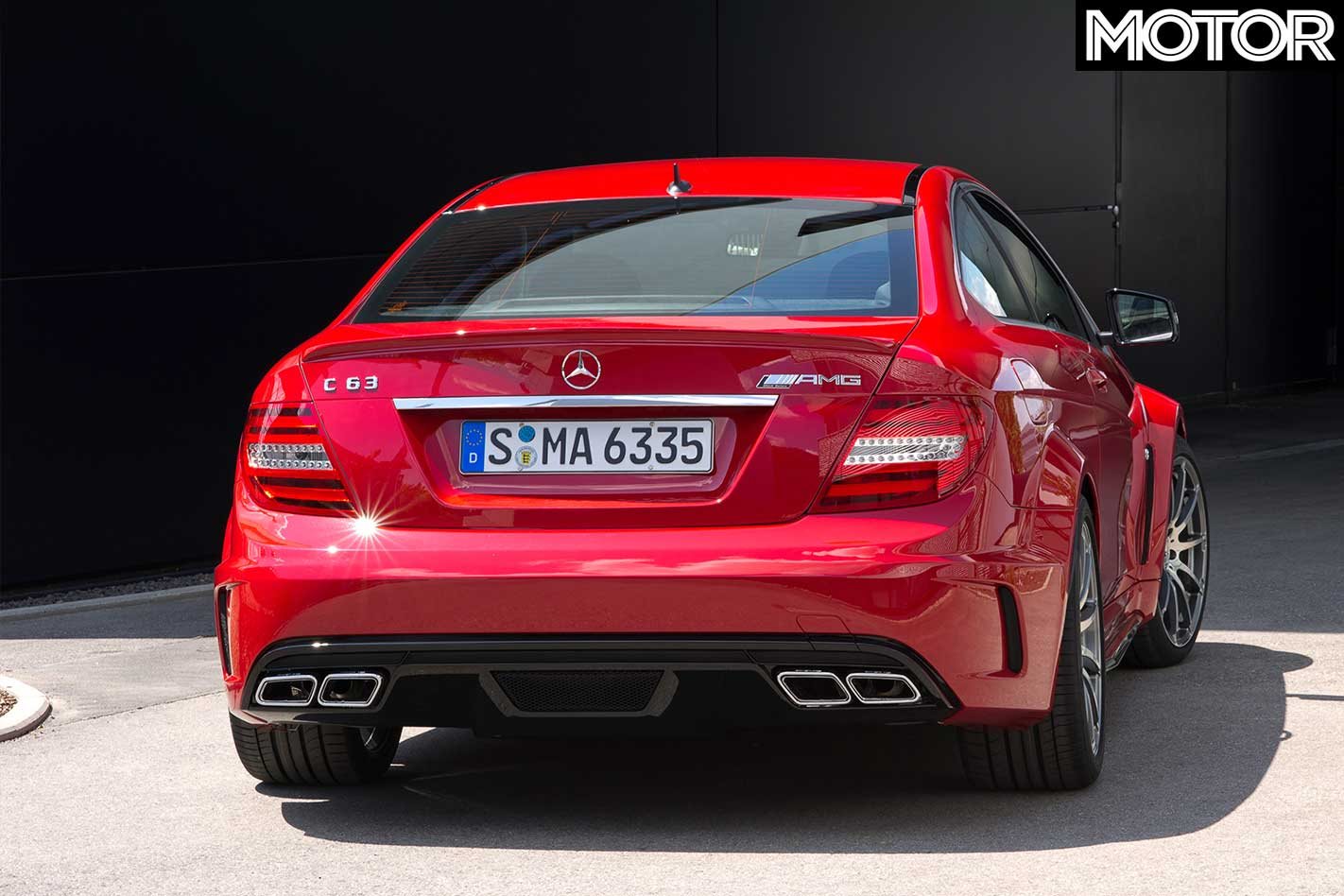 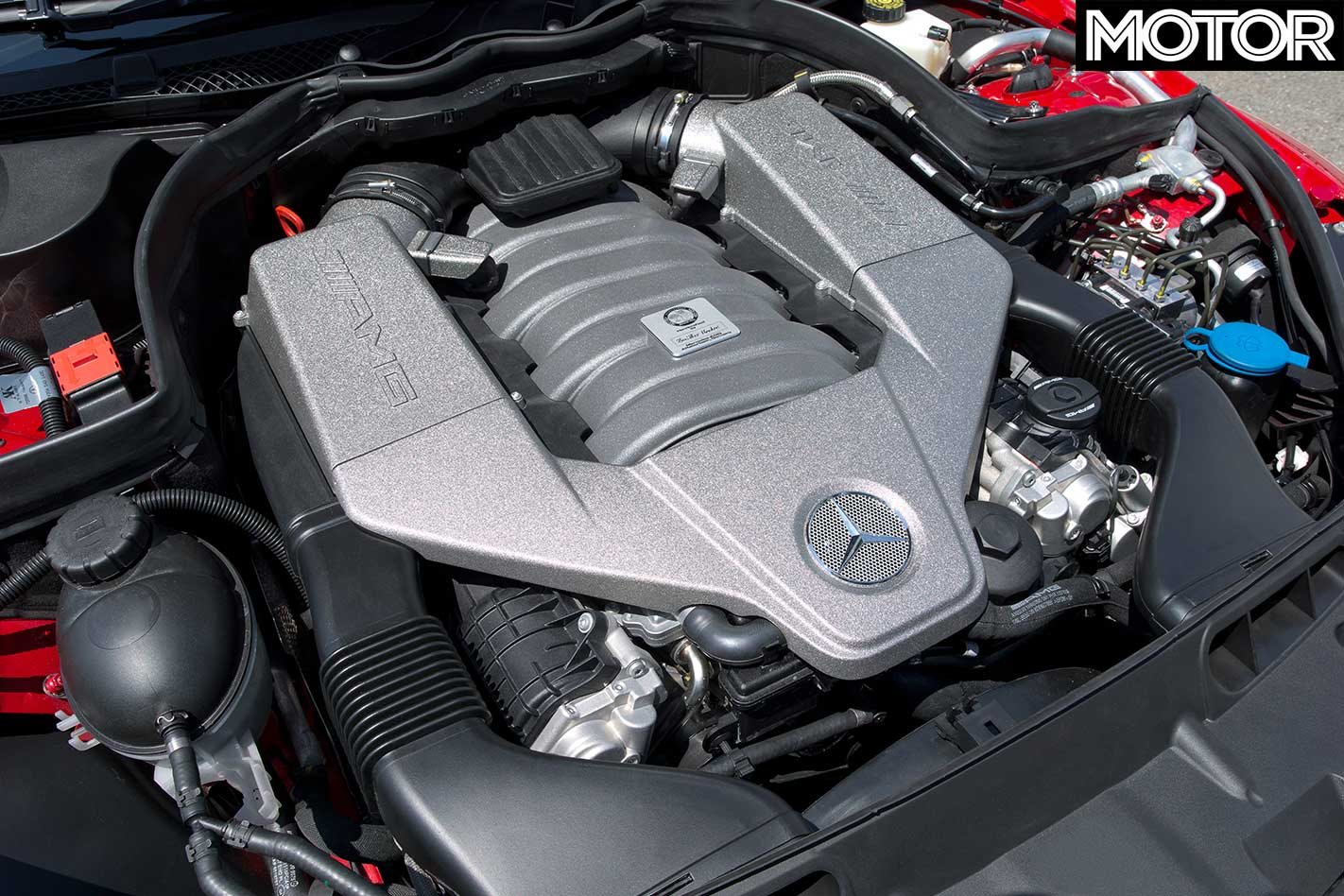 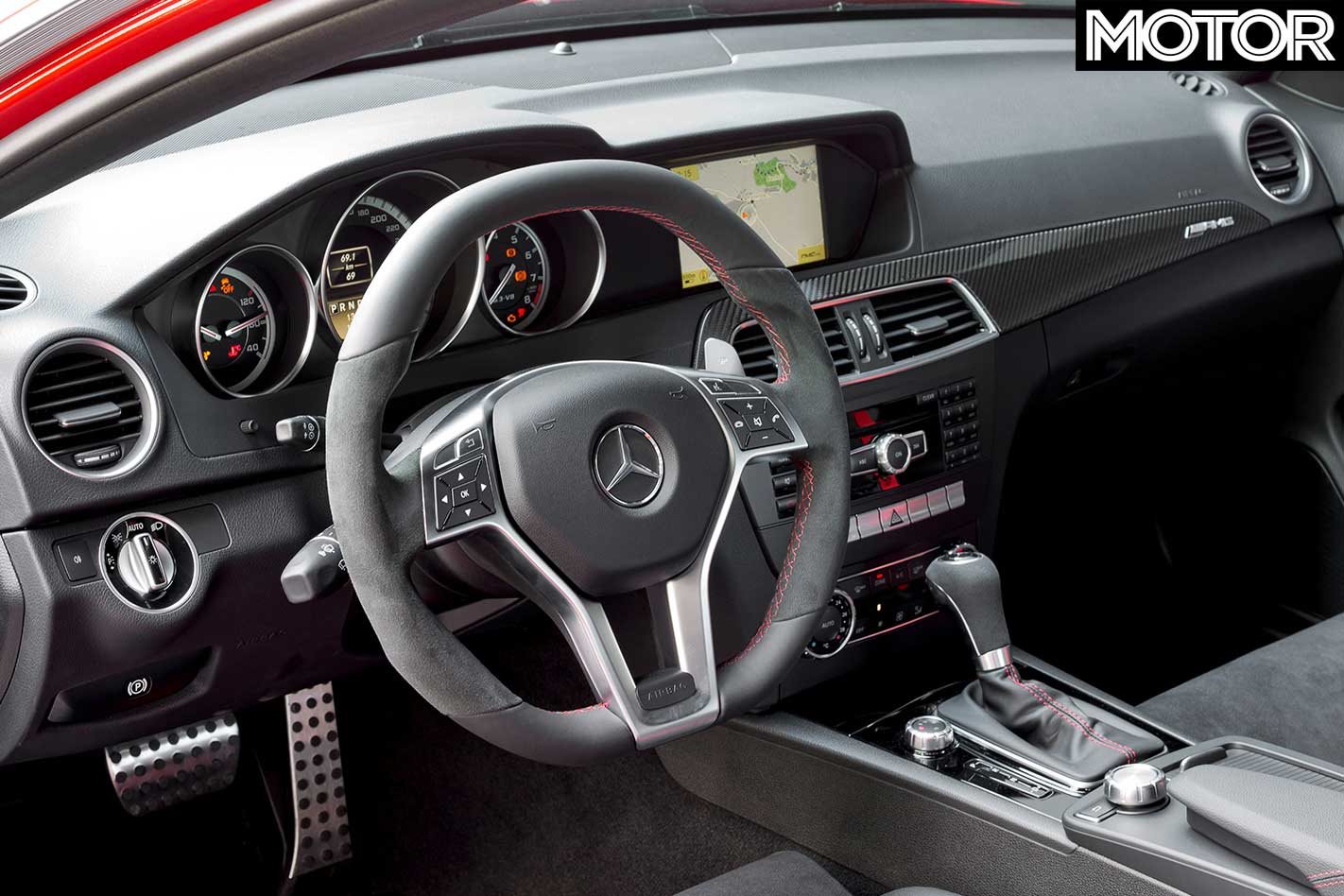 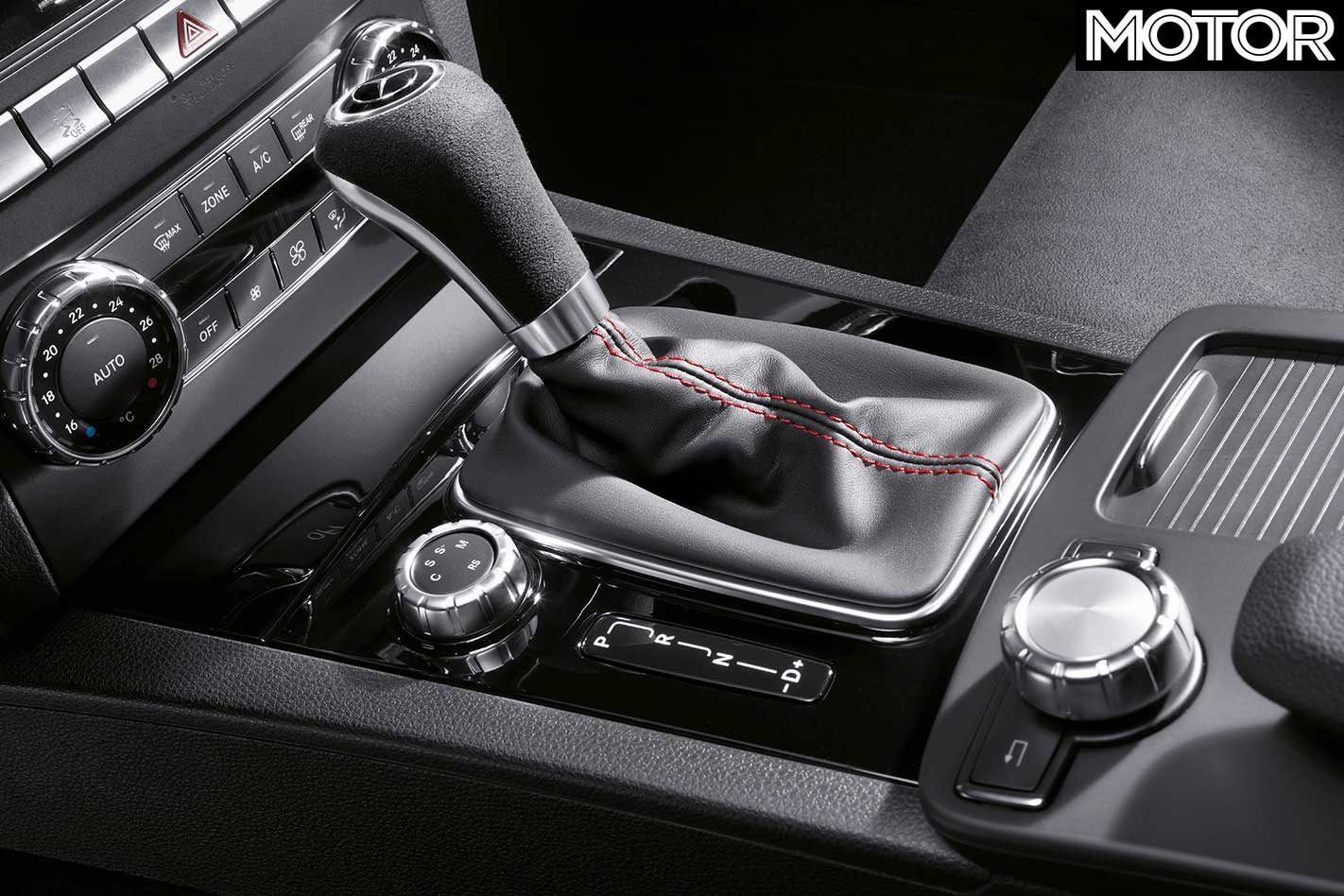 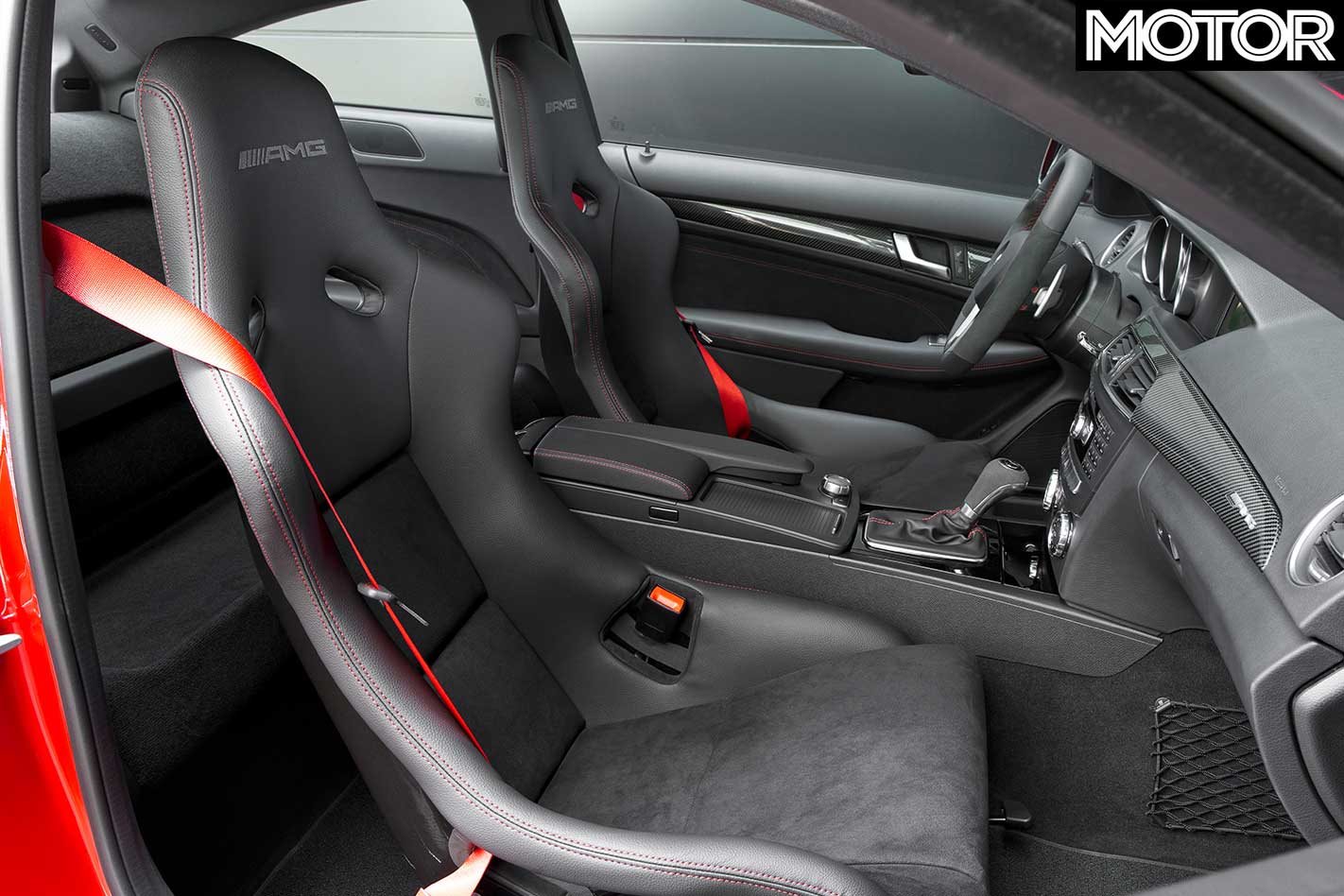 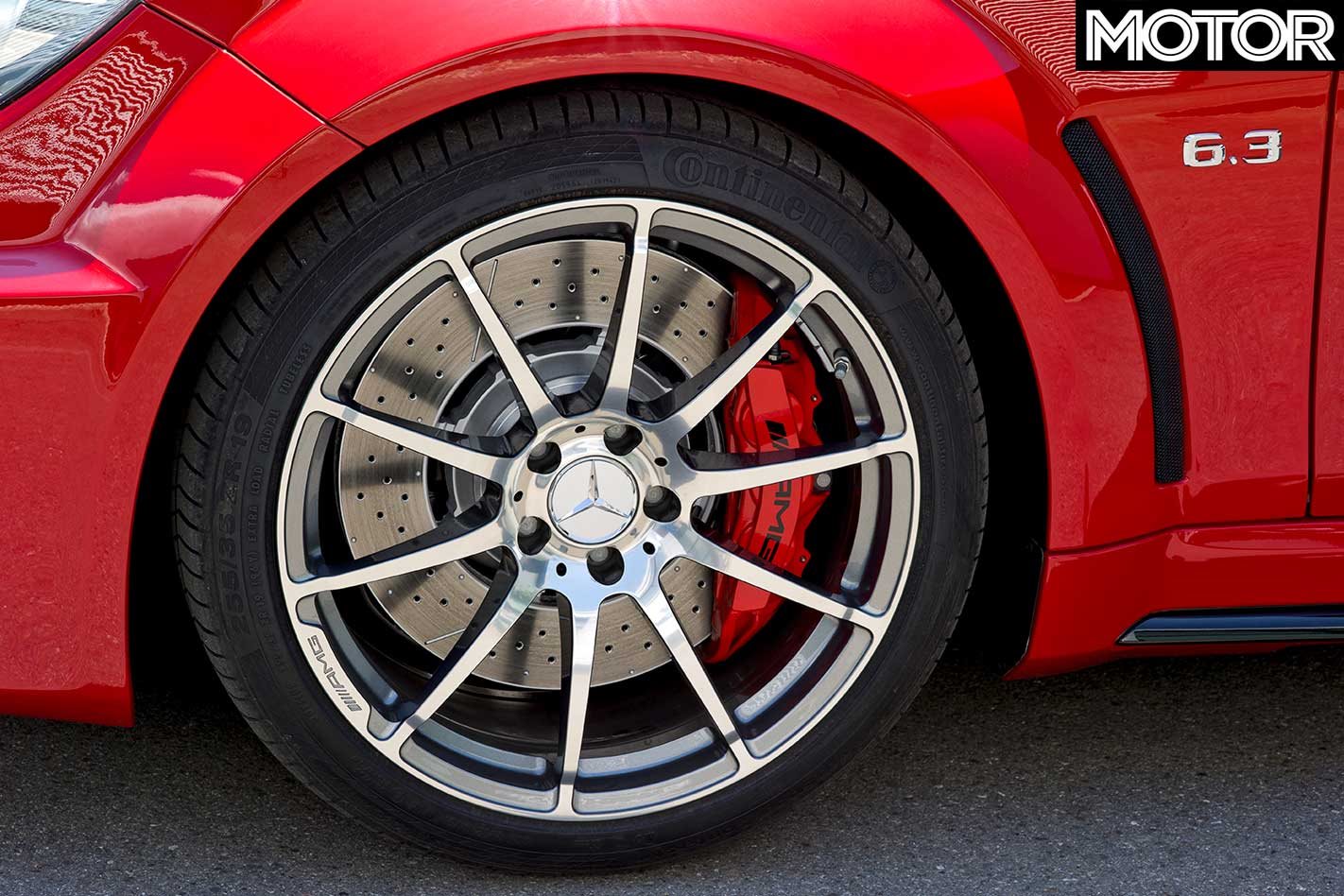 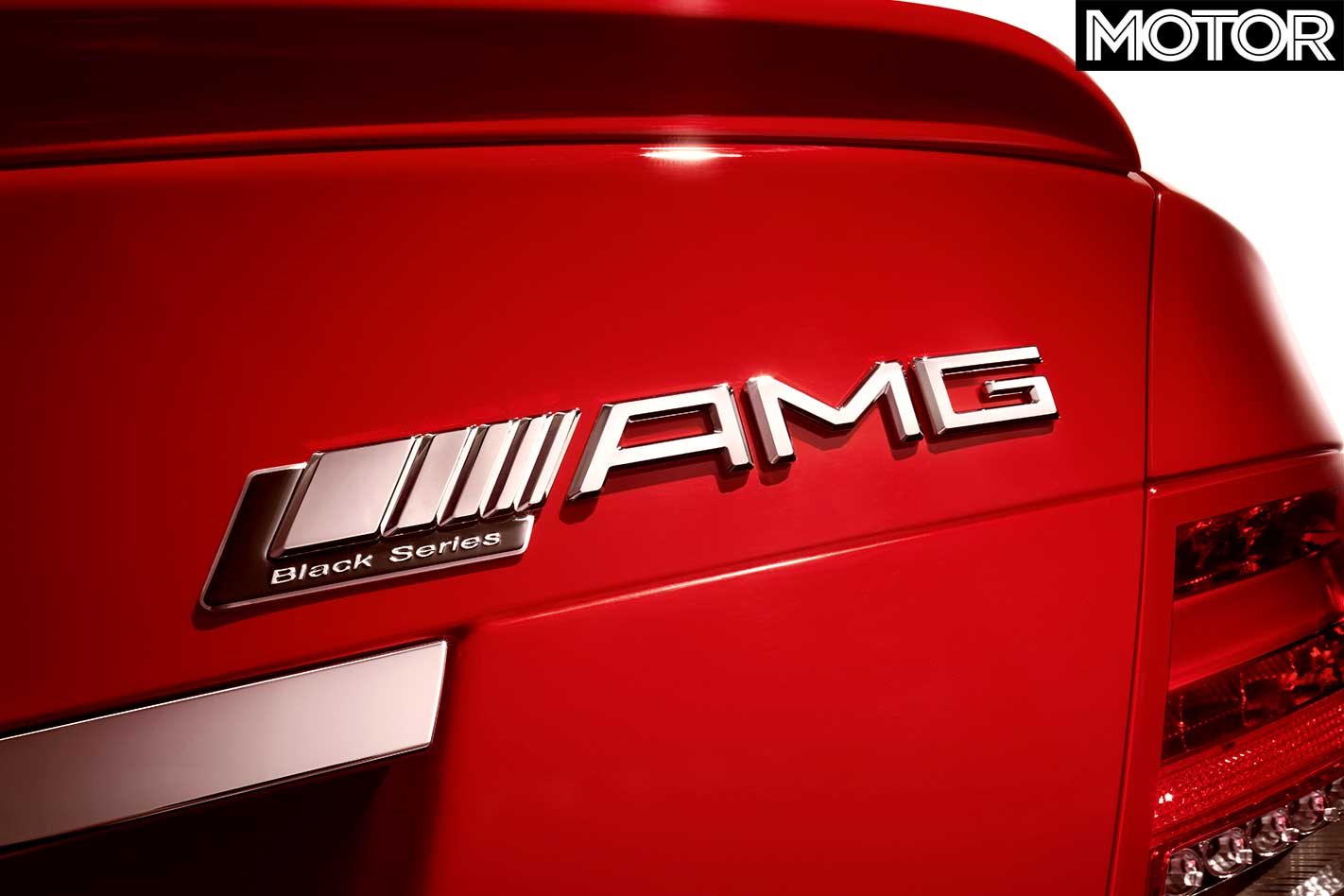