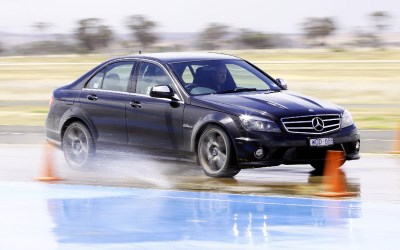 Uncompromising performance proves both a strength and a weakness.

Of the millions of oohs and ahhs that are expended over the days of judging COTY, there was one particular phrase we kept hearing when drivers stepped from the C63 AMG: "Just freakin' awesome."

The C63 really shouldn't work as well as it does. Into what we regard as a compact sedan is shoe-horned a 6.2-litre, 32-valve, hulking and seriously mother-grabbing V8 monster motor, purpose-built by AMG and not derived from any Benz production unit.

Ah, but that's where the flagrant awesomeness of this beefed Merc sedan comes in. It goes around corners, too.

Braking is on absolutely the same scale of superness, with 360mm front discs clamped by six-piston calipers and the 330mm rears by four-pistons. "It's got great go-age," said Carey, creatively, "but it's also got great stoppage."

It also has great steerage. It has no right to turn into corners the way it does, and as Poppitt put it, the steering transmits a "constant stream of data". "Hard to fault, dynamically," said Hawley, who praised the steering, brakes and ESP calibration on dirt. My own notes read "95 percent of the result of an M3 coupe, for 50 percent of the effort."

For the first time on a Benz, the ESP system can be completely disabled, yet its two functioning modes drew plenty of praise. "The ability to switch the ESP to Sport is a major plus," wrote Bulmer, who also described it as a "gripping performance car - utterly enjoyable". Poppitt agreed: "The ESP calibration is very well-judged, very reassuring."

The 7G-Tronic tranny likewise boasts three modes, with finely measured blipping on downshifts. A part of the C63's performance ambience is also, finally, down to an improved control feel: the chunky steering wheel and rock-solid 'Speedshift' paddles transmit precision.

But heading the performance, always, is the engine. "Apocalyptic engine note - I want it as my ring-tone," Poppitt opined. "Wheel spinning in the first four gears on a wet, but coarse surface ... Impressive," Newton surmised. Hawley's scrawly notes read: "Sweetly brutal engine" - or possibly "Sweaty brutal engine." It's both.

So, issues? Judges found the low-speed ride w-a-y too firm. Hawley, who conducted the Wheels comparison test earlier in the year, recounted that it's firmer than even the M3's stiffest track setting.

It's got a fully equipped cabin and a staggeringly complete safety score, but Tander felt the interior looked "a bit plain and disappointing".

Robinson, while maintaining the car's awesomeness, still felt that it "doesn't have the engineering integration, the designed-as-a-whole feel of the M3".

Newton's notes read along similar lines: "One of the most cohesive AMGs I've ever driven - most have too much power and too little chassis. This feels better balanced, but still a sledgehammer. The M3's guile appeals to me more."

"Looks tough, goes hard, and has forced BMW's hand on M3 sedan pricing," concluded ed Ged, joining the consensus that half the reason for the C63's excellence is the platform from which it was derived. And that's the model that won COTY last year, by costing $57-$96K and being, well, adequately awesome. 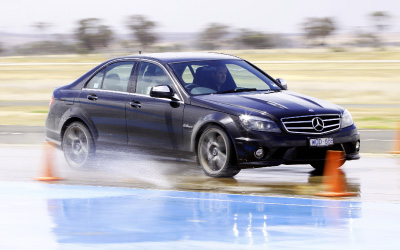 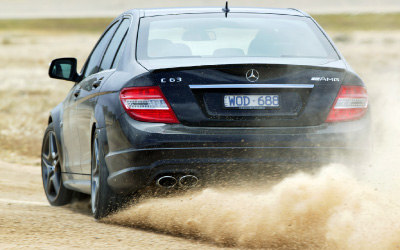