Audi’s first plug-in hybrid to go on sale in Australia, the A3 Sportback e-tron may be overdue but it’s brilliantly executed. And barely distinguishable from a petrol A3 from behind the wheel

Audi’s first plug-in hybrid to go on sale in Australia, the A3 Sportback e-tron may be overdue but it’s brilliantly executed. And barely distinguishable from a petrol A3 from behind the wheel.

WHAT IS IT?
The first of many e-tron models expected from Audi, the A3 Sportback e-tron is a plug-in hybrid. It begins with the 1.4-litre turbo-petrol car and adds a battery pack and an electric motor, to give a range of 920km and an official Euro fuel figure of 1.6L/100km. It’s the most efficient A3 on sale.

WHY WE’RE DRIVING IT
This is the first plug-in hybrid from Audi that Australians can buy. And while it’s a hybrid and not a pure electric vehicle, it’s about the size of a Nissan Leaf and costs the same as the smaller BMW i3. It’s also the first of many e-tron models, with Audi confirming an R8 e-tron and an e-tron SUV (likely called Q6) by 2018. 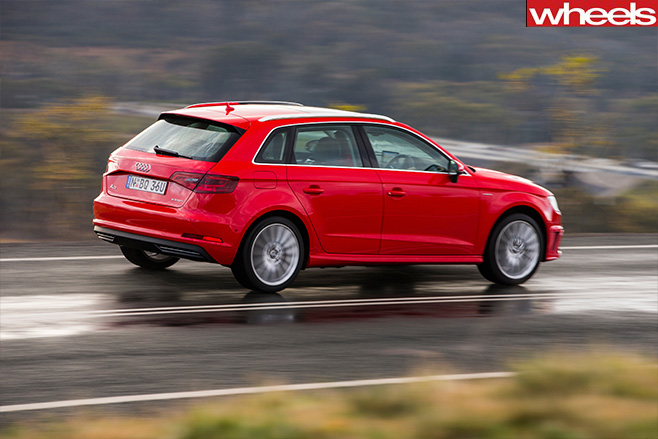 MAIN RIVALS
The A3 Sportback e-tron lacks a head-on opposite from any other brand. The BMW i3 not only sits in a more compact segment, but is offered as a pure EV, as is the Nissan Leaf. The Lexus CT200h competes in the same segment, but it’s not offered as a plug-in hybrid - even though the car it is based on, the Toyota Prius, is offered that way overseas.

THE WHEELS VERDICT
The A3 Sportback e-tron is a brilliantly executed plug-in hybrid. But given the pace at which electrification is progressing – even from Audi itself – it seems obsolete already. That’s not to take away from its excellent dynamics, miserly economy and superb fit and finish.

PLUS: Seamless transition between electric and petrol; loaded with equipment; drives almost identically to a non-hybrid A3; includes charger install
MINUS: Price; lack of green fanfare; extra heft; quickly out-dated

THE WHEELS REVIEW
AUDI is talking about electrified models with better batteries and Tesla-beating 500km-plus ranges. That’s serious progress from when this car, the Audi A3 Sportback e-tron, was rolled out at Geneva in 2012. So is the first e-tron still relevant when the EV is on the rise? 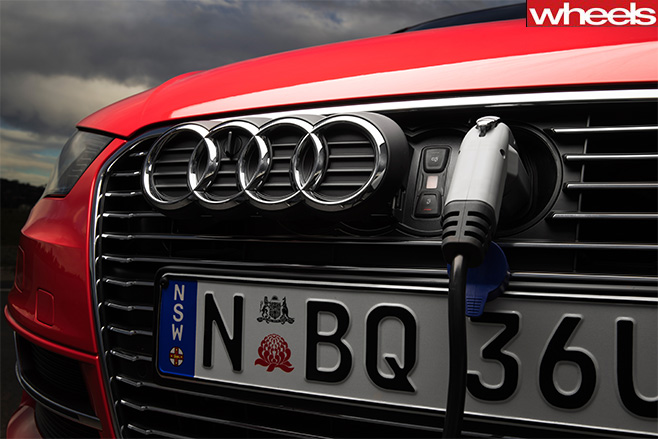 Let’s sort out the confusion first: this is not an electric car, but a plug-in hybrid. It has a good ol’ internal combustion engine up front – a 110kW/250Nm 1.4-litre turbocharged four-cylinder – and an electric motor sandwiched between it and the six-speed DSG transmission, driving the front wheels. Below the rear seat is a 96-cell, 8.8kWh lithium-ion battery pack.

If you’re wondering why the e-tron’s claim doesn’t match the 1.5L/100km figure quoted for Euro models, that’s because the Aussie version runs one-inch bigger 17-inch alloys. These also reduce its range by 20km, but that’s still a capital-to-capital 920km. Those ‘Turbine’ alloys, chrome front grille and hidden exhaust tips are all that will tell your neighbours that you paid more than $60K for a C-segment hatch, $24K on top of the price of a 1.4 TFSI CoD A3 Sportback. 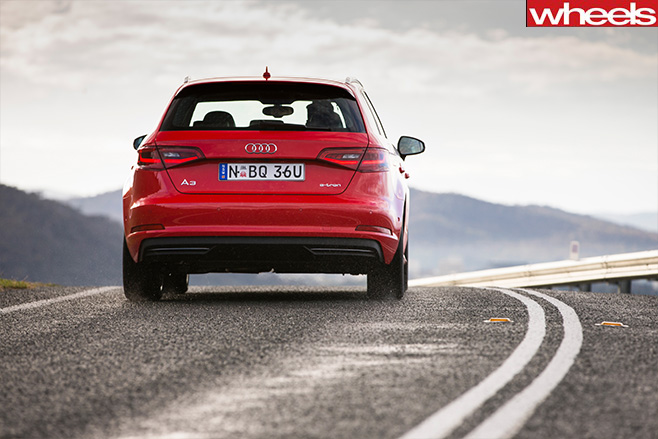 The fact that the e-tron doesn’t look like a science project is a plus or a minus, depending on your perspective. Driving it, you almost won’t be able to tell you’re in the most parsimonious A3. With zero fanfare in the Space-Shuttle tight cabin, it’s typical A3 – meaning class-leading fit and finish. Leather, sat-nav and a reversing camera are among the standard fare, while crucially there’s no change to the cabin space, although the boot is 100-litres smaller.

An EV Mode button allows you to choose pure electric propulsion for up to 50km and 130km/h, ‘hold’ to save what’s left in the battery, or Auto, which choses the most efficient mode. You’ll also gain range from the regenerative braking, offered in the Charge mode to top up the battery pack.

In EV, the cabin refinement is brilliant and the only qualm is road noise from those larger tyres. This is a genuine premium hatch, with the change to the petrol engine absolutely seamless, and that cabin remaining library quiet with a comfortable, if firm, ride. 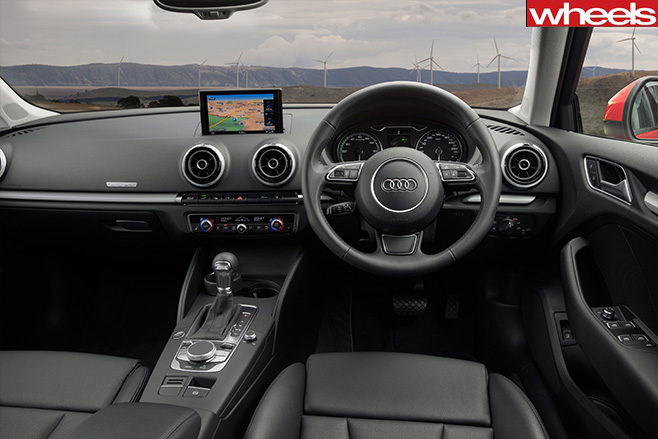 The e-tron weighs 298kg more, too. Granted, its 7.6sec 0-100km/h claim hides the extra kegs well, but it’s noticeably heavier when cornering hard or braking heavily. It rolls more, too, but the body is well managed. Its steering weighs up nicely and those 17-inch tyres bite more strongly than the 16-inch shod cars we’ve tested in Europe. That’s an impressively minimal impact on the A3’s dynamics from carrying its electric hardware.

Charging takes around 2.5 hours with a fast charger, or up to five hours using a standard 10-amp household socket. Yet even here, Audi will cover the cost of the charger install in most circumstances, provided you use its mob to ensure a proper job.

In a world of pure EVs such as the BMW i3, and with 500km+ e-trons on the way, it’s hard to see the A3 making a serious impact, as the game it’s playing is moving rapidly. Yet, despite the fact that it’s expensive and somewhat overdue, the A3 e-tron is the most convincing plug-in hybrid yet.

Click here to read the full range review of the Audi A3 and S3.