The 2015 Honda Civic Type R comes as the Japanese maker returns from the hot-hatch wilderness and a snoozefest of road cars with a turbocharged, samurai-sword sharp warrior

The 2015 Honda Civic Type R comes as the Japanese maker returns from the hot-hatch wilderness and a snoozefest of road cars with a turbocharged, samurai-sword sharp warrior

WHAT IS IT?
The new Civic Type R could be a return to form for Honda: it’s the first time the maker, known for its rip-roaring, high-revving atmo VTEC engines, has decided to use turbocharging to motivate one of its Type R high-performance models.

WHY WE'RE TESTING IT
It’s time for Honda to show its hand: following a drip-feed of spy images and Nurburgring lap-time claims, it’s time to see if Honda really has rediscovered its mojo with the Civic Type R showing a return to form – or an epic failure…

THE WHEELS VERDICT
Radical shift in Type R philosophy gets largely positive results. Banzai power and the smarts to get it all to the road without drama create a technically impressive package that’s a blast to drive. Only character and good taste is lacking.

PLUS: Ferocious pace, super grip levels and power delivery
MINUS: Lack of steering feel and precision, still not locked in for Australia

THE WHEELS REVIEW
THE 2016 Honda Civic Type R had to change. Honda built its high-performance brand on naturally aspirated fours that revved so hard you thought the needle was doing a second lap of the dial. But rivals nailing sub-eight-minute Nürburgring laps and tightening global emissions standards boxed the hot Civic – the last Type R in eight years – into a corner.

Honda simply had to go for forced induction. So while the new Civic Type R still retains a 2.0-litre four with a VTEC kick, there’s now a mono-scroll turbocharger and an air-to-air intercooler hanging in front of it. The result is a meaty 228kW and 400Nm – huge 80kW and 199Nm increases over what went before – to net a 7min 50.63sec lap of the ’Ring, a new front-wheel-drive record. 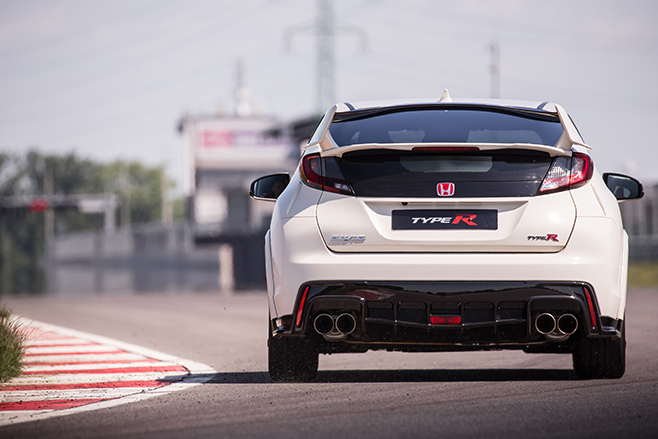 Laggy down low, the motor needs to be pulling 3000rpm to do business, but it does get a serious shift on beyond that threshold, whipping to its 6500rpm power peak in a blur of scenery and an uncharismatic roar of boost. The VTEC switch no longer induces a step-change in either delivery or sound, but the Type R does keep on revving to 7000rpm without feeling like you’re flogging it to prove a point.

It means third gear is often enough on fast and flowing back roads, but to hold one gear is to miss out on one of the sweetest shifts you’ll experience: the six-speed manual has just a 40mm throw, so you can knock the shifter back and forth like you’re playing Grand Theft Auto on the PlayStation. If we’re being picky we’d say the last-gen car’s shift was defter still, and that the brake and accelerator could be closer together for heel-and-toe fetishists, but still, nice gearbox. 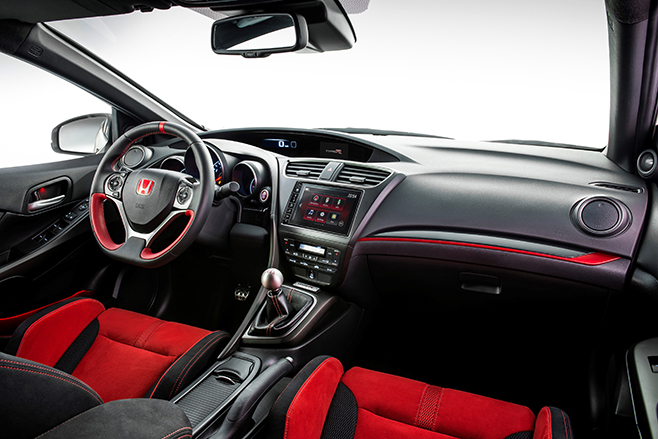 Putting 228kW through the front wheels is a big ask, but a helical slippy diff, 235/35 R19 tyres and what’s called Dual Axis Strut Front Suspension gives the Type R an answer. Like similar hardware on the Focus and Megane RS, DASFS – catchy, huh? – isolates the suspension strut from the turning of the front wheels, so more rubber touches the surface through corners. More rubber, more traction, simple.

Wipe off speed with the four-pot Brembos – great pedal feel, great stopping power – point the nose at the apex and mash the throttle, and the rubber bites, you’re sucked through the corner on the perfect line, with grippy Alcantara bucket seats holding you all the while. In the dry there’s no hint of wheelspin or torque steer, and you’ll need excessively optimistic entry speeds to find understeer. Adaptive dampers are a big step over the fidgety last-gen Civic, too, still feeling firm but providing far more compliance; it means you don’t lose confidence bouncing over the road surface. 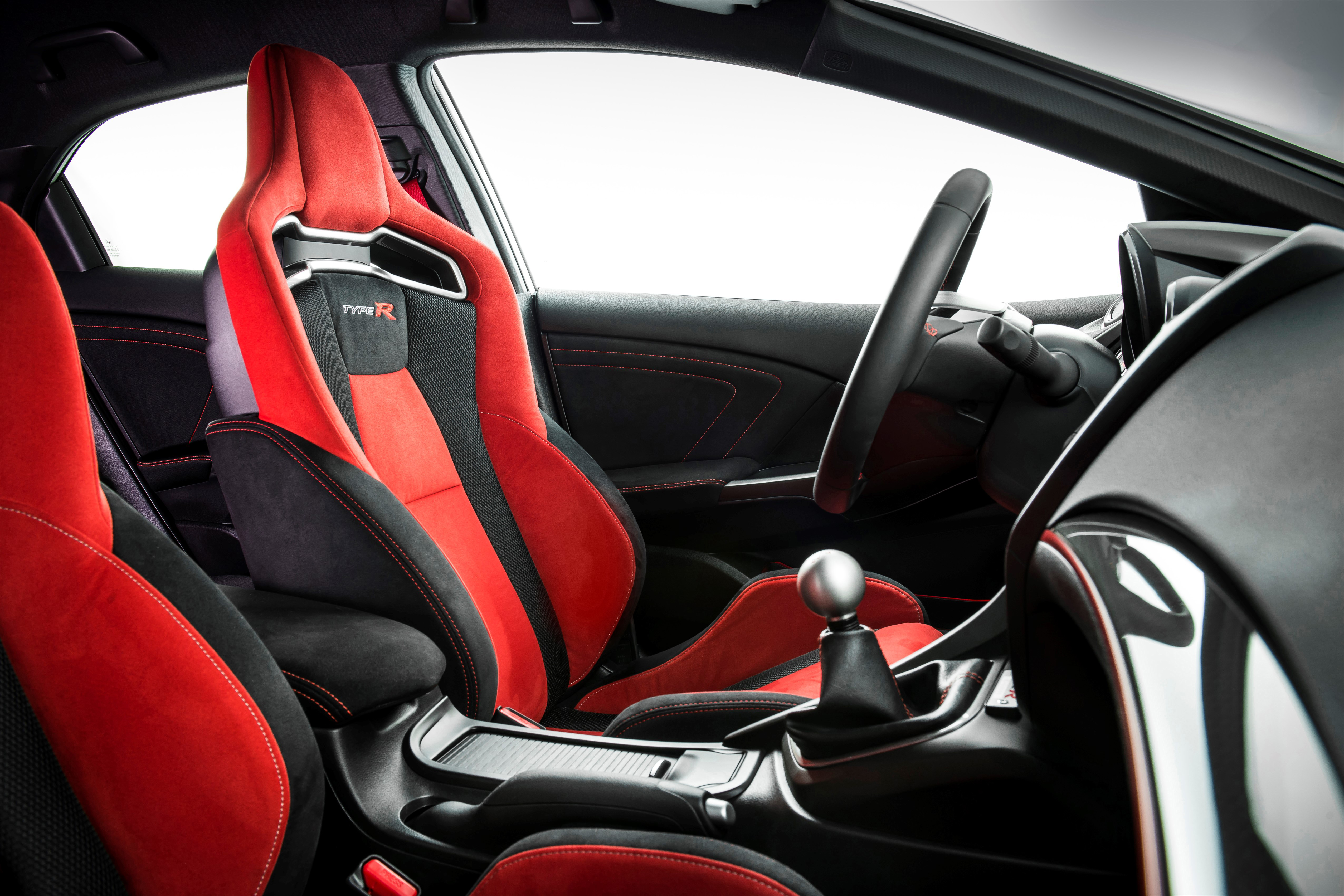 Press the R+ button and hard-core gets harder still. Throttle response snaps from slushy to engagingly sharp, the fast and accurate steering gets heavier for no real reward – sensitive types will already crave more feel – and the adaptive dampers become 30 percent stiffer, which makes the car pogo madly. It’d be nice to tweak each setting individually because really it’s the engine mapping that’s the big win here, the steering tolerable, suspension feeling downright daft for the road.

That’s a criticism you could level at the body styling, too, but Honda says the vents in the front wings and behind the front wheels are essential to release heat from the crammed engine bay, and the spoilers and sideskirts and stick-on bits elsewhere team up with a nearly flat under-floor for genuine downforce. Proceed straight to jail if you detect any of that on the public highway. 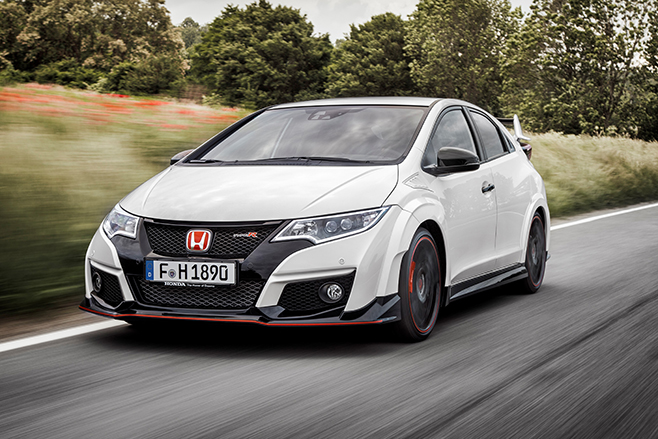 There’s much to admire about the Civic Type R, then, because this really is a hot hatch to give double-the-cash performance cars a headache. But the Megane RS remains the more tactile and interactive machine, and that’s still where we’d spend our cash.

Well, this has seemed a long time coming. But the Honda Civic Type R is here, and it arrives not short of mechanical promise.

For a company with the Integra Type R in the back catalogue, that’s quite something. Especially given this is the first Honda to get both VTEC variable valve timing and a turbocharger. That’s unusual; Type Rs are traditionally naturally aspirated and rev to the stratosphere. 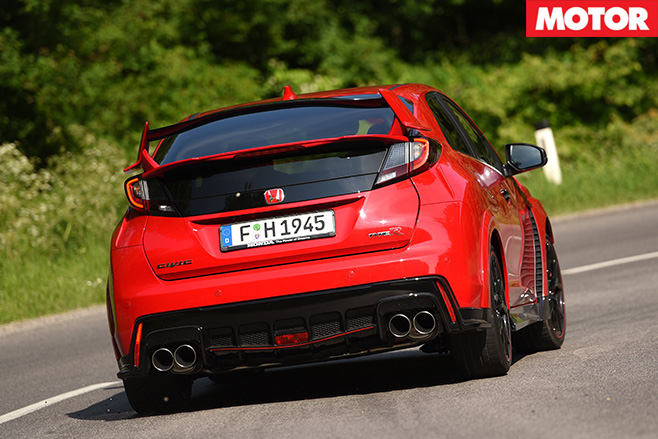 This one only revs to 7000rpm. On its way there it passes peak power at 6500rpm and peak torque from 2500rpm. So far, that’s decidedly un-Type R and more like a Volkswagen Golf R or Renault Sport Megane.

Drive to the wheels is also more like the Renault. Honda has tasked the Civic with deploying quite a lot of poke through only the front wheels via a mechanical limited-slip differential.

To achieve this, Honda has fitted dual-axis strut front suspension – as Ford, Renault and Vauxhall already have. Honda says this will reduce the torque steer effect by 55 per cent. 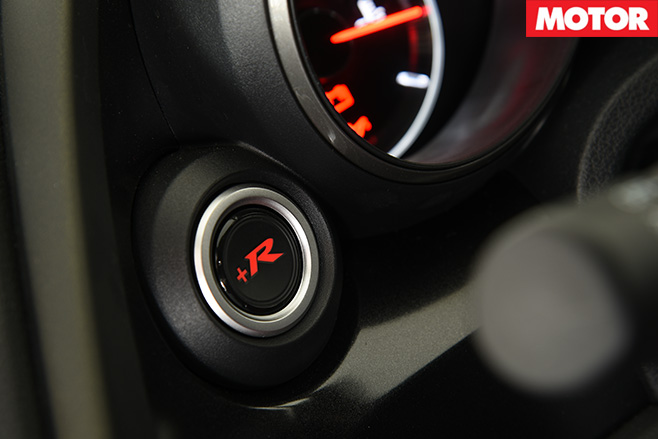 Elsewhere, a torsion beam takes care of the rear suspension (not necessarily a bad thing), the steering is electrically assisted and there are magnetorheological adaptive dampers. Those dampers can be placed into two modes – stiffer if you push a ‘+R’ button on the dash.

Honda’s making quite a big song and dance about the Civic’s speed around some German race circuit or other. The ‘+R’ mode is optimised for that circuit, so as well as stiffening the dampers, it firms up the steering, increases throttle response, and reduces the intrusion of the stability program. And – woo! – the dials turn an angry red.

Not as angry as the outside, where the Type R is generously winged and vented. Honda says that the various addenda on the Civic’s five-door body are present for aerodynamic or heat dissipating purposes; they’re not for aesthetics. I should hope not. Graceful it isn’t. 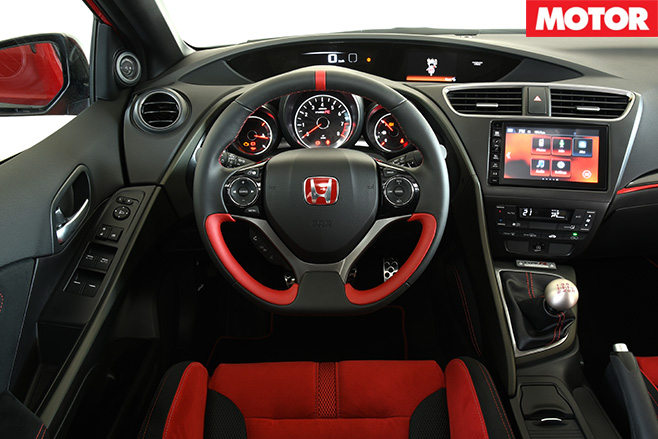 Inside, things are more like you’d expect. There are exceptional seats with a mostly-decent driving position, although the steering wheel too easily obscures the speedometer; a potential issue in a car with 228kW and sporting intent. And there’s a pleasing, aluminium gearknob for the six-speed manual gearbox (there’s no auto option).

That’s fine, especially when you consider how good the control weights are. The throttle and brake could be closer to ease heel and toeing, and the gearshift could use a little less notch, but I’m picking holes here. Mostly, the Civic’s an easy a car to drive.

The engine’s docile, too, which makes for brisk progress at fair to middling inputs, though there’s obvious turbo lag at lower revs. Which, if you care to get all philosophical, isn’t particularly Type R at all. 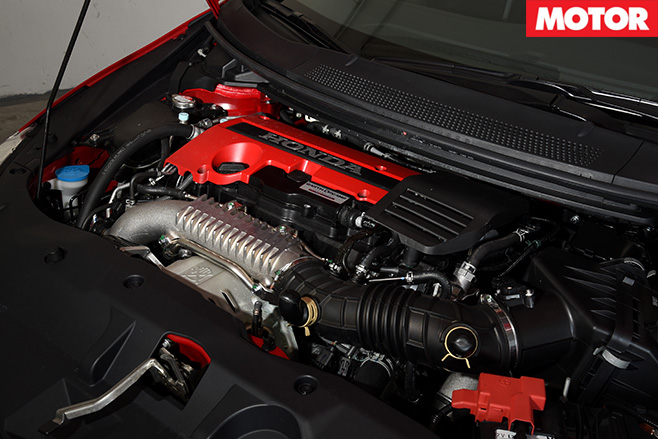 Things don’t get any more traditional as you work the engine. The Civic is fast, no question. By gum it is. Honda claims 0-100km/h in 5.7sec, and it’s hard to make a front-driver accelerate a great deal quicker than that. It’s extremely punchy through the mid-range too, but it gets boomier towards the limit.

Our test car only had 1930km on it, but a recent test Renault Sport Megane felt freer revving at the same mileage. There’s no denying the shove, mind you. This is an exceptionally capable car.

Ditto, it’s capable when it comes to ride and handling. Or the handling, at least. A fuller judgement of the ride will have to come until we drive it on roads bumpier than the cricket wicket-smooth tarmac we’ve driven the Civic on today. 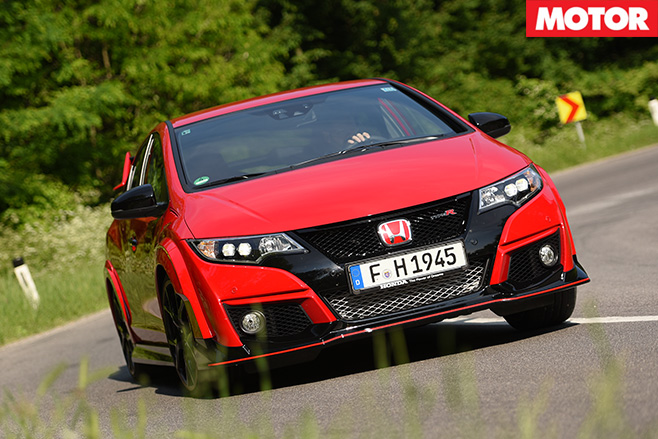 I think it’ll be firm but controlled in standard mode, and all but unbearable in ‘+R’. But with the right switches pushed there’s no doubt that the Type R grips fairly heroically on a circuit, while its limited-slip differential keeps the front end tight when you ask for big power demands. There’s some throttle adjustability here, too.

There’s no question it’s promising – and doubtless effective at posting a sub-eight minute at you-know-where – but there’s more to life than that. If you’re looking for the last word in communication and engagement, the Type R isn’t the car to provide that.

The steering, consistent and accurate though it is, is less impressive than the mechanical grip; it’s a less engaging steer than the one you get through Renault Sport’s feel-some rack. Likewise I think, although I’d want a back-to-back test to be sure, less torque steer gets through to the Honda; at the expense of some precision and insight. 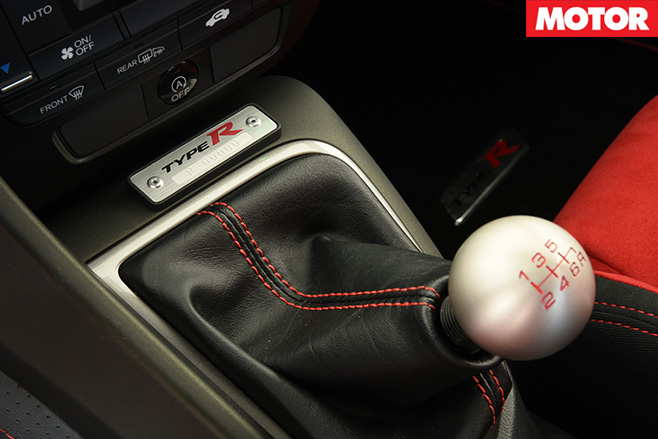 Despite Honda’s work on the front end, it’s a compromise impossible to circumnavigate in a really powerful front-driver. When you knock back torque steer, you knock back road feel. So in the Honda there are only muted tugs at the rim, but likewise less immediacy with the road.

Not that it’ll matter to everyone. That the Type R is wilfully different to both of its main rivals means Honda has chosen a decent path for it. 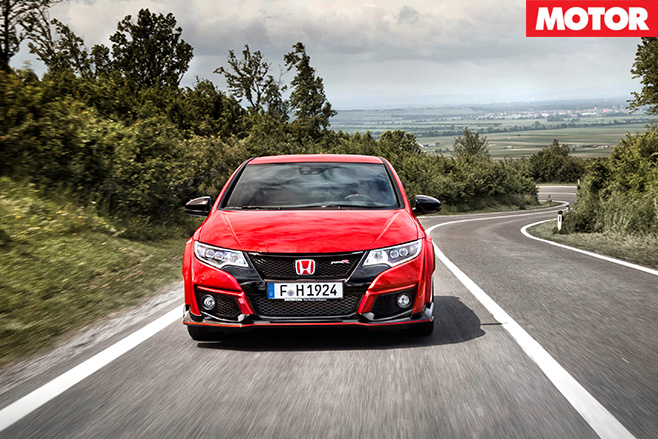 And okay, although it’s not as compelling a proposition as, say, a Volkswagen Golf R or a Renault Sport Megane Trophy, it is probably the most capable front-wheel-drive car in production. There’s something commendable about that.

Click here to read the full range review of the Honda Civic. 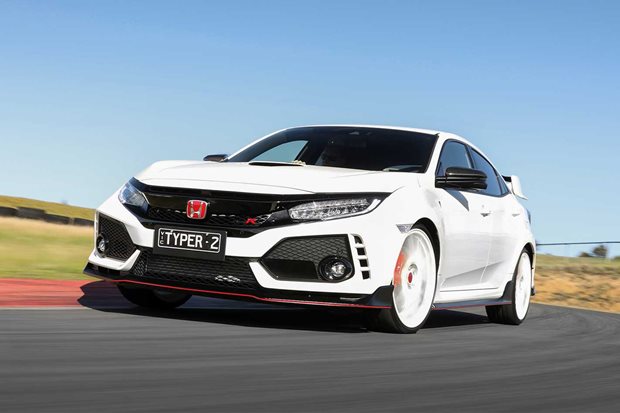