A revolutionary redesign of the world’s most successful roadster has produced a marvellously joyful car, a first drive on Australian soil confirms

A revolutionary redesign of the world’s most successful roadster has produced a marvellously joyful car, a first drive on Australian soil confirms.

WHAT IS IT
Perhaps the world’s most beloved roadster, and certainly its most successful, with almost 1 million Mazda MX-5s sold. The new version has had a revolution rather than evolution redesign, has lost weight and has had the driver’s seat lowered by 20mm, yet it remains a simple, small, rear-wheel-drive layout. We’re promised it will be even more wonderful to drive than the last, which is a big promise, and it’s now being offered with either a 1.5-litre or a 2.0-litre engine.

WHY WE'RE TESTING IT
It’s a car that many people are extremely excited about, us included, and with only the 1.5 available to drive at launch we’re curious to see if it has the grunt to live up to the legend. The MX-5 has never been about outright speed, but offering it with such a small engine could turn it into a slug, at least at the $31,990 entry point. We sure hope not.

MAIN RIVALS
Mazda describes the MX-5 as the only affordable convertible sports car on the market, so apparently it has none. It’s true that, at present, there isn’t much like it available at this price point, but the Toyota 86 convertible is coming. So is the Fiat 124, which is basically the same car - built in the same Hiroshima factory - with an Italian makeover. But it, too, is likely to be more expensive.

THE WHEELS VERDICT
It’s hard to imagine anyone driving this new MX-5 - or even looking at it - and not immediately starting to smile. It feels slightly soft, and the 1.5-litre engine can struggle to haul you up hills, particularly with two people on board, but its light weight, chuckable handling and direct steering can’t help but win you over. There’s something joy-filled about the driving experience, and it really does feel as though car and driver are as one. Perhaps because it’s so damn small, it feels like it’s stuck to you. Can’t wait to drive the 2.0-litre version. 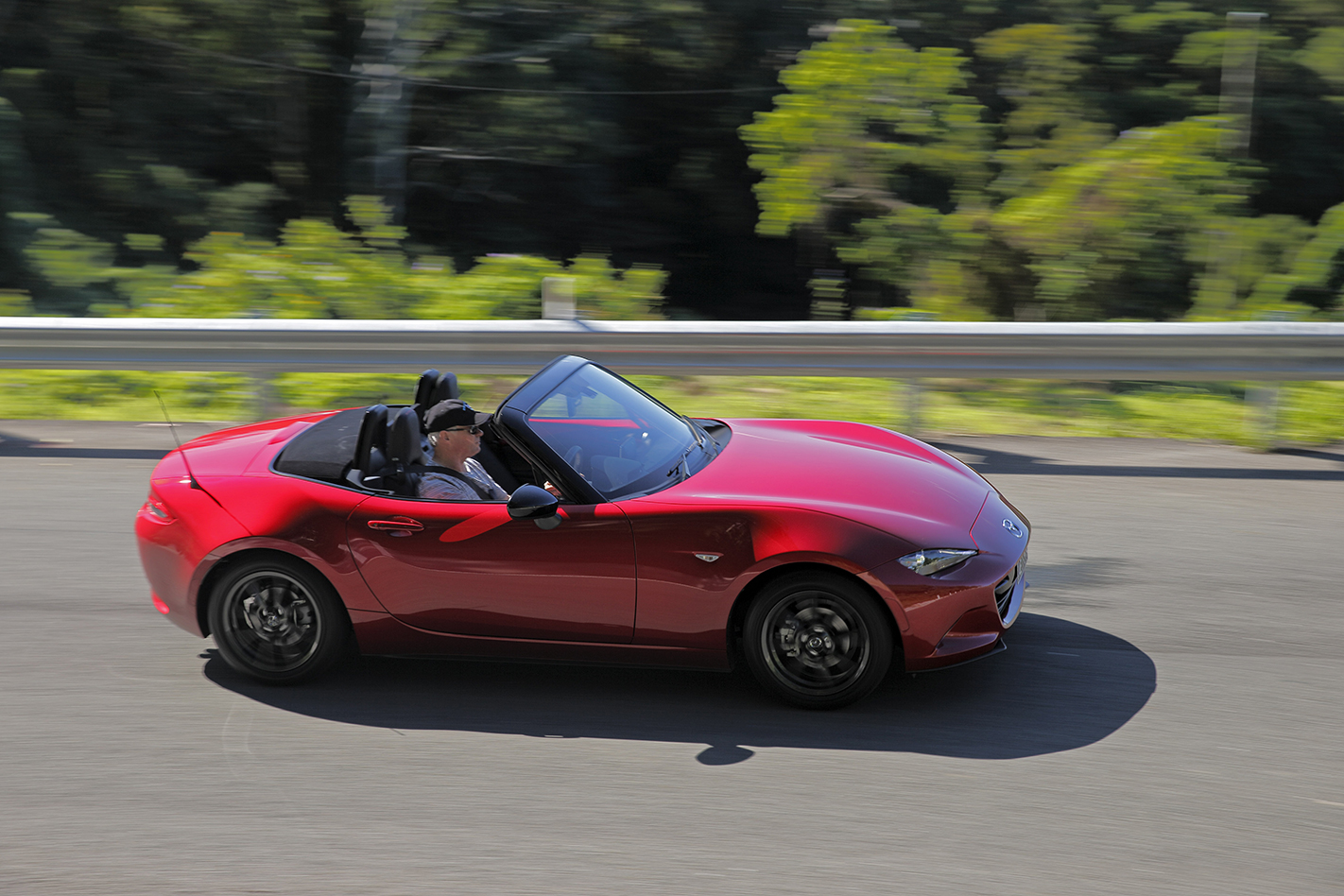 THE WHEELS REVIEW
At first glance, the all-new, fourth-generation Mazda MX-5 seems to have had a striking sex change, going from the smiley, effervescently effeminate roadster the world has loved a million times over to a mean-eyed, menacingly muscular bantam brawler.

A closer look, however, reveals it’s got slightly less in its trousers, at least in the case of the 1.5-litre, 96kW and 150Nm version we’ve just driven at the car’s Australian launch. And sitting inside it reminds you that this is still a car that fits like a pair of Lycra shorts, compared with the silky boxers of a Boxster. 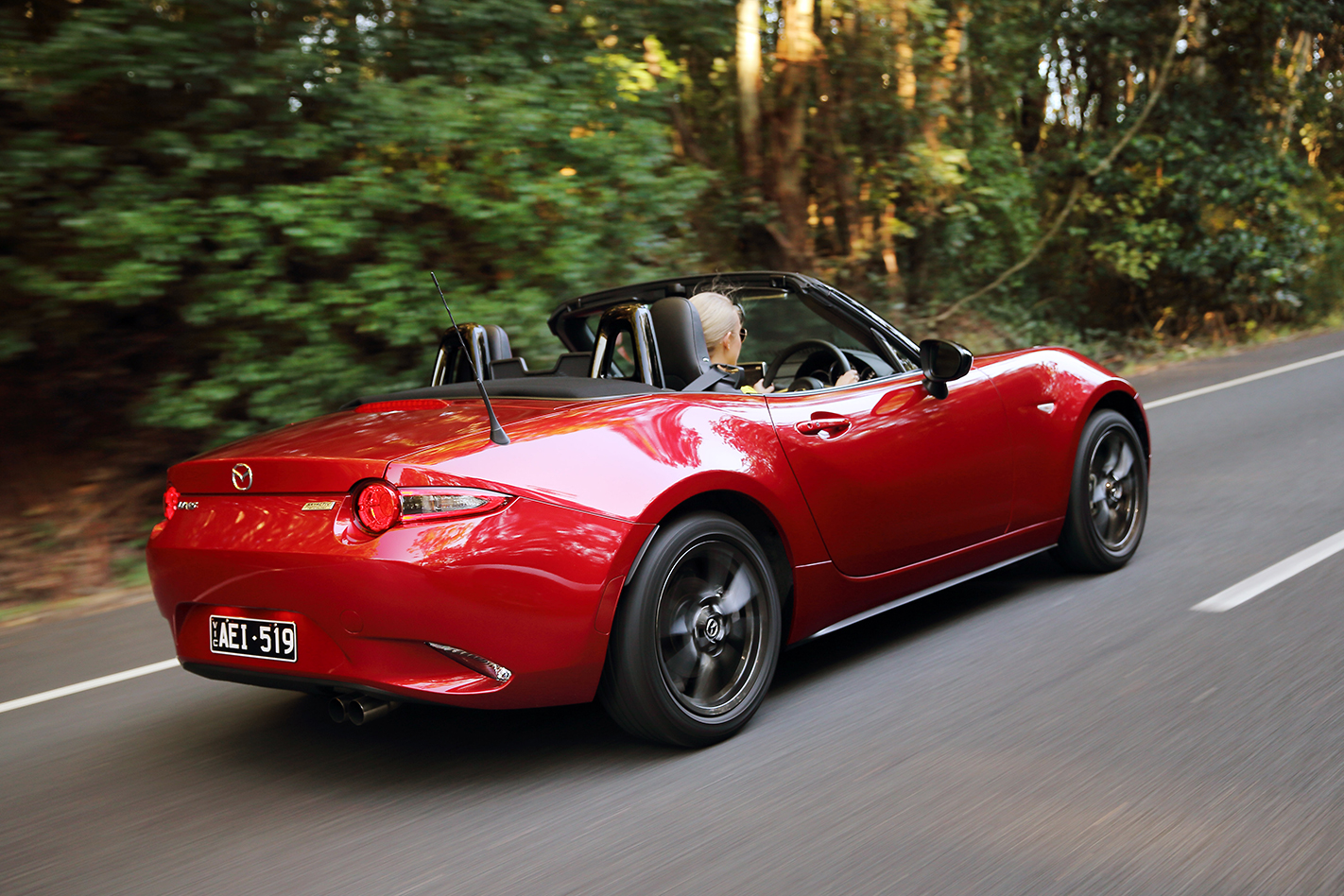 While the full-fat 2.0-litre version that will arrive in November - priced from $34,490 to $39,550 depending on spec level - is expected to appeal to current MX-5 owners and long-term devotees, the company is hoping that the super-light new model will also win a new legion of fans, and possibly increase the number of women buyers.

Mazda’s entire Australian range skews more than 50 per cent female (with the exception of the BT-50), yet the last MX-5 sat at 70-30 in favour of men, despite its cutesy looks.

The reason for that, we might surmise, is that more men were attracted to its purist’s pleasures - the Mazda roadster was responsive, rear-wheel drive and riotously good fun. 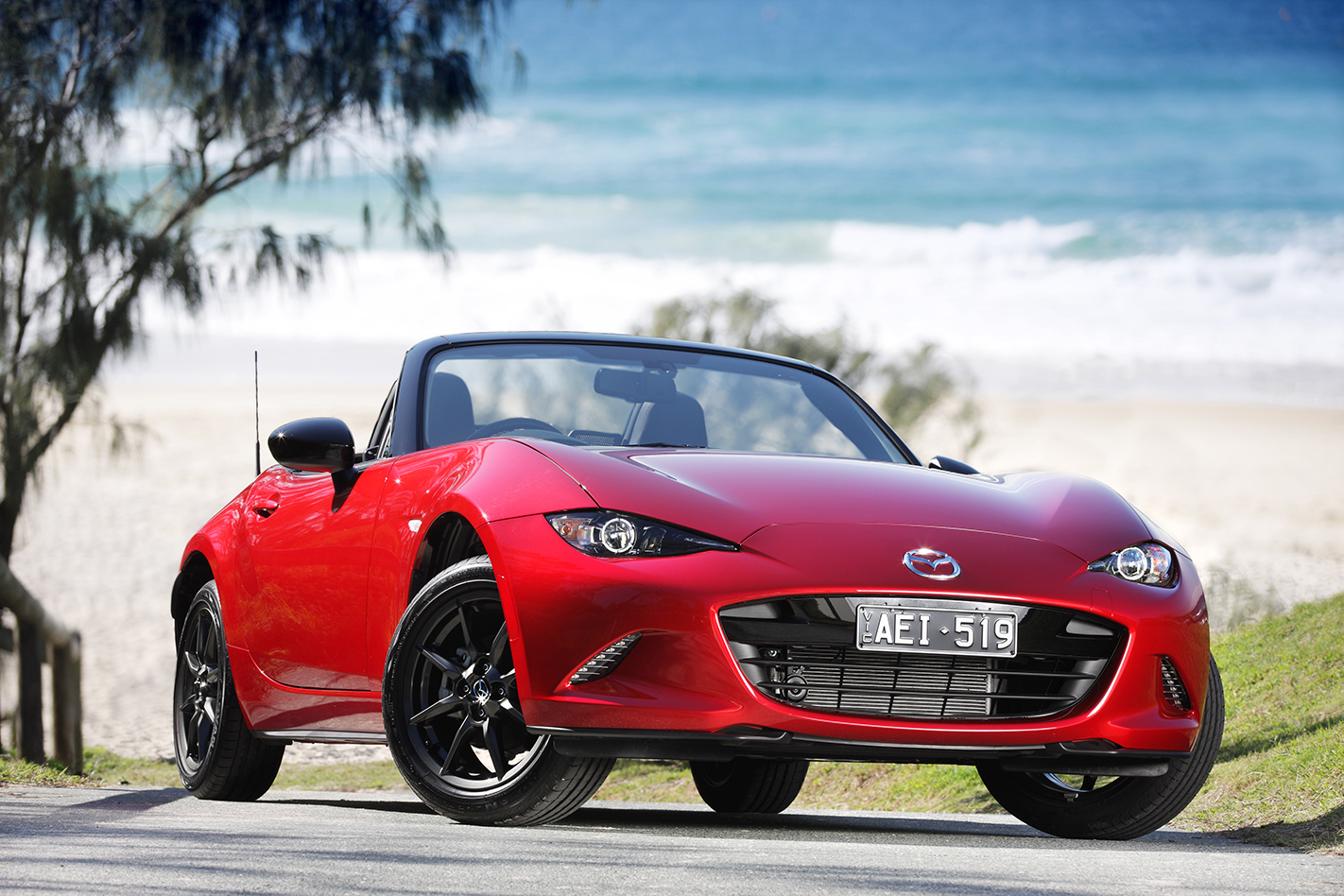 A 1.5-litre version might be expected to fall short on that fun factor, but thanks to a ruthless weight-chopping policy - called “gram theory” - that sees even the seat-slide adjusters shrinking to the size of electric-guitar whammy bars, this new ND model weighs just 1009kg, only 7kg more than the original NA model from 1989.

The power-to-weight argument should therefore be in its favour, except that we somewhat negated the gram theory by throwing the hefty kilograms of two motoring journalists into it, adding some 20 per cent to the load this relatively breezy engine was asked to carry.

It’s an extremely willing unit, though, and one of this car’s greatest joys is that you can spend so much time with your foot flat to the firewall, watching the tacho spin right into the needle at 8000rpm, while the engine buzzes happily away. 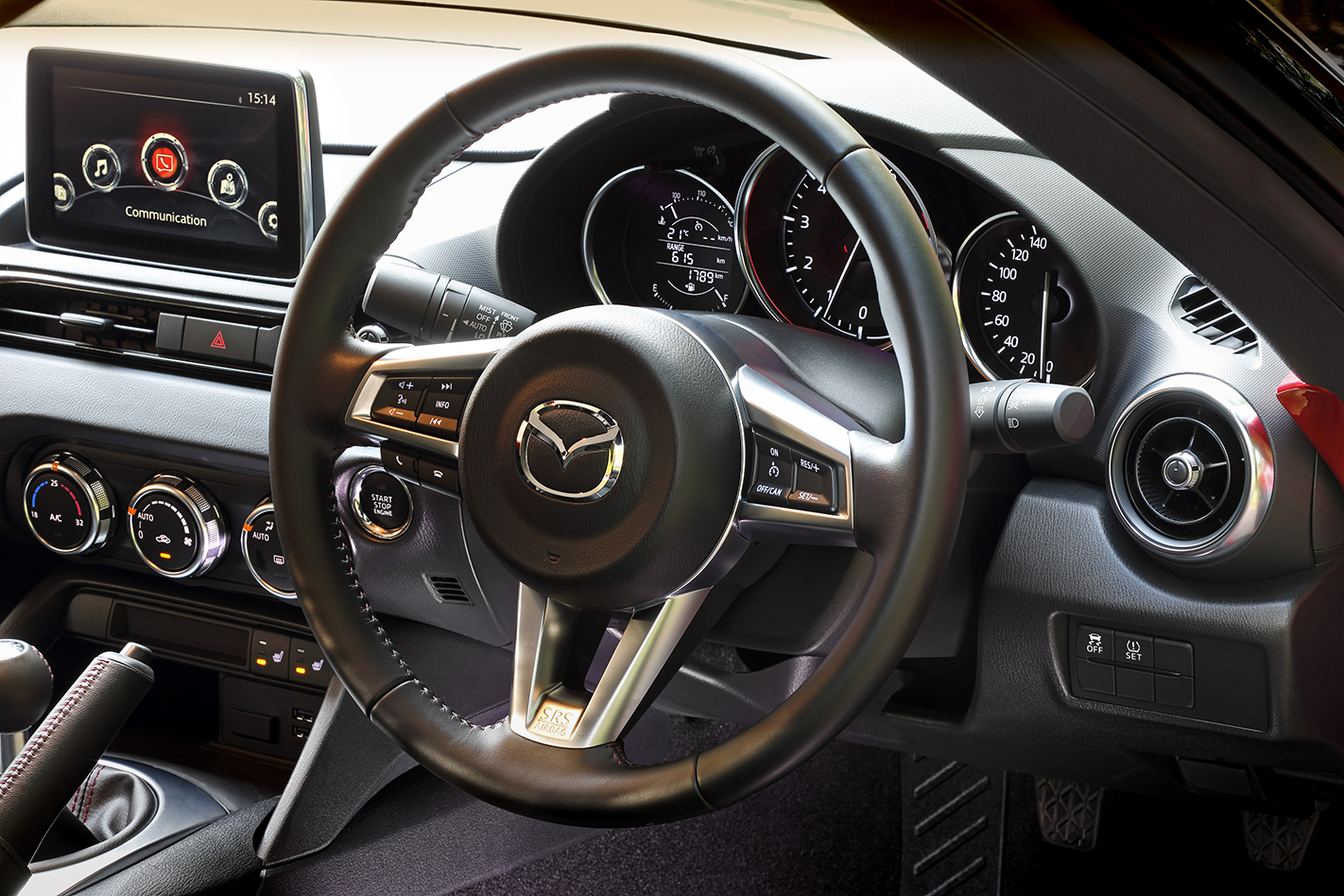 Progress up hills, and even along straights, can be steady rather than spectacular - zero to 100km/h takes 7.3 seconds - but it would have been faster if I could have ditched my companion, who, at 100-plus kg and over 190cm tall, looked like a t-bone steak shoved into a slider bun.

While the wind flowed over my head and merely tickled my ears (I’m a perfectly adequate 177cm), it threatened to uproot his hair. When we raised the roof - a process you can complete with relative ease, even at 110km/h - it only just cleared his bonce.

Normal sized humans will find the MX-5’s interior a pleasingly snug and much improved place in terms of fit, finish and technology, with Bluetooth now standard and clever Bose speakers in the headrest to make it possible to hear callers with the top down. 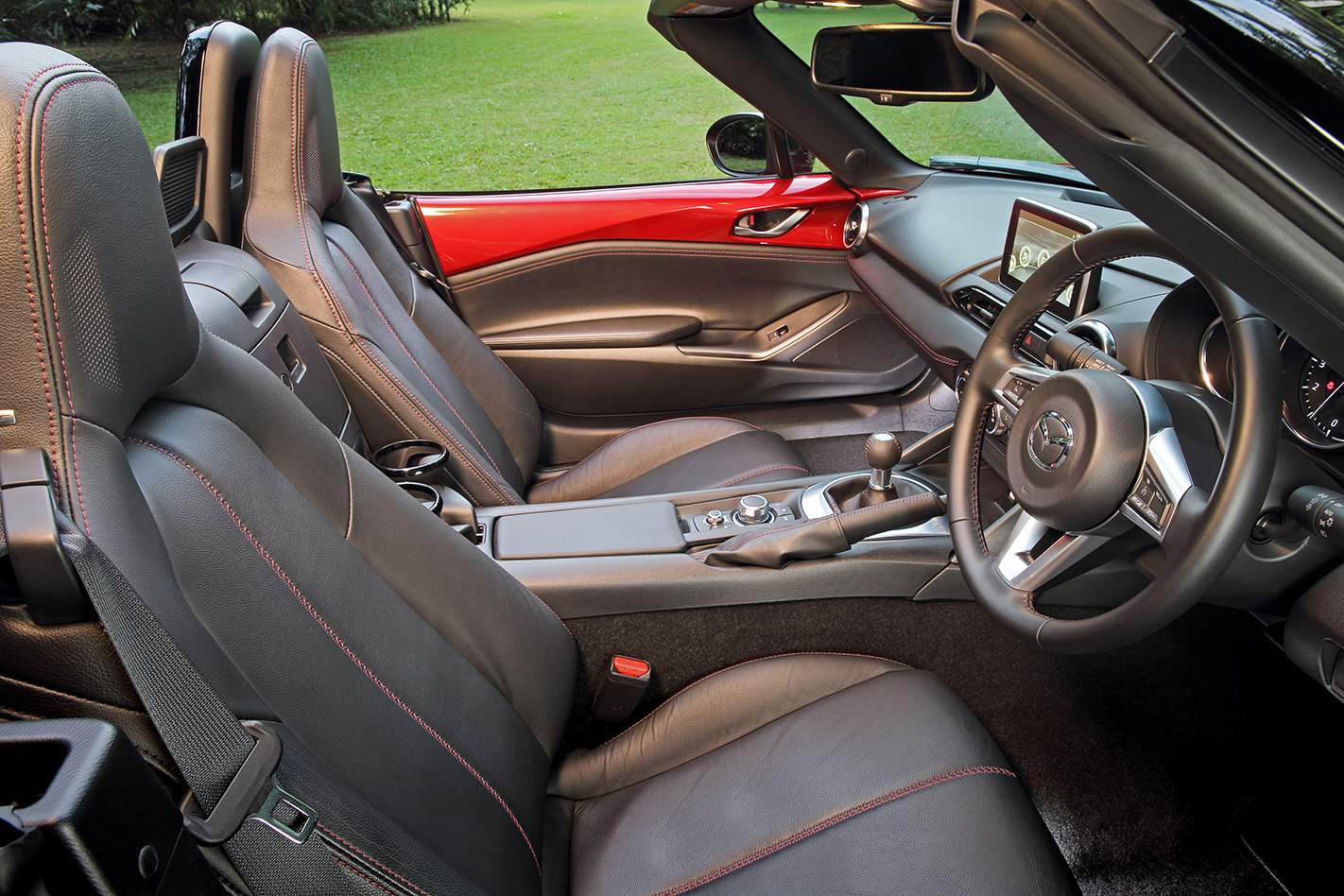 What they’ll appreciate even more is the glove-like way you are connected to the car and how much pure, unadulterated and old-school fun it is to drive, even at entirely legal speeds.

This new MX-5 might look far sharper than ever, and its steering is perhaps more direct on turn-in than before, but it’s actually surprisingly soft and even a little bit body-rolly through turns. While this comes as a surprise in a vehicle that has been so pedantically perfected as a driver’s car, it’s something you grow to love.

There’s something playful, and joyful, about the way this Mazda corners, and you really can hurl it into bends and toy with it using the throttle. But it’s not tied down and Teutonic like a Porsche. Nor should you expect it to be, at less than a third the price. 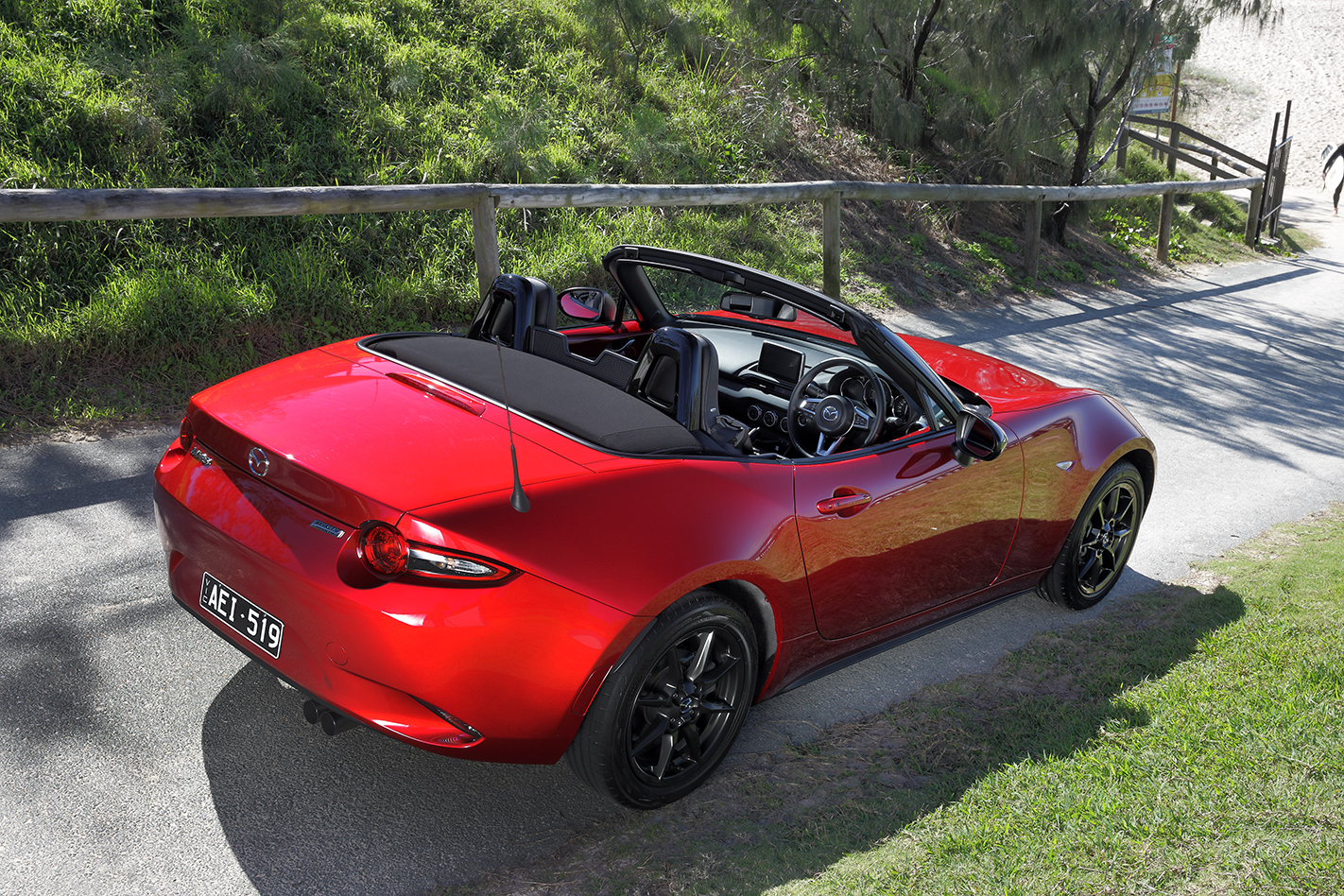 It’s not particularly fast (although the 2.0-litre is coming for those who require more pace, and 118kW and 200Nm) but it is fantastically fun, and thus a worthy inheritor of one of the world’s most beloved badges.

Absurdly, some 40 per cent of people will choose the automatic version, which is a shame because the short-throw manual, and the perfect heel-and-toe pedal set up, make shifting yourself such an integral, invigorating part of the drive.

Buyers, who are already lining up (Mazda has taken some 9000 enquiries), are going to have an absolute hoot driving it, even if they do choose the 1.5, which is predicted to take half the volume. 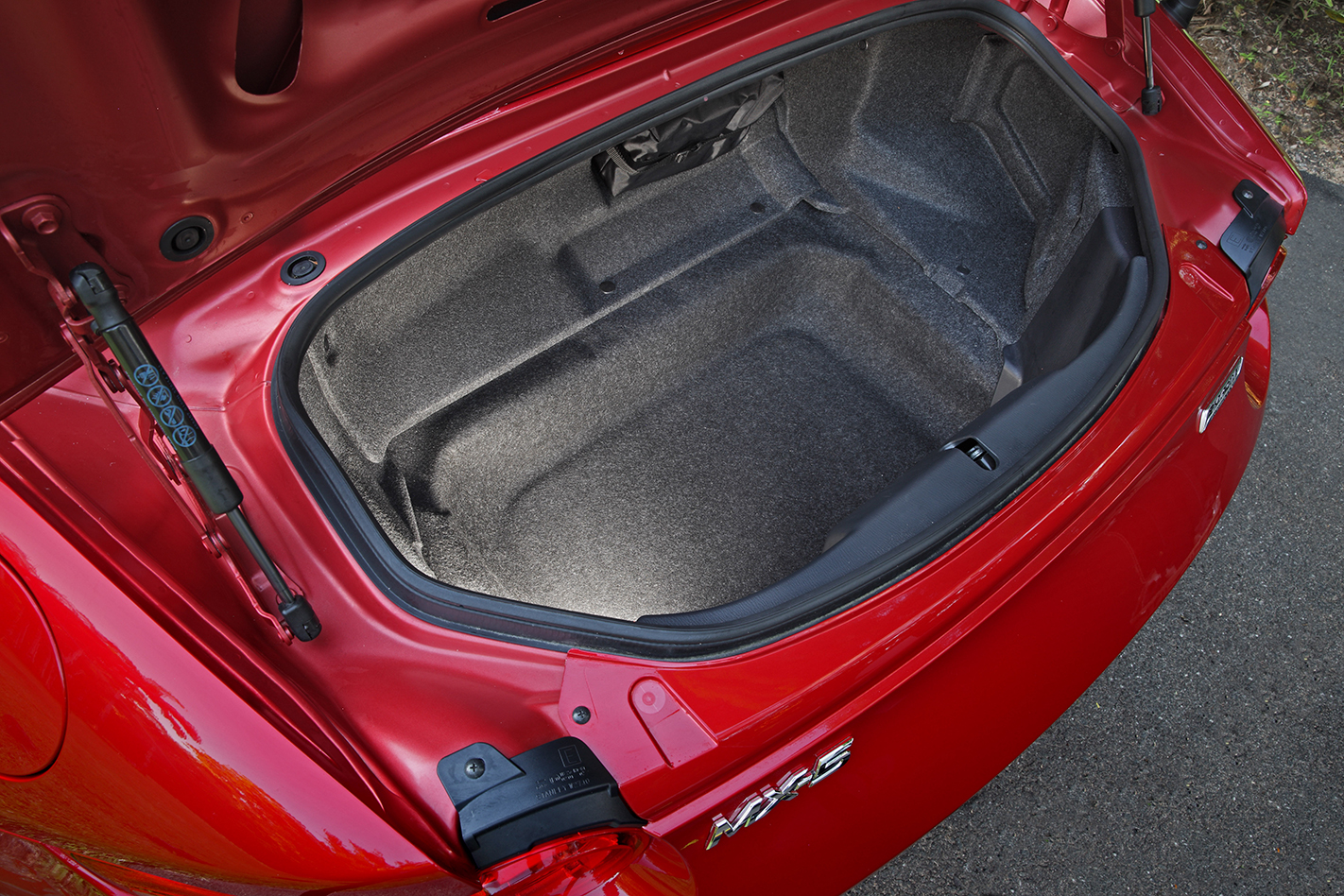 And, for the first time ever, they’ll look properly fantastic, and not at all hair-dresserish, while doing so (particularly if they tick the Soul Red paint option, for just $200, and take the Kuroi Pack body kit, for $2605).

Not just a sex change, but a sexy one. 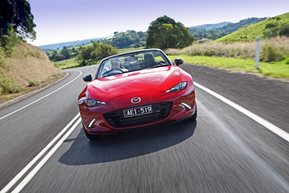