We spend time with the little Italian roadster, with a Japanese skeleton

We spend time with the little Italian roadster, with a Japanese skeleton.

WHAT IS IT?
Fiat’s brand new performance flagship, the Abarth 124 Spider. It’s based on our reigning Car of the Year – the Mazda MX-5 – but has a more powerful, turbocharged engine and an even greater emphasis on performance, courtesy of firmer suspension and stronger brakes.

WHY ARE WE TESTING IT?
Because on paper, this is one of the most important cars Wheels will drive this year. Keen pricing, boosted equipment and turbo performance mean it could deliver a more convincing package than its Mazda twin. If Abarth hasn’t mucked it up, that is… 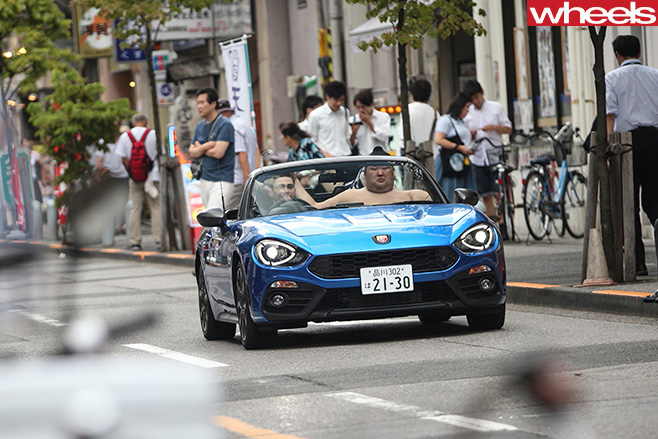 THE WHEELS VERDICT
So much more than a rebadged MX-5. Sure, the Abarth’s Japanese bones are obvious, but its unique styling, plusher cabin and turbo personality ensure it has its own, distinct character. Fiat is yet to reveal pricing, but if it lands in the low-$40K bracket, it’s a worthy rival to our reigning COTY.

PLUS: Character; handling; performance; price and equipment
MINUS: No reach adjustment on the steering wheel; not as pure as an MX-5 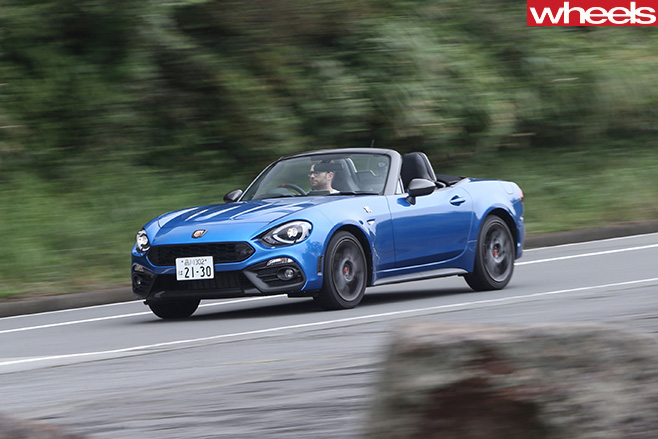 THE WHEELS REVIEW
IT’S A scene of total, yet strangely organised, chaos. I’m at Fuji Speedway in Japan, standing in pit-lane as 100 Abarths roll haphazardly towards me, their drivers trying, and failing, to maintain neat, organised lines. Wheels is here to become the first Aussie outlet to taste Abarth’s new halo model – the Abarth 124 Spider - and Fiat has also invited a large group of current owners and prospective buyers, the day culminating in a parade down Fuji’s enormous, 1.4km straight. Most drive Abarth 500s, and some have even embraced the brand’s mystique so wholeheartedly, that they’ve tattooed their faces and necks with temporary scorpions.

Beyond Fuji’s straight, their squealing tyres echoing off the huge grandstands, a group of drifters hurl Toyota Chasers and AE86s around a purpose-built circuit. 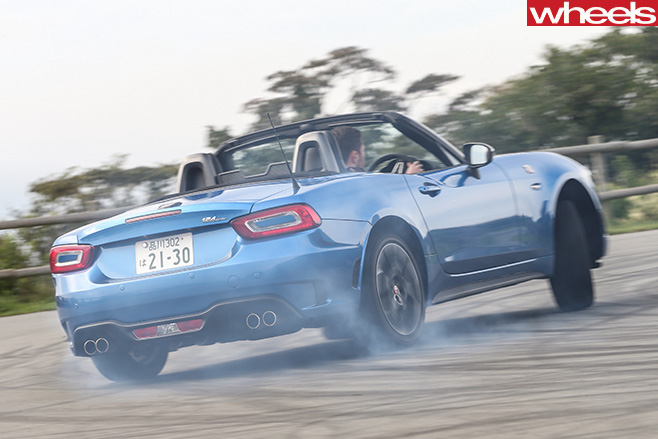 It’s a clash of cultures, which is rather pertinent, given the 124 Spider’s multicultural heritage. You see, as much as Fiat will tell you its new performance halo is an Italian thoroughbred, underneath it shares much of its mechanicals, and interior parts, with our reigning Car of the Year – the very Japanese, Mazda MX-5. The Abarth is even built in Japan, at Mazda’s Hiroshima HQ.

Yet it’d unfair to dismiss the Abarth as a rebadged Mazda. It’s more Italian than that, thanks to the devil in its chassis tuning. Abarth’s engineers wanted a package that felt racier and feistier (read more Italian) than a MX-5, so they fitted stiffer suspension with Bilstein dampers, larger four-pot Brembo brakes and a standard LSD. They’ve upped the power too. Lurking beneath the Abarth’s wide, blunt bonnet is a 1.4-litre turbocharged four-cylinder petrol, tweaked to produce 125kW/250Nm. That’s 7kW/50Nm more than you get in the most powerful MX-5. 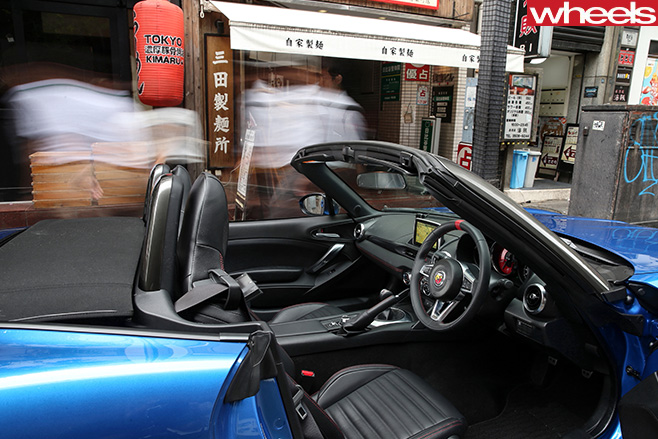 Initially, though, it’s easy to think Abarth has dropped the ball. Below 3000rpm, with the turbo off boost, the base engine feels sluggish. Anaemic even.

Wait for the tacho needle to rise, however, and the turbo soon has its wits about it. Around Fuji the Spider feels surprisingly swift (Abarth claims 0-100km/h in 6.8sec) and it pulls hard to the 6750rpm cutout.

It sounds good too, courtesy of quad exhaust outlets, and then there’s the slick, mechanical-feeling gearshift, which makes swapping cogs a joy. The handlings not bad either. Through the bends the Spider’s firmer suspension means it feels more locked down than an MX-5, and more composed, yet its chassis remains brilliantly balanced. 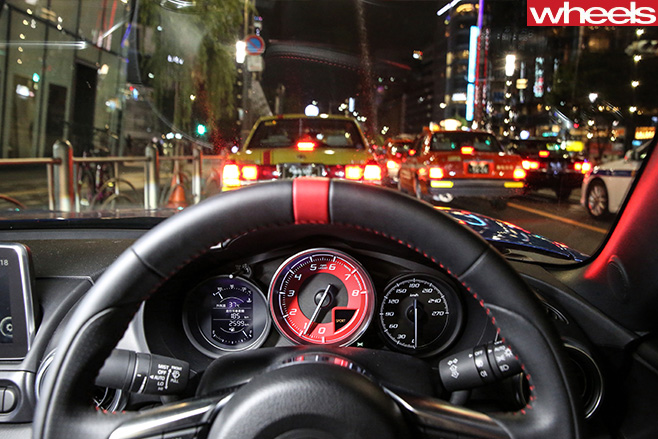 It’s inside where you feel the Mazda connection most. Here, the dash design, central infotainment system, seating position and steering wheel (still with no reach adjustment!) are all pure Mazda. However, there are softer touch materials on the doors, the cabin feels slightly larger and the leather seats are more supportive. There’s also a standard reversing camera, which is a glaring oversight in the Mazda.

Does all this make it better than an MX-5? The purists will say no. It’s not as true to the barebones, rear-drive roadster philosophy that the MX-5 nails. Where the Mazda comes alive high in the rev range as you wring every last drop of performance from its engine, the Abarth’s turbo donk and torque-rich mid-range mean it’s lazier, more muscular, and more relaxing to drive everyday. So while it mightn’t be quite as rewarding, it’s a more convincing all-rounder. 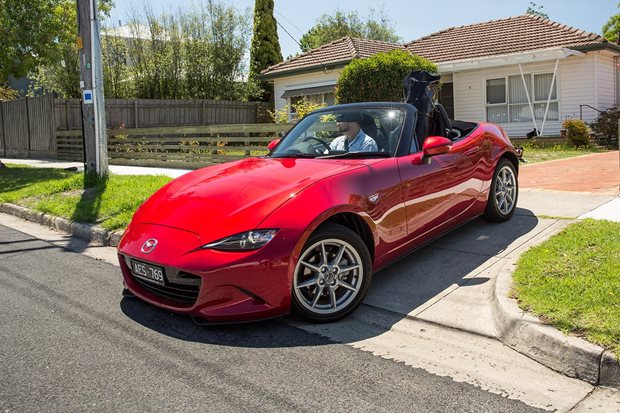 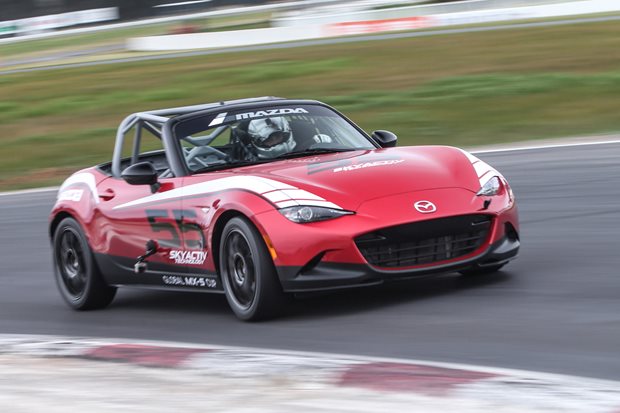 Like a normal MX-5, only better. And faster. And bett…oh wait.