THE Abarth 124 Spider roadster may only be a month away from its Australian launch, but there’s already excitement about it being joined by a rumoured coupe version.

British motoring magazine Autocar reckons a turbocharged Fiat 124 Coupe is believed to be under development and could be revealed as early as next year.

The Fiat 124 Spider is heavily based on the Mazda MX-5. While Mazda’s version of the bang-for-bucks two-seater is getting a hard top version with a retractable targa roof, the word on the street is that the Fiat will have a bespoke solid roofline. 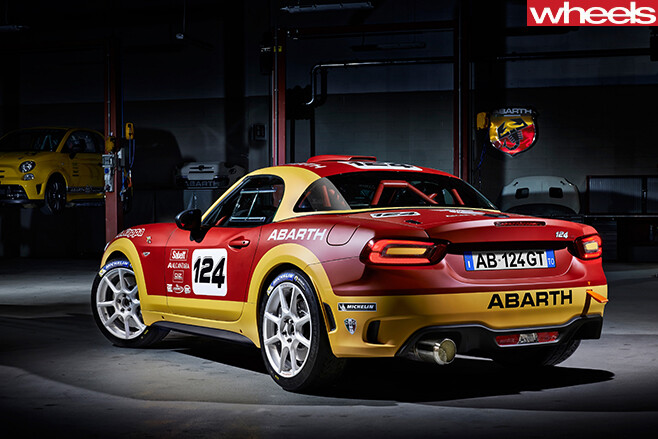 The Mazda factor provides fodder for both the believers and detractors.

On one hand, a decision to separate the Fiat 124 from the Mazda MX-5 would create greater space between the two models in the minds of potential buyers, and allow Fiat to further push its own performance credentials.

However, a coupe conversion presents a significant engineering undertaking, and there are doubts that Fiat would make such an investment to go it alone without Mazda’s involvement. Perhaps Fiat could offer coach-built modifications as it did with the Fiat Dino, Fiat 850 and the original 124 back in the day, though these would be considerably more expensive than factory produced versions.

For its part, FCA Australia says it knows nothing about plans to make a coupe.

“We have heard nothing about this car and right now, we’re focusing on launching the Abarth 124 Spider here in Australia next month”, FCA spokeperson Lucy McLellan told Wheels. Would FCA distribute a Fiat or Abarth 124 Coupe, if only to give the Toyota 86 and its closely related Subaru BRZ sibling a run for their money?

“Whenever anything becomes available for the Australian market, we look very carefully at it, but in this instance we haven’t heard anything so I can’t comment,” says McLellan.