It has already angered the fun-police; we belt the brand-new Ford Focus RS.

WHAT IS IT?
The pinnacle of Ford Performance’s expertise when it comes to building a no-prisioners, all-wheel-drive turbo hyper-hatch

WHY WE’RE TESTING IT
It’s just gone on sale in Australia, and we had to know if the extraordinary abilities we experienced in our first overseas drive translated successfully to Australian roads. Spoiler alert: they do. THE WHEELS VERDICT
At the risk of a big, potentially premature call, we reckon the new RS may just reset the paradigm for affordable, exploitable performance available in a practical five-door body. If you can find anything near the $50,990 tag that can keep it in sight, buy a couple.

PLUS: Takes the hyper-hatch into a new on-limit dimension; wicked speed and involvement for the price; (mostly) pretty liveable package
MINUS: Non-height adjustable seats will be too high for some; urban ride ultra-firm and a bit jiggly, lack of individual adjustment for steering, engine mapping, etc; kindergarten-spec instrument graphics

THE WHEELS REVIEW
It’s probable that you’re already aware of a driving mode offered in Ford’s scalding new Focus RS that allows the shift of this hyper hatch into a dynamic realm not previously explored by any other manufacturer. What you may not be aware of, is a rumour building that suggests that if all 500 impending Australian RS owners (and we’re confident Ford’s current allocation will sell out) were to activate their Drift mode simultaneously, the collective brains of those who oppose any inkling of fun may explode. 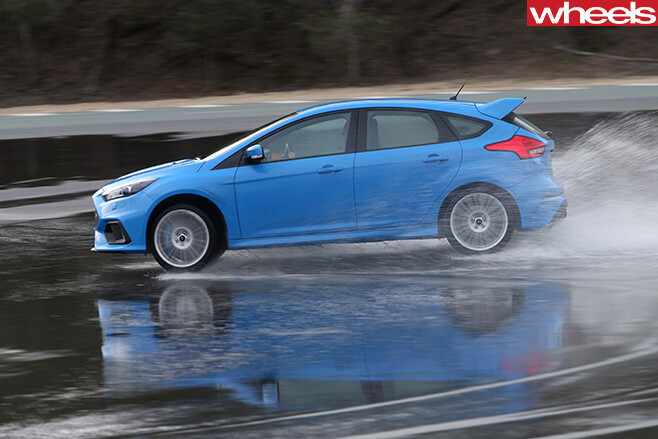 Haven’t heard that one? Okay, maybe it just needs a bit more time to gain traction. But it’s not possible to get into a dynamic analysis of the new Focus RS without first touching on the car’s infamous Drift mode, and at the same time, attempting to apply a cool washcloth to the forehead of the imminently-apoplectic wowsers.

Because the fact is, while Drift mode somehow underscores the engineering philosophy of the Ford Focus RS, it in no way reduces the car to a showboaty, hoon-hatch freak show. Instead, the inclusion of this clever feature shows what Ford’s RS engineering team thought was lacking in the ultra-fast five-door competition. “The greatest way to ruin a really awesome corner is with on-limit understeer,” points out project boss Tyrone Johnson. You’d like Tyrone. He’s a car guy’s car guy, and he knew from the conception phase of the new Focus RS that he didn’t want a car that was ultimately a bit dull and one-dimensional to drive at the limit. Yet for this third-gen model, all-wheel drive was seen as essential to delivering the traction needed to properly harness the 257kW/440Nm output of the reworked Ecoboost 2.3-litre turbo four. The upshot was that early, Haldex-diff-equipped Focus RS mules were dispatched, presumably in howls of abhorrent understeer, into landfill sites. In came the so-called ‘Twinster’ all-wheel-drive fundaments pinched from the Land Rover Evoque, supplied by British engineering firm GKN. In simple terms, this system – vastly upgraded and reengineered to suit the new application – gave the team what was required: the ability to send the majority of the torque rearward when needed, and split it with great effectiveness between the rear wheels. Combined with the rest of the clever (but not-intrusive) chassis control systems, the result is an all-paw hyper hatch that virtually goads you into bringing its taut rump into play; off the throttle, on the throttle, and possibly even when you’re just reclining the front seat for a quick nap.

First impressions behind the wheel, for me at least, is that the deep, ultra-supportive Recaro seat, once you’ve scaled its tall thigh bolsters on the way in, is set too high. There’s no height adjustment, and also no respite from the kindie-grade instrument graphics, a bland cockpit, and occasionally wonky sat-nav. But that’s where the demerits end. The control weights all feel near-ideal, and the gearshift, while not ultra-short in its throws, is satisfyingly slick yet mechanical-feeling. The steering, too, is super-quick at just two turns lock to lock, but does not benefit from the extra weighting that comes in Sport mode. Here’s the thing, though: at anything less than seven-tenths, the RS is a coiled spring of restless energy, not quite willing to breathe with the road and occasionally making your inputs seems less than fluid. It’s one of those semi-masochistic cars that demands you really scruff it, extend the engine, lean hard on the chassis; properly rag its sticky tyres. Do that and it doesn’t so much come to life, as erupt into a bundle of barely-contained point-to-point fury that feels ready to leave plenty of heavy-hitting performance cars in a $51K vapour trail.

The removal of some sound deadening from the firewall and rear underbody liberate a real full-fruit, get-it-on note from the engine and exhaust. (There is a sound symposer, but it uses actual engine noise, not an artifice.) In Sport mode, there’s a volley of pops and thuds on lift-off that sound like there’s some proper WRC anti-lag trickery going, rather than the slightly contrived artillery division Porsche employed for its new flat-four turbos. Unusually for a turbo, the 2.3-litre four relishes its final, super-smooth lunge for redline, but the car barely feels less quick when short-shifted slightly. 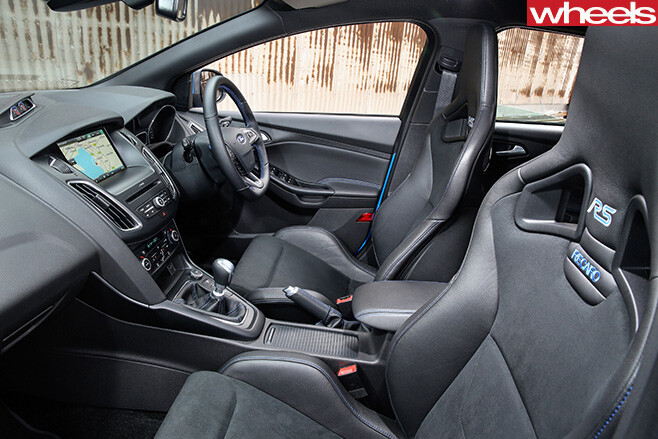 If you have the brain processing power to both concentrate on driving it hard on a challenging road and analyse its dynamic interactions, firstly, well done, and secondly, yes, you will feel some subtle torque-shifting tricks going on via your backside, and the occasional grunt-vectoring twerks of the front end under vicious throttle applications. But go with it, and you’ll feel how the supremely calibrated, quite lenient ESC calibration is in your corner, and how superbly honed and rifle-bolt ‘right’ the car feels as a whole.

As for Drift mode, we were only able to try it on a wet skidpad, and while Ken Block’s job is safe, ample time was spent looking through the side glass. On track, if you have wheel skills, we have no doubt the Focus RS has the dynamic ability to be a howling entertainer. Get in quick before the fun police do the squealing.