Rear-wheel drive, $50K cheaper than the ‘normal’ Huracan and with a suite of subtle changes aimed at making it more fun for people like you and me. And now, we’ve driven it on Aussie soil.

Much like the all-wheel drive Huracan the LP580-2’s 5.2-litre V10 is truly one special donk, indisputably one of the best engines on-sale today. For punch, noise and character, the LP580-2’s V10 is nothing short of epic, a fair whack of the car’s personality. 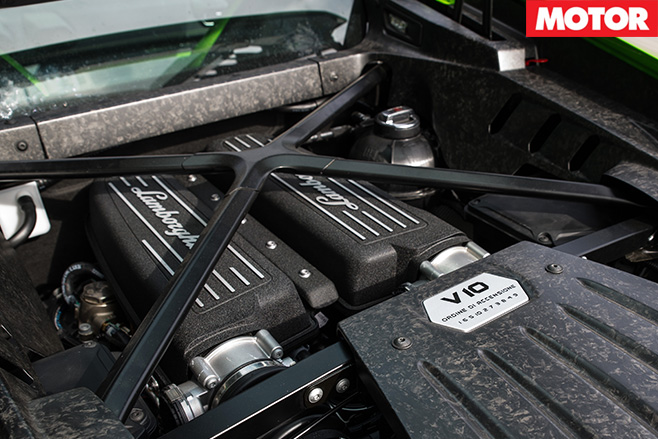 It screams to 8500rpm and makes 22kW, and 20Nm, less than the Huracan LP610-4, and though we can’t help but think it’s to cement a pecking order, we do believe Lambo when they say the car really does need to be wound down a bit.

And the changes aren’t just removing the front claws (which saves 33kg), Lambo fitting 19s instead of the usual 20s because the bigger, flexing 35-profile sidewalls offer more steering feel. On top of that they’ve redone the electric steering software for the same reasons.

It’s lucky our first Aussie taste of the LP580-2 was at Phillip Island because around Wakefield Park you’d sooner know what a killer whale feels like in a tank at SeaWorld. Much like the all-wheel drive Huracan the 580-2’s span of available performance is otherworldly vast compared to the kind of cars we might have at Bang For Your Bucks. 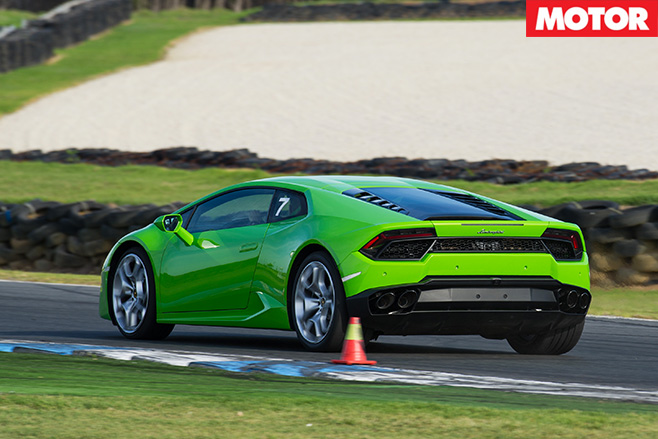 Tipped into corners at 150km/h it shrugs its shoulders, having a relaxed conversation with you. Beyond 200km/h it starts to put its head down. Around a big boys’ track like the Island, it’s eye-opening.

The only hint you get that it’s bipedal is the most nagging traction control light in the world. Pick up the throttle out of corners in what you might presume is a conservative manner and the power is being subtly trimmed as the ESP light flashes away. This thing must be a right handful with the systems off, you’re liable to think.

We don’t know, because on the day Lambo wouldn’t let us switch them off. But it says something that one of the instructors spun a car while giving a hot lap to a passenger. 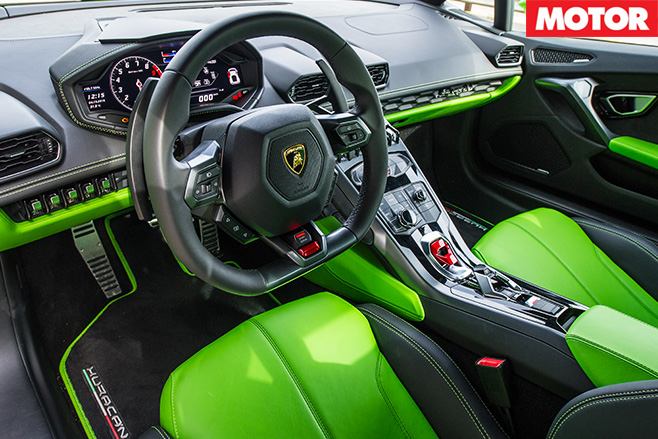 In the most lenient ESP setting, Corsa, we walloped the throttle out of the tight, right-hand hairpin Turn 10 a few times and the LP580-2 sidestepped much like the all-wheel drive model would, except much quicker and looser, such that we felt glad for the lightning-fast rack.

But this is for the better if we’re asked. The 580-2 almost feels truer to old Lambo values of feral-ness than the regular Huracan. You’d buy it just to pocket $50K and with the ESP fully on it’s just as much a pussycat as the all-wheel drive model.

You could buy an SS Commodore with the change and just use it for drift days. But then there’s the dilemma of which you take, it or the 580-2 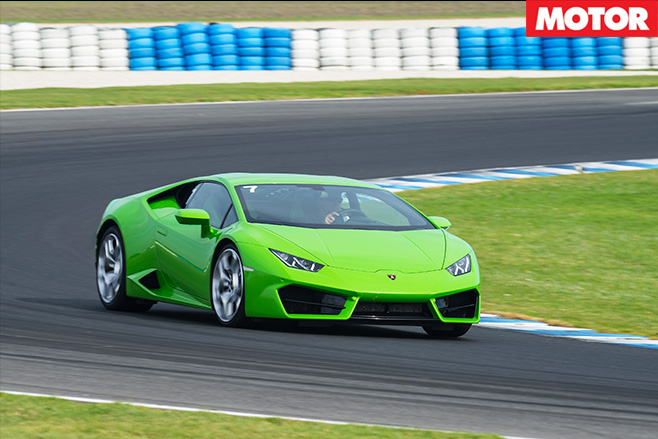 LIKE: Awesome performance, noise, the idea
DISLIKE: Bit bitey (also a good thing?), too inyerface for us