WHAT IS IT?
The Lamborghini Huracan LP610-4 Spyder is the convertible version of Lamborghini’s entry-level supercar. It shares some of its underbody architecture with the Audi R8 but adds a serious helping of Italian flair and personality, and eschews some of the Audi’s everyday friendliness for peak performance – both the straight-line and racetrack variety. All that, and the wind in your hair… 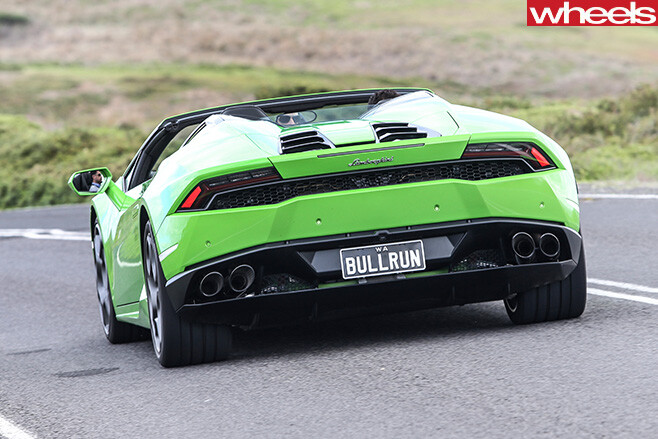 WHY WE’RE TESTING IT
We want to know if the Lamborghini Huracan Spyder is a worthy roofless wonder, or if it falls away from its donor coupe’s peerless dynamics in the name of fashion. According to Lamborghini, the Huracan Spyder was designed and developed in concert with the coupe, which should bode well for its ability to stay true to supercar expectations. THE VERDICT
We needn’t have worried. Despite an extra 100kg, the Huracan Spyder adheres to the high performance standards laid down by its Coupe sibling, albeit ever so slightly tempered. On top of that, the Huracan’s vocal 5.2-litre V10 sounds even better without a roof muting its raucous howl. Plus, it’s even more eyecatching than the coupe, if that’s possible.

THE WHEELS REVIEW
IF THE thought of blow-drying your hair from 0-100km/h in 3.4 seconds interests you, or upping your vitamin D intake 17 seconds after the electric folding hardtop does its thing, the Lamborghini Huracan LP 610-4 Spyder could be the car for you. Of course, an equally valid purchase motivator is the yowling 5.2-litre V10 soundtrack, every decibel of which now has unfettered access to your ears without a roof to mute the joy.

Lower the narrow rear window between cabin and engine bay and the sound will smash you from two directions at once like a Wallaby double-tap. That gloriously symphonic – and definitely un-PC – crescendo of intake, engine and exhaust howl is, in my humble opinion, the Spyder’s greatest asset. It’s why you let each gear rev right out even when you’re not setting lap times, the scream becoming more torrid and triumphant the closer you get to the 8500rpm limiter.

It’s also a reason you drive roof-down on a wintry Melbourne morning risking frostbite. And it’s a reason to change your opinion of tunnels from smog-filled hellholes to cavernous amplification devices. 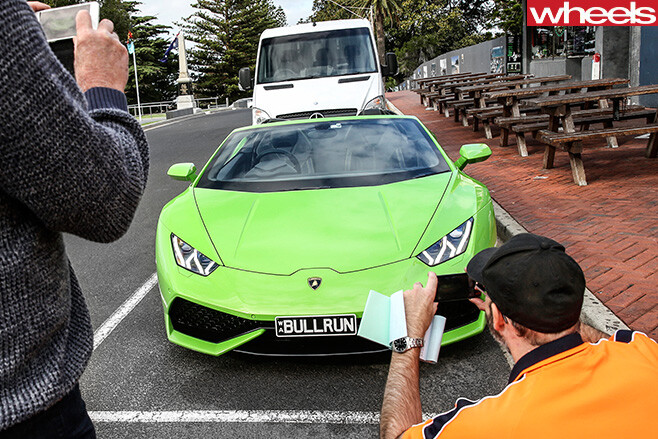 Those considerable benefits to roofless motoring come at considerable cost. The Spyder’s $471,000 price is $43K more than the Coupe’s, and apart from the electrically folding soft-top roof, there’s no other equipment to justify the 10 percent tariff.

Lopping the roof off a performance coupe can often dilute dynamics due to lost rigidity or the additional weight of extra chassis members. With the Huracan, going roofless sacrifices little of the Coupe’s considerable dynamic talents. 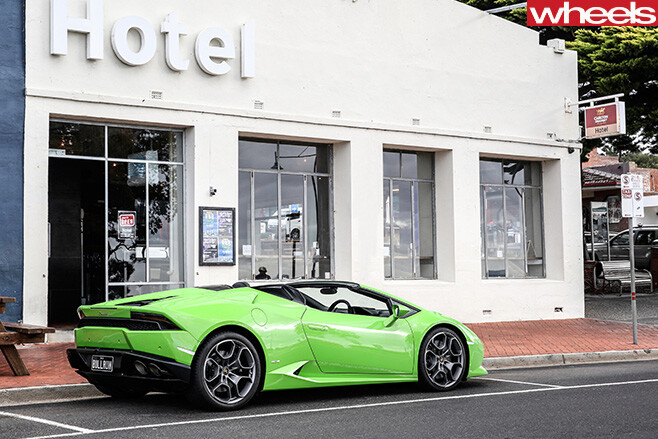 And that’s impressive given the 1524kg Spyder carries an extra 100kg. Consequently, it’s two-tenths slower to 100km/h, but on the move the extra weight doesn’t do the Huracan a disservice in any major way. Perhaps in a back-to-back test the Spyder’s bite might feel less, but in isolation there’s absolutely nothing to complain about.

It has the same instantaneous throttle response from its 449kW mid-mounted V10 that only non-turbocharged engines can deliver. And it’s delivered through the seven-speed dual-clutch auto with a finesse that doesn’t corrupt the car’s balance unless you’re seriously clumsy. All-wheel grip is still prodigious, the steering still feels sharp and involving, turn-in is still ferocious, and corner-exiting acceleration is still neck-snappingly wonderful. Even under brakes – one area we’d expect an extra hundred kegs to make itself felt – the Spyder brooks no argument.

Crucially, the Huracan Spyder has the most important of the Coupe’s character traits: it never feels intimidating. This is a raging bull, sure, but a compliant one nonetheless that encourages you to enjoy its considerable performance chops. One advantage the Spyder has over the coupe is in the visual department. I reckon it’s a stunning piece of automotive work, the kind that drives wealthy owners to build garages in their lounge rooms. The side profile line from the windscreen back through the rear decklid buttress is sublime.

Combine that with the charismatic – and now even more enjoyable – soundtrack and the negligible loss in real-world performance, and it’s easy to see why Lamborghini felt no need to justify the extra cost with additional equipment. Choosing between the Coupe and the Spyder is a decision without a wrong answer.