A bigger engine debuts with bigger wheels and tyres on the Mazda MX-5 roadster. So is the 2.0-litre a sweeter steer than the delectable 1.5?

A bigger engine debuts with bigger wheels and tyres on the Mazda MX-5 roadster. So is the 2.0-litre a better drive than the delectable 1.5?

WHAT IS IT?
The ‘big-block’ ND MX-5, prompted by size-obsessed Americans who thought 1.5 litres wasn’t enough for their favourite roadster. Rumour has it the Yanks threatened a total MX-5 boycott, leaving Japan no choice but to develop a 2.0-litre version courtesy of the base SkyActiv-G donk from the 3, CX-3 and CX-5.

WHY WE’RE TESTING IT?
Supply of the 2.0-litre wasn’t forthcoming when the new MX-5 launched here in early August, hence a delay of almost four months. But if you consider what the 118kW/200Nm 2.0-litre has done for the MX-5’s power-to-weight figure – 114kW per tonne versus 95 for the 1.5-litre version – then it’s a step in the right direction for anyone obsessed with performance. 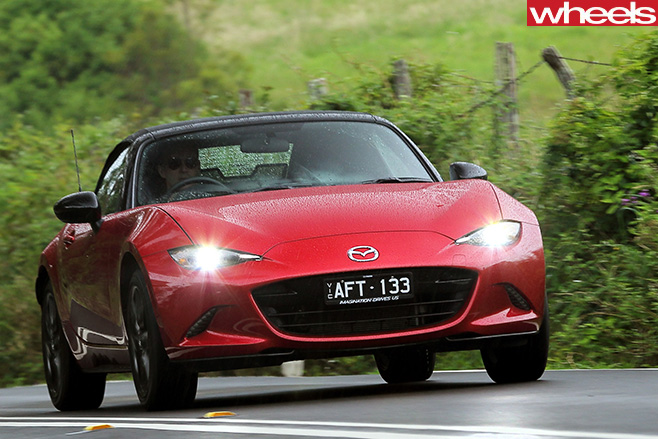 MAIN RIVALS
None, though the Toyota 86/Subaru BRZ coupe twins come close to rivalling the Mazda’s sporting purity, for a similarly sporting entry ticket. Otherwise, you’re left with small hot hatches, or second-hand BMW Z4s and Audi TT Roadsters, none of which are as sweet to drive. 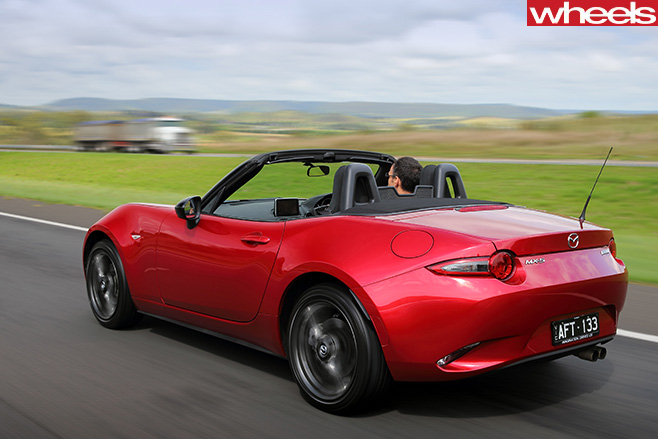 VERDICT
A worthwhile, and affordable, extension of the new MX-5’s inimitable brand power, despite the larger donk trading some of the smaller 1.5’s hard-driven sweetness and rev-ability for greater bottom-end punch and improved tractability. But the beauty of the debate is that, no matter what the engine or transmission, the new MX-5 is a masterly achievement. It’s the very definition of simple pleasures – at realistic speeds – and serves as a long-overdue reminder of what motoring purity is all about.

THE WHEELS REVIEW
THERE IS something about the new MX-5 that inspires genuine emotion, and we’re not talking the adrenal kind. It’s deeper and warmer than that, almost as if you’re discussing which of your own kids you like more. That’s the level of passion surrounding the MX-5 1.5 versus MX-5 2.0 debate. 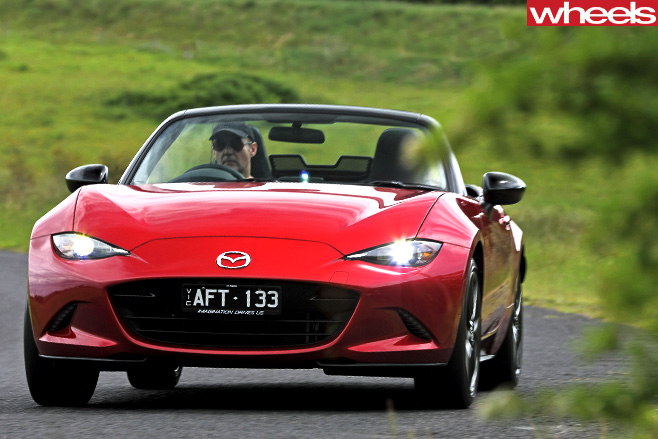 Of course, it’s ultimately semantics. At its core, the ND MX-5 is a masterly achievement. Its exquisitely lithe form is underpinned by a wonderfully balanced, refreshingly supple and deliciously communicative chassis that celebrates the joys of body roll and makes motoring fun at any speed. But just how much speed do you need?

The 2.0-litre MX-5 is rumoured to be a result of the Americans having kicked up a stink about the concept of driving only 1.5 litres. It’s a meatier engine than the 1.5, thanks to a 23 percent power increase and a 33 percent jump in torque – though with almost 34 percent more cubic capacity, we expected more urge. Maybe it’s the abbreviated rev limit – the 2.0-litre hits cut-out right on redline at 6800rpm, whereas the 1.5 will sing past its seven-five red zone to kiss 7750rpm – because we all know revs equal power. Either way, when the 2.0-litre MX-5 reaches its ceiling, there’s a slight feeling of disappointment that it won’t extend just that little bit more. 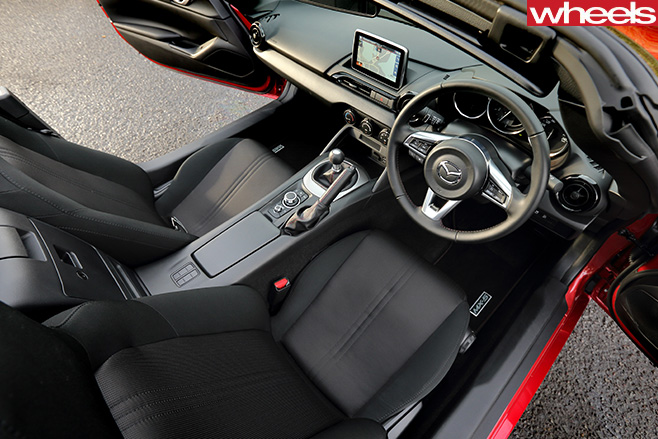 In other driving situations, the 2.0-litre enforces its numerical superiority. The big-block MX is noticeably perkier at lower revs, with a throatier induction note and a more effortless mid-range to back up its more spritely performance. So how much quicker is it?

There isn’t that much in it, to be honest. A second from 0-100km/h (7.3sec for the 2.0-litre six-speed manual versus 8.3sec for the 1.5), and 10km/h extra with your foot flat on a German autobahn (214km/h top speed against 204) is what $2500 extra buys you, though that’s at the extreme end of the scale. In reality, the 2.0-litre feels stronger and doesn’t need to be flogged, whereas the 1.5 rewards commitment, both in terms of attaining revs and maintaining momentum. 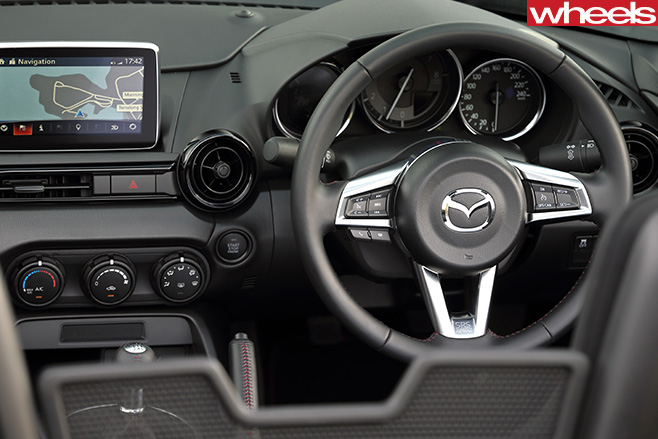 The 2.0-litre’s 205/45R17 tyres – wrapping gunmetal 17s on the base $34,490 2.0 and silver 17s on the $39,550 GT – grip harder and squeal less than the base car’s 195/50R16s, and the 2.0 also gets larger brakes (280mm discs all round, versus 258 front, 255 rear). The GT’s classier cabin, with its body-colour door tops, additional brightwork, leather trim with contrasting stitching and gutsy Bose stereo, will likely attract a majority of punters, even if there’s something refreshing about the base 2.0’s minimalist interior, which gains Mazda’s MZD Connect infotainment system (and LED running lights) over the $32K MX-5 1.5 starter.

But that’s like arguing over what colour serviettes should garnish a Michelin-star dinner. The MX-5’s main meal is so frigging delicious that every variation is something to savour. 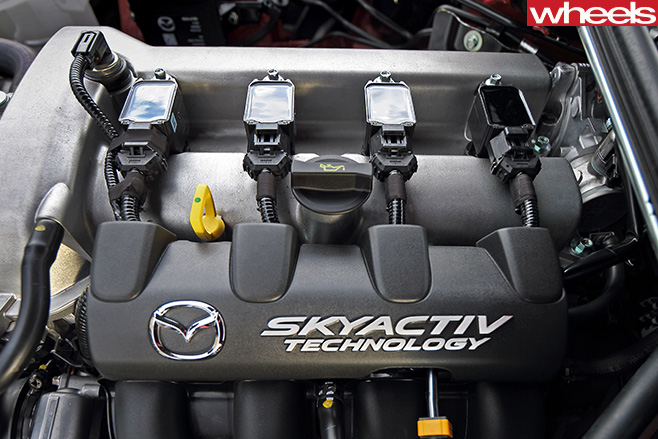 Click here to read the full review on the Mazda MX-5.