A new look and new name, but Mercedes’ hulking seven-seater lags behind the competition

A new look and new name, but Mercedes’ hulking seven-seater lags behind the competition.

WHAT IS IT?
An updated version of Mercedes-Benz’s full-size, seven-seat SUV, previously known as the GL. Now called GLS because it is S-Class size – similarly, the GLE is E-Class size and the GLC is C-Class size – this mild update brings styling tweaks front and rear, minor drivetrain changes and an upgraded interior.

WHY WE’RE DRIVING IT
To see if these updates can transform the GLS into a genuine rival for newer and cheaper seven-seat rivals such as the Audi Q7 and Volvo XC90. 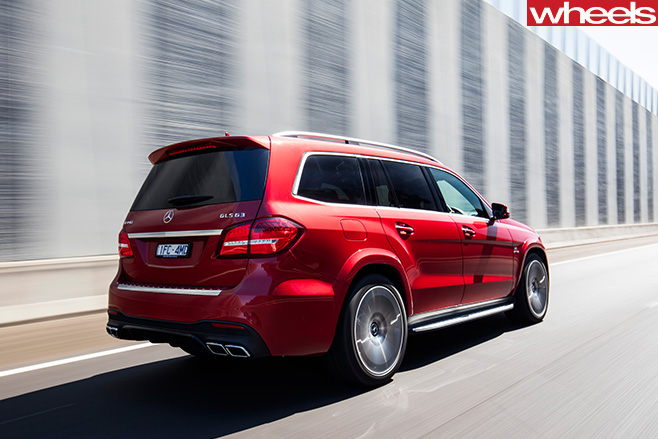 THE WHEELS VERDICT
Big, spacious and luxurious as the new GLS is, its lack of finesse inside and out and high price mean it’s far from our favourite seven-seat SUV.

THE WHEELS REVIEW
DRIVING a GLS delivers a sensation that only very tall and muscular people must experience – you lord over almost everything else. And it’s not a friendly lording, either, like you might receive from a gentle giant, but an aggressive one that shouts, “Get out of my way”.

A big part of this is down to the GLS’s colossal, US-friendly size, backed up by design tweaks that now turn the aggression up to 11. 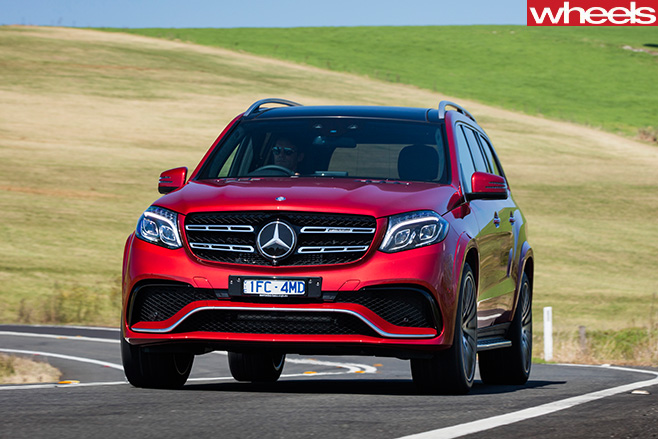 The update also brings a new name. Previously called GL, Merc’s biggest SUV is now known as GLS, reflecting that it’s S-Class size (just as the GLE is E-Class size, the GLC is C-Class size and so on).

There are mechanical changes, too. Non-AMG variants score Merc’s smooth-shifting nine-speed automatic, there are slight power increases for the 500 and 63, and the air suspension has been fettled to improve ride comfort and handling. There’s even the option of an Active Curve System (standard on 350d Sport, 500 and 63) to reduce bodyroll when the road gets twisty. 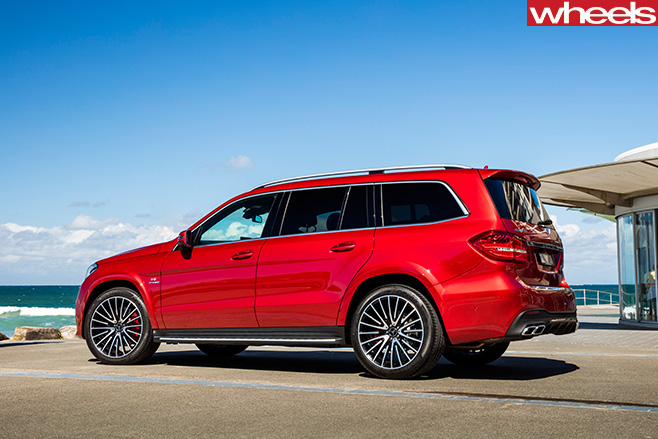 Yet dynamics are not a strength. The steering, which is light for parking and weighs up at speed, shields you from the road surface rather than connecting you to it. And while it doesn’t fall over through the corners, the GLS certainly doesn’t shrink around you and bend the laws of physics like an Audi Q7.

Things improve in models fitted with the active anti-rollbar system, but there’s still no escaping the vehicle’s size and weight. The ride has a nice suppleness but doesn’t deliver the pillowiness you might expect. 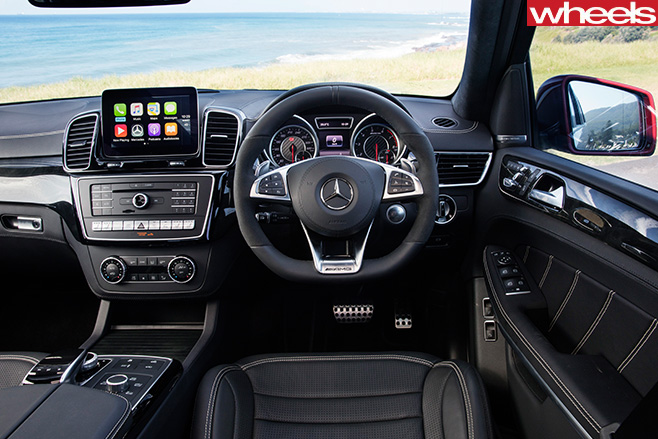 The key positive inside is space. The second row is roomy and comfortable, and the third row is spacious enough for adults to endure. All the seats fold electrically and the GLS’s vast length means there’s space for luggage even with the third row in place.

So the GLS is practical, enormous and comfortable, but can’t match newer – and admittedly slightly smaller - rivals like the Audi Q7 or Volvo XC90 for dynamics, interior opulence or value (thanks to a higher starting price of $116,900). It’s a welcome improvement, but the GLS lacks the luxury and execution we’ve come to expect from the three-pointed star.

Looks without the thirst

If you want the aggressive AMG look without the inevitable AMG thirst, Mercedes now offers a new Sport pack for the entry-level GLS 350d. At $135,900 ($19,000 more than the regular 350d), the 350d Sport adds the active anti-roll bar system, an AMG body kit and leather interior, larger 21-inch wheels, tyre-pressure monitoring and metallic paint. Every GLS can also be optioned with an Off-Road Engineering package for $3600 that adds a low-range gearbox and centre diff lock, increased ground clearance and a 600mm fording depth. 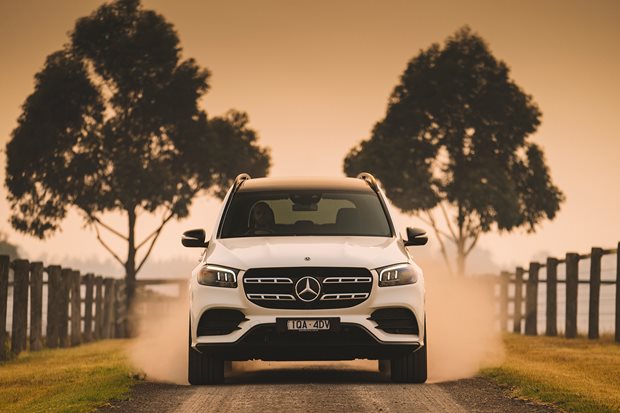 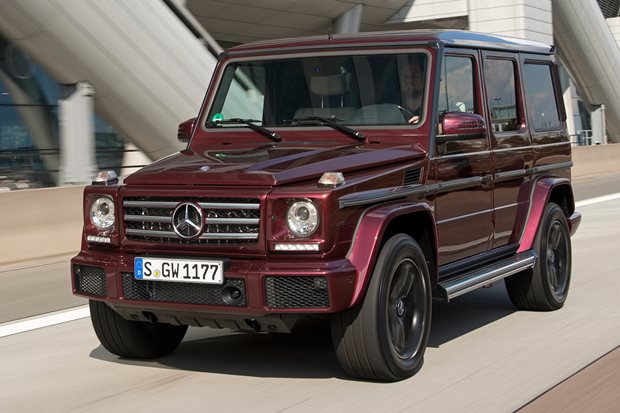 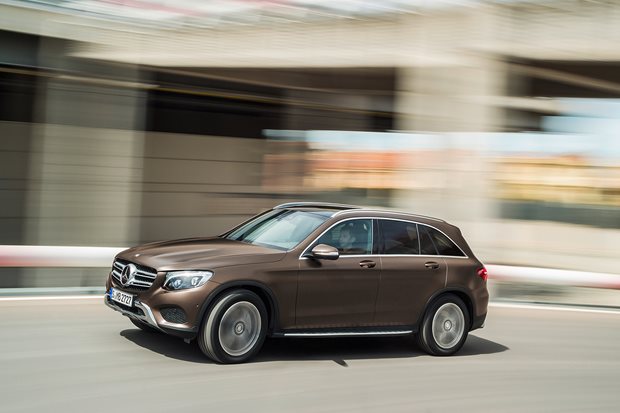 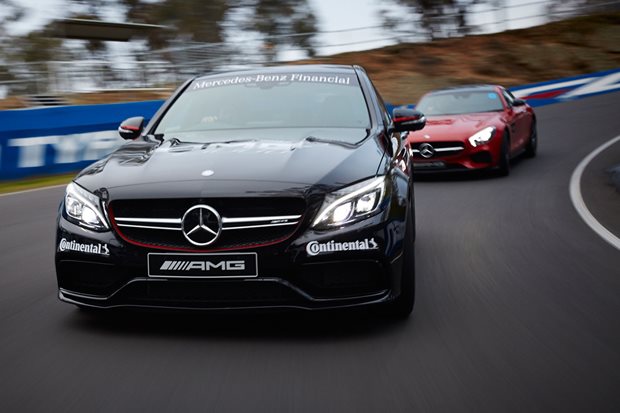 A thumping turbo V8 at the heart of the Mercedes-AMG C63 S aims to make life difficult for the BMW M4, Audi RS4 and Lexus RC F