Mini has ripped $4800 out of the price of its all-new drop-top. Has it also ripped the guts out of the Mini experience?

Mini has ripped $4800 out of the price of its all-new drop-top. Has it also ripped the guts out of the Mini experience?

WHAT IS IT?
This is the third-generation Mini Convertible, codenamed F57 and using the same UKL1 platform as the new hatch and recently released Mini Clubman.

WHY WE’RE DRIVING IT
This is our first drive of the bigger, more mature open-top Mini on Australian soil. In a competitive market that’s seen four-seat convertibles struggle – think Volkswagen Eos and Holden Cascada – the Mini is the class benchmark for style and dynamics. 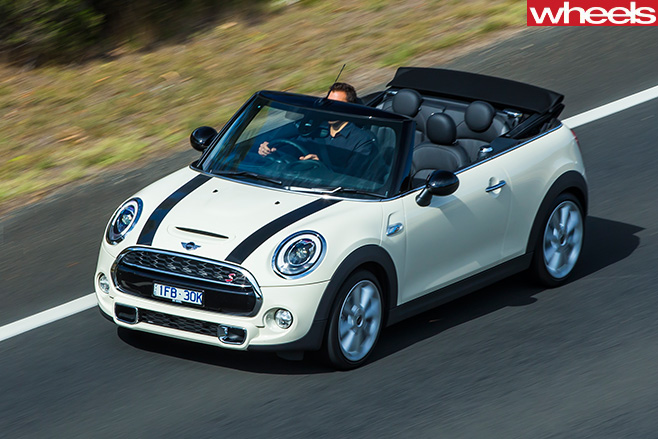 THE WHEELS VERDICT
The Mini Cooper S Convertible is much easier to live with, almost as much fun and even more affordable than its predecessor. The grand scale of the Mini design language hasn’t taken the edge off its looks like some believe the five-door hatch has, and makes this the clear go-to drop top in this segment.

PLUS: Better value for money; timeless style; balance and dynamic poise
MINUS: Poor rear vision with roof down; lack of rear legroom

THE WHEELS REVIEW
IT’S tough selling a convertible at this time of year, but the 2016 Mini Cooper Convertible is right in time for the European summer. Codenamed F57, this all-new generation of convertible is based upon the Mini Cooper that arrived last year, and it’s larger, more powerful, cleaner and with more cabin room than before. It’s also significantly cheaper as BMW becomes wary of rivals as broad as the Audi A3 Cabriolet, through to the Mazda MX-5. 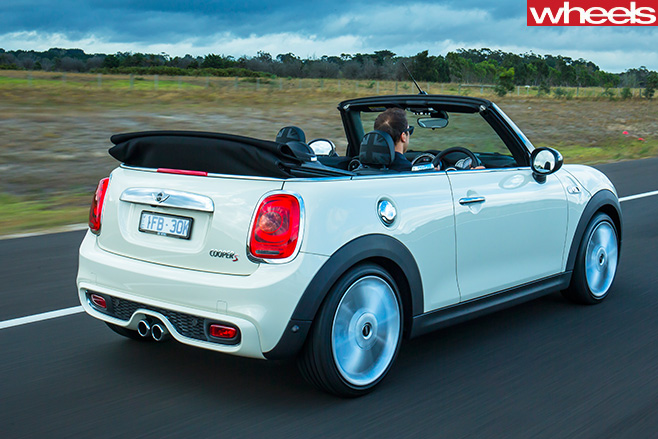 Most of the extra 122mm added to the length of the now 3821mm-long Mini Convertible has been given to the cabin. On the outside, it looks a longer car, but keeps the Mini’s styling hallmarks. Its cheeky front grille and round headlamps, as well as the teardrop taillights and classic alloy wheel designs are all familiar. Choosing the soft-top over the three-door hatch adds $11,250 to the starting price, now $37,900. That’s $4800 less than the kick-off for the previous automatic-equipped model, aided by Mini offering manual and automatic versions for the same price.

For the entry-level Cooper, there’s the sweet 1.5-litre, three-cylinder turbocharged engine that we’ve lauded in the hatch versions. It’s the six-speed manual Cooper S that we’re driving here, and for its $45,400 ask ($5K over the Cooper S three-door) adds inch-bigger 17s (although our test car’s on optional 18s), LED headlights, driving modes (Eco, Mid and Sport) as well as leather sports seats over the Cooper. All Convertibles comes with an electronic diff lock as standard. 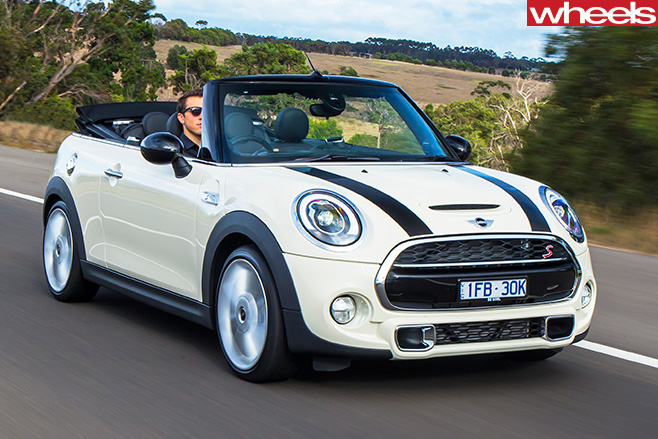 Powered by a 2.0-litre turbocharged four-pot, the Mini Cooper S convertible's engine delivers 141kW and 280Nm – increases of 6kW and 40Nm respectively – to tackle the 45kg weight increase the convertible carries over its predecessor. The claimed 6.2L/100km is a full litre improvement, and the 7.2sec 0-100km/h is modest, but Minis have always been about corners and character rather than sheer numbers.

It remains the case, even for what it’s the biggest Mini Convertible ever. The roominess of the cabin – even with the roof on – is a marked step up from the cramped, corner-closet cabins of the previous R57. What’s more, as part of the look, the Mini’s front windscreen is quite steep compared to most hatchbacks, and strangely the top of the A-pillar is quite a long way from you, and the base of the screen quite forward of your driving position compared to previous Minis. For most people, you could wear a top-hat in the new model, roof on, and easily fit in the front or the back.

Despite the increased room, and Mini’s claims that this is a genuine four-seater, rear legroom is poor if the front row is occupied by six-feet tall adults. 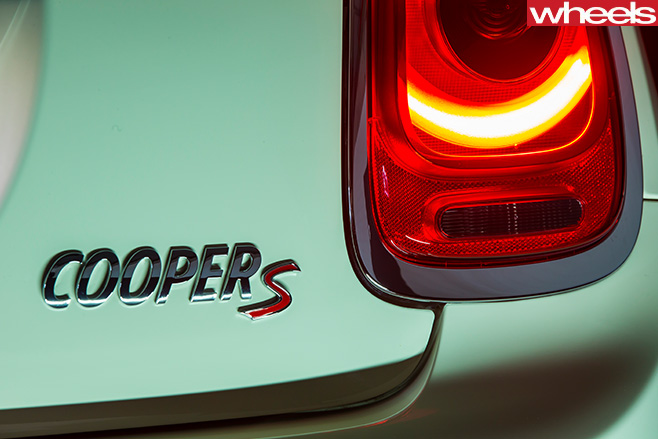 Up front, classic mini design meets larger dimensions aplomb. Forget that this car is significantly larger: there’s the same centre dial dominating proceedings, but the like the rest of the latest-gen Mini, the speedo is now mounted directly in front of you, with the standard 6.5-inch centre screen reserved for the reversing camera, nav and multimedia. The other significant ergonomic change – apart from the acres of front space – is that the aircraft toggle switches for the windows have been ditched for door-mounted buttons.

The soft-top can be opened or closed in a mere 18secs, which is actually 3.0sec slower than the old model needed, and at speeds of up to 30km/h. Cleverly, it also has a sunroof setting, where the flat portion of the roof can be opened, with the rest remaining in place. Gone, too, are the roll-over hoops, and Mini has now integrated these into the body work, but that hasn’t hampered boot space: in fact, it’s 45 litres bigger, now 215 litres. 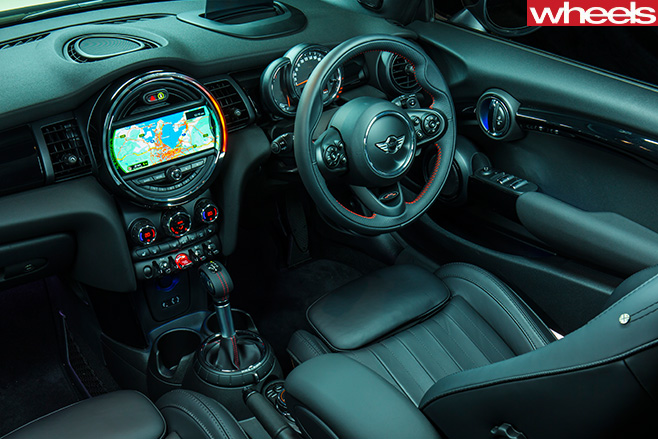 Conversation at 100km/h with the roof down in the Cooper S is not shouty at all. What having the roof open does do, though, is ruin the vision rearward; it blocks the lower half of the centre mirror, leaving you to rely on the side mirrors instead. Roof up, refinement is good, even if you’ll hear the odd tussle of plastic and rubber as the roof and body try to keep the peace between each other.

All of this makes the new Mini that much more liveable, but it’s also an entertaining, involving convertible to drive.

The driving position is great – but that steering wheel seems just a tiny bit too large in diameter for the Mini’s ‘go-kart’ experience in Sport mode. Yet the steering has a greater weight in Sport, but even in the standard drive mode it’s precise, responding to minor inputs, even if you don’t quite know exactly where the front wheels are. Our six-speed manual also has a clicky, precise gear change with pedals and steering inputs that are light and easy and well matched. 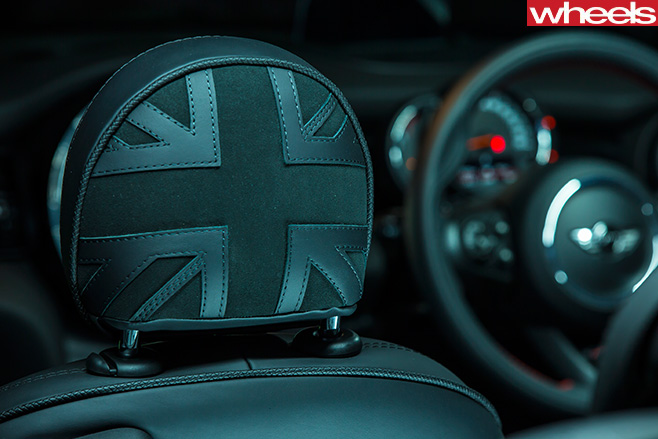 Body roll is well controlled, too, but what’s impressive is the Cooper S’s road-holding on wet roads. Its 18-inch (optional) wheels and Pirelli rubber are rarely relied upon to save the day, such is the poise, balance and control even at serious pace. Turn-in remains sharp, the responsive steering and well-controlled roll converting the power through that clever front diff into faster and faster corner exits. The ESP won’t interrupt your apex negotiations, either, and the easily modulated, firm brake pedals pulls the Mini up very effectively.

Add that the four-pot delivers superb, smooth grunt as opposed to violent ground-bound warfare, and the fluidity and ease at which you can punt the Cooper S Convertible along a country road is only hampered by its ride. The ride, though, is one area that may be cause for a minor complaint. Our test car used run-flats, and here the compliant ride is busier than a fireworks store at Chinese New Year. Yet the Cooper S soft-top is not perturbed, thrown of course or unsettled by even large bumps: it’s just that you’ll feel them.

The increased rigidity and larger footprint have helped the Convertible maintain that cheeky Mini driving flow, all with that pop-and-cackle joy and auto rev-matching as part of the show. It offers better packing, more poke and is just as entertaining for less ask than its predecessor. All it needs is a proper summer…