WHAT IS IT?
A range-topping Renault Clio RS 220 Trophy version of the Renaultsport-developed Clio 200, now sporting 220 metric horsepower (hence the name), firmer suspension, quicker steering, sportier seats and a whiff of extra bling (including optional Frost White matte paint). Just 220 (of course) are coming here, all for $39,990, though only 77 have arrived since December. The rest will be imported over the coming months.

WHY WE’RE TESTING IT?
The current Renaultsport Clio is a more grown-up car than its predecessors, as evidenced by its five-door only, dual-clutch only configuration. And some folks haven’t been too happy about that. This 162kW Trophy version attempts to address some of the regular Clio RS’s concessions to comfort, by sharpening the transmission’s response and tightening up the already capable suspension. More power hasn’t hurt, either.

MAIN RIVALS
Given its similar size, Peugeot’s 208 GTi 30, though the Pug is also a limited-run range-topper with just two still unsold. But there’s an obvious price rival for the hardcore Clio and that’s Volkswagen’s brilliant Golf GTI. It’s less focused and less individual, but more rounded. 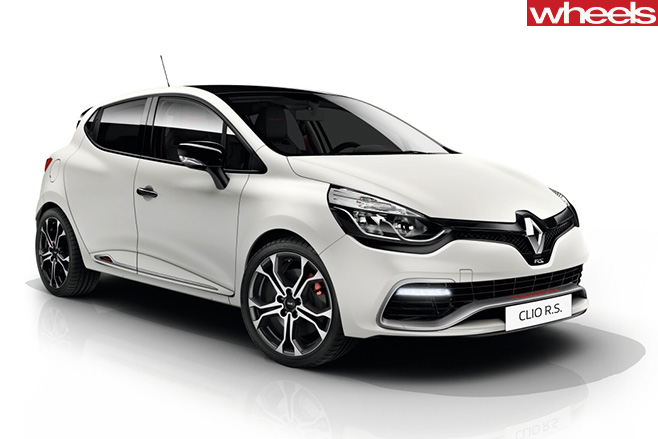 THE WHEELS VERDICT
The modern interpretation of the old Clio 182 Cup – scalpel-sharp handling, firm ride, brilliant body control – except for that bloody dual-clutch gearbox. You can learn to like it, though, and the Clio IV’s sensational styling never fails to delight with its stance and aggression. It’s difficult not to fall for the Trophy’s exceptional balance and adhesion, despite an unyielding low-speed ride.

THE WHEELS REVIEW
Young person’s car. It’s almost like a back-handed statement from the Baby Boomer generation, bringing to mind an over-stickered, heavily spoilered thing they wouldn’t be seen dead in, with a ride as brutal as the hip-hop thumping out of it. But what about a car that makes you feel young? 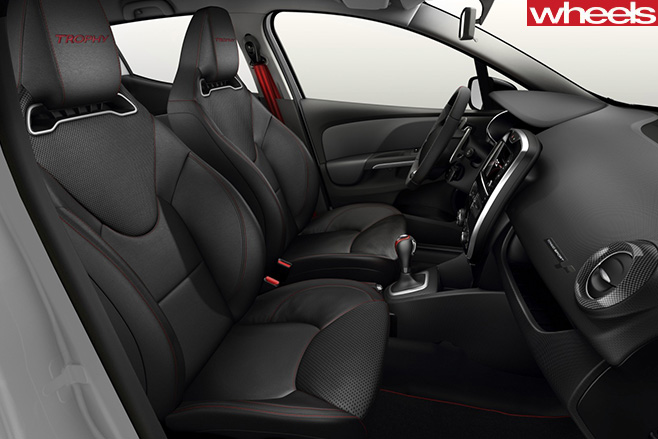 A great hot hatch has that effect. With enough snot to embarrass the big boys and enough handling to dislodge retinas from eyeballs, it’s amazing how a proper on-rails experience can make you feel young and cool again. Just like being asked for ID...

While Renault’s current Clio hottie hasn’t quite achieved the cult following its manual-only predecessors still enjoy, you’d have to be desperately morose not to have a good time in one. Nevertheless, Renaultsport has a solution – the harder, faster, stronger, pricier, $39,990 Clio RS 220 Trophy.

Its update list reads like a Who’s Who of go-fast enhancements. The suspension cops stiffer dampers with hydraulic bump stops, and the ride height drops a little (20mm up front, 10mm rear) to make the Clio’s stance even tougher. A faster steering rack (with a drop in ratio from 14.5:1 to 13.2:1) reduces the turns lock-to-lock from 2.67 to 2.41, while the Clio Cup’s 18-inch Radicale alloys score a diamond-cut finish for the Trophy and Michelin Pilot Super Sport rubber (instead of Dunlop Sport Maxx).

Making the most of the Trophy’s match-fit chassis is a considerably enhanced drivetrain. Fresh engine mapping, a larger turbo, a redesigned intake system to reduce back pressure, and a revised exhaust system with Euro-6 catalytic converter nudges power to 162kW (up 15) and torque to 260Nm (up 20). A ‘torque boost’ function in fourth and fifth gears unleashes an additional 20Nm during full-throttle bursts, and the EDC dual-clutch ’box has been injected with adrenalin for 30-percent faster shifts. 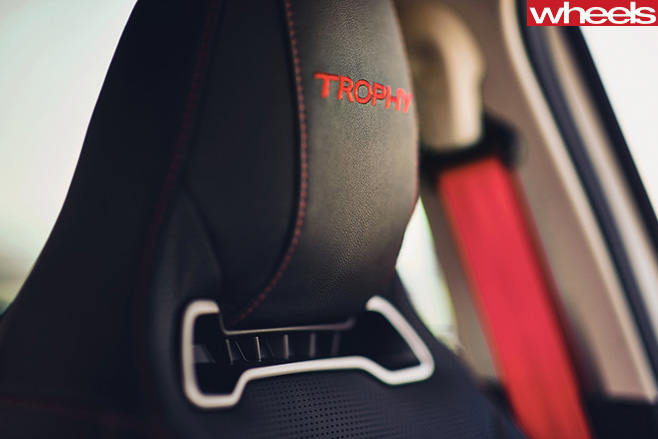 The net worth is a much firmer car, with an almost unyielding ride at low speeds, but in fine Renaultsport tradition, it never crashes through.

Hasten your pace and the Trophy comes together beautifully, provided you’ve hit the Renaultsport button between its new front seats. Only then do you get the most consistent steering weighting and some exhaust bark to support the Trophy’s superb handling poise and fabulous grip.

When it’s on song, a hearty thrash in the Trophy is like being 21 again, drenched in sweat, fist-pumping the air as your favourite band lights up the stage.

But when it isn’t, the elephant in the room becomes painfully obvious. No manual ’box. Improved as the EDC is, a ripsnorter like the Clio 220 Trophy deserves a stick. 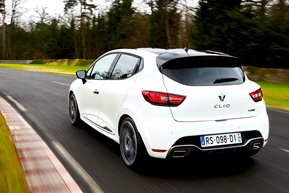