THE Volkswagen Amarok will soon add a 3.0-litre turbo diesel V6 variant to sell alongside its 2.0-litre twin-turbo four-pot ones. To celebrate it will launch a limited-edition dual-cab Amarok called the Aventura, which is shaping up to become the most expensive tradie’s workhorse ever launched on the Australian market.

WHAT IS IT?
The Aventura is a bespoke-badged, limited-run celebration of the Amarok engine that many were crying out for – a diesel V6. It will temporarily sit above a V6-engined Highline model, a four-cylinder Comfortline model, and the fleet-friendly four-cylinder Trendline. Until Mercedes-Benz stumps up its Nissan Navara-based GLT in 2018, the Amarok looks like standing alone as the only bent-six light truck on the Australian market. It should have plenty of showroom appeal, as the Highline currently accounts for two of every five Amarok sales here.

WHY WE'RE TESTING IT
Because of two numbers: 165kW and 550Nm. The new diesel V6 has an extra 33kW and a stonking 130Nm edge over the Amarok’s current high-performance four-pot mill. 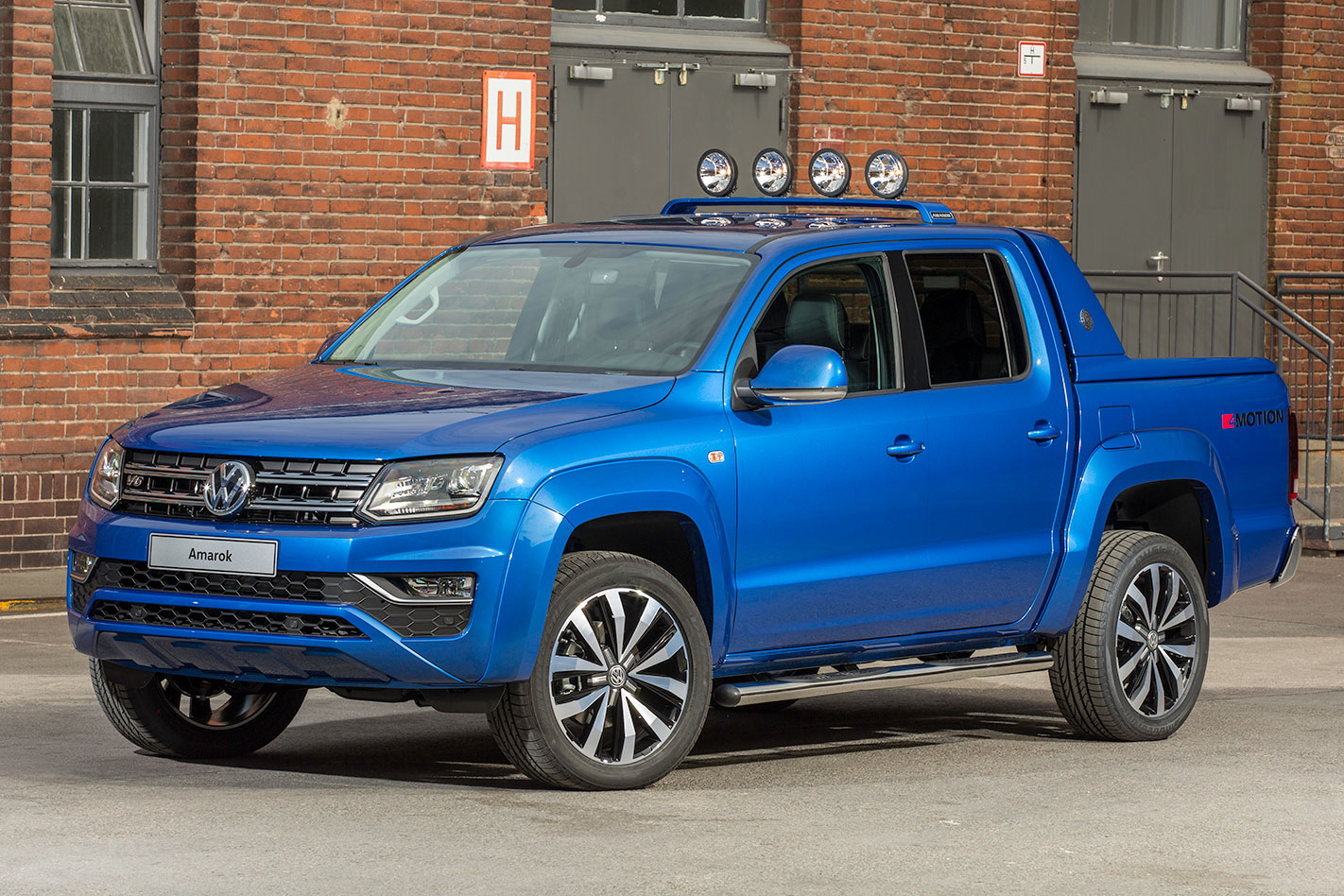 THE WHEELS VERDICT
More power, and in particular a better spread of high-end torque, have always been on the wanted list for Volkswagen’s Amarok. The V6-engined version, then, is late to the party but worth the wait. 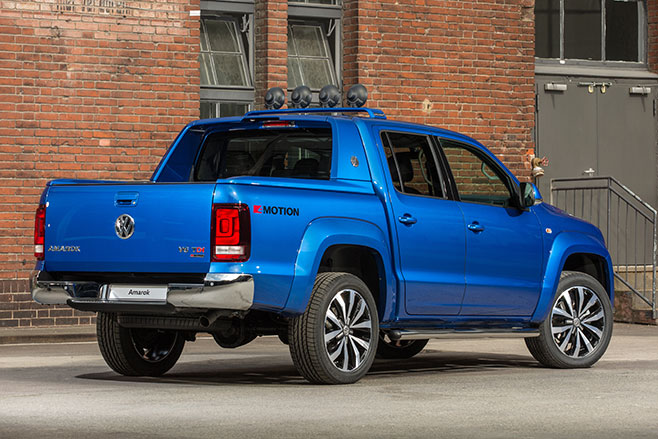 THE WHEELS REVIEW
ABOUT four years ago Volkswagen had a very different set of problems to those troubling it today. Deadlines for tougher Euro 6 diesel emissions standards due in late 2016 were closing fast, and it had vehicles that needed to comply with the new regulations.

One, the twin-turbo 2.0-litre four-cylinder engine used in the Amarok, was particularly troublesome for the carmaker’s commercial vehicle arm. The cost of bringing the engine up to Euro 6 standards was ruled prohibitive, so it had to find something in the wider Volkswagen Group that was already Euro 6 friendly.

VW’s solution was a versatile single turbo 3.0-litre diesel V6 launched in 2014 as a next-generation passenger car powertrain. The engine had already been used in products as diverse as Audi’s A4 and Q7, and even the performance-honed 193kW/580Nm Porsche Cayenne S Diesel.

For Amarok, the diesel is tuned to produce 165kW and 550Nm, enough to make it the most powerful trade ute on sale in Australia. As a bonus, the engine will temporarily tip into overboost, providing an extra 50Nm for overtaking. 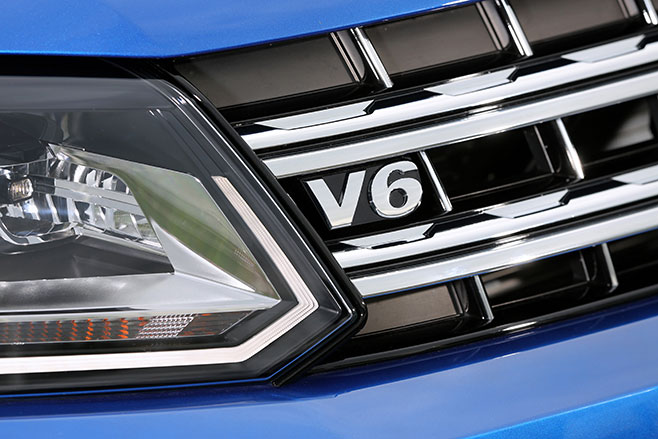 To mark the V6’s arrival, and as part of a mid-life spritz that marries the Amarok’s looks into the rest of VW’s commercial vehicle range and makes the interior even more car-like, Volkswagen will build a launch edition of the ute called the Aventura. It gains larger 20-inch alloys, a tub-mounted sports bar and the choice of two matte colours: blue and grey. In Australia, it will temporarily sit at the top of the Amarok tree above a Highlander-badged V6, as well as two base 2.0-litre versions. However, the addition of V6 power won’t come cheaply: When Aventura lands here late this year, it will become Australia’s most expensive trade ute.

At the moment, there are no suspension changes for the V6 compared with the four-cylinder one, despite the extra 80kg the bigger engine adds over the front wheels. That said, the extra poke does bring bigger front brakes to haul it all in, as well as disks replacing the rear drums that will remain on four-cylinder variants.

Aventura gains what will arguably be the most comfortable front seats in the business. Lifted from the Passat, they include 14-way electric adjustment, and snug bolstering that goes a long way to counter the body roll the tall, heavy ute can’t hide while cornering.

You’ll still need a key to crank the Amarok’s new V6, but the needles in the analogue instrument cluster now give a Golf GTI-like playful flick across the dials on start-up. 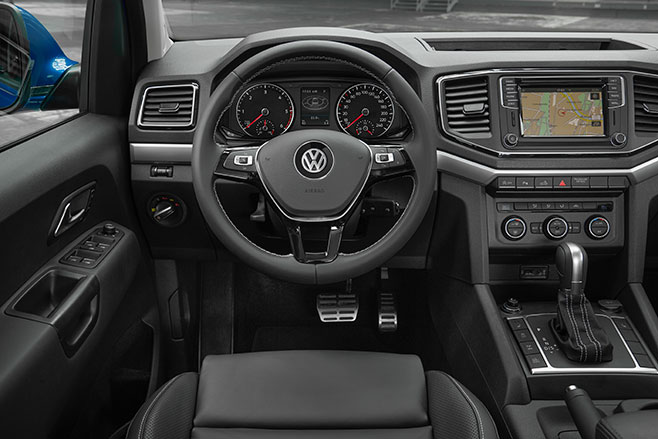 The V6 engine is impressive. Strong from low revs and willing, it works with the eight-speed automatic transmission to deliver a decent rush of acceleration – and if you’re rolling, once the Aventura sorts out which gear it wants to select. A better way is to use the almost comically small steering wheel-mounted paddle shifters to manually pick the appropriate gear. Jump on the brakes and the Aventura washes speed quickly, playfully blipping the throttle to match revs on lower-gear downshifts.

Ride, too, is well sorted on the standard 20-inch alloys clad in Bridgestone Dueler H/P Sport rubber and despite the hefty 2.3-tonne kerb weight. However, this was on smooth German roads as part of the Aventura’s international drive program, so we’ll make a more comprehensive assessment when the ute arrives here. There’s noticeable body roll in faster cornering, but the speed-sensitive Servotronic steering – a first for the Amarok – is well weighted provides plenty of car-like feedback. 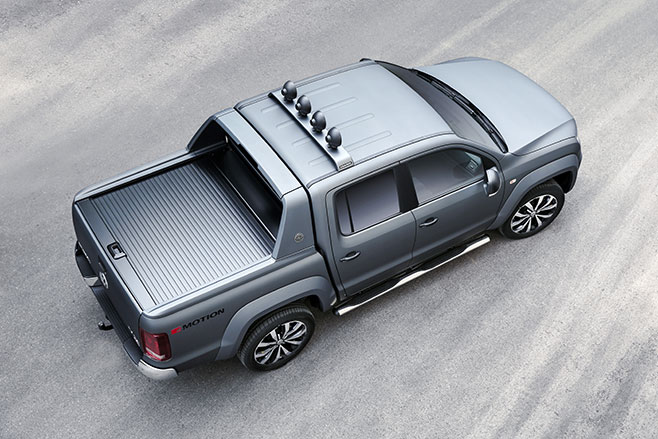 And it wouldn’t be Germany without testing the Aventura’s claimed 195km/h top speed – officially only 26km/h slower than the Porsche Cayenne Diesel. The V6 hit it easily with a sense it could go even harder if asked.

As our recent ute mega-test shows, the Volkswagen Amarok is already a Wheels favourite, and the V6-engined Aventura – feeling more like a sports ute and less like a building site workhorse – does little to change that. 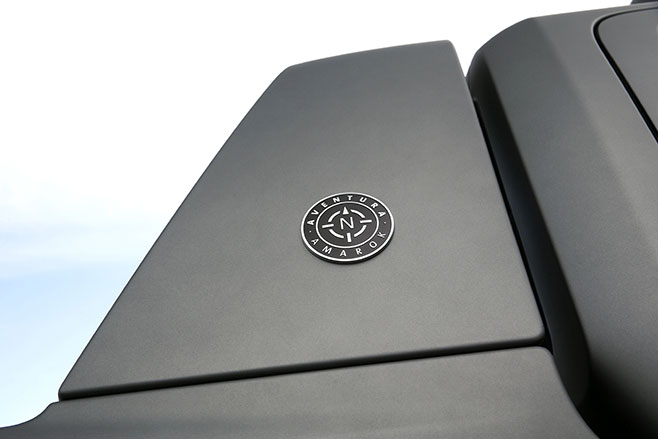