VOLVO is back in the big luxury-car business with the S90 (sedan) and V90 (wagon), targeting the BMW 5 Series set with progressive safety, engineering, driveability, and design. Both are a massive leap forward from the V70 and S80 they replace.

Volvo is back in the big luxury-car business with the S90 (sedan) and V90 (wagon), targeting the BMW 5 Series set with progressive safety, engineering, driveability, and design. Both are a massive leap forward from the V70 and S80 they replace.

WHAT IS IT?
Volvo understands that to achieve real respectability against the luxury German marques, it must design and engineer a car worthy of taking on the tremendously capable BMW 5 Series and Mercedes-Benz E-Class. That’s what the S90/V90 are aiming to do, and with an intriguing Swedish twist.

WHY WE'RE TESTING IT
As Sweden’s remaining mainstream carmaker, Volvo reckons it can carve a slice of the larger premium sedan/wagon cake with a distinctly Scandinavian take on styling, performance, efficiency, dynamics, and safety. What’s different from before is that the all-new S90/V90 also strive to meet, or exceed, the segment highpoints. So have the Swedes finally broken into the premium premier league? 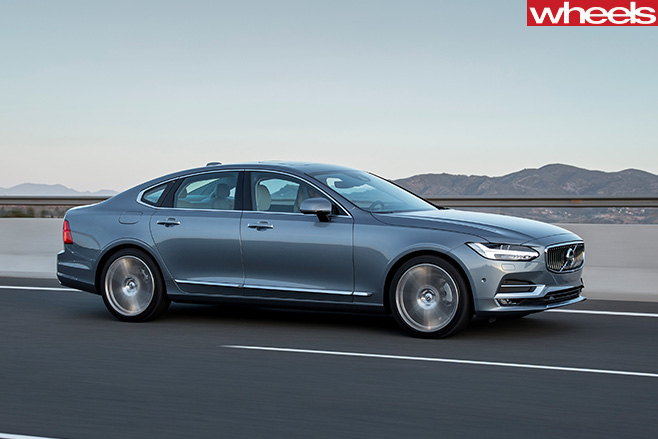 THE WHEELS VERDICT
Since separating from previous custodians Ford, Volvo has focused all of its resources to delivering Scandinavian flavoured alternatives to the luxury-brand establishment, beginning with the Volvo XC90 SUV, and now with the S90/V90 large passenger cars. Interestingly, the Swedes have deemed the dynamic and refinement standards to be higher in the BMW 5 Series class, so have redoubled efforts with their sedan and wagon; particularly in driver appeal, safety, and packaging. The result is, pretty much beyond doubt, that the S90/V90 are the best vehicles to wear the shield badge in modern times, and ones that ought to really shake up the segment. They’re really that good…

THE WHEELS REVIEW
RECENTLY, a car-company boss confirmed what many have long suspected: that respectability only arrives when “you get your 5 Series rival right”. 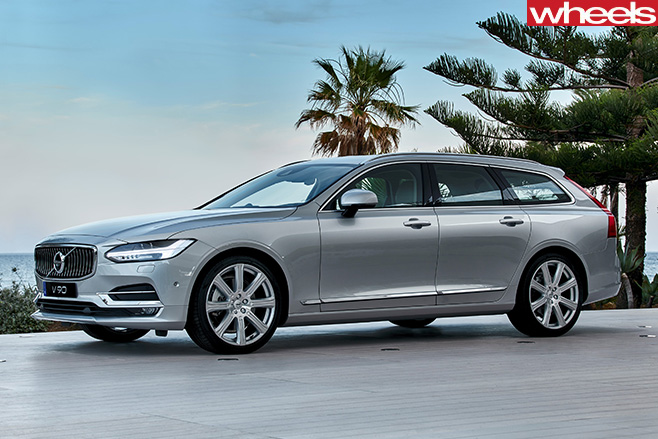 That’s why Jaguar became relevant again only after the XF surfaced in 2007, Hyundai chose the G80 to go global with Genesis, and now social-climbing Volvo is targeting the BMW with the new S90 and its V90 wagon sibling due mid next year. Like making it in New York, succeeding in the large luxury class is the Swedish brand’s ticket to premium legitimacy.

Sharing about 40 percent of parts with the latest XC90 launched last year, the S90 actually drove the initial development of the all-new SPA Scalable Platform Architecture when work commenced during the dying days of Ford control in 2008. “Sedan buyers are very fussy, so we had to get its proportions exactly right first,” according to the ‘Cluster 90’ senior director, Kent Falck.

Even Volvo admits that outside of Sweden nobody was exactly aching for S80 and V70 replacements, so the S/V90 couldn’t just be BMW clones, but something different and compelling. Benchmarked against “basically the Germans”, they embrace Volvo’s controversial 2.0-litre four-cylinder powertrain strategy, with a circa-300kW/640Nm petrol-electric plug-in hybrid arriving later in 2017. 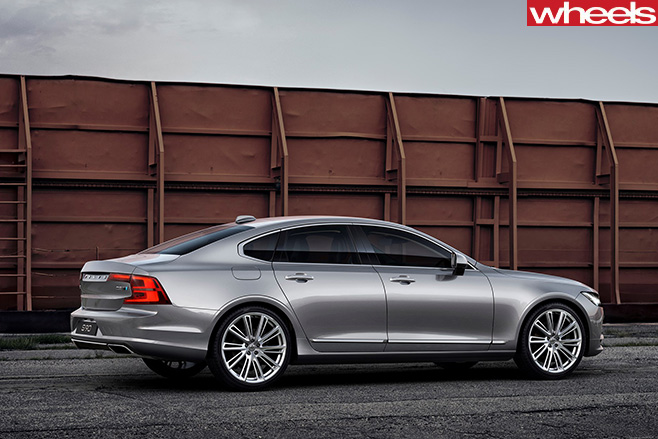 Only the higher-end T6 petrol (235kW/400Nm) and D5 diesel (173kW/480Nm) were available for trial at the S/V90’s international launch in Spain, powering all four wheels via a conventional eight-speed torque-converter auto. The latter is also found in the 187kW/350Nm T5 petrol and 140kW/400Nm D4 diesel front-drivers.

Almost in defiance of its 1969cc capacity, the T6 AWD is certainly no slouch, leaping forward into action and maintaining a cracking pace as long as you don’t spare the accelerator pedal. Maximum power tops out at a fairly highly-strung 5700rpm, but you rarely hear the four-pot turbo shriek otherwise, since there’s a sizeable wad of torque and smartly spaced gear ratios to keep things humming along sweetly. Conversely, the auto’s occasional jerky downshift, propensity to not upshift in Dynamic, and lack of wheel paddles sully an otherwise slick mechanical ensemble.

Yet it is the brawny D5 AWD that really – and literally – blows expectations clean away, thanks to the patented PowerPulse tech. Using compressed air to multiply turbine speeds, it slashes turbo lag for a strong and stirring stream of performance stamina, and without the off-boost blues to impede progress. 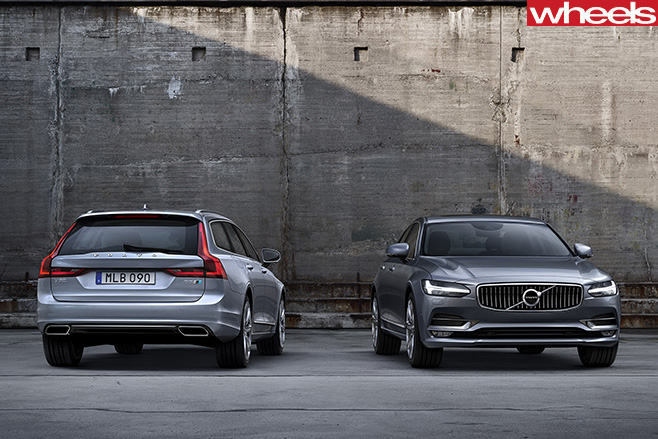 But the biggest shock is how the S90 T6 and V90 D5 seem to have discovered levels of steering feel and feedback foreign to any previous big Volvo.

As with the XC90, the ‘Drive Select’ offers overly light and softly suspended ‘Eco’ and ‘Comfort’, but in the pitch-perfect ‘Dynamic’ setting, the whole car gels terrifically. Thank the optional 20-inch rubber, lower centre of gravity, or reduced mass, because poise and response are the happy by-products. Turn-in is instant and linear, the handling receptive, and the chassis planted. Even the wagon shrinks around you blasting along a tight and twisting hairpin. Extra-cost rear air suspension also helps impart a supple and isolated ride, further boosting our admiration.

Neither model is actually sporty, but there is a newfound athleticism that keen drivers can work with. Volvo calls it “Relaxed Confidence”. Let’s hope such comfort and control translates on Aussie roads.

The Inscription series for both the D5 and T6, equals interior sumptuousness – meaning this S/V90’s hushed cabin is more than a match for most rivals. Similar, but better resolved than the XC90’s lush leather and walnut, brushed aluminium and chrome meld seamlessly with the tech-heavy (and initially intimidating until familiarisation sets in) multi-screen displays, gorgeous instruments, truly lavish seating – front and rear – and detailing exquisite enough to impress Audi. A big audio volume knob is such a luxury nowadays. The thing reeks of opulence. At nearly five metres long, the same number of six-footers will also fit, despite the sedan’s sloping roofline. 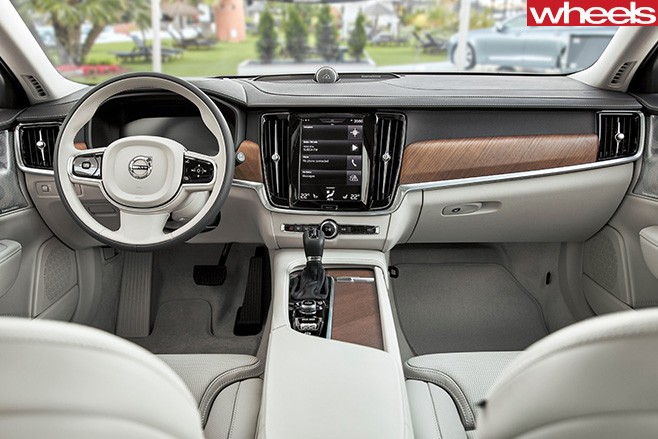 Expensive for a Ford-era Volvo perhaps, but the Geely-funded S/V90 twins might have just made it as blinding BMW 5 Series botherers. Maybe not top of the heap but certainly Vi-kings of the hill.