Another remix of VW Group’s fine MQB component set, the Audi Q2 stands out from the premium small SUV crowd for the right reasons. It makes the Audi Q3 look dumpy, dull and done-for…

WHAT IS IT?
A premium small SUV that introduces Audi’s sharp new Polygonal exterior design language. Decently packaged interior lives up to the brand’s reputation for cabin quality.

WHY WE’RE TESTING IT
The international launch in Switzerland provided our first chance to sample the Q2; more than six months ahead of its scheduled first-quarter arrival in Australia.

MAIN RIVALS
Mercedes-Benz GLA and Mini Countryman for sure; possibly even top-end variants of the good-looking Mazda CX-3. THE WHEELS VERDICT
The new Audi Q2 is a very likeable premium small SUV. It may just turn out to be the best in class. Exterior design has real personality, high-quality interior is decently packaged, drivetrains are effective and efficient, and its handling – especially its steering – makes this Audi a more involving drive than the small SUV average.

THE WHEELS REVIEW
Who’s going to want a Q3 after the Q2 reaches Australia in Q1 next year? The angles-with-attitude exterior of Audi’s new small SUV looks great. The interior, chassis and drivetrains aren’t bad, either. And Audi is aiming for a Q2 range entry point price thousands below the $42,900 tag worn by the least expensive Q3. While it sells well, the dumpy and frumpy Q3 is the least attractive model in Audi’s current line-up. The pert and poised Q2, on the other hand, is a charmer.

The name implies a full size step down from Audi Q3, and the Q2 is smaller. It’s 200mm shorter (thanks mainly to small overhangs), lower and slightly narrower. But the newcomer is another mash-up of VW Group’s MQB component set, and the 2600mm wheelbase it happens to share with the three-door A3 Australia doesn’t see is a scant 5mm shorter than the Q3’s.

That wheelbase is the foundation for an interior package that’s reasonably spacious. There’s sufficient knee, head and toe room for tall adults in the rear seat. The Q2’s long rear doors also improve rear seat access ease compared to the Q3. Where the Q2’s more compact dimensions are most evident is the 405-litre cargo compartment, which is more than 50 litres smaller than the Q3’s. The Q2’s interior is a lively, high-quality and well-equipped environment. The Design and Sport trim lines offer a choice of different (and vibrant) colours for the inlay running the width of the instrument panel. Fit and materials are Audi excellent, and the standard kit-out lacks for little; autonomous emergency braking, a rear-view camera combined with all-round parking sensors, and dual-zone climate are all there.

But the list of infotainment and connectivity features is even longer: MMI Navigation with 7-inch hi-res display; Audi Connect; smartphone interface, and Bluetooth plus voice control. Options – including MMI Navigation Plus with a larger screen; Audi’s brilliant Virtual Cockpit instrument screen; a head-up display; adaptive cruise, and a bunch of other driver-aid systems – make it possible to go even further. Spend enough, and it will be possible to specify a Q2 to a tech-level to almost rival an Audi Q7. 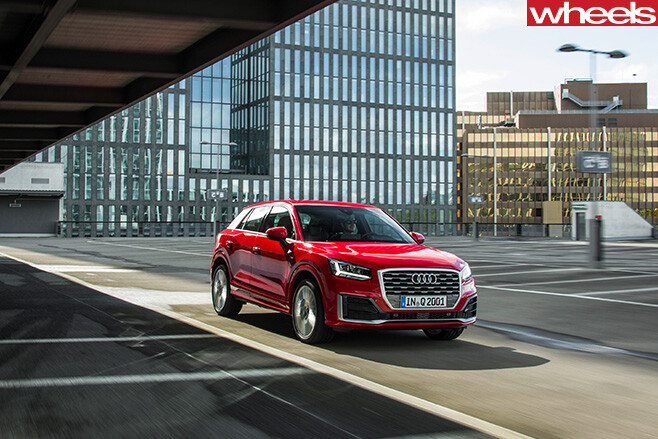 Audi Australia aims to price the Q2 from a little under $40,000. The range will open with the front-drive 1.4 TFSI in Design trim line. The 2.0 TDI quattro in Sport trim will go on sale at the same time in the first quarter of 2017. These will be followed, soon after, by a 2.0 TFSI quattro, again in Sport form. Wheels tried the first two at the international intro in Switzerland.

The 2.0 TDI quattro has a 110kW turbo diesel four, teamed with a new seven-speed S-tronic double-wet-clutch auto. No complaints about performance, shifting or traction, but the engine should be quieter and smoother. The very direct (just 2.0 turns lock-to-lock) variable-ratio electric-assist steering rack used in all Q2 variants makes the Audi feel quite agile. But you can sense the effect of the 35mm extra ground clearance compared with an A3 when cornering, the feeling amplified by a driver’s hip-point that’s 85mm higher.

Naturally enough, the cheaper 1.4 TFSI is expected to be the best-selling Q2. Although it has a rear torsion beam instead of the multilink suspension of the quattro-equipped Q2s, it’s a sweeter drive overall. The 110kW petrol-burning turbo four, which is combined with a seven-speed double-dry-clutch S-tronic, is a more refined engine, and the simple rear suspension has little negative effect on handling. 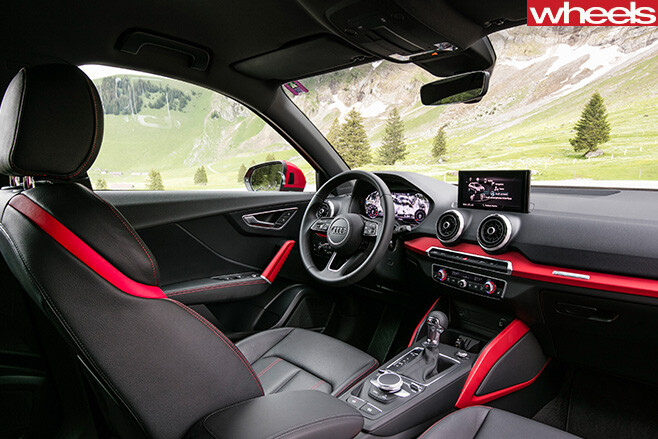 Ride could be another matter, but the super smooth roads of Switzerland made it impossible to tell. Given the surfaces, road noise levels seemed a little high, however. What was missed in the 1.4 TFSI was quattro-style traction. It sometimes scrabbled for traction out of tight Alpine hairpins.

But the mere fact that the Q2 encouraged a little cornering enthusiasm was further confirmation that it’s a more characterful Audi SUV than the yawn-worthy Q3.