After a long delay the Audi Q7 e-tron is finally ready to come to Australia.

Audi fits its powerful and torquey V6 diesel with a battery pack, electric motor and plug-in charger to provide more power and performance for the Q7, and improved fuel efficiency. It comes at a price though, costing $35,000 more than the diesel-engined V6 variant at $139,900. 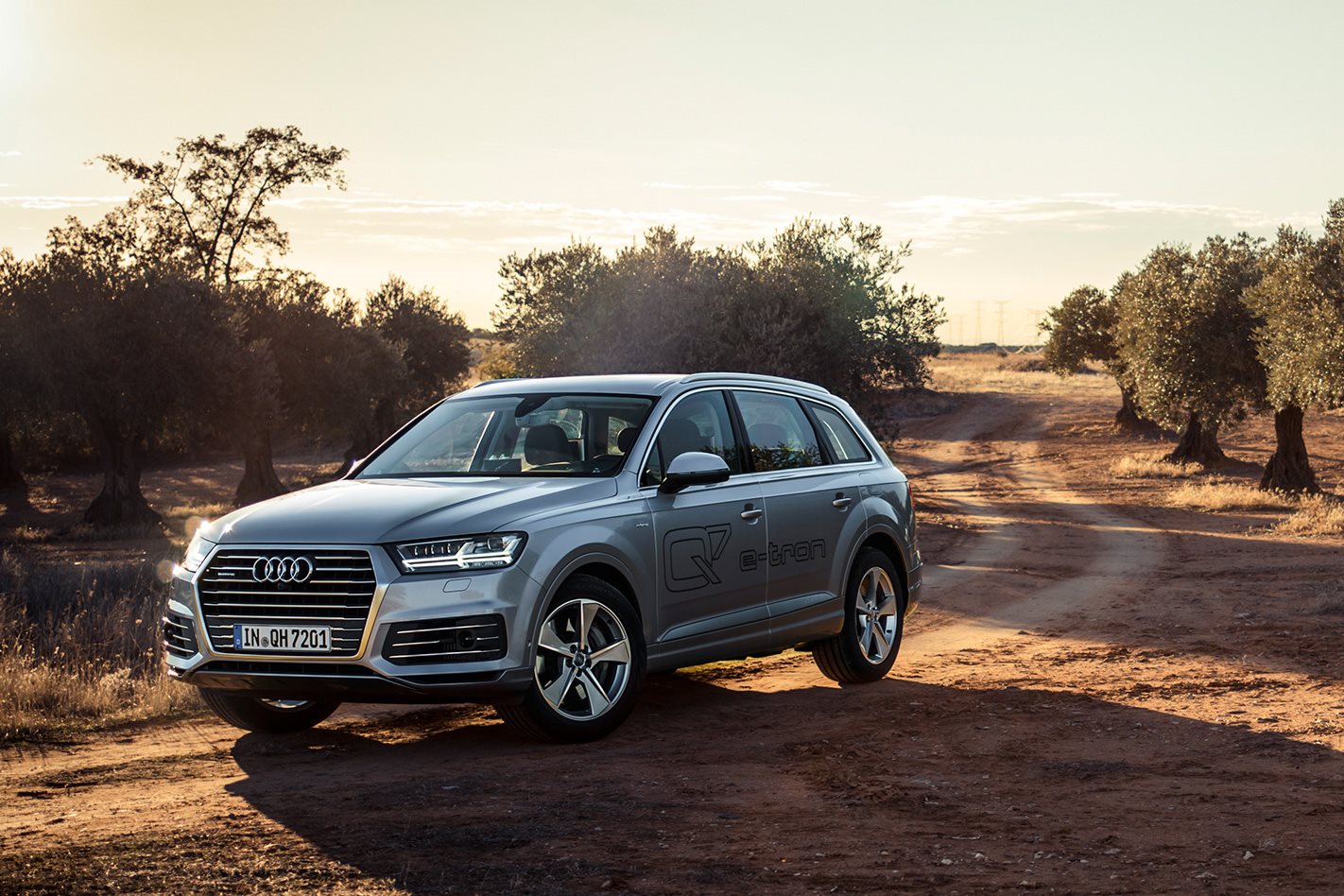 We first met the Q7 e-tron back in late 2015 when the model was launched globally but the variant missed its original Australian arrival date of 2016 by a long shot.

Ahead of the touch-down date in January and in light of confirmed local pricing, we are re-familiarising ourselves with the Q7 e-tron to see if it still makes sense in Australia’s unique market.

With a serious powertrain that is only a few lengths behind the mighty Audi SQ7 in its natural autobahn habitat, the Q7 e-tron has impressive performance previously unheard of in the large SUV arena. Add in fuel economy that also defies the Q7’s size and weight and you are looking at a compelling package of punch, practicality and efficiency. But when it finally rolls out after a protracted wait, only the Australian car-buying public will be able to answer whether the time is right for premium plug-in SUVs, good or bad. 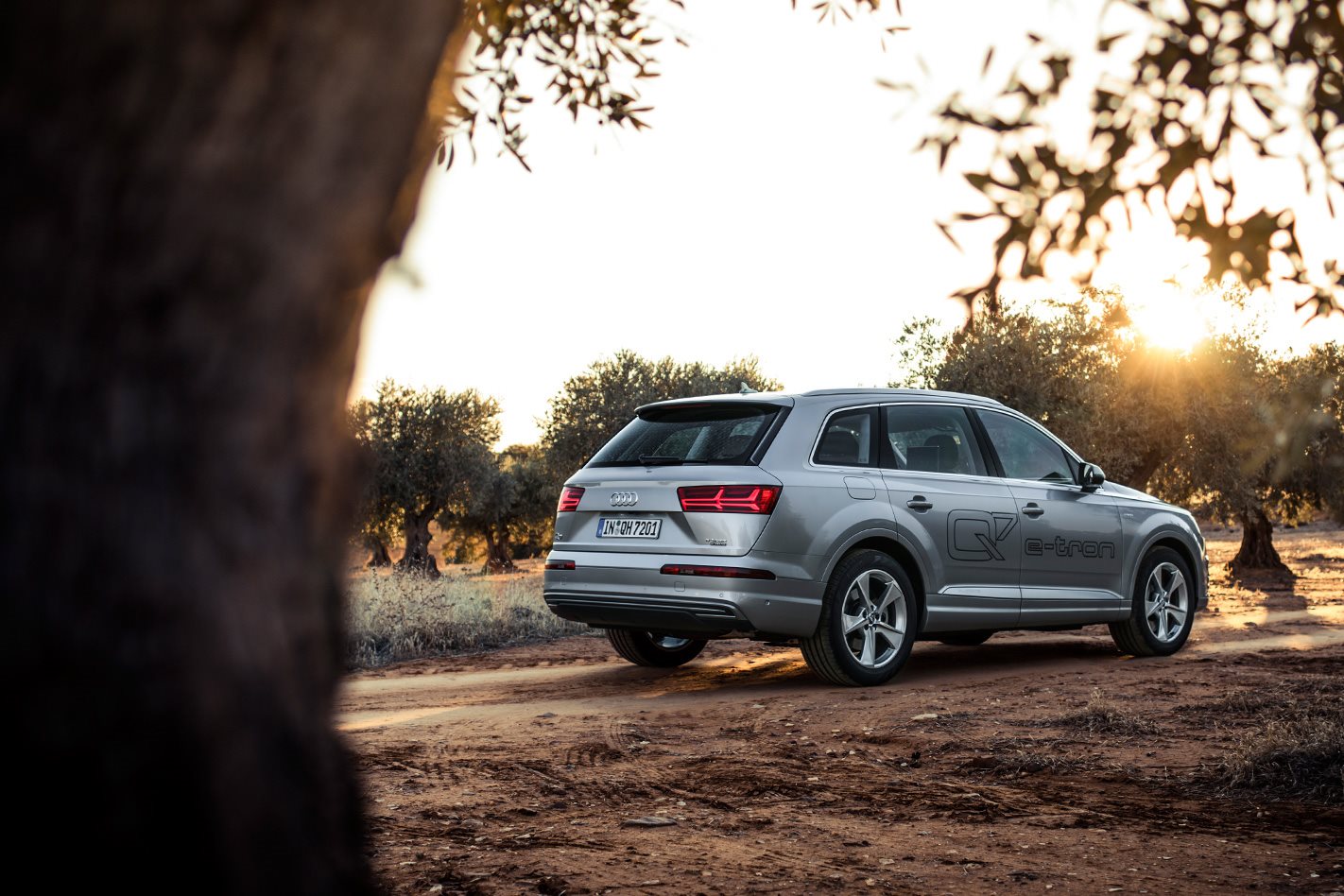 AUDI’S existing Q7 range is not exactly the under-achiever of the four rings fold. Opt for the most powerful six-cylinder and you’ll get a car that can ferry seven people in comfort, crack 0-100km/h in the same time as a mid-1980s Ferrari but uses fewer than six litres of diesel per 100km. Step up to the SQ7 and you have the punch to worry a mid-1990s Prancing Horse while still only consuming 7.2L/100km. But the newest addition to the range sets new power and efficiency standards.

With a full charge, the e-tron’s 17.3kWh lithium ion battery has enough spark to propel the Q7 for up to 56km, and at speeds up to 135km/h, without firing a single cylinder, but it’s far cleverer than that. After plotting a course in the MMI navigation, Audi’s predictive efficiency assistant works out the most efficient way to use the charge in the battery at that point and the result is amazingly effective. If the route will encounter traffic congestion or urban areas, the Q7 saves battery power for those sections of the journey where electric drive makes most sense. 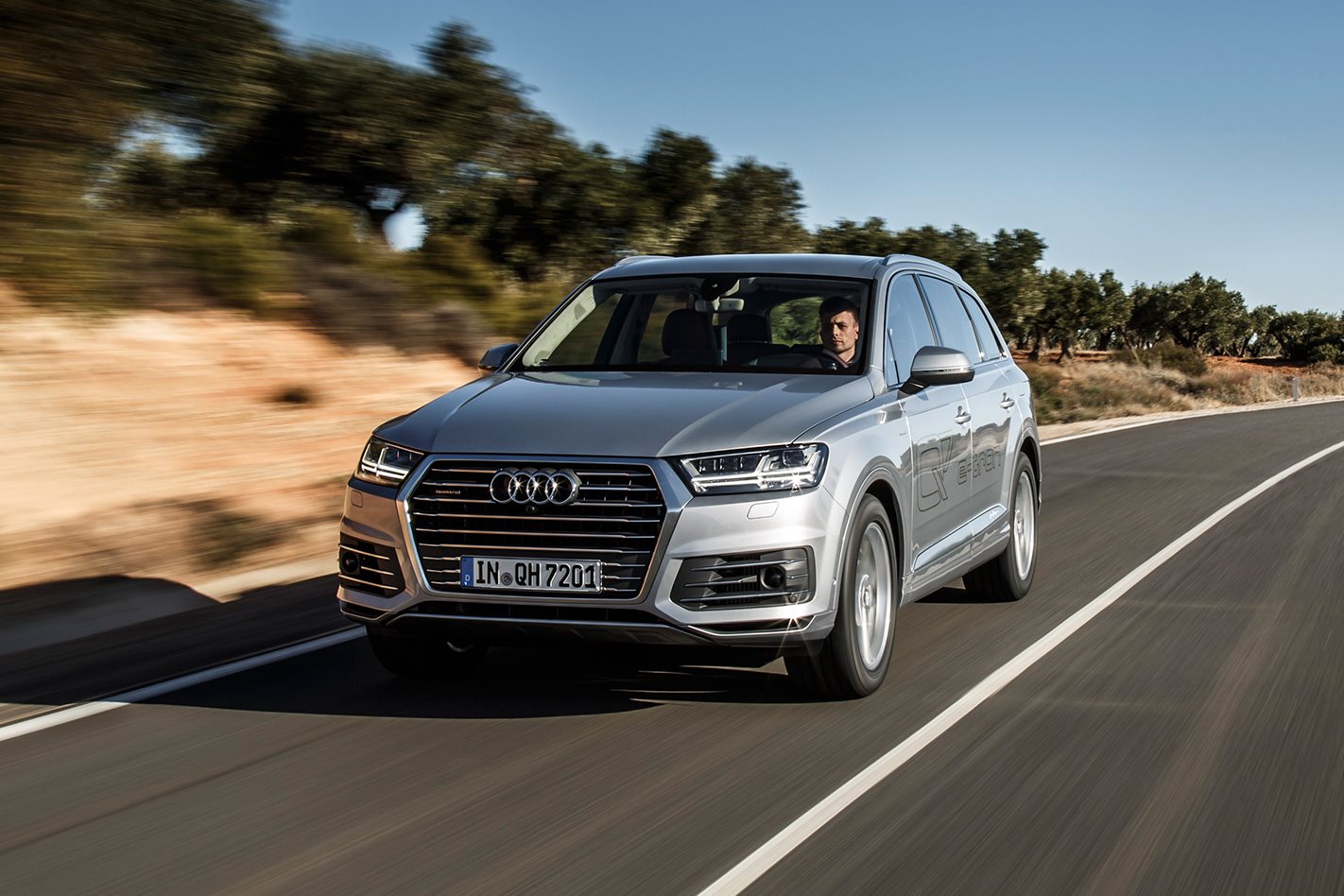 During our two-day blast across Germany’s south, the e-tron would periodically fire the V6 diesel and then revert to emissionless power – sometimes apparently without logic – but with a constant eye on traffic conditions and even the gradient of the road ahead, it knew more than its occupants.

Contrary to popular belief, Germany’s coveted autobahns are not perpetually flowing with high-speed traffic. We encountered more than our fair share of jams, but here too the e-tron offered a distinct advantage with Audi’s traffic jam pilot. With the system activated we could sit back and let the Q7 look after the steering, braking and even acceleration until the congestion ahead had cleared. 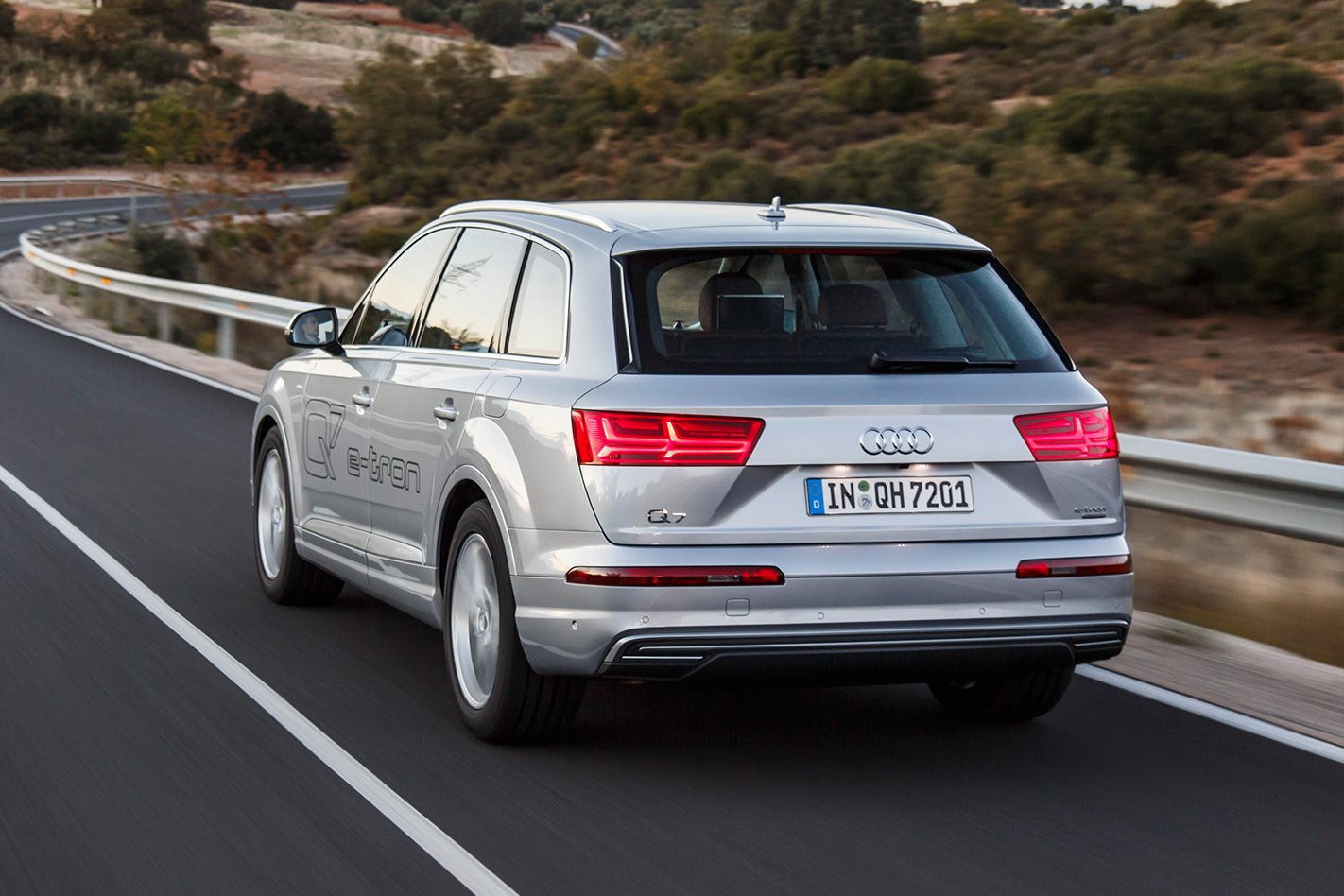 And when it did, the e-tron is just as happy at more typical autobahn speeds. With diesel and electric motors working in unison, the Q7 can hit the 0-100km/h benchmark in just 6.2 seconds and won’t stop until 230km/h flashes up on the digital display. Weighing more than the diesel-only Q7, the e-tron sacrifices a little in dynamics but its straight-line performance is remarkable and 200km/h rolls around surprisingly quickly. Our travel companions in an SQ7 were only just getting away. Add to that a fuel economy figure that ended up only just thirstier than the official 1.9L/100km (and at times better), and you have a very accomplished vehicle.

Other than the impressive efficiency and performance, there is little else to suggest the latest Audi large SUV is a PHEV. Its interior is roomy and top quality, ride quality is impeccable and noise levels are low even at high speed. The lack of a spare wheel and third row of seats – the battery pack is housed under the boot floor – are our only qualms. 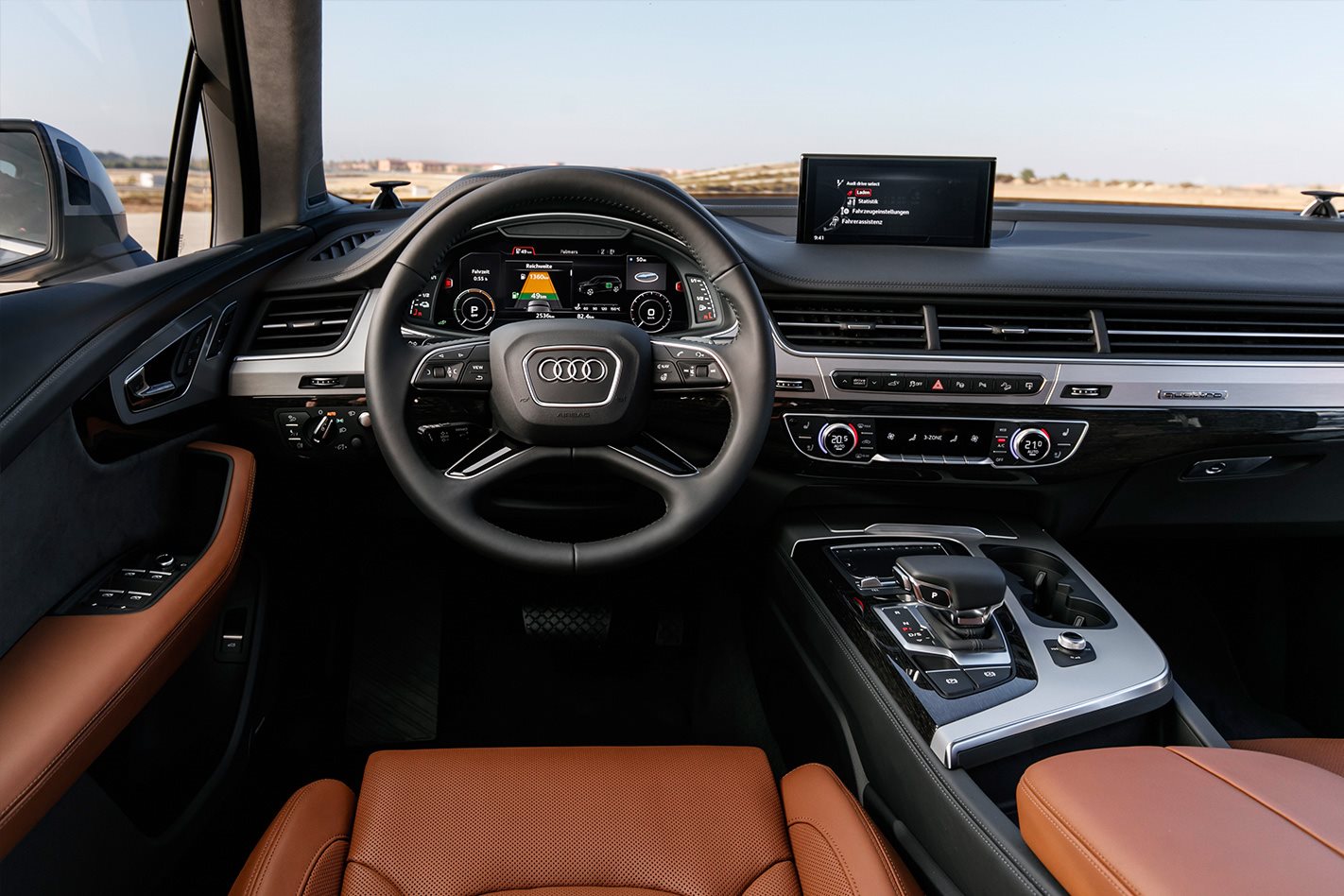 It has taken a little longer than originally forecast for Audi’s first electrified SUV to arrive Down Under but, a brief reacquaintance before it plugs into the Q7 range in January has reminded us that there are still more pleasant surprises to come for Audi’s large SUV line-up.

Germany’s EV infrastructure is helping prove the PHEV principle and we had ample opportunity to recharge the e-tron on our trip, including at our accommodation, at the airport and even during a coffee stop in a small town. By comparison Australia still has a long way to go in encouraging customers to make the leap and plug in. 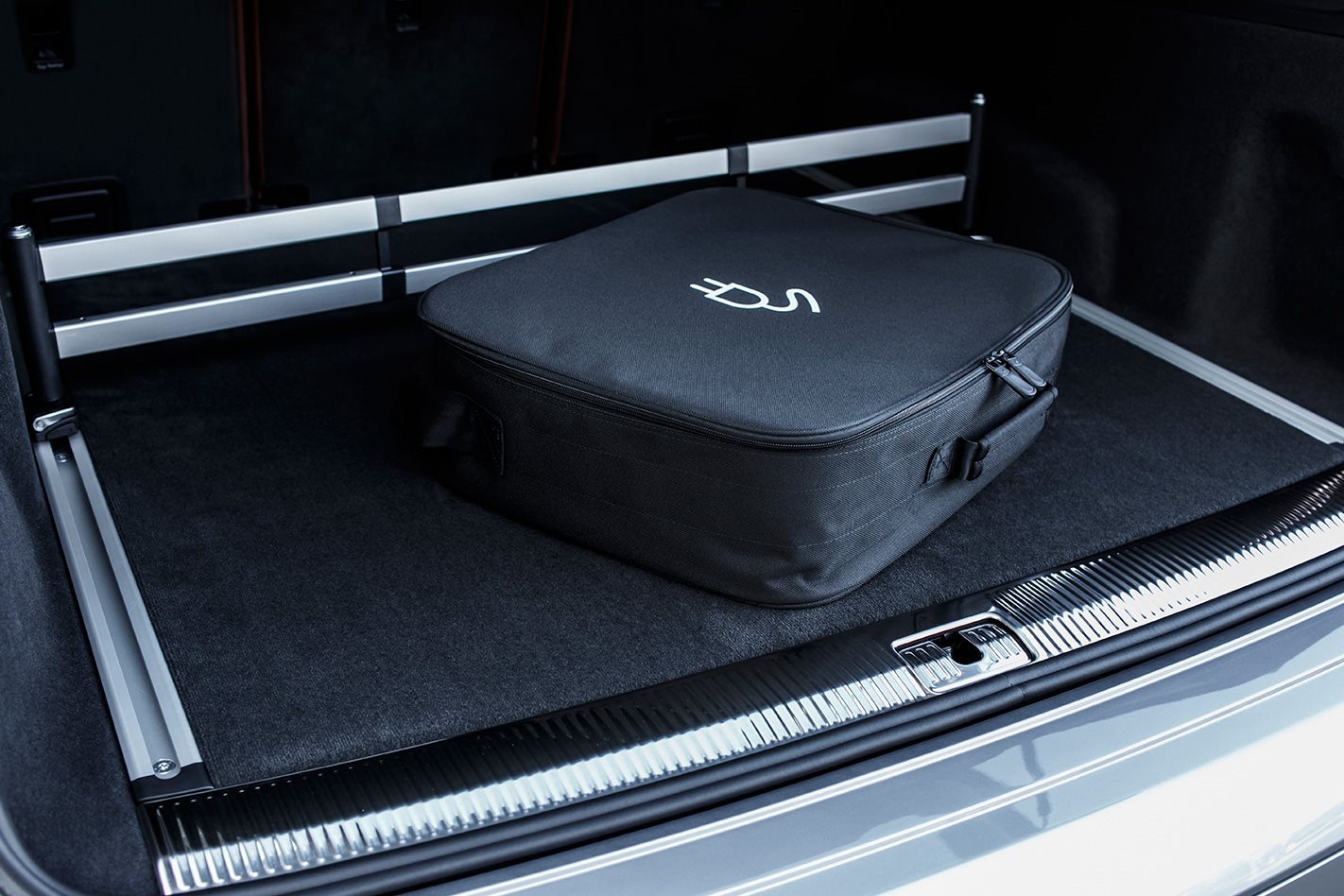