Ever had that sphincter-clenching moment when you’re on the way out the door and you realise you haven’t charged up your phone and you JUST KNOW the five percent remaining charge won’t last long enough to see you through to the next available wall outlet?

Terrifying indeed, but what if you could instantly inject a few more kilojoules of energy into your phone by dousing it in petrol? Handy, right? 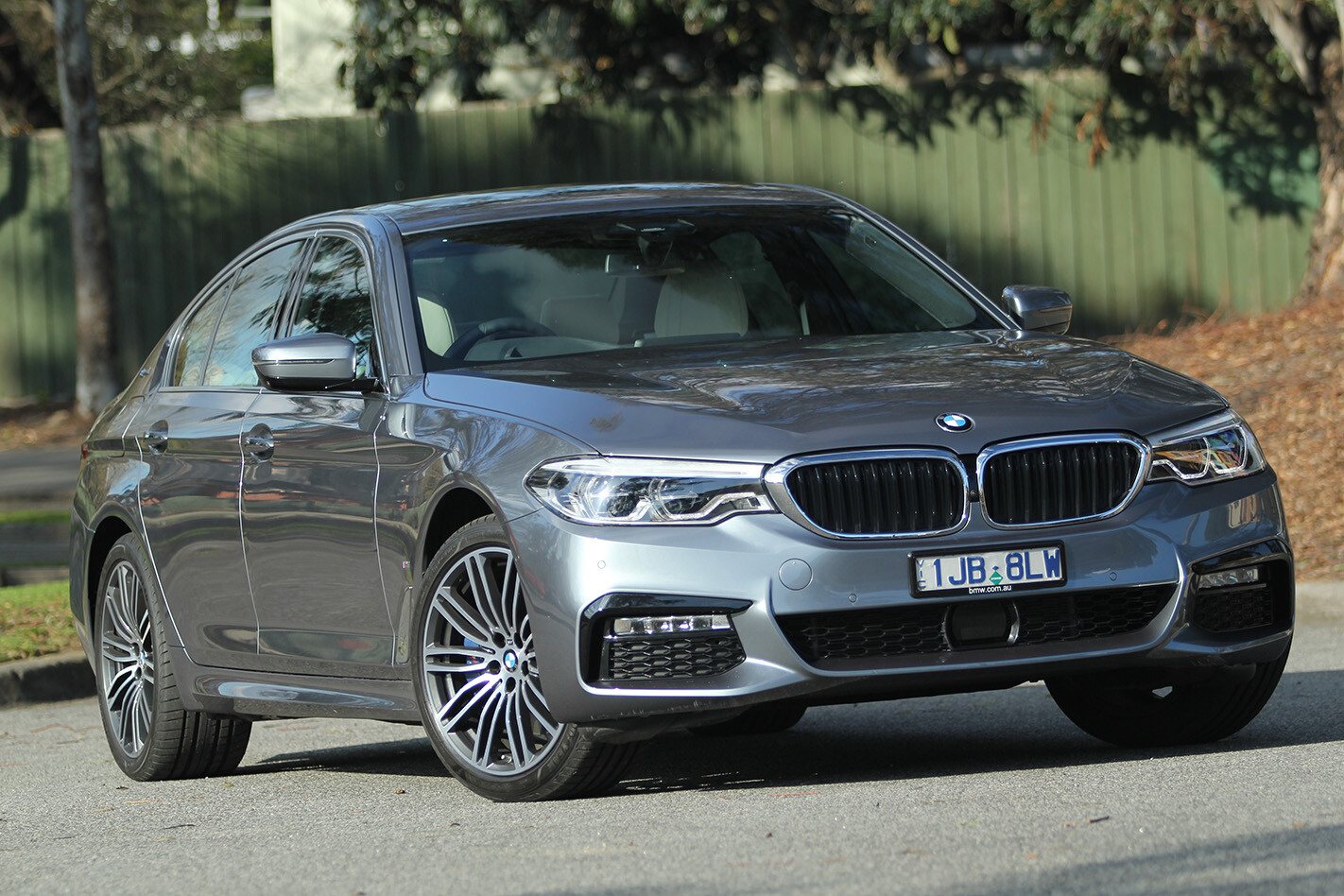 That’s the logic behind plug-in hybrids, the have-your-cake-and-eat it solution for those sufferers of the ultimate first-world problem: EV range anxiety.

After all, with the ability to both charge up from a wall outlet AND draw power from a conventional petrol-powered engine when the battery simply isn’t big enough – or power points aren’t available – a plug-in hybrid is meant to be the theoretical “best of both worlds” device.

Is it though? We spent a week behind the wheel of BMW’s 530e iPerformance plug-in with the goal of running it on electric power as much as possible. Granted, that’s not really the intended mode of operation for BMW’s battery-enhanced 5 Series – the small capacity of its 9.2kWh lithium-ion battery coupled with low EV-only outputs are clues that the German manufacturer expects most owners to operate it as a conventional hybrid most of the time. 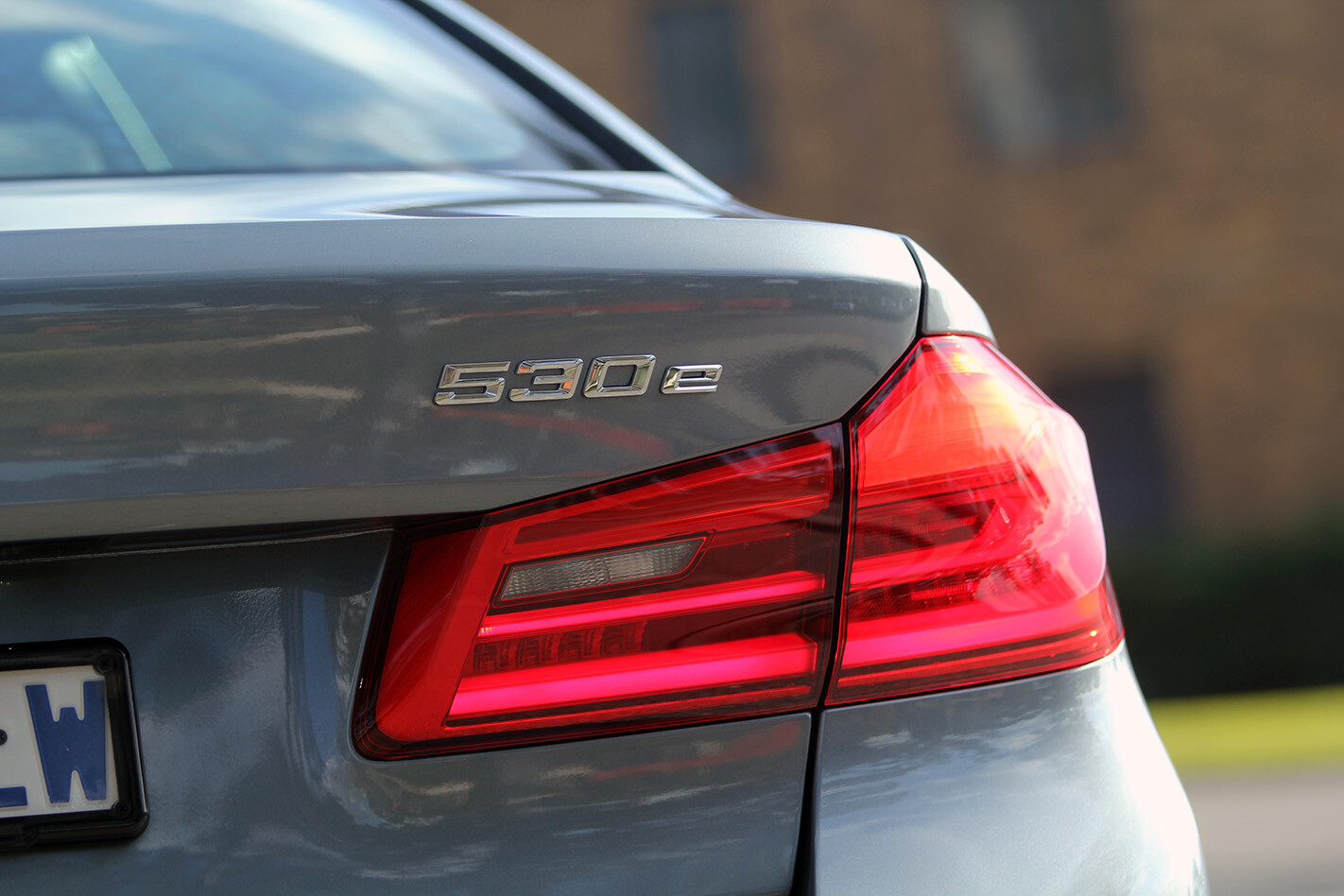 However we’re here to test whether a determined owner could conceivably – and conveniently – use a 530e to escape the tyranny of the petrol price cycle. Spoiler alert – the answer is ‘yes’… but with more than a few ‘buts’.

Looking at the spec sheet, BMW claims the 530e can cover up to 50km in all-electric mode. That’s optimistic, and a number that comes with several caveats. If you’re okay with running sans heater, air conditioner, headlamps and pretty much anything electrically-powered that isn’t the car’s 70kW drive motor, you may get close to that number.

Fat chance of choosing that path in the dark, frosty heart of a Melbourne winter, though: I’ll take a range reduction in favour of a warm cabin, thank you. 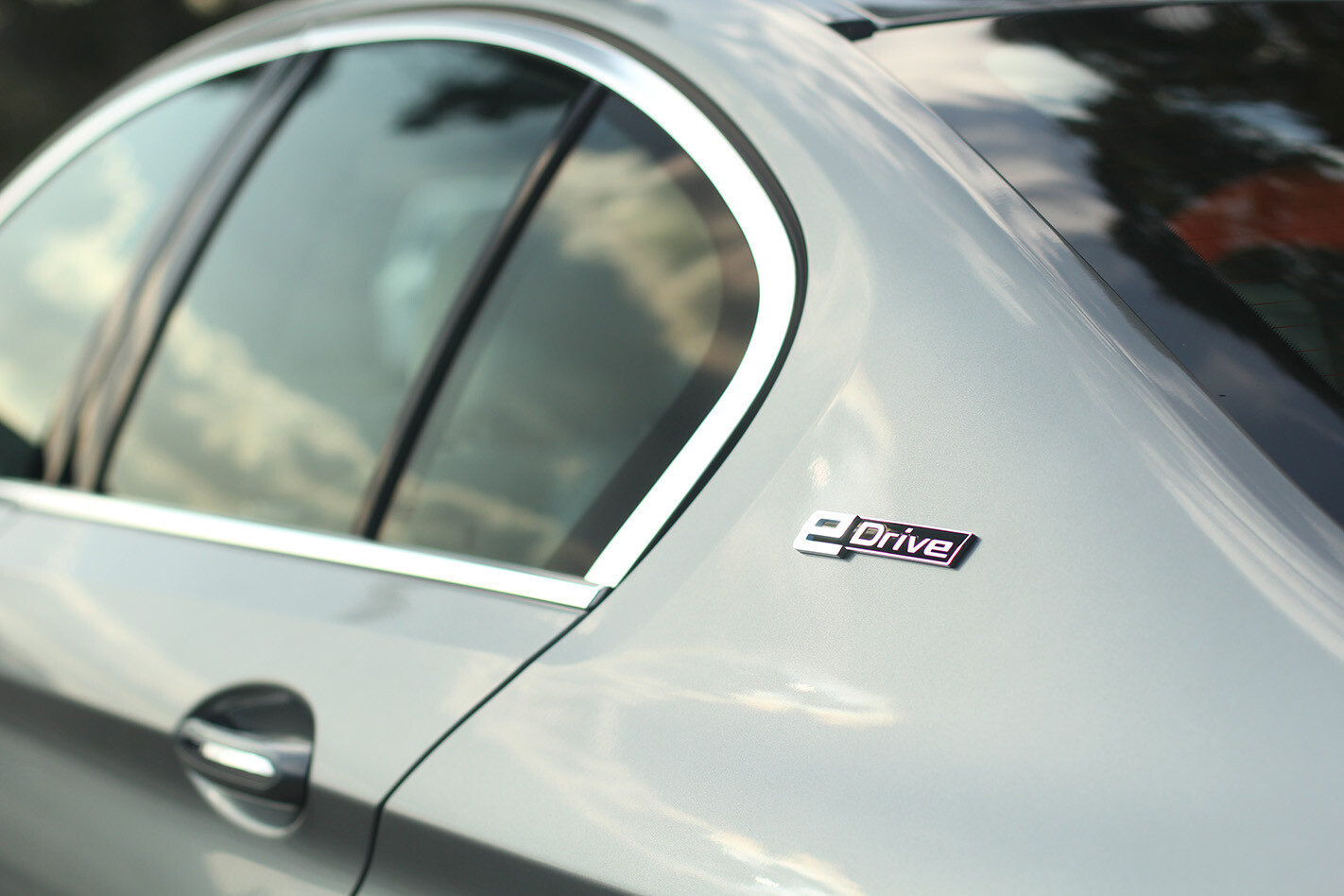 A more realistic range is somewhere between 30-40km, a figure that spares a few electrons for luxuries like demisters, the wireless phone charging pad, heated seats and climate control. Given the average Australian commute distance is roughly 15km, a battery with 30-odd kilometres of charge should be enough to last most motorists a full work day, right?

Day one in the 530e was a wash. Picked up from BMW with a full battery, it was then driven 42km from Wheels HQ to the airport. The battery ran out of juice about three-quarters of the way there, forcing us to burn precious hydrocarbons in order to make our flight. Damn.

Once at the airport, one of the bigger issues with EV ownership presented itself: the lack of charging infrastructure in Australia. Unless you own a Tesla and can afford to park at Qantas Valet, you’re fresh out of luck if you want to juice up your EV at Melbourne’s principal air transport hub. Battery still empty upon our return to Melbourne, we sent a few more kilograms of CO2 into the atmosphere on the 41km drive home. The next day was the first real test, a proper home-to-work-to-home commute that would begin with a fully-charged battery and hopefully end with a few volts still remaining.

Helping the 530e’s cause is its ability to pre-heat the cabin ahead of departure while still plugged into mains power, as long as you remember to programme the time you intend to leave before putting it on charge.

The advantage of that is twofold – not only do you get to hop straight into a toasty warm car, but you also don’t have to watch your range melt away as precious battery power is consumed by the heater. In winter, it’s one of the 530e’s best features. 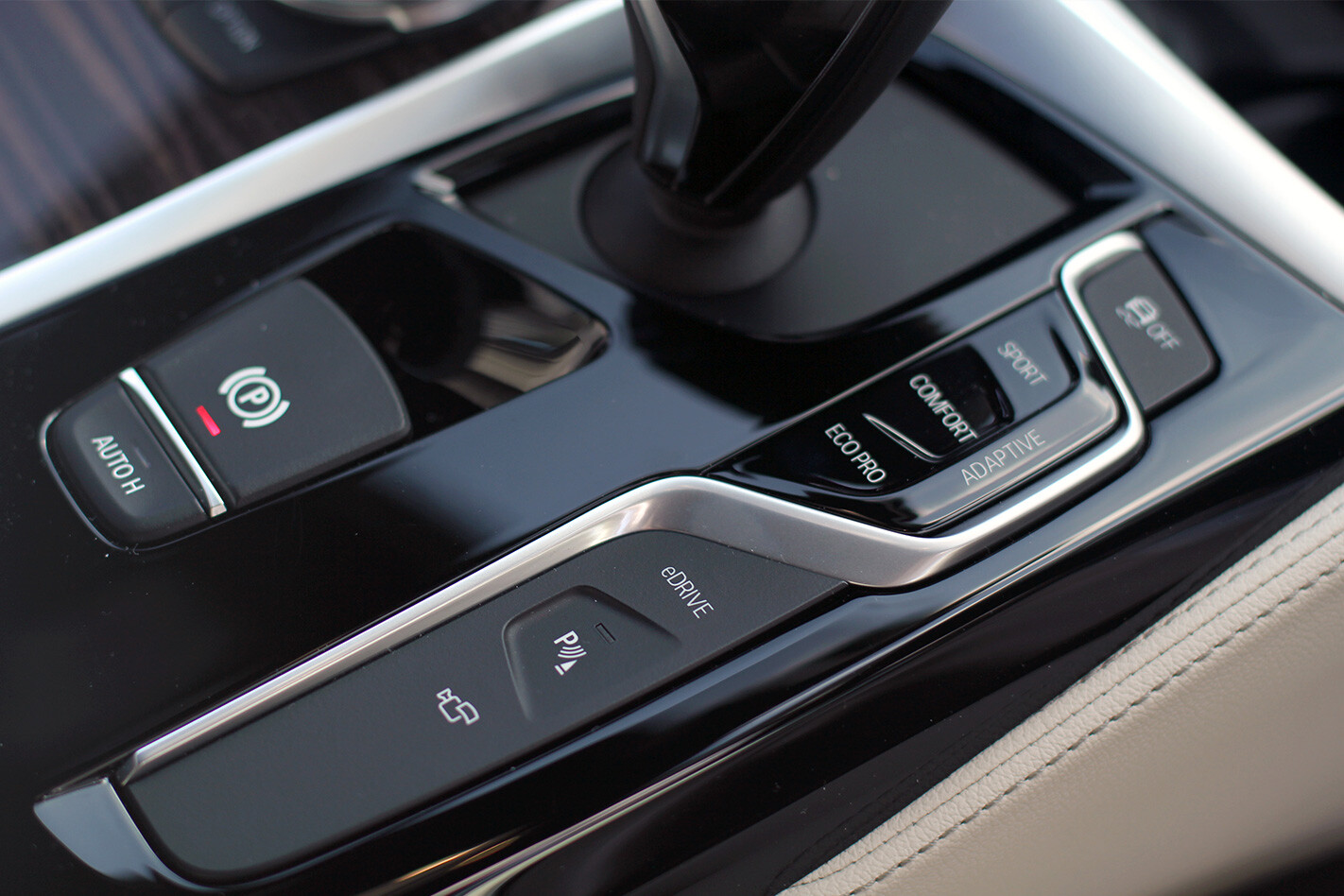 Keeping the 530e in a pure electric mode is easy. Just prod the eDrive selector switch on the centre console once to toggle from the default hybrid mode into Max eDrive mode, which prevents the petrol engine from sparking up until the battery state hits zero percent. Reaching the office, the range indicator showed 15km remaining after using this mode – plenty for the 12km trip home.

Or so we thought. Stop-start traffic in the late afternoon must flow less smoothly than in the morning, and the constant acceleration/deceleration cycle saps power at a greater rate than when cruising at a more consistent speed, even with the energy recuperation provided by regenerative braking. We were two kilometres shy of home base when the battery gave up and the petrol engine kicked in. The answer had to be to charge up while at work. The 530e’s ability to charge up from any conventional power outlet is an advantage, but it meant having to unravel its charging cable upon arrival at the Wheels carpark every morning – a time-sapping chore, and one that’s extra unpleasant when it’s raining.

At least the drive home could be done without worrying about conserving range, and the four hours needed to take the battery from empty to 80 percent (bank on six hours for a full charge) is easily compatible with the workday cycle.

But given we were driving less than the average commute distance, having to top up the battery at the workplace was a little bit of a letdown. After all, not everyone will have the luxury of tapping into powerpoints at their workplace. Paying a visit to a friend across town also had us with the charge cable in hand, sheepishly asking to borrow some volts.

A wireless charging capability will be available as an option from next year, but again there’s an infrastructure issue. Unless it’s your own garage or driveway, don’t count on there being many inductive loops for you to park your 530e over. Living an EV lifestyle is a difficult one when the battery is small, however the payoff in our week behind the wheel was an indicated average consumption of just 1.7L/100km. Pretty decent for a luxury-laden large car, and 0.2L/100km under BMW’s own fuel consumption claim.

However BMW needs to work on the 530e’s brake feel. Many manufacturers struggle with giving their hybrids a smooth and progressive brake pedal, thanks to having to integrate regenerative braking with conventional mechanical brakes. However the 530e’s mushy pedal – which only seems to get softer the further you press it – is well below par. We often found ourselves coming to a halt much closer to cars in front simply because it was hard to gauge how much pedal pressure was needed.

There are other compromises too. With only the 70kW/250Nm electric motor in play the 530e’s performance is best described as ‘borderline adequate’. Fine for commuting, especially with peak torque being available from the get-go, but a little short of breath on highways.

A significantly shrunken boot capacity is another 530e-specific handicap. 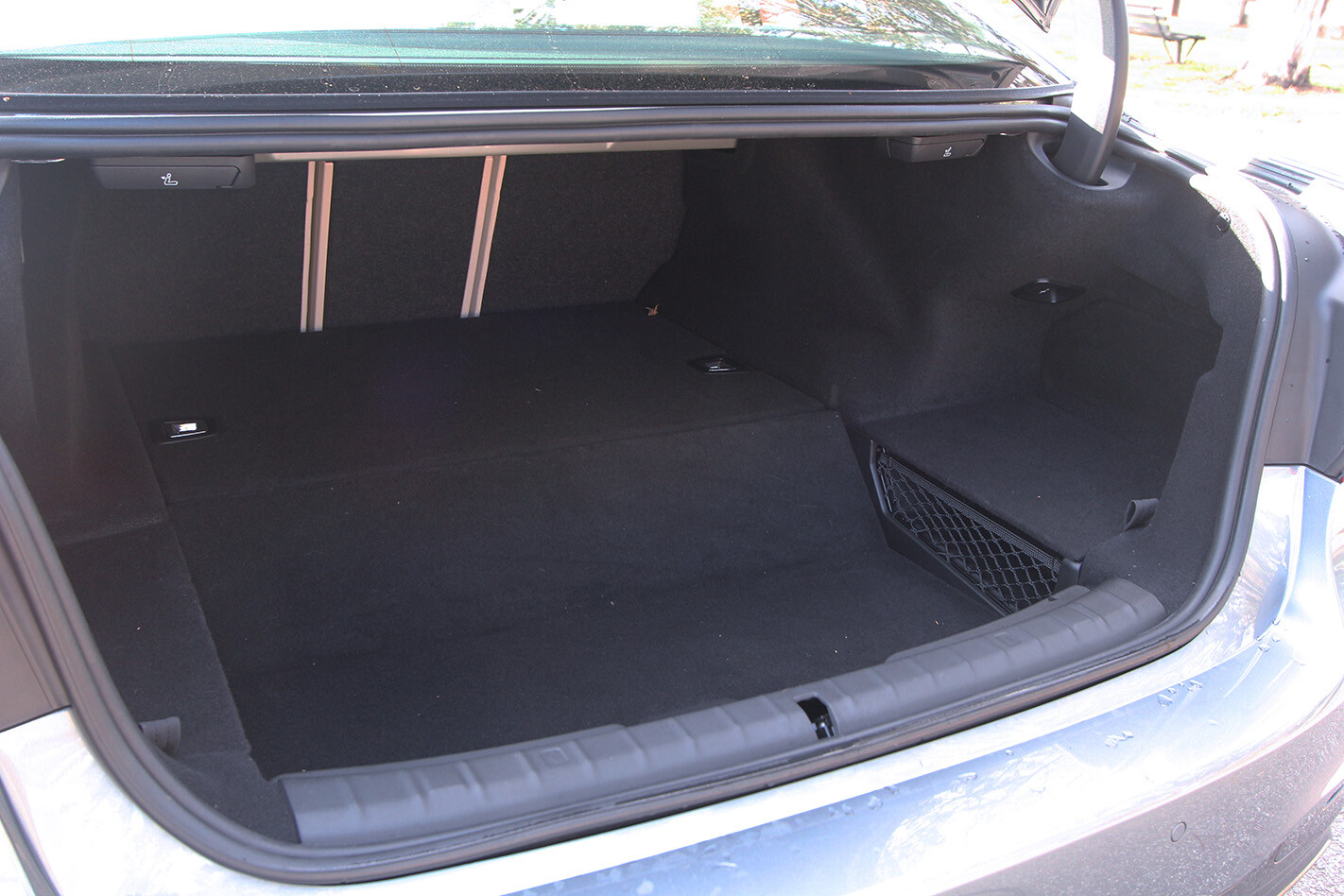 If you’re expecting a German equivalent to a Tesla Model S you’re gonna be disappointed, but if you really, really need more power there’s always the option of waking up the petrol engine and unlocking the car’s full 185kW/420Nm output.

Of course, that’s the 530e’s “killer app” right there – the ability to spend most of its time under electric power, with the option of petrol power whenever you should want or need it. The only problem is that even during what we considered to be a modest amount of motoring we were forced to revert to fossil fuels when we didn’t want to.

If BMW were able to double the battery capacity, living a life largely independent of the petrol price cycle would be far more achievable. Until then, better keep that charging cable within easy reach.