How do you follow a car like the Veyron? With the 1103kW, 420km/h Chiron – excess is only the starting point.

It’s the calm before the storm. On a blurry-eyed Sunday morning on the outskirts of Lisbon, the gleaming two-tone piece of automotive art is dormant on a cobblestone driveway. Even more so than the Veyron, Bugatti’s second hypercar effort is a statement of extreme technology and mind-boggling wealth. Now more than two-metres wide without wing mirrors, but only 1212mm tall, the mighty mid-engined Chiron automatically switches all six senses into overload. A visual feast, the carbon fibre rear bikini top struggles to cover the monumental W16 powerplant, partially bare exhaust and quad turbos. The rear-end panel, also made out of perforated carbon fibre, incorporates the full-width single-piece taillight and indicator unit while also forming the base for the five-stage rear wing. If you ever wondered what a piece of Cartier jewellery for the road would look like, this is it. The Chiron is both cosseting and radical, an unequivocal example of mechanical genius wrapped in a cabin fit for the Savoy Hotel. It proudly wears the enamelled Bugatti oval like a brooch, clads its muscular proportions in slim-fit, lightweight fibres and occasionally pops the air brake as if it is turning up the collar of its coat. To underline the graphic link to Ettore Bugatti’s style-setting creations, the design team, under Achim Anscheid and Etienne Salomé, added such trademark elements such as a full-length middle part and C-shaped chrome accents framing the doors. 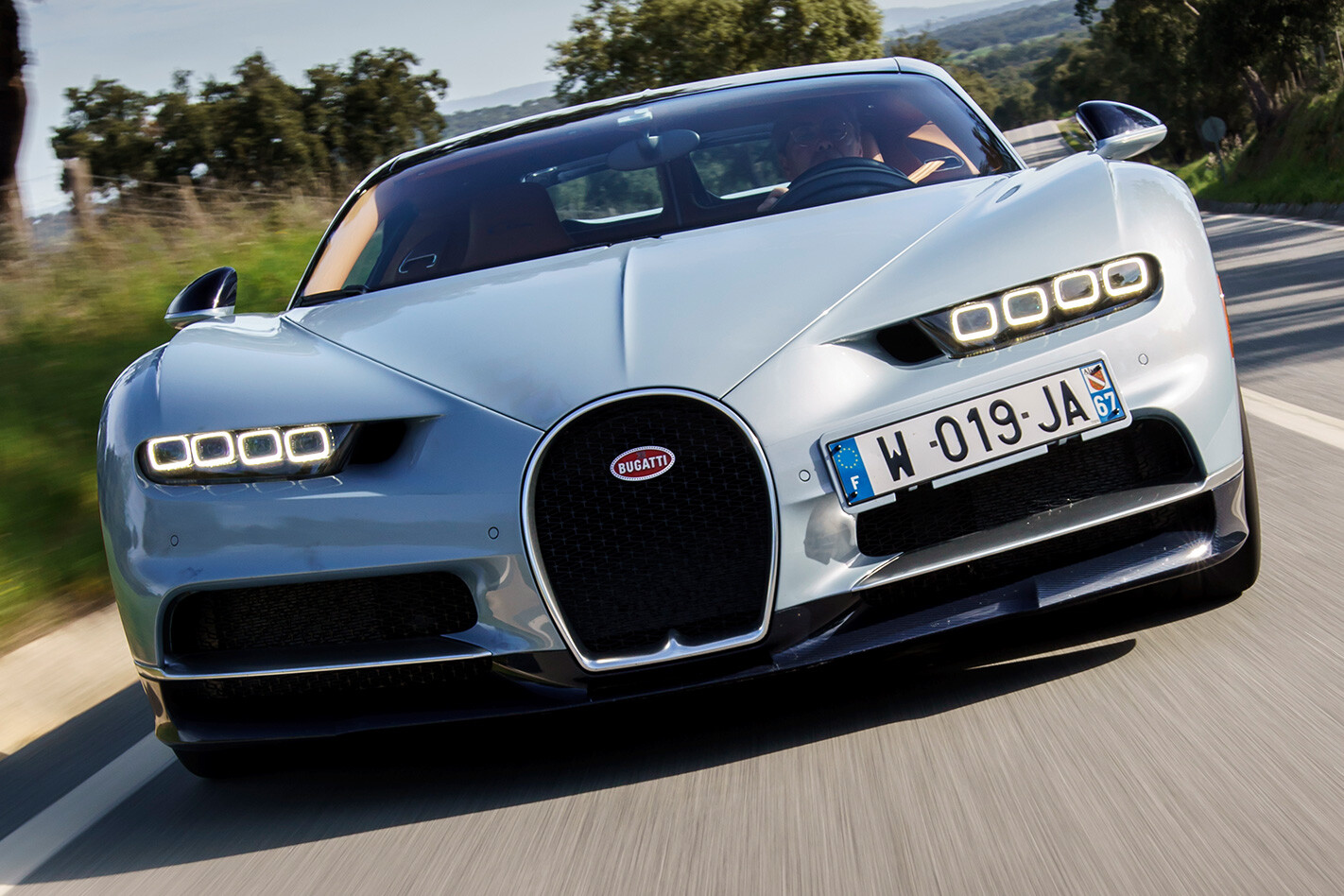 The cut lines that separate fewer panels are even slimmer, the ‘no plastics’ philosophy has reached new extremes and weight saving was the number-one priority. At 1103kW and 1600Nm, the 8.0-litre, quad-turbocharged W16 is now as potent as a Rolls-Royce Merlin aircraft engine. Aided by all-wheel drive with active torque split, the stunning two-seater can accelerate to 100km/h in 2.5 seconds, reach 200km/h only four seconds later and hit the 300km/h mark from rest in a mere 13.6 seconds. A separate mode allows you to access the (limited) 420km/h top speed. At the wheel beside me is Le Mans winner Andy Wallace. He takes the helm for the first of five legs and saunters through the light, pre-breakfast traffic. As the passenger, I’m bracing myself mentally for things to come. There is already a flood of first impressions to digest, such as more legroom, the beautiful balance of dark and light hides, out-of-this-world surfaces and a slim centre console machined from solid aluminium that houses four rotary display and control units. In yellow-streak mode, the passenger receives first-hand information on G-force, speed, the amount of power used and the fuel consumption. As long as you don’t tell anyone, we are happy to share our readouts. So that would be 1.3g, 362km/h, 1103kW and 88L/100km across the first hardcore stretch of Autopista. 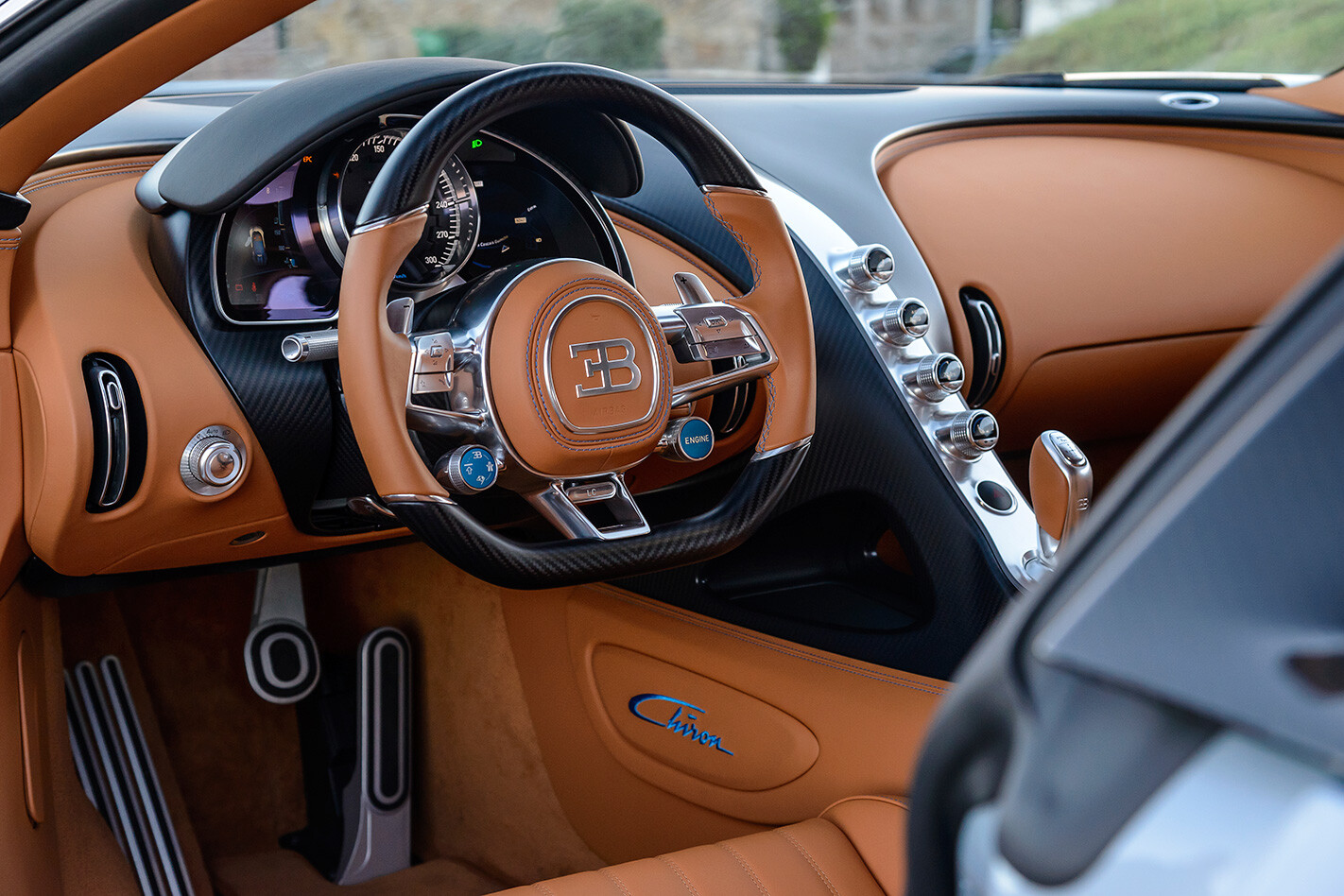 It’s time for a driver change – Wallace out, and me in – though a word of warning to those of the taller, more rotund variety like me, be wary. Practising a reasonably smooth entry and exit is essential. It takes a bit of time for the redundant left foot to come to terms with the protruding tunnel, for the right foot to memorise the throttle/brake pedal height arrangement and for the arms to find a comfortable distance to the steering wheel. Although the seat is generously adjustable, it could do with a little more padding and more substantial lumbar support. The redesigned instruments consist of a large speedometer with a wild 500km/h top speed, analogue horsepower and rpm readout and a multifunction secondary display.

As soon as you give the Chiron some stick, however, the only target your eyes must concentrate on is the road. A head-up display would be nice to have given the ferocious pace, but assistance systems in general are conspicuous by their absence. “In a puristic driving machine like this, less is more,” CEO Wolfgang Dürheimer says, and there isn’t the faintest trace of a smile on his face. I once hit 408km/h in the Veyron on the back straight of VW’s Ehra-Lessien proving ground. As long as you take enough momentum out of the banked 180-degree corner, 420km/h should also be doable there. But for the next speed record, which has unofficially been set at 450km/h, Bugatti is considering the 4.9km runway at Upington airport in South Africa. However, that’s not where we are today; instead we’re on a humble three-lane Portuguese highway where the speed limit is 120km/h. Luckily, the police know what we are doing, yet passing other vehicles requires caution. Someone with more self-restraint and who didn’t give in to temptation might have followed the rules – but how often are you at the helm of a 1103kW car on dry tarmac and aren’t impeded by traffic? That’s what I thought. So I shift down from seventh to fifth and gunned it. Reading the road ahead is absolutely essential and requires total concentration. At these speeds the brain is racing, firing off questions and making split-second decisions: how long is this straight? What’s happening over the brow? Is the middle lane empty? Did my passenger just clear his throat? Hitting 250km/h is easy, so much so it barely raises a sweat. Then 300km/h arrives so fast that it’s hard to keep recalculating speed, distance, braking distance and how these parameters relate to the motorists around me. Scarily, 300km/h comes and goes with remarkable indifference. It’s not just the high speed that makes the mind boggle, the real eye-opener is the relentless forward thrust. “Better take it easy now,” suggests the pro driver beside me, so I lift and begin to coast – 275, 250, 225km/h. “There was a radar trap under that bridge a couple of days ago,” I hear Wallace mutter. Sure enough, the law had long cleared the suspicious spot, but the opportunity for another flat-out run doesn't appear for another 25km.

“Give it a try again once we’re past exit 12,” I hear from my eager side kick. I don’t need to be told twice. When it does come into sight, the straight is shorter than expected, but I tell myself, ‘what the heck, let’s do this’. The fast, blind left hander leading on to it tugs on the neck muscles – 265km/h and still going strong. A couple of seconds later the road opens up again, but at 325km/h and counting, even the widest road narrows fast. One small camber change is all it takes for the Chiron to briefly straddle the dotted line. You see, at 350km/h progress is a funnel-shaped experience, becoming increasingly blurred on both sides of the flight path. Objects are coming and going almost too fast for the human eye to comprehend. The moment Wallace instinctively nudges his left hand forward, I slam on the brakes and the rear wing comes up with a howl to a near-vertical 49 degrees. The downforce is such that it’s nailing the car’s broad nose to the ground while the four calipers grab the carbon-ceramic discs with vigour and the large cooling ducts and heat shields discharge peak temperatures with an audible swoosh. The tyres bite hard, meaning it takes just 375 metres to come to a complete halt from 300km/h, sans reaction time. While the test car’s data-logging system shows a top speed of 362km/h, what it doesn't reveal is the busy deceleration over gaping expansion joints, the countless, minute corrections and the hissing heat dissipation. Like the unstoppable forward thrust, the full braking capacity is physical, so you better hold on to your breakfast. On secondary roads, the Chiron darts like a barracuda. The take-off kick at the traffic lights has a catapult effect that almost hurts, the explosive torque launches the car like a seven-stage moon rocket and the horizon approaches in big, fast steps. Oil companies must love this engine. The fuel consumption over the initial high-speed stretch was so obscene that the first pit stop beckoned after only 55 minutes. According to the official test cycle, the rapid Bugatti averages a much less offensive 22.5L/100km. Wallace says that 35L/100km is a more realistic figure, though, which suggests that the 100-litre tank needs refuelling every 280km. 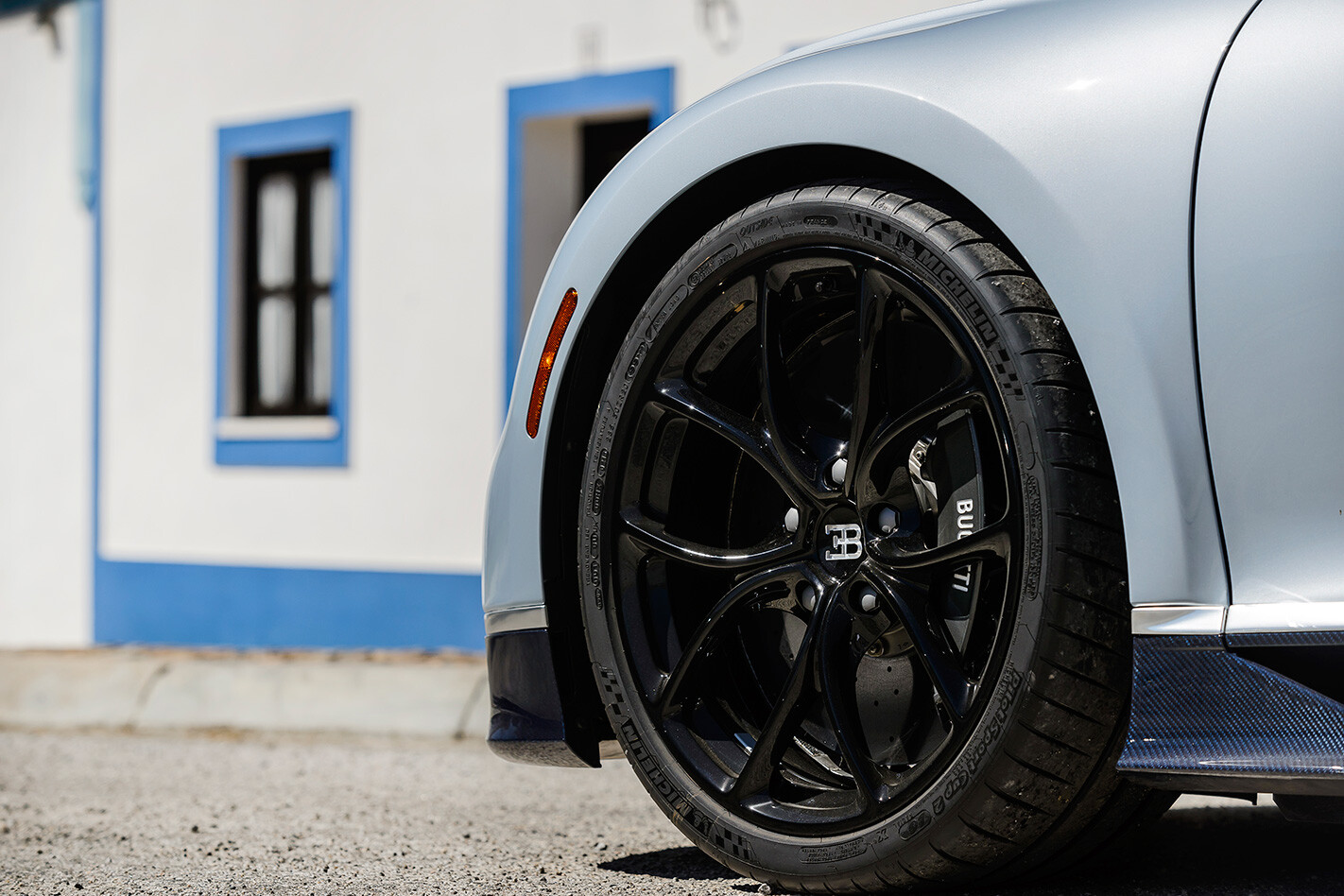 Tipping the scales at 1995kg, the Chiron is 100kg heavier (yet vastly more powerful) than the model it replaces. On paper, the considerable bulk, weight and momentum do not bode well for serious corner chasing. However, the reality is that the new Bugatti benefits from a much stiffer body, more direct steering (only 1.25 turns lock to lock) and a user-friendly torque curve which dishes up 1600Nm from 2000 to 6000rpm. What also helps is the nicely balanced weight distribution, the north-south and east-west (rear) diff locks and the extra grip provided by the 285/30 R20 and 355/25 R21 ultra-high-speed tyres. 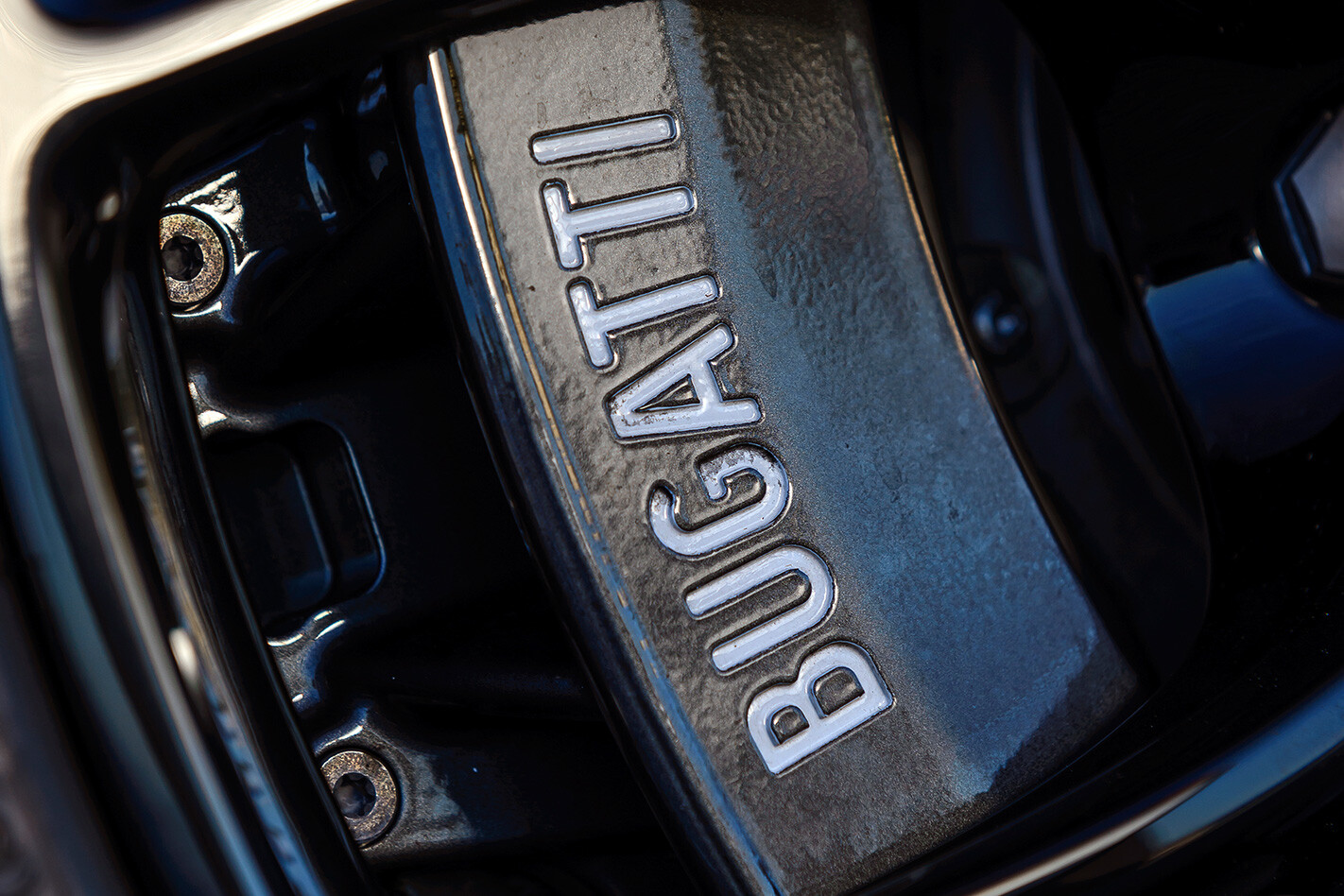 The route along the coast from Lisbon towards Faro holds plenty more arrow-straight temptations dotted with dips and brows, but an inland diversion is required to reach higher altitudes and the serious corners. Although the blue DNA selector does contain an easy-to-drift feature, it would take a brave soul to slide this monster past apexes that have rocks on one side, trees on the other and a narrow patch of blacktop in between. 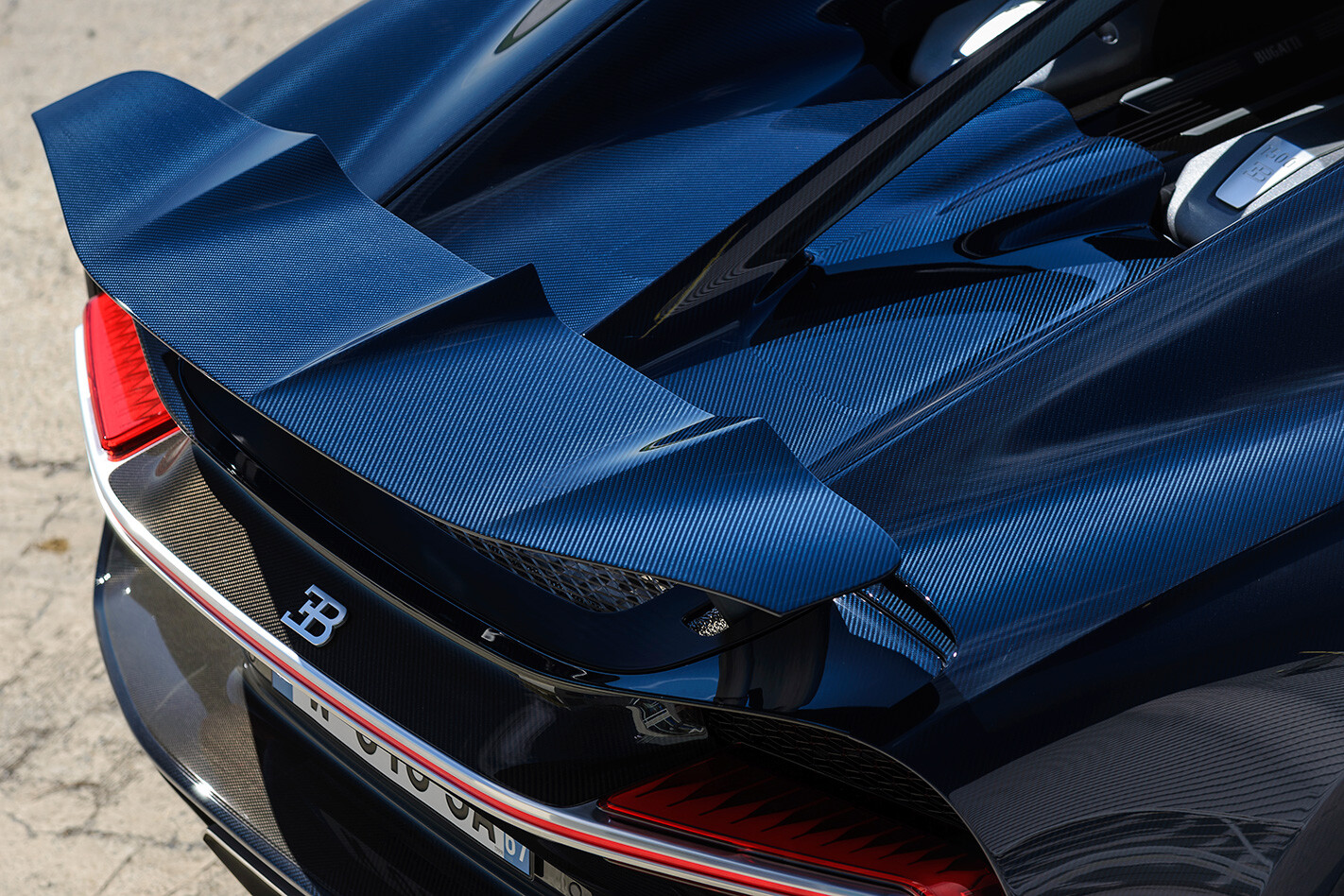 The steering, which feels so relaxed at very high speed, takes some getting used to as soon as tighter corners come into the equation. Why? Because it responds with aplomb, turning in aggressively and unwinding lock speedily, while it is almost too communicative for its own good. Even without rear-wheel steering and active anti-roll bars, the quick steering makes the Chiron feel smaller and lighter than it is. The blend of all-wheel drive traction, supernatural brakes, surreal cornering grip and seemingly unlimited forward urge results in an eerie feeling of invulnerability. 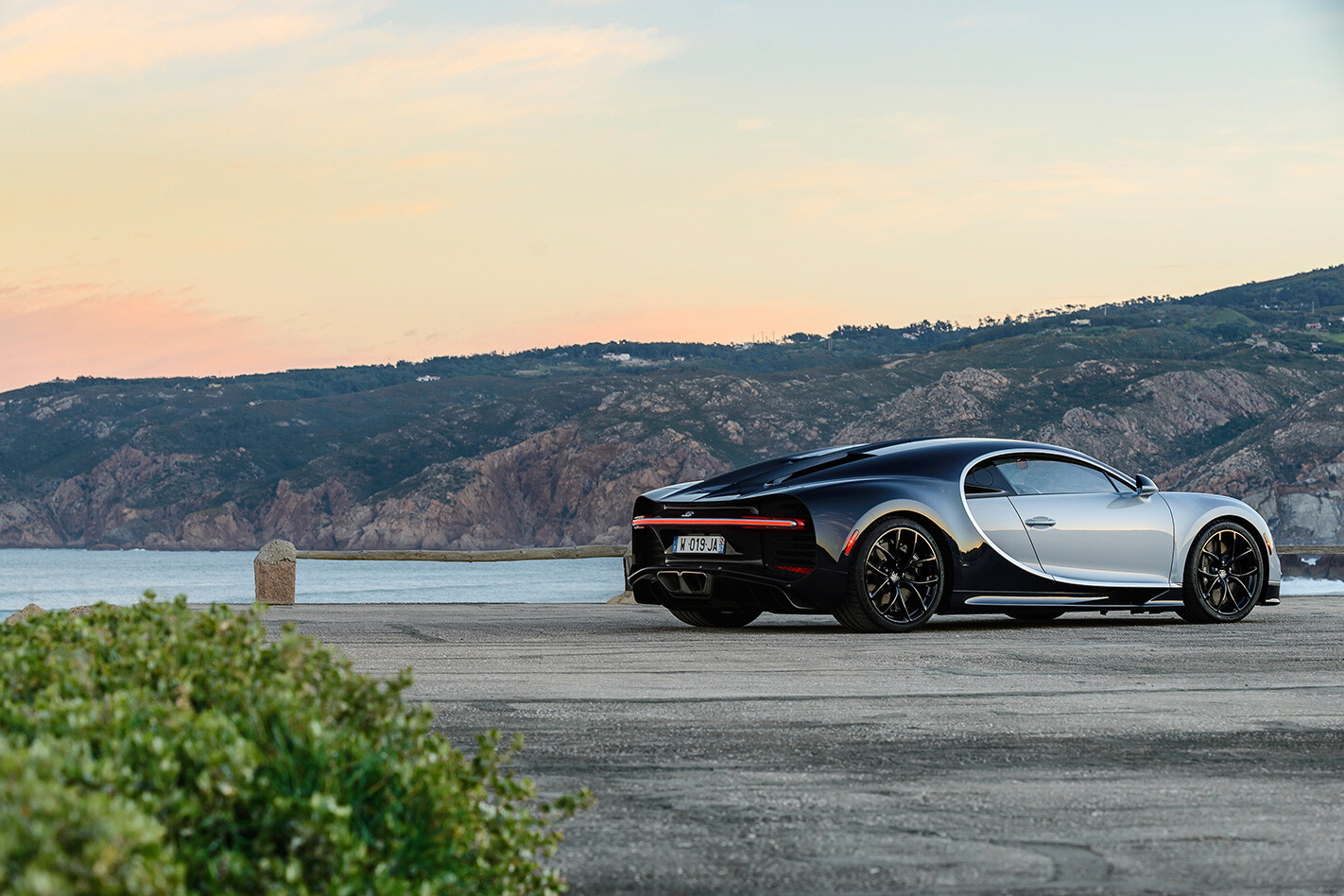 Unlike its rivals, the Bugatti is not only about performance but also about style, manners, accessibility and confidence. A hugely competent piece of kit, it does not brag about its talents. Under full load every con-rod must sustain 1300 kilos of weight, the lubrication system pumps through 120 litres of oil per minute, the air intake swallows a whopping 1200 litres per second, the high beam is only recommended up to 400km/h and the duration of a V-max stint is determined by momentary tyre loads and temperatures – it’s all staggering.

And yet, all you hear are the slight sneezes from the turbos and their wastegates, the rolling thunder of the Michelins, the grinding noise of the brakes and the quadrophonic full-throttle upshifts. The twin-clutch is energetic, but not ruthlessly so, the ride is firm, but at all times sufficiently compliant and the ergonomics are intuitive – it works as a car, not just a supercar.

Of the 500 Chirons, more than 260 are already spoken for. Order one today, and chances are you will take delivery of a modified and more powerful version. The only available options are of the cosmetic kind, like a full carbon fibre exterior in the tint of your choice, which costs $350K extra. But then, money is no object to the typical Bugatti customer. Ultimately, true speed junkies must do whatever it takes to climb behind the wheel of this epic piece of machinery.