Three hundred and fifty clicks, and counting. Down the descent, up the other side.

Effortless, so fast it’s surreal. Now 370. There’s a good reason why Bugatti CEO Wolfgang Dürheimer’s black polo shirt is embroidered ‘Bugatti 400’ – the man moulding the marque is a member of the 400km/h-and-over club. Is this 1120kW ride going to raise my PB, eight years after seeing 408km/h in the original 736kW Bugatti Veyron?

It isn’t – because Wolfgang slams on the brakes as we approach a blind crest at fighter-pilot velocity and decelerate to 200, avoiding a silver Sharan meandering into the fast lane, texting thumbs a-blur.

The Bugatti Chiron, named for 1930s Bugatti racer Louis Chiron, the only Monegasque to win his home grand prix, is currently limited to 420km/h – Chiron raced in F1 until he was 55, but never tasted speed like this. 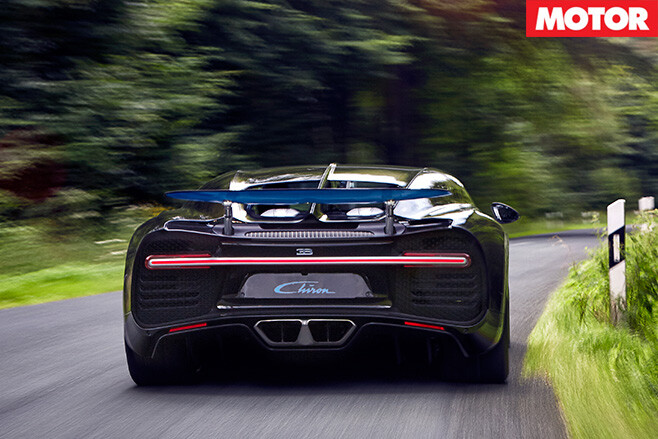 That top speed comes with the speed key turned on, the chassis squatting low, the rear rudder fixed in V-max mode and all 50 computers wide awake. But chief test driver Loris Bicocci is reportedly due to attempt a new street-legal coupe record – 450km/h on VW’s Ehra-Lessien V-max proving loop.

“Even more than in the Supersport, 350km/h is incredibly accessible now,” says a beaming Dürheimer, clearly enthusiastic about his third supercar project after the Porsche Carrera GT and 918 Spyder. “As soon as 450km/h has been established, 500 will be the next focus. That’s progress, like it or not.” To prove the point, the analogue speedo runs to a completely outlandish 500km/h.

Dürheimer is a highly competent driver and stays cool in spite of the Sharan and many like it. At 300km/h he chooses a tighter line than when trailing a bunch of vacationing zombies, he avoids boy-racer take-offs, hooning around empty roundabouts and enemy-making downshifts. With 1600Nm between 2000 and 6000rpm, the Chiron’s gears are almost passé: three, five or seven – it doesn’t make much difference when the hammer drops and the four Michelins squirm and turn themselves into dust.

Despite a list price of €2.4m Euro (AUD$3.53m) plus tax, 230 of the 500 units are spoken for and the Chiron may well sell out in the next 12 months. But never fear if you miss out – the Vitesse and Supersport will be resurrected, along with a host of specials.

We’re in one of 10 pre-production Chirons, a solid black specimen with electric blue trim and calipers.Dürheimer, R&D chief Willi Netuschil and Frank Bauer – the man who has driven faster than 400km/h more often than any other human – meticulously check these near-perfect mules, fiddling, fine-tuning and micro-adjusting. 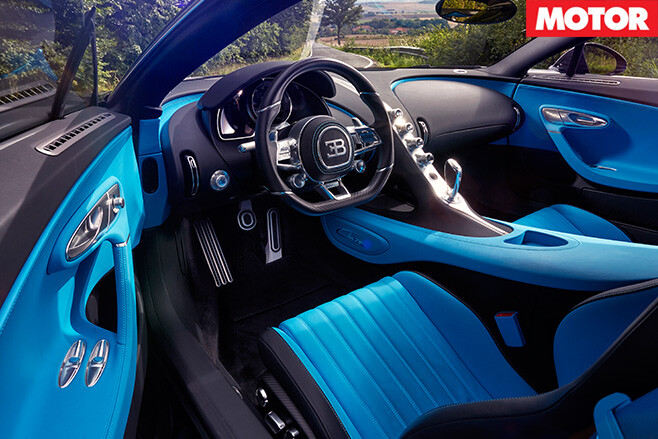 Most recently they decided on marginally cushier rebound in Autobahn mode, slightly more aggressive tip-in, and a smoother first-to-second upshift. Details, yet the eyes of these grown men shine.

“Speed is both absolute and relative,” Dürheimer says. “You must constantly readjust your eyes and brain. At 300km/h, reaction time and stopping distance are not like at 200km/h. At 400km/h you’re in a different realm and always out on a limb because other road users simply don’t expect the unexpected.”

Even so, the Chiron’s fast pedal parts the waves. A current 911 Turbo giving its very best has no chance – the Chiron claims 0-300km/h in 13.6sec – and the Bugatti scoots past.

At 2.5sec 0-100km/h the all-wheel drive 1995kg Bugatti is almost as quick as an F1 car; at 420km/h, it’s about 60km/h faster. Yet the Chiron happily potters around town in the least aggressive of its five modes – Lift, EB (Ettore Bugatti), Autobahn, Handling and Top Speed. 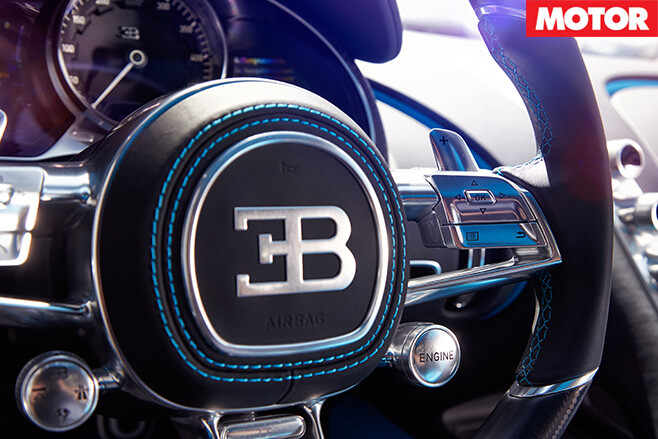 A Porsche-style rotary selector is on the steering wheel, with controls for infotainment and manual shifts. The screen to the left of the speedo displays data like revs, torque and fuel, while the right-hand one deals with sat-nav, music and phone. But as speed increases, the information narrows to rpm and km/h.

While there’s an amazing standard of finish and countless beautiful details, the concept has weaknesses – the electronics are partly carried over from the Veyron, so no head-up display and no serious driver assistance systems. On the plus side there’s now a small cargo hold for a 44-litre carry-on bag.

But the biggest drawback is the turning circle. “We tightened it a bit by tucking the nose in using the rear diff lock, but it’s a characteristic that takes some getting used to,” Netuschil admits. There are cameras and sensors to protect you but don’t underestimate the space it takes to swing from kerb to kerb. Unlike the Veyron’s monothematic exhaust note, the heavily revised 8.0-litre here has a fuller note and greater variation. The working noise is more a distant hum than an ever-present roar, and while it will happily entertain bystanders and their smartphones, the mid-engined mauler is surprisingly quiet inside.

What you do hear is a more intense full-throttle grumble from behind the firewall and the sudden swoosh of the air brake propping the drag figure from 0.38 (0.35 in top speed mode) to 0.59. Plus the background bass of hard-working tyres.

While an awesome straight-liner, the Veyron wasn’t friends with slow corners, undulations, patchy surfaces, the wet or the limits of adhesion in general. The Chiron – while even more impressive on acceleration – has notably better handling. 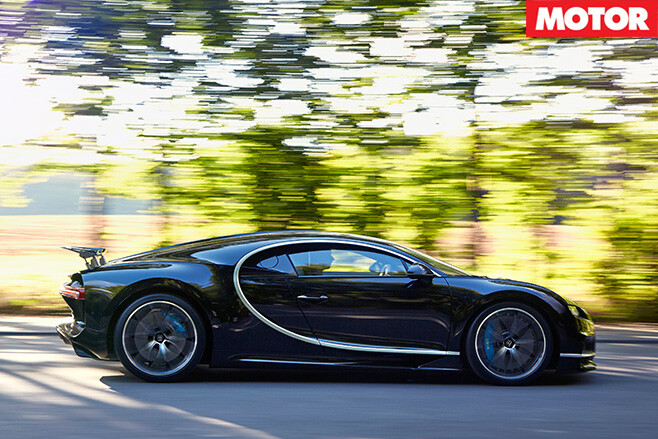 This is achieved with a steel and aluminium double-wishbone set-up featuring electronically-controlled diffs, active aero and new electro-hydraulic variable-effort and variable-rate steering. The new-for-Chiron carbonfibre monocoque is claimed to be as rigid as a Porsche LMP1 racer’s.

Aside from the massively more powerful engine, it’s this steering that makes all the difference. Adapting automatically to the chosen driving program, it’s quicker yet more progressively damped, and the feedback is authentic and direct.

“Are you ready for a couple of quick changes of direction?” Dürheimer asks, even though the speedo needle is close to 250km/h. A flick to the right – pause – flick to the left – pause. Repeat. Repeat. Repeat. The Chiron reacts as if it’s following a magnet – precise, flat, totally fuss-free. 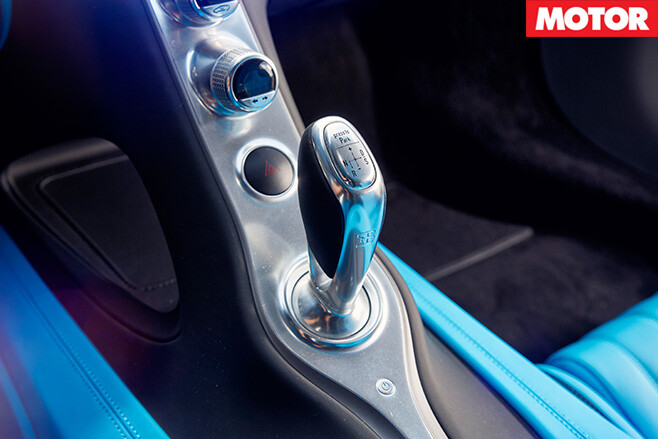 “Now let’s do this across three lanes.” We’re well below 200km/h now and Dürheimer turns more aggressively, holds the lock a little longer and sets the car straight again more affirmatively. G-forces are pulling our faces around but the Bugatti remains stuck to the line. No understeer, no oversteer, no comment. This is a new level of high-speed poise.

The speed limit at the Wolfsburg off-ramp is 40km/h. Overly cautious perhaps, but it does curl out of sight. Wolfgang clicks down to third and 120km/h, a smidgeon of lift-off, a nudge of the helm and he’s balancing the line between steering and throttle, leaving thin rubber marks down the exit ramp.

“On a track I use Handling set-up, which includes a drift feature,” he says. You can turn off the ESC – the switch is deep in the footwell, as in the Veyron. At our lunch stop, the Chiron is all sizzling exhausts, crackling brakes and gurgling coolant. With 1500 horses at work, heat is always an issue. “Under extreme conditions, the engine can create heat equalling over 3000bhp (2200kW),” Netuschil says. “We were facing a major conflict between ideal aerodynamics and thermal well-being. To solve this dilemma, we installed 10 radiators and coolers.”

The high-temperature circuit shifts 37 litres of liquid every three seconds, while a low-temp system holds 12 litres to cool intake air which is crucial for seamless stop-and-go driving. 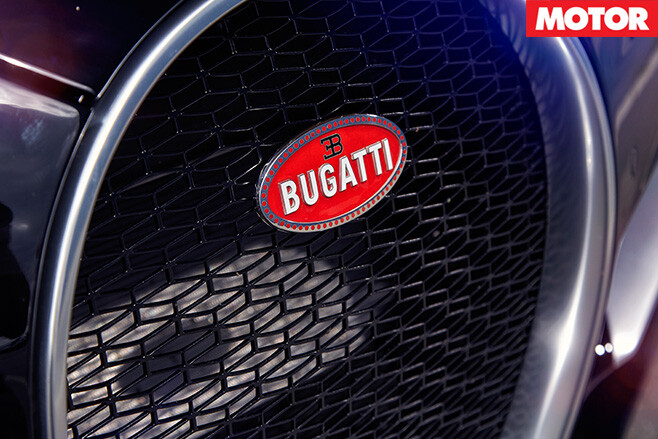 To improve brake cooling, a team member developed rotary shields featuring small blades to direct hot air away from the carbon-silicon-carbide discs while lateral air curtains generated by slats in the front apron pull hot air from the wheelhouses.

AP Racing all-aluminium eight- and six-piston calipers are ultra-lightweight; wider and larger-diameter rotors complete the list of braking changes. The weight distribution of 43:57 suggests a nicely composed handling balance. But the 1120kW and 1600Nm available in Handling mode have no trouble overwhelming everything.

To demonstrate, Wolfgang mashes the pedal from 50km/h in fourth and everything happens at once. There is a moment of hard acceleration squat and a whiff of front wheelspin before the front-to-rear Haldex clutch snarls twice and the rear differential briefly locks, making the Chiron shrug its broad shoulders; ASR and ESP added nudges and in the 6.5sec it takes a Golf GTi to sprint to 100km/h, this Bugatti hits 200km/h. 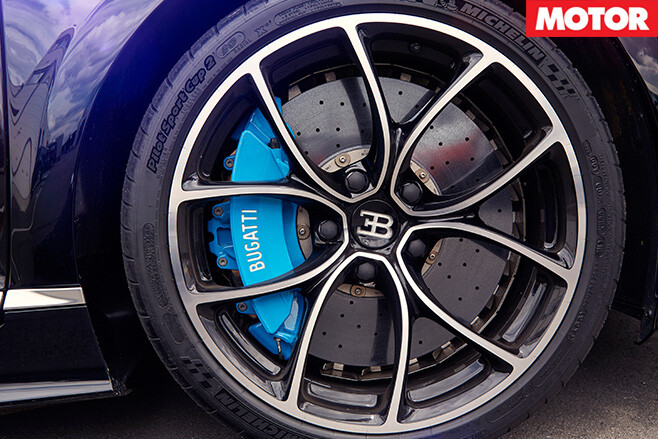 What else do you get for your money? The carbonfibre skin can be painted, lacquered or split 50:50. The ECU black box has space for future WiFi updates, and a set of the bespoke 285/30 R20 and 355/25 R21 Michelins that cost half as much as the previous generation – a steal at €$22K. The 155g nose emblem is enamel over silver and before you decide, you’ll be invited to look at 39 trim colours.

The Chiron boasts four ‘ambience settings’: Icon, Performance, Cruise and Classic. Seats can either be racer-rudimentary, sports or fully electric. The Accutron sound system is tuned to match your specific cabin surfaces, but a special tool is required to clean the outside of the rear window.

There are better-handling, more involving cars around. You may prefer ultralight and ultrasharp cornering heroes or rear-wheel drive slidemeisters. But the Chiron’s not even on the same planet as LaFerrari or the McLaren P1. 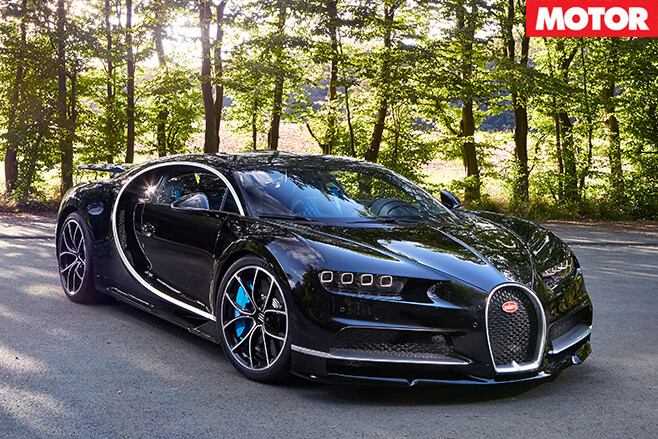 It’s all about speed beyond lesser machines, amazing confidence at the 380km/h permitted in Handling mode, steering precision that puts the blacktop in your palms, the ground-effect chassis and stunning brakes. Add style, refinement and exclusivity and it’s easy to see how every week a new owner takes the bait.