We get an early taste of Holden’s “cosmopolitan” four-door soon to join its small car line-up.

HOLDEN is preparing to flesh out its broadest small-car range in years with the forthcoming German-engineered, American-styled, Korean-built and Australian-tuned Holden Astra sedan.

WHAT IS IT?
Essentially the new-generation Holden Cruze (to be badged Astra in Australia, featuring its own front bumper and grille) at “65 percent IV [Integration Vehicle]” stage, meaning it’s covered in camouflage and is still undergoing calibration and fine-tuning prior to its May on-sale date.

WHY WE’RE TESTING IT?
Because Holden wants to trumpet its ongoing local design and tuning influence on global GM product. And because the Astra sedan is expected to be an important part of the nameplate’s overall success, soon to be bolstered by an Astra wagon and eventually by a new-generation GTC coupe.

MAIN RIVALS
A heap of small hatches and sedans from Australia’s biggest-selling category – the small-car class – though it’s the Toyota Corolla, Mazda 3, Hyundai i30/Hyundai Elantra and Volkswagen Golf that register most strongly on Holden’s salesnetwork radar. 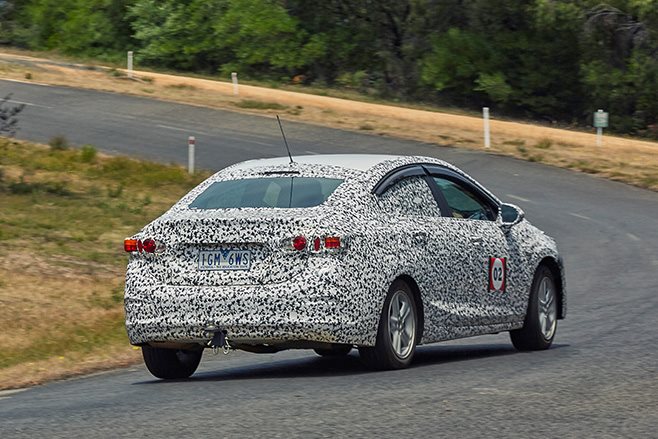 THE WHEELS VERDICT
An important and worthwhile addition to Holden’s burgeoning Astra line-up, destined to fill the gap left by the Adelaide-built Cruze four-door with its greater refinement, improved space and more interesting design. That said, if fashion is your thing, then the Opel-styled hatch fits the bill better than the Chevrolet-styled sedan, even though the more comfort-oriented four-door feels better suited to rough Aussie roads.

PLUS: Fluid dynamics; plusher ride than Astra hatch; competitive room; capable drivetrain; lower pricing than equivalent hatch models
MINUS: No autonomous emergy braking for Australia; won’t get the gutsier 1.6 turbo-petrol or any diesel engines; not quite the German-designed hatch’s equal for exterior and interior styling panache

THE WHEELS REVIEW
IT SEEMS Holden has finally learned from its mistakes of the past. In any other market, this stickered-up sedan would be wearing a Chevrolet bowtie and a Cruze bootlid badge, but come its official arrival in Aussie showrooms in May, this Korean-built four-door will become the Holden Astra sedan, bringing it into line with other D2-platformed Astra variants and creating Holden’s most cohesive small-car line-up in almost 15 years.

Not since the big-selling TS Astra of 1998-2005 has Holden been able to field a small-car range as broad and as competitive as its current line-up. Back in ’05, Aussies lapped up 34,218 Opel-sourced Astras, but once the sizzle vanished (sporting and convertible variants) and the low-rent, Daewoo-sourced Viva arrived to confuse customers, small-car buyers started to evacuate Holden showrooms. Just like they did in the ’80s when the original Nissan-sourced Astra made not a hint of visual sense alongside the Holden-built Gemini of the day. 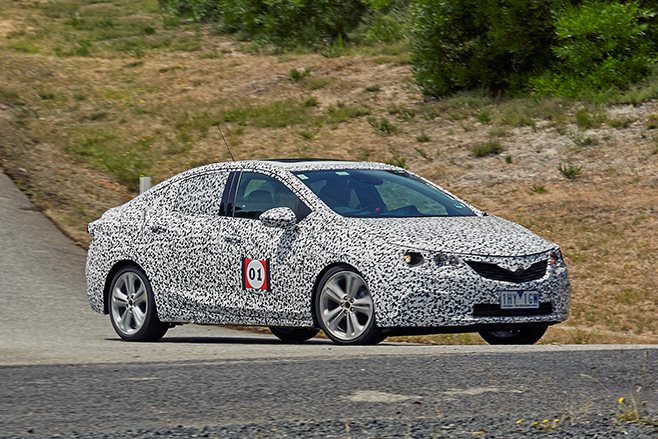 Not anymore. Despite this impending sedan’s obvious Chevrolet Cruze provenance, it’ll be badged Astra in Oz and will feature a unique Holden-styled front facia and grille, as well as the hatch’s mechanical layout, its dynamic DNA and many interior details. The US-styled sedan looks different to its German hatch relation, but to a much smaller degree than Hyundai’s similarly related Hyundai i30 hatch and Elantra sedan. The Astra four-door isn’t so obviously the budget-conscious, conservative-voting, God-fearing alternative.

Holden claims Australia will be the only market to receive both the sporty Astra hatch (and, soon, a wagon) as well as the more comfort-oriented Astra sedan, giving it a broader flavour spectrum than Chevrolet’s identical-bar-the-derriere Cruze hatch and sedan siblings.

GM’s Aussie outpost is also keen to play up its involvement in the new sedan’s chassis tune, one that has been standardised for all D2-platform sedans sold in the Middle East, South Africa, South-East Asia, and Asia Pacific.

While there’s definitely been an emphasis in making the sedan ride more comfortably than its sportier hatch alternative, Holden’s chassis engineers aimed to retain as much of the Astra hatch’s trademark handling excellence and steering crispness as possible.

Holden has modified the hatch’s steering calibration slightly for the sedan, in keeping with its more even ride/handling bias, and there’s been local input into the sedan’s ESC tune, torque-vectoring overlay, and trailer sway control. And as with the hatch, the new model’s D2 architecture achieves a weight loss of up to 120kg compared with its thick-limbed Cruze predecessor.

So how does Astra sedan drive? Given the camouflaged cars we’re having a strafe in – a lower-grade sedan (either base LS or mid-spec LT) wearing Hankook Kinergy 205/55R16s and a top-spec LTZ on Kumho Ecsta 225/40R18s – are “65 percent IV cars” (meaning Integration Vehicle, roughly 65 percent towards full sign-off), it’s impossible to say for sure, but the dynamic flavour is definitely there. 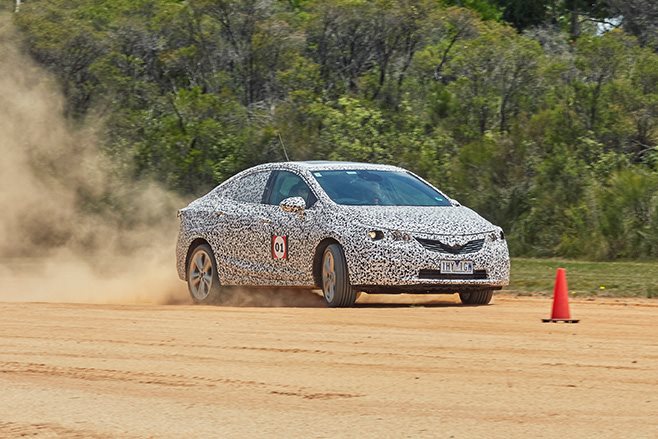 Around Lang Lang, you can sense the balance-enhancing goodness of the torsion-beam rear axle’s Watts linkage, even though one proto sedan is clearly closer to final suspension sign-off than the other (it rolls less and doesn’t lift-off oversteer as much). The four-door may hail from South Korea (rather than Europe), but it feels like an Astra should.

Out on the road, the drive impression is even more positive. A calmer, more absorbent ride – particularly wearing 16s – endows the sedan with a real dynamic point-of-difference over the almost aggressively sporty hatch, which will be appreciated by country buyers. And the LTZ’s 18-inch Kumhos seem to transmit less road noise than an RS-V hatch’s 18-inch Continentals.

Drivetrain-wise, the sedan range will be a one-size-fits-all proposition, relying solely on the gutsy, refined 110kW 1.4-litre direct-injection turbo-petrol four from the Astra R hatch. Base sedans will be available with a six-speed manual transmission (and 245Nm from 2000-4000rpm), while the top-spec LTZ will be six-speed auto only (channelling 240Nm from 2400-4800rpm).

Disappointingly for sedan fans, there will be no sporting replacements for the old Cruze SRi and SRi-V 1.6 turbo variants, though with the new car’s sizeable weight loss, the 1.4T delivers slightly stronger performance, a broader working range and much-improved refinement.

About the only thing missing from the auto sedan are steering wheel paddles and a dedicated sport mode, though Holden’s transmission calibration and the 1.4T’s strong torque manage to make most enthusiastic cornering situations reasonably effective when leaving the tranny in D. 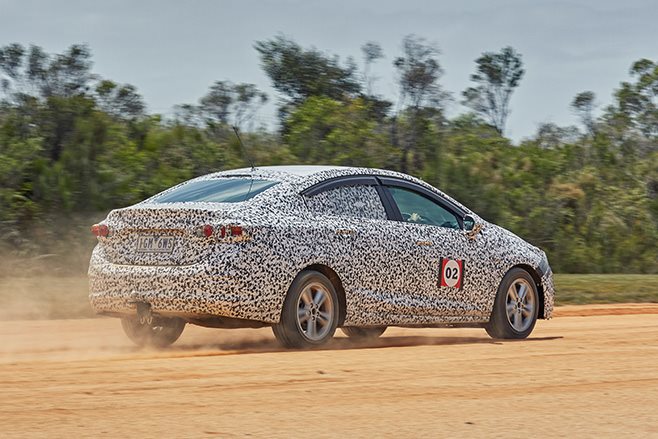 More concerning is the Astra sedan’s lack of Autonomous Emergency Braking (AEB), even as an option, though the LT and LTZ will offer a forward distance indicator and collision alert, lane-keep assist, blind-spot alert, self parking, front parking sensors and automatic wipers, as well as the rear parking sensors and rear camera fitted to the base LS.

Yet despite the lack of AEB, Holden is expecting a five-star result when ANCAP crash-tests the Astra sedan.

Holden is also promising slightly cheaper pricing for each sedan variant relative to its hatch equivalent. At base level, that means the Astra LS manual sedan should undercut the $21,990 manual Astra R hatch, while the automatic LT and LTZ sedans will sit below their more powerful $27,240 RS auto and $31,740 RS-V auto hatchback stablemates.

With a German-designed Astra wagon also on the way, as well as new-gen GTC Coupe further down the track, Holden is secretly hoping its vast Astra line-up will pick up some of the sales volume slack when it loses the rear-drive V8s that still make up 30 percent of its Commodore mix.

But at least this time it has a consistent nameplate. And even if GM flogs Opel to the French (Peugeot-Citroen) that won’t change the destiny of the Chevrolet Cruze, I mean Holden Astra, sedan. 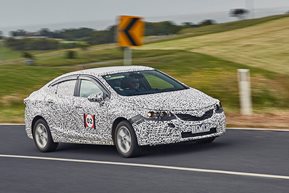