NOW, AS far as tunnels go, the ‘Hochtor’ on the Grossglockner High Alpine Road is fairly unremarkable.

It’s only a bit over 300 metres long, so you don’t even need to have entered it to apply the old cliche about seeing light at the end.

It was built, as were the other 48 kilometres of this sublime road straddling the eastern Alps between northern Italy and Austria, by toiling Austrian workers back in the early 1930s. It’s stood sentinel to a world war, economic collapse, recovery, and monumental changes to both the people and vehicles that pass through it.

Overhead, its arched ceiling bears the weight of millions of tonnes of earth and shale, and come winter, a crushing blanket of snow and ice.

There’s so much to ignite the senses on the mighty Grossglockner that to single out this tunnel may seem a bit abstruse. But stay with me, because something unique happened in there: I uttered an involuntary expletive about a Korean car that was not generated by disappointment or frustration. Instead, it was a ‘holy s__t!’ spontaneously ejected through sheer, shocked elation. We were doing that thing that never gets old in a performance car: the old windows-down-in-the-tunnel with wide-open-throttle trick.

I had the Hyundai i30 N pinned at the top of second gear, its eager, rorty 2.0-litre turbo engine delivering every last one of its 202 kilowatts near the 6700rpm limiter. Sooner than I anticipated, it seemed prudent to lift, as low fog shrouded the tunnel’s exit in a white veil. As the throttle snapped shut, the ECU did its trick of allowing a trace of fuel to pass into the hot exhaust, and the vapour’s ignition delivered a couple of supercar-loud, rapid-fire bangs that ricocheted like gunfire off that tunnel’s damp, grimy walls.

It was an exhaust noise no other hot hatch delivers, and to stretch a metaphor, no half-arsed warning shot across the bows of the car companies that have dominated this segment for the last decade or so. No, this was the sound of a declaration of open warfare.

Hyundai’s N division high-performance debutante had hit the open road, and the automotive world as we knew it shifted, just a little. 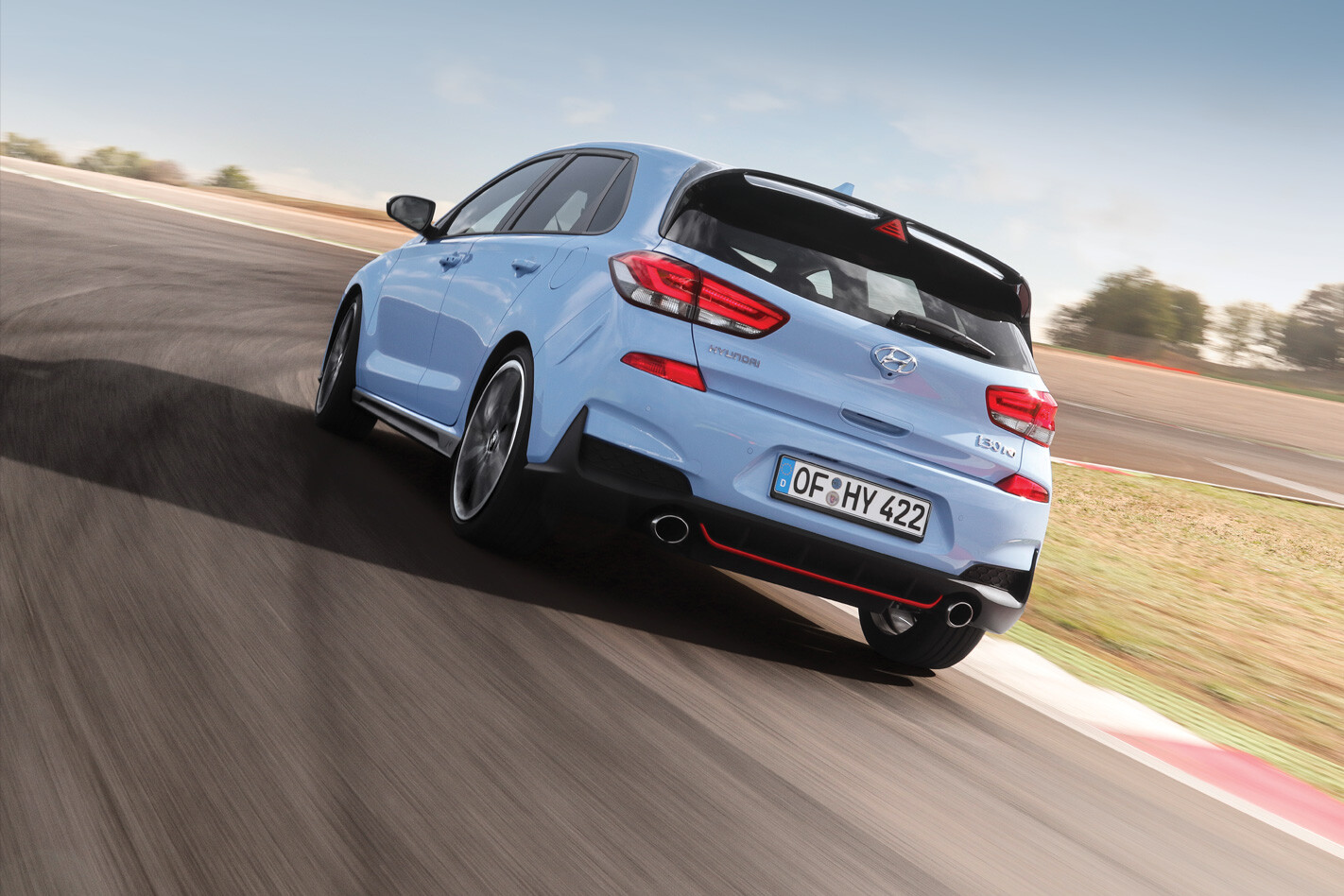 TO BACKTRACK for a moment, our first taste of the production i30 N comes near Rome, en route to the Vallelunga circuit on the ancient city’s outskirts.

It will become increasingly evident over the next few days that the Performance Pack is worth the extra spend.

It doesn’t just deliver a more satisfying sonic repertoire and a bit of extra top-end punch over the 184kW base model, it also has a clear dynamic advantage thanks to the electronically controlled (but hydraulically actuated) limited slip differential, leaving the regular i30 N to make do with torque vectoring by brake to control front-end traction under a heavy throttle. Trust us, you want the e-LSD. It makes a real difference to the way the car powers down and exits a turn when driving hard, and also keeps the steering free of a slight layer of torque steer and corruption that can affect the base car when you’re spanking it or the roads are wet.

Where the base car counters is with its more modest 18-inch wheels and 225/45R18 Michelin tyre package, which delivers a subtle but noticeable improvement in ride quality on rough and sharp-edged stuff compared to the Performance Pack car on its 235/40R19 Pirelli P Zero tyres.

Let’s see how the 19-inch package copes with Aussie roads, but even in the dampers’ comfort mode, it’s unapologetically firm in the hills above Rome; occasionally jarring. Both versions deliver abundant levels of grip, although ultimately the 19-inch Pirellis will hang on with a bit more tenacity.

Our time on the circuit is a chance to stick the Performance Pack version in its N-mode, which sets all the driver-adjustable parameters – throttle mapping, steering weight, damper stiffness, ESC setting, diff calibration and exhaust – to their most aggressive and performance focused. (And yes, all these can be individually configured into your own custom setting.) First impressions are that the steering (now with rack- mounted assistance, rather than column-mounted) has real deftness just off centre, allowing you intuitive turn-in, and a confident connection with the tyres in fast, open bends. 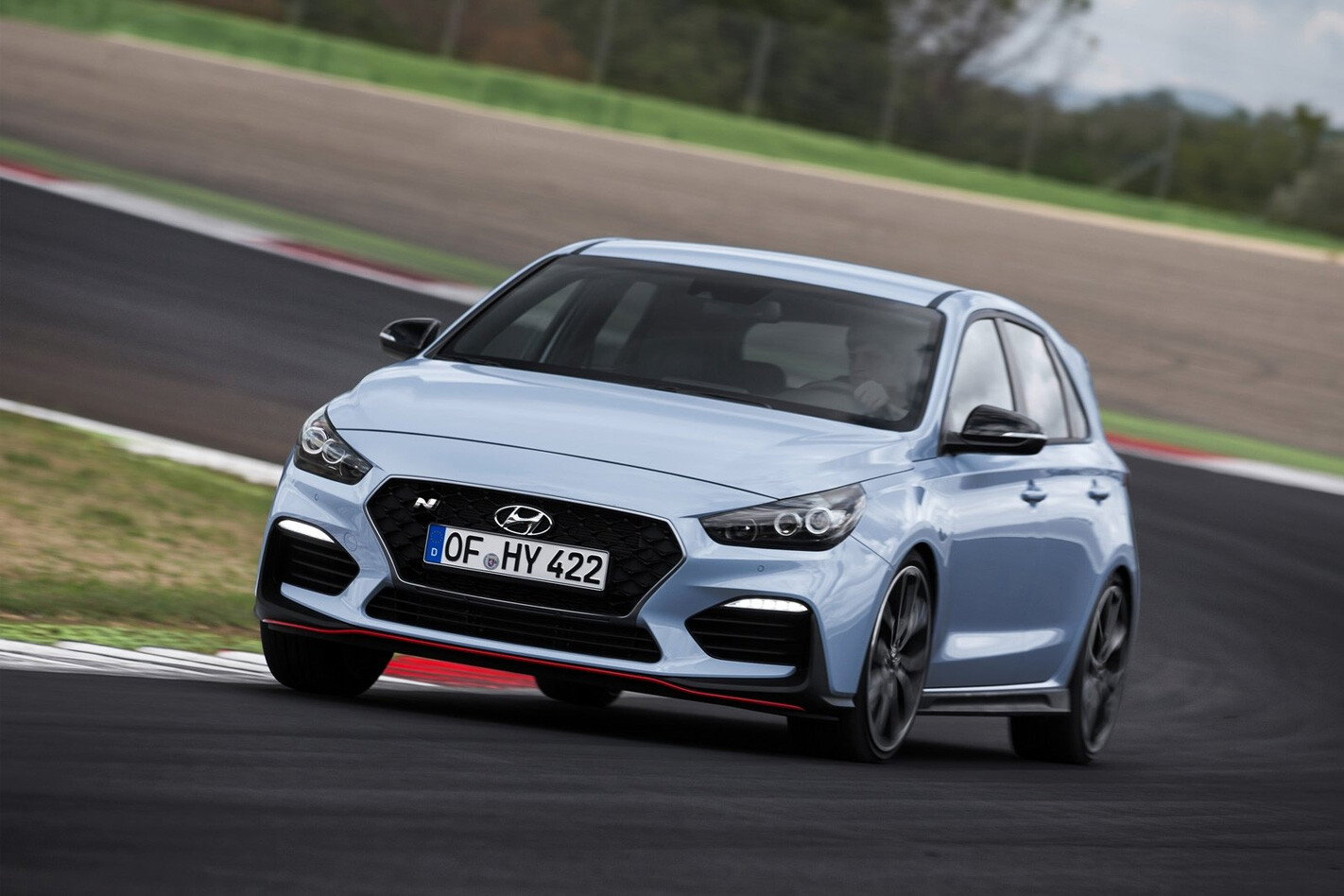 In the tighter stuff, there is throttle adjustability to a degree, but the set-up feels very neutral – maybe too neutral for keen drivers who like a front-drive car with a really engaged rear end that will pivot on a lifted throttle when the front end runs out of grip. But overall, the car’s stability under brakes, and the way it shares the load between front and rear contact patches in response to your throttle inputs, is all hard to fault. And thanks to that e-diff, power-down ability is properly sorted; the moment you’re post-apex, those front treads can just about always take a full squeeze.

It’s early days to be making a call, but after several laps I’m left feeling the i30 N hangs on more manfully in hard driving than a regular Golf GTI does, which can wilt pretty quickly when really punished on a track. But how will it compare as a road car?

THE ITALIAN autostradas that take us north toward the Grossglockner prove that the i30 N has got seriously sorted high-speed manners.

The roads here have a 130km/h limit and point-to-point cameras, but no-one seems to heed them, and this is the country that coined the “when in Rome…” expression, so we don’t hold back. Around 160-170km/h feels a real sweet spot given moderate traffic, but in more sparse sections, the car feels utterly planted and confidence inspiring at over 200km/h. 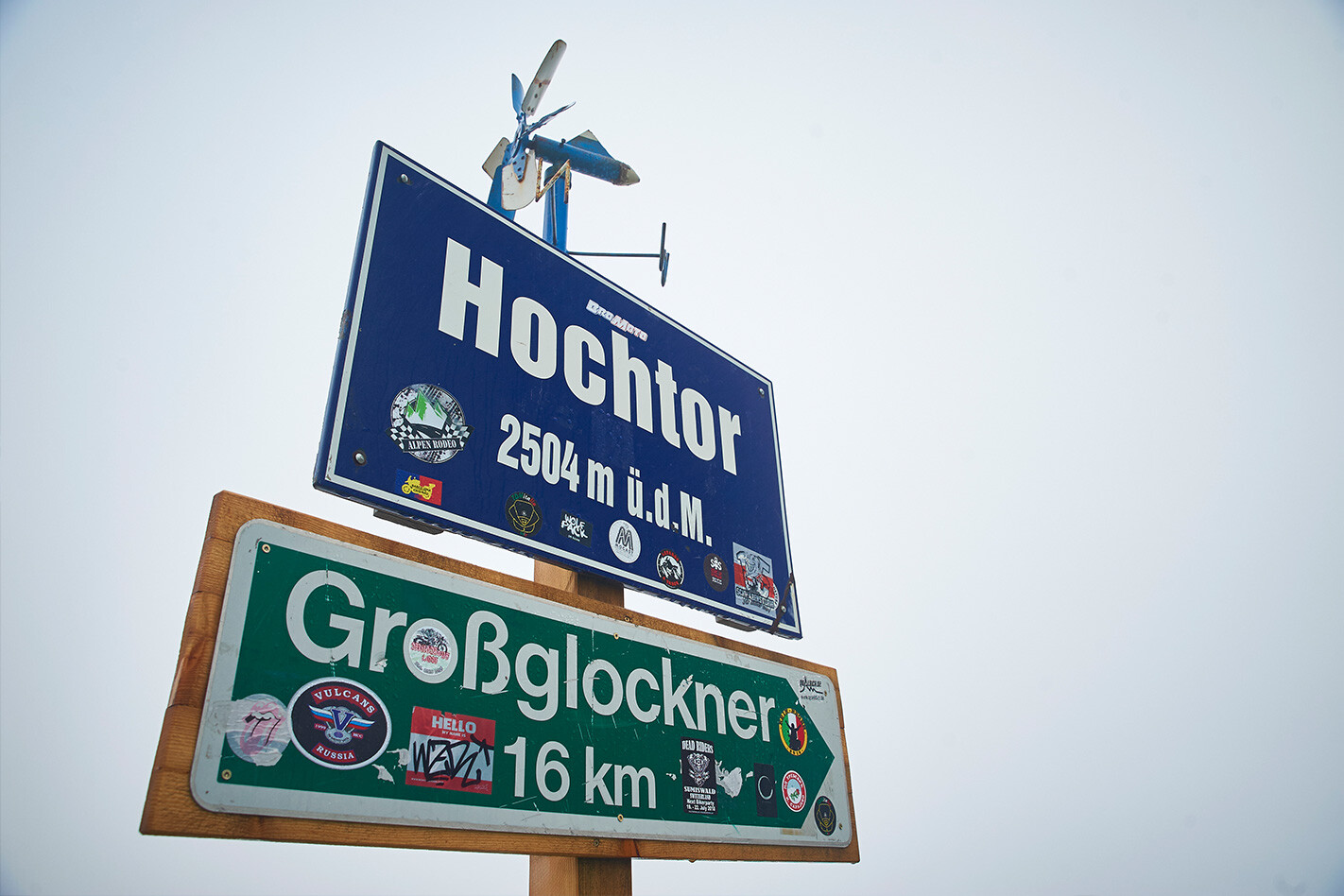 The engine has real flexibility and barely perceptible lag; okay, it doesn’t have real venom in the top end, but it’s strong and willing to the point of peak power at 6000rpm, with headroom to 6700rpm.

Our fuel burn sits in the low teens, a fill of the 50 litre tank costing around €80, (A$120) but small compensation comes via the excellent coffee from the ubiquitous Autogrill servos/rest stops; just €1 and delivering a more effective jolt than most recreational drugs sold on the streets of Sydney. Or so I’m told.

I COULD bore you rigid with stats and facts about the Grossglockner, but here’s the most salient point: unlike just about every other high road that passes over the Alps, the Gross was not built for the efficient passage of people, armies, or trade. It was built for recreation; a magnificent ribbon of infrastructure intended to attract visitors to the area and showcase the spectacular scenery and the Hohe Tauern National Park it dissects. The Gross is to roads what the Sydney Opera House is to music and arts: a place for pleasure and fulfilment, not merely transportation.

It’s a toll road, which is actually a bonus for keen drivers, as it tends to dissuade travellers in lumbering campervans and backpackers in clapped-out Skodas; those types seek out the free routes over the Alps. The tollgate attendant on the southern side, Ursula, takes our €35 (A$53) with a smile, hands us some brochures that detail the other attractions, like hiking trails, an Alpine ecology museum and the not-to-be missed marmot show, involving cute rodents, er, being cute rodents. Maybe another time, Ursula, because right now we have Albert Biermann’s baby gassed up, and gaggin’ for a thrashin’.

Okay, on that: given the absence of police and zero enforcement of the 100km/h limit, you could almost think of the Grossglockner as a racetrack to the clouds. It’s tempting to just cut sick like Mike Tyson on a Vegas bender, but one little detail tempers that urge: the fact that you can end up very dead at this place.

In July 2015, two young Englishmen went over the edge high on the northern descent, leaving their Seat Leon Cupra, when it was finally recovered, looking like a blob of chewing gum picked off your shoe.

I’m reminded of the Sherpa people of Nepal, who revere Mount Everest as Chomolungma; or ‘Mother of the World”. You do not want to climb all over her when she’s cranky, and likewise you don’t take liberties with the Gross. You want a car here that delivers detailed feedback; one that drip-feeds confidence so you can attack, but with prudence. The i30 N delivers. The bitumen here is so glassy, the car actually gels in its N mode, with everything, including the suspension, set to its most aggressive, although I prefer the steering in its lighter mode. The front-end has both feel and purchase; you can rail around the wide hairpins pouring on more throttle until the Pirellis are singing at a pitch that says ‘extended’, not tortured.

Then there’s the rev-matching function. In my dreams I am to heel-and-toe downshifts what Michael Jackson was to moonwalking, but the reality here is my limited brainpower and coordination is being drained by picking braking points, nailing the occasional apex and not looking over the edge.

The shift action from the six-speed manual (an eight-speed dual-clutch is still around two years away) is terrific, with short throws and a super-positive gate feel. The rev-matching function brings a welcome flurry of revs that smooths out the downchanges as the lever almost feels magnetically sucked into each gate.

But really, you could drive a steam-powered Trabant on this road and still feel elation. The corners are cambered with a radius and precision that borders on fine art; they remind me of the racetracks I used to make in our backyard sandpit as a kid. And in places where the road could logically continue its ascent, it sometimes doesn’t, instead diving down a saddle in the mountain just to extend out and wrap around another spectacular vantage point, opening out to a landscape that is in parts both brutal and beautiful. 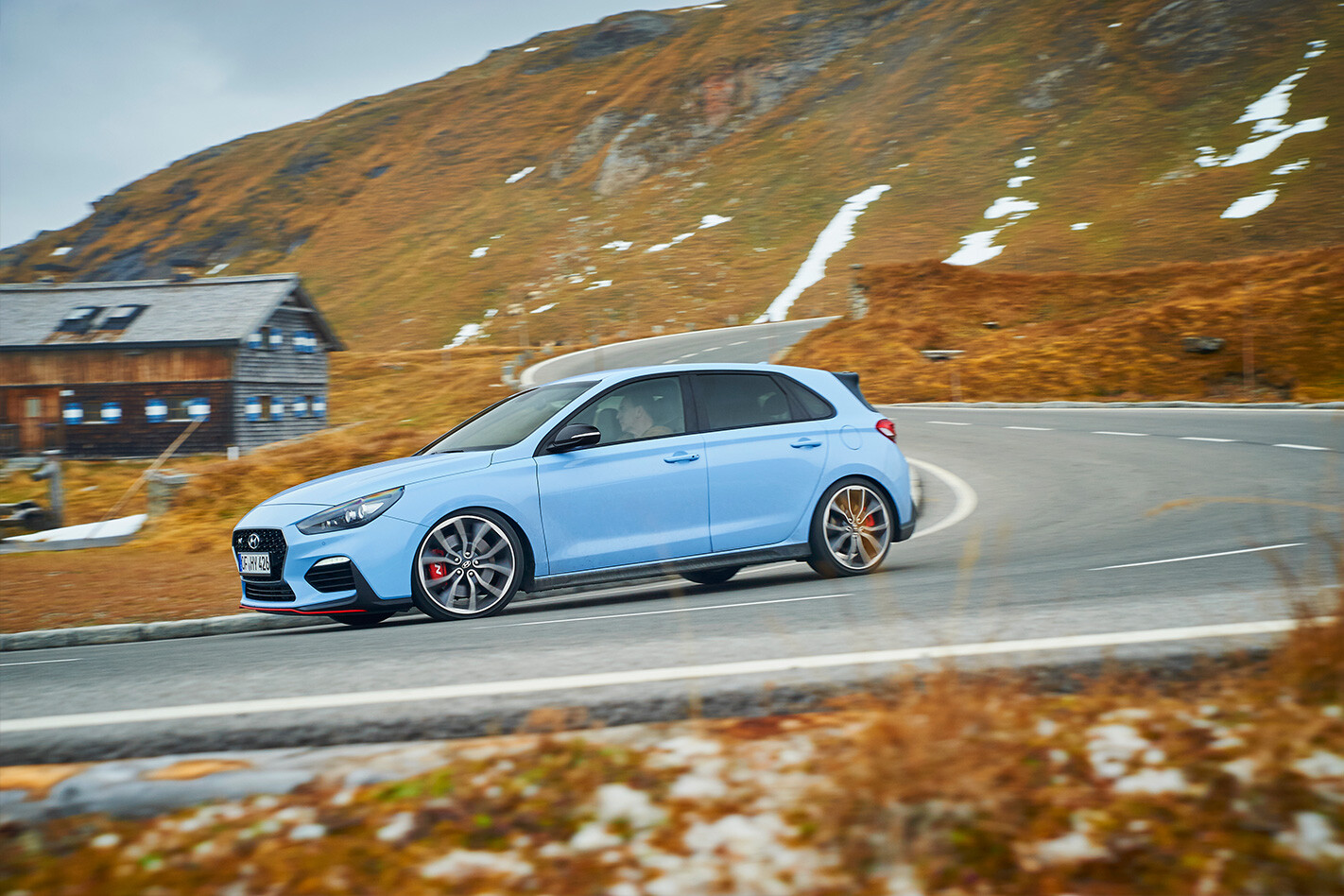 The sense of freedom when driving here really does make your spirit soar. It’s not just the lack of enforcement; the ability to be trusted as a semi-rational adult to make your own decisions about where to have a proper crack and where to ease back.

It’s as much in the fact that everyone else here appears to respect you as a car enthusiast indulging in your passion. There’s no fist-shaking or scowling; just knowing nods as you howl past. Slower drivers use the turn-out bays to let you past.

The i30 N is the product of a true car-guy, and it’s an unalloyed joy to be able to fully extend it in an environment that embraces that passion.

At the road’s highest point, the 2571m Edelweiss-Spitze, we give ourselves and the brakes a breather, and take a moment to soak it all in. 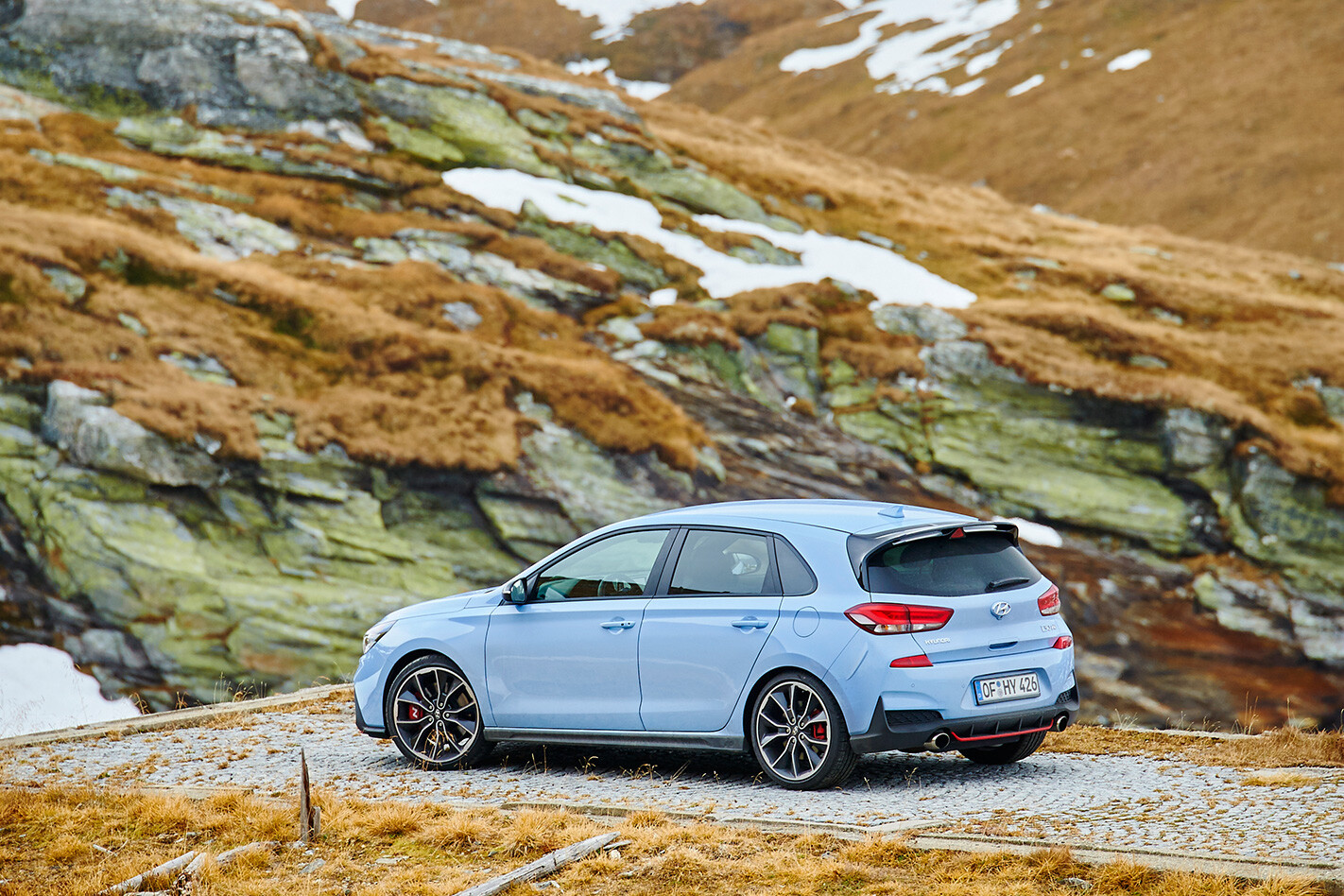 The mighty Grossglockner, the range’s largest mountain at nearly 3800m, towers above the region, and throws a forboding shadow over the adjacent Pasterze glacier.

The weather is turning. In just a few weeks, heavy snow will blanket the region and the toll gates will be boarded up, not to reopen until May.

By then Hyundai’s first-ever N division car will have been on sale in Oz for around four months, and we’ll have a reading on just how well the Koreans are scaling their own mountain.