The venerable Land Rover Discovery continues to posh up but remains a premium off-roader – though we’re none the wiser about how it travels on bitumen.

The venerable Disco continues to posh up but remains a premium off-roader – though we’re none the wiser about how it travels on bitumen.

WHAT IS IT?
The fourth-generation Land Rover Discovery is a very different beast from its predecessors, with a move upmarket making it closer to being a three-row Range Rover than a utilitarian off-road hauler. Our drive in a prototype was limited to an off-road course, which the Discovery conquered with near-effortless disdain. The unanswered question, for now at least, is how it will cope when asked to perform in the real world.

WHY WE'RE TESTING IT
The Land Rover brand has been getting posher for years, with the Discovery being the latest product of this creeping “Range Rover-ization”. It sits on the same aluminium platform as the current Range Rover and Range Rover Sport and therefore benefits from substantial weight saving over its pudgy predecessor, with the diet resulting in a significant increase in performance. It’s bigger and more practical than the last Discovery as well, with its optional three-row layout particularly well suited to Australian tastes. 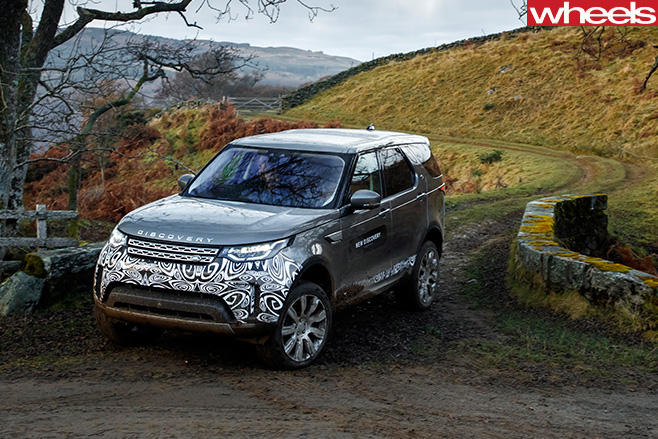 THE WHEELS VERDICT
We’re not going to attempt a definitive take after a drive that didn’t take in a metre of tarmac, but we’ve still seen enough of the new Discovery to be broadly impressed. The design lacks the utilitarian charm of its predecessors, but under the mostly generic styling is a well-engineered and practical SUV that combines three-row usefulness (and magic folding seats) with a welcome improvement in material quality and ergonomic design. It’s mighty when asked to deal with low-speed off-roading, now we just need to find out how it copes with sealed surfaces.

THE WHEELS REVIEW
This definitely isn’t going to be a definitive review, or even a sketchy one. JLR seems to love introducing new models in environments seemingly chosen to prevent journos from gathering anything more than the most rudimentary dynamic impressions. In the case of the new Land Rover Discovery that meant on a private estate in Scotland, big enough to accommodate a three-hour drive without leaving mud or gravel. My peak speed was a dizzying 30km/h and the full road test will have to wait until we have access to an actual road. 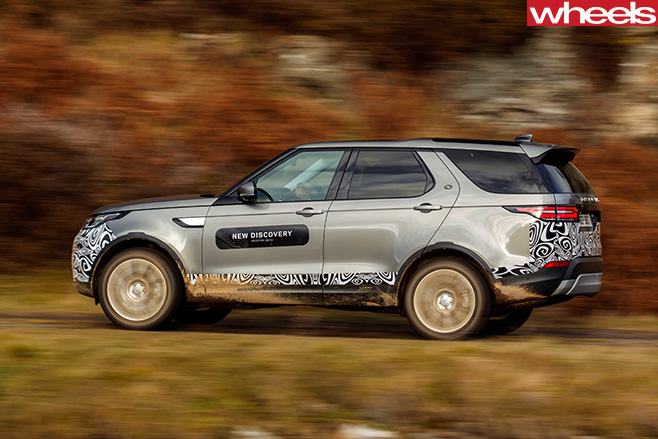 There’s still plenty to say about the new Discovery, which marks a new step in what could be termed the Range Rover-isation of the Land Rover brand. Although best known for utility models like the Defender, which finally died earlier this year, these days the company sells far more of its luxury models and the new Discovery has been shoved upmarket to take the fight to chinzy rivals including the Audi Q7 and new Volvo XC90.

It sits on the same PLA platform as the Range Rover and Range Rover Sport, meaning a switch to aluminium construction, and will be constructed alongside its posher sisters and JLR’s Solihull plant in the UK (also later in the company’s new factory in Slovakia.)

The change in emphasis is obvious in the styling, with the new Disco moving far away from the slab-sided styling of its predecessors to take on much of the Range Rover’s design language. 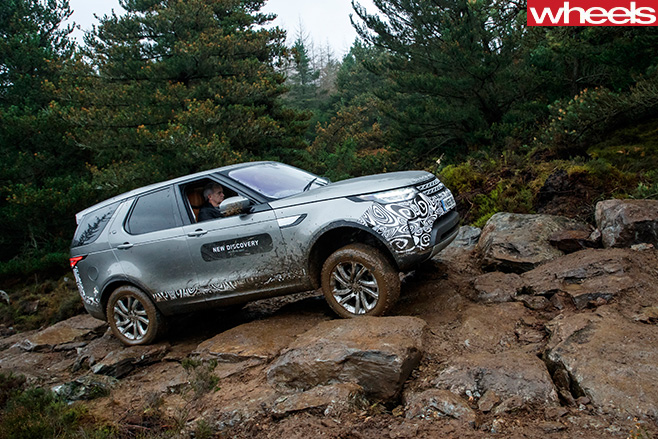 The curves make it look less practical than before, but that’s an optical illusion. At 4970mm in length, it’s 140mm longer than its predecessor, and just 29mm shorter than the Range Rover. Nor is it lower, the 1888mm overall height actually makes it 1mm taller than the last Discovery.

For the most part the styling is generic lifestyle SUV, but the tailgate features an offset license plate mount that’s presumably designed to make us think of the stepped glass on previous Discos. This looks awkward, certainly with a big UK licence plate filling the space.

The cabin is good. Material quality feels a magnitude better than the previous Discovery, with Land Rover promising generous standard equipment in all markets. The Disco uses conventional instruments (shared with the Discovery Sport) rather than the full VDU panel of the Range Rover, but in every other regard it feels close to its snootier sisters in terms of fit and finish. 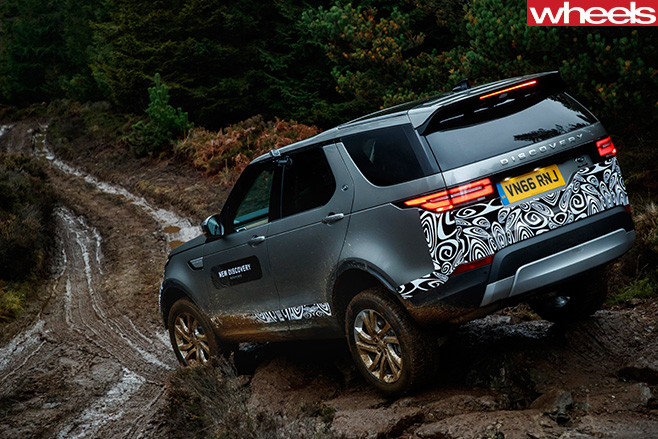 There’s plenty of space in the front two rows, with the power operated third-row seating (which may well be standard in Australia) motoring itself out of the boot floor when required to do so. (As tends to be the way these days there’s even an app, to allow you to reconfigure the seating plan when you’re not even with the car, though I’m not quite sure why you’d want to.)

Land Rover’s claims the rear seats are adult sized would require finding some flexible and uncomplaining adults, but it’s certainly bigger in the rear than the Discovery Sport or “5+2” Range Rover Sport.

Engine choice reflects the Discovery’s mid-range position in the Land Rover league. It doesn’t get the option of a V8, instead having a carried-over 250kW supercharged petrol V6 and three turbodiesels – a 2.0-litre four-pot from JLR’s new “Ingenium” family in either 132kW or 177kW states of tune, and a 190kW V6. 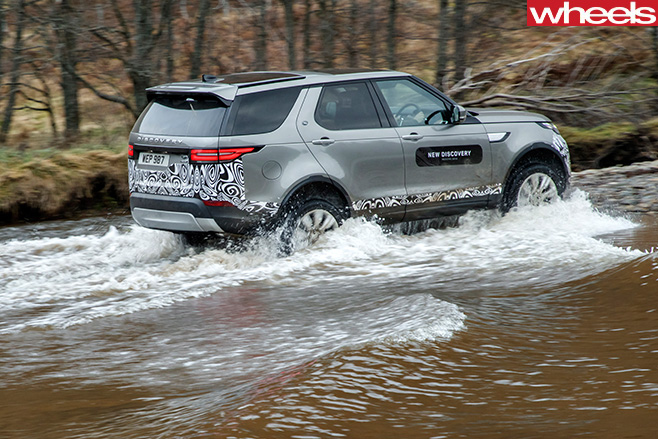 We don’t know which of these will be coming to Australia, but the two V6s look like the safe bet with JLR execs suggesting the four-cylinder will struggle to justify its existence outside Europe.

The switch to the aluminium platform has resulted in some impressive weight saving – the new Discovery is 500 kg lighter than its predecessor spec-for-spec – and on the official performance figures the petrol V6 will be the quickest Discovery yet, with a claimed 7.1-sec 0-100km/h time.

Not that I got a chance to confirm that. Indeed, thanks to the gentle pace that Land Rover insists off-roading is conducted at I barely got either the V6 petrol or V6 diesel that I drove into third gear. 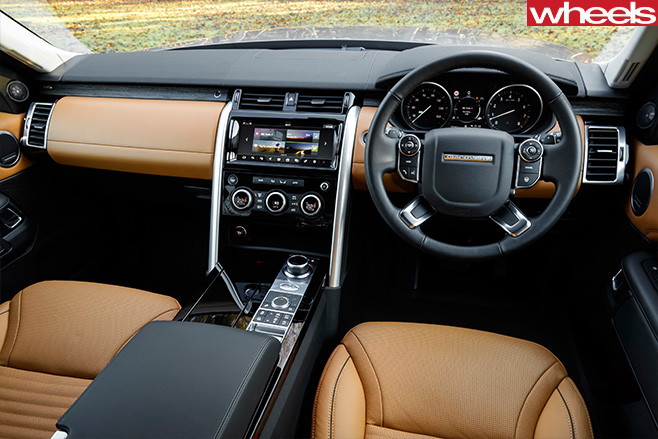 The Discovery’s battery of driver aids make it impressively unstoppable in the sort of boggy terrain it seems to have been designed to conquer. It even has a ‘progress control’ system which basically acts as an off-road cruise control, maintaining a chosen speed pretty much regardless of what’s underfoot and the optional air springs can raise the Disco high enough to allow 700mm of wading depth.

An eight-speed autobox is standard, but Land Rover is making the two-speed transfer box an option for the first time. The uptake of low-range gears will be a good indication of how many Discoveries are being bought to actually tackle the wilderness.

At such low speeds, it was even hard to discern much difference between the two engines. The petrol sounds nicer and punches harder when asked to do so, but it surges enough to make it difficult to maintain ultra-low speeds. The diesel’s flat-everywhere torque curve seemed ideally suited for chugging through the scenic wilderness that is the Atholl estate in the Highlands. I can’t honestly say anything about ride, steering response or refinement, except that – even at the lowest speeds – the new Discovery feels obviously lighter than its gargantuan predecessor. 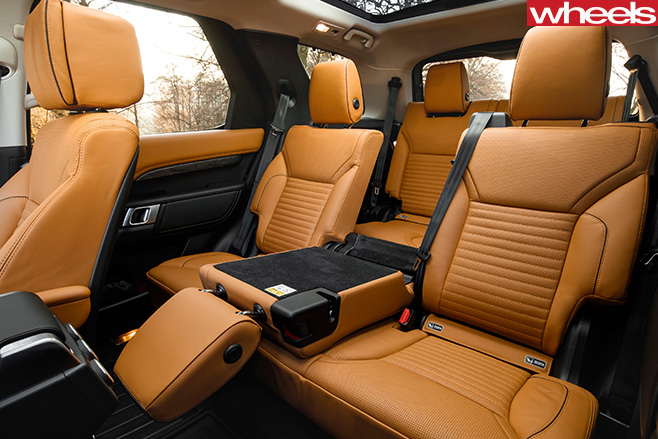 While we don’t have details on Australian pricing, we’ve been told that the new Discovery will be cheaper than its predecessor in most markets, with more equipment as standard.

It certainly feels plusher and posher than the last version and can still manage a fairly serious off-road challenge, albeit one that’s a fair bit removed from a trip to the Outback.

The big unanswered question is whether it can get close to the car-like ride and refinement of its premium rivals on road.