Well before Mazda’s second-gen CX-5 arrived in Australia, we headed stateside for an exclusive first taste

“WILL this damned drought ever break?”

It’s the water cooler topic de jour as we mill about the second-gen Mazda CX-5 at its North American media preview in pretty, if parched, San Diego. Such talk isn’t only about the prevailing conditions.

Parallels exist between the lack of rain falling on the Southern Californian plains for much of this decade and the Japanese medium-sized SUV’s intermittent North American fortunes, making this southern California launch venue an interesting coincidence. Or is it?

Sales globally have flooded in for the CX-5 since launching in late 2011, almost singlehandedly saving Mazda’s bacon. But not in the US. 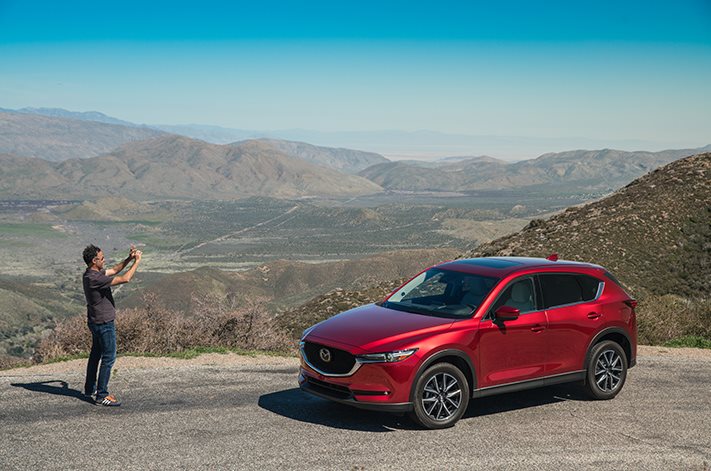 While North America is still the model’s biggest market with 112,000 sales last year, it represents little more than a trickle against the leading Honda CR-V’s 357,000-odd torrent, relegating the Mazda to a disappointing 19th on the US SUV sales chart. Behind even the decrepit Jeep Patriot. And barely ahead of the premium Lexus RX…

The latter fact is telling, and ultimately instructive as to understanding why the not-so all-new KF-series Mazda CX-5 looks, feels and behaves like it does. If the first couldn’t crack the big time against mainstream dross in the world’s second-largest car market, offering a palpably better and slightly more upmarket alternative might turn the trickle into a stream.

The CX-5’s Australian track record clearly served as inspiration. As the SUV to rule them all for the last four years, Aussies couldn’t get enough of the CX-5, and happily paid the premium for money-spinning luxo grades. Only one in four buyers picked the povvo Maxx, so the Japanese-built midsizer swum in a richer-than-usual model mix pool for its class.

Yet we at Wheels weren’t quite as sold on the old CX-5. 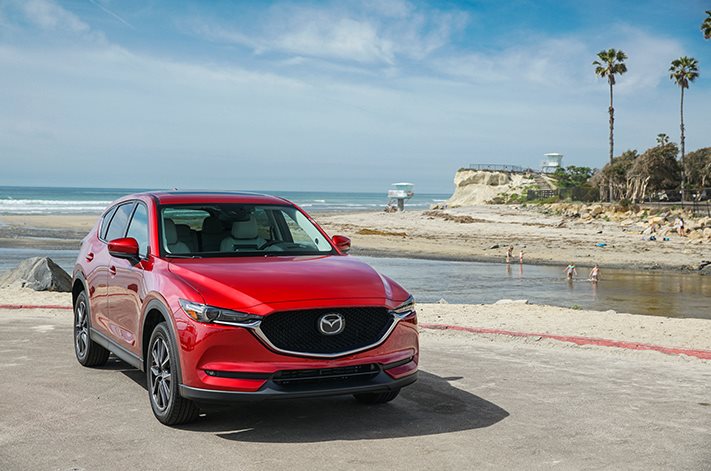 In theory, then, refining the breed should only enhance the newcomer’s popularity on both sides of the Pacific. That’s what has totally informed the CX-5’s evolutionary design.

The new-gen KF’s deliberately more sober styling is either blandly amorphous after the angular playfulness of the foxy KE, or way more sophisticated. Whatever your pick, there is a maturity to the detailing that only really manifests in the metal. 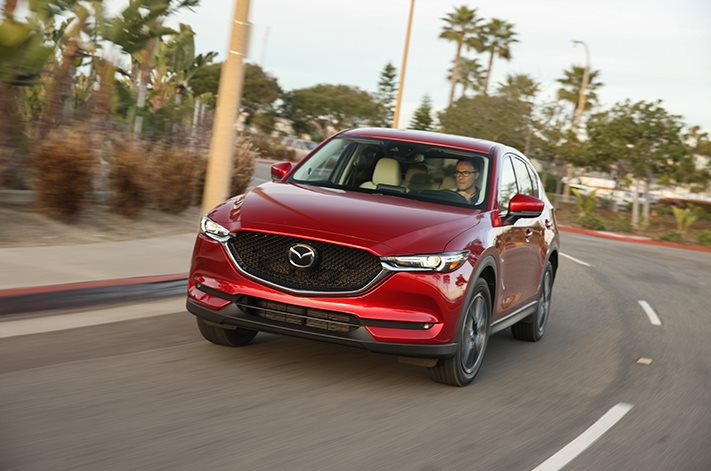 The obvious visual connection with the latest CX-9 that was styled about a year earlier also somehow enhances the new CX-5’s elegance.

The influence of Mazda’s 2017 Wheels Car of the Year-winning seven-seat SUV is also pretty much evident inside the CX-5’s tear-it-up-and-start-again cabin, and not just because of the shared dashboard theme of low horizontal lines and an Audi-like centre console, now higher and wider.

Along with the expected lift in quality and an abundance of more tactile trim, there’s nice attention to detail. Metallic-like matte surfaces resist grubby fingerprints; posh French stitching processes have been introduced; and the hard plastics that most Asian carmakers don’t bother hiding are now either carpeted or covered in softer materials. 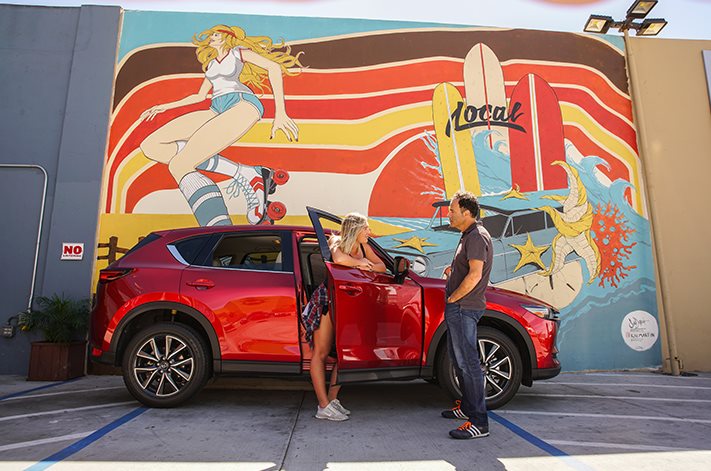 Completely revamped seating, which is part of a holistic, almost fanatical approach to driver/vehicle interfacing, also figured strongly during this CX-5’s 28-month gestation in Japan. And look! The back doors open at a much wider angle. Just like in the better Euro SUVs, the rear seat backrests now split 40:20:40 and offer a two-step reclining mechanism, while a lower cushion is said to be more child-friendly. And, finally, rear central air vents arrive. Combine this with deeper windows for better vision and the old CX-5’s slightly claustrophobic back row is history. Boot capacity grows by 39 litres (now 442 litres), and can be accessed via a tailgate that includes a powered option.

They may be small steps perhaps, but they’re effective in boosting ambience and desirability. It’s also handy when you’re cross-shopping against, say, a Volkswagen Tiguan in a dealership in Delaware or Dandenong. 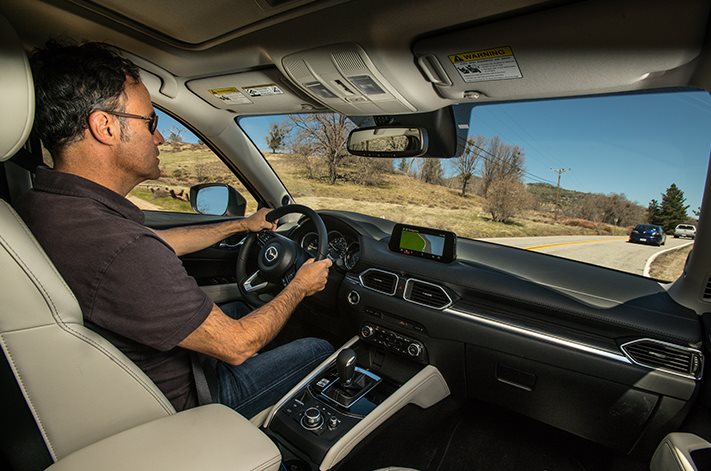 But rest assured, trad CX-5 fans: the carryover 2700mm wheelbase means that interior space remains competitive for four adults; most of the switchgear and controls are easy to fathom and operate (though a few buttons are randomly scattered); there is a veritable plethora of storage options; and the climate control system is super-effective, as we discovered over more than 1000 kilometres beneath that hot Southern Californian sun.

The Golden State might rank as the world’s sixth largest economy, but the greater San Diego county and beyond certainly throw up a disparate selection of roads for us to traverse. The dead-straight freeways are infamous in the US, as are the super-smooth concreted slabs bisecting endless rows of palm tree-lined middle class suburbs. But the sweeping, flowing mountain byways are a pleasant surprise heading north along Highway 79, while the narrow crumbling bitumen mountain roads with huge potholes and deceptive cambers pepper the south as if waiting to punish inferior suspension systems. 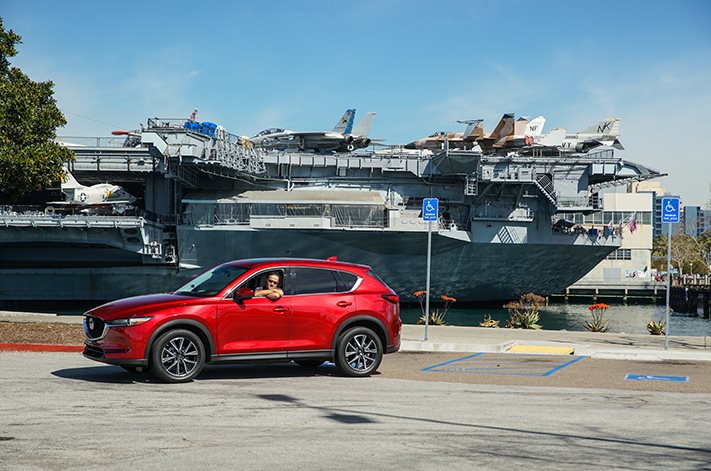 Here the infrastructure is as Third World as you’d like. Heavily armed Mexican border cops patrol barren, semi-arid regions where it appears little has changed over the course of various US administrations.

Core parts of the CX-5 haven’t changed, either, with the fundamental SkyActiv-branded four-cylinder and six-speed transmissions, available all-wheel-drive system, MacPherson strut-style front and multi-link rear suspension layout, and other major platform parts carrying over with really only minor changes. 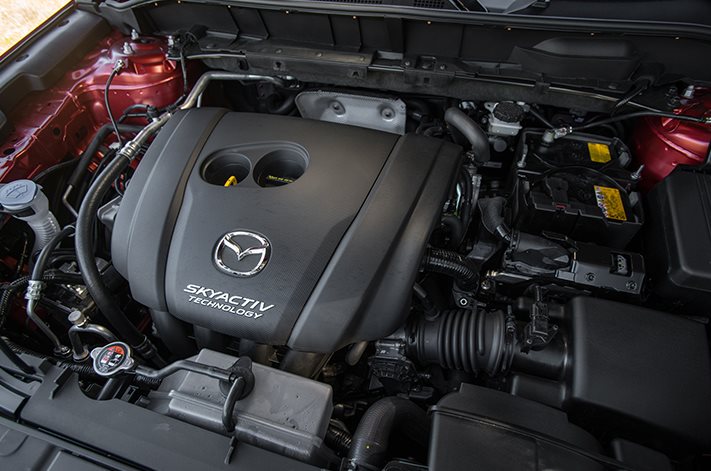 Perhaps disappointingly for some, weight rises – around 40kg – but engineering chief Masaya Kodama insists the penalty of the extra mass was inevitable in the face of improved functionality (such as the more versatile rear seats and increased driver-assist tech that collectively add 5kg), crash safety (another 5kg), more opulent cabin fittings (that’s 10kg more), and refinement/dynamic performance (sound deadening and 15 percent rise in torsional rigidity come at a 20kg cost).

Back in San Diego, the only combo at launch was the 140kW/251Nm 2.5-litre petrol, driving all four wheels via a six-speed torque converter automatic. That’s the most popular combo in Oz, by the way. More efficient combustion processes and reduced airflow resistance due to less drag result in better real-world responses and fuel economy, though the former’s meagre 2kW/1Nm gain and latter’s 1.0L/100km rise respectively aren’t worth crowing about. Those extra kilos can’t help…

Whatever, the fact is the larger of the two petrol engines (the base 114kW/200Nm 2.0L continues) doesn’t seem at all disadvantaged by the inferior power-to-weight ratio. Though tipping the scales at 1670kg or thereabouts, the GT 2.5 AWD scoots off the line quickly, keenly and cleanly, aided by a torquey mid-range and an eagerness to rev to the 6000rpm limit. That now-familiar direct injection atmo induction noise adds a sporty spirit to the CX-5’s urge, backed up by the receptive yet refined transmission. Even on the poor American 91RON unleaded – it’s all we could find out in the National Park near Julian – the bigger-engined Mazda’s trademark muscle flexed itself nicely.

So the medium SUV’s inherent driveability remains much the same as before. However, the edges in every sense of the word have smoothed out, if not softened. If you’re familiar with the outgoing model, that pleasing sporty tactility translates through, but in a noticeably more civilised manner.

According to Mazda North America vehicle development engineer Dave Coleman: “Our biggest goal was not to screw anything up.” 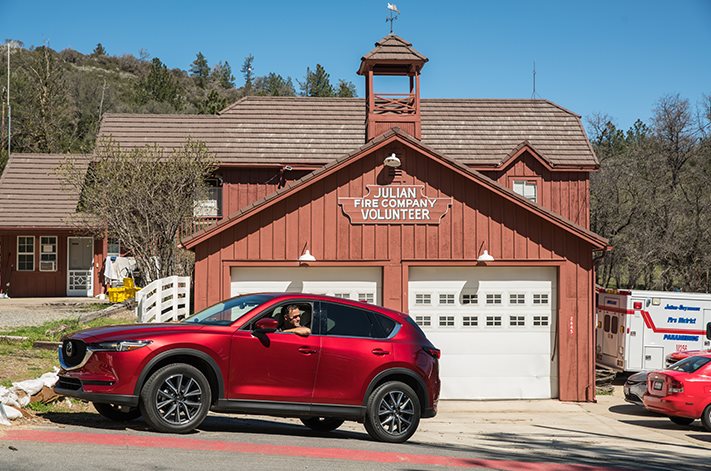 The fundamental chassis changes involved softer suspension settings offset by so-called “smarter” tuning so as to not degrade dynamic aptitude. Different dampers, bespoke springs, repositioned and more effective bushings; that sort of thing. Development was centred in Japan, with testing in California and Germany to tailor to unique US and EU tastes. Aussie CX-5s use the latter, but with small modifications, and is now regarded as a fourth chassis variation.

Our GT flagship obviously boasted the sharper US component set (including 225/55R19 all-weather tyres) for more adroit low-speed steering response. Yet considering the wide variety of road surfaces encountered, this CX-5’s consistently high-grade uniformity and linearity sure left its mark on us.

Flowing, connected, and natural steering feel, assisted by planted roadholding, feels close to class best in terms of dynamic personality. The suspension soaks up bumps with quiet aplomb, to the point where we rechecked our tyre sizes. Yesiree; 19s.

That inevitably leads to the core of the latest Mazda CX-5’s progress – its victory over road and tyre noise. Intensive sound deadening treatments, combined with an almost obsessive purge of noise/vibration/harshness pathways (see below), fix the previous model’s biggest ills in a single fell swoop. Welcome to CX-9 junior. 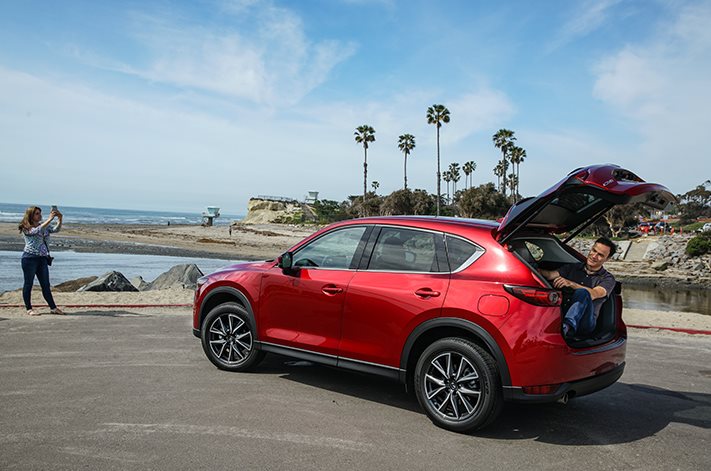 Yes, while the US chassis and road conditions make it hard to be categorical, we’d be surprised if CX-5 doesn’t go from below-par to class-best for refinement. Better than the Kuga/Escape, better than Tiguan. And certainly better than most premium Euro SUVs of this size.

“We’ve knocked down the sound level difference between front and back by about half,” Coleman declared. The company reckons the new car is quieter at 100km/h than the old one at 80.

Driving back towards LAX, first along the Interstate 15 and then up on the I105, terrible traffic delays force a long detour that pushed our mileage well beyond 1000km. They force us to skip planned coffee and lunch breaks to catch our flight. 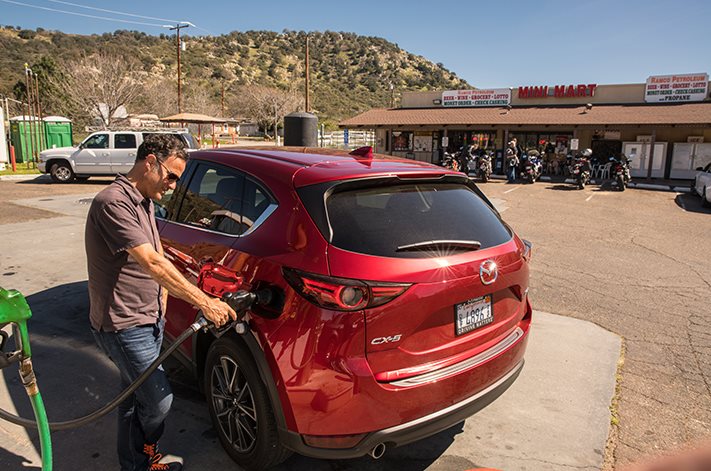 In its previous iteration, nerves might have been frayed. But the hushed, plush new-gen CX-5 literally keep the peace. Less-adventurous design aside, Hiroshima’s mid-sized SUV finally fully deserves its Aussie success. And judging by the talk back in San Diego, this is the model to finally bring Mazda’s long-overdue deluge of buyers in the States. That’d be one drought broken then. Bring on the other.

The Mazda CX-5’s steering rack is now mounted on a solid subframe instead of rubber bushings “for way more rigidity at higher G forces,” according to Mazda engineer Dave Coleman. Then there’s the fresh traction-enhancing G-Vectoring Control tech first seen in the updated 3 and 6 last year that varies the amount of torque loading on the front wheels for smoother cornering. Lower-friction front struts allow for increased controlled movement without having to reduce damping forces. New fluid-filled control arm bushings better quell vibrations. And unique left- and right-hand springs better resist side loads over bumps. 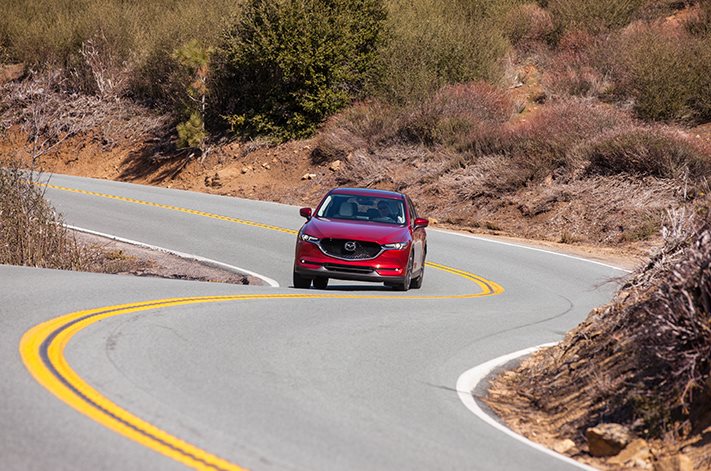 Chief designer Shinichi Isayama started work on the second-gen CX-5 in Hiroshima in 2014, with input from Mazda’s US studio. Influences included the 2013 Jaguar F-Pace concept, seen in the nose and concave mesh insert in the newly widened grille.

A 10mm increase in length, combined with a 30mm fall in height, slightly more cab-backward silhouette (the less acutely angled and thinner A-pillars move 35mm rearwards) and lowered stance help improve proportions, while a straighter beltline and more rounded wheelarches aim to infuse more sophistication to the original’s overt playfulness. Circular LED tail-light elements are meant to evoke the 1989 MX-5. 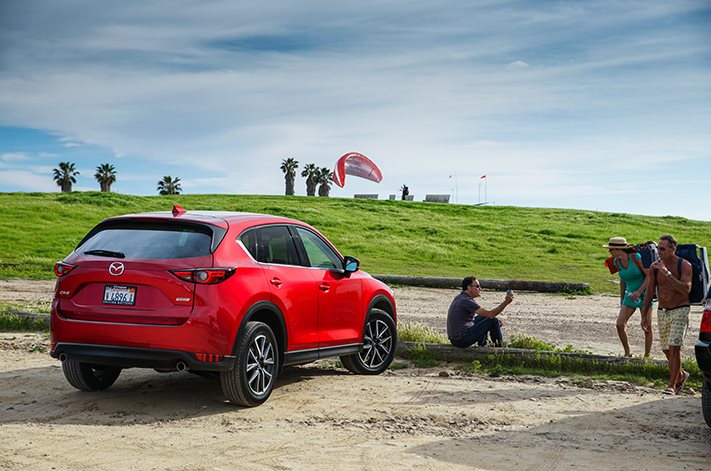 Mazda made the new CX-5 quieter through reprofiled windscreen wipers, using three instead of two seals where possible, adding seals where there were none (such as between the roof and tailgate), devising lids for the cargo floor storage cubbies, carpeting the wheel arches and centre tunnel, fitting acoustic front side glass and a thicker windscreen, reshaping the A-pillars and door mirrors, going for tighter-fitting panels, closing off extractor vent noise pathways, filling B- and C-pillars as well as door panel and hatch blanks with insulation, adding tighter fitting window channels, using a more aero-efficient and felt-lined under-tray, creating quieter suspension components, putting dynamic dampers on the rear subframe, and employing more sound-absorbent headlining.

Nothing to it, really. 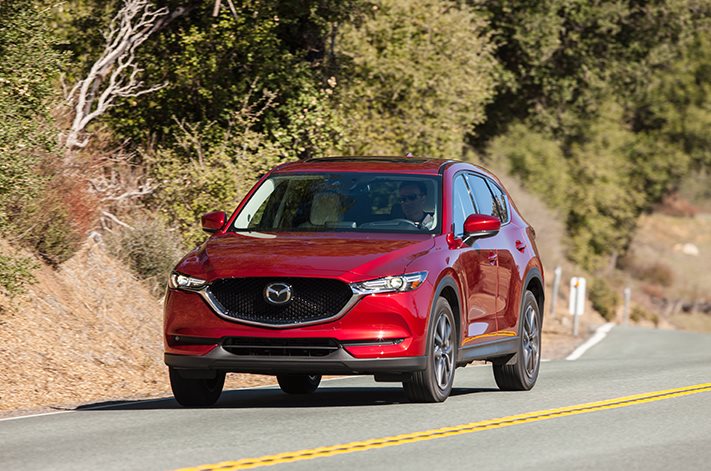