Sky’s the limit; as not much else will hold you back.

WHAT IS IT?
The convertible-roof variant of the Mercedes-AMG C63 S Coupe, so in terms of price, the new flagship of the C-Class range.

WHY WERE TESTING IT
Any opportunity to get behind any variant of Mercedes-AMG’s brilliant 4.0-litre twin-turbo V8 is to be jumped at. But we really wanted to see how much the extra weight and slight loss of rigidity affects the performance of this model compared to the sensational C63 S Coupe. 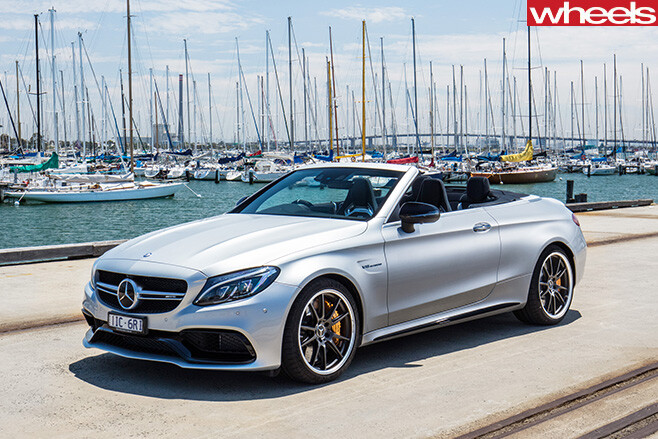 RIVALS
With Audi’s RS5 Cabriolet in hiatus until the new model arrives in Europe later this year, it really only leaves BMW’s M4 Convertible, in either regular or Competition guises, as a direct alternative to this AMG. The latter is around $15K cheaper at $165,615, but is down two cylinders, makes less power and torque, and lacks the C63 S’s wonderful V8 soundtrack.

THE WHEELS VERDICT
No question this is a superb 2+2 performance car, however, there is a slight paradox in taking the most focused, hardcore variant in a model range and saddling it with more weight and less rigidity. For buyers happy to take this trade-off in return for fresh air, sunshine, and even better connection with the mighty 4.0-litre twin-turbo V8, we won’t argue. If you’re less concerned with chasing the last gasp of ballistic performance, you may find a better fit with the C43 Cabrio, and pocketing the $60K difference. 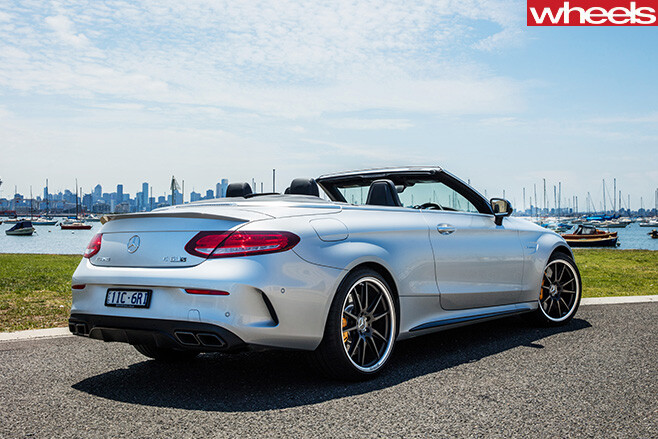 THE WHEELS REVIEW
Back in a previous era – pre-dating ‘alternative facts’, post truth, and well before comb-overs ruled the world – pointing to the ‘flagship’ of any automotive model range was simple: it was the fastest, most expensive variant on offer.

These days, the water surrounding ‘flagships’ is a little murkier. Are we talking about the fastest? Or the most expensive? If it’s the latter, then you’re looking at the current pinnacle of the Mercedes-AMG C-Class range: the C63 S Cabriolet. For the buyer who asks to be pointed to the ‘best’ C-Class in the showroom, then $179,900 says this is it. It’s nearly 18K more expensive than the Coupe, and its roof retracts in 20 seconds at up to 50km/h. And speaking of comb-overs, the C63 S Cabrio will do its damndest to keep one intact, providing the very best Mercedes can engineer in terms of open-top airflow management. Granted, if you go for a probe of the top speed – not quoted, but the Coupe is reportedly good for 290km/h, so let’s call it 275km/h – you may end up looking like you’ve had a bit of budget Thai botox. But at around the speed that most Aussie customers won’t exceed on public roads, the cabin turbulence is more a light, playful zephyr, with little impact on conversation or enjoyment of the excellent Burmester audio system.

But back to the original quandary: the C63 Cabrio is not the performance flagship of the C-Class range. That title still very much belongs to the Coupe, which retains a noticeable stiffness advantage and, significantly, appreciably more handling precision, thanks to a 125kg weight advantage. Those extra kegs knock the Cabrio’s 0-100km/h sprint back by 0.2sec; Mercedes claiming 4.1sec against the Coupe’s 3.9sec. 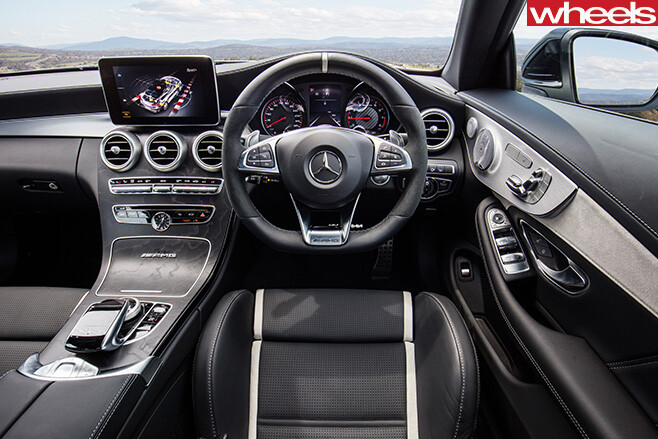 And while we’re trading numbers, here are two that no C63 S Cabrio buyer will give a flying buttress about, but we’ll share them anyway: the Cabrio will officially drink an extra 0.7L/100km (now 9.4L/100km) over the Coupe, but expect real-world consumption closer to mid-teens. More relevant may be the reduced luggage space with the roof open: it’s carry-on or soft gym bags only in the boot; suitcases will need the rear seat. Roof up, boot space remans the same as the Coupe.

But it’s really the perennial cabrio-roof engineering hurdles that the C 63 S attempts to leap that hold it back from greatness. This AMG model gets only the stiffening and bracing measures applied to the other three models in the cabrio line-up, and Aussie roads are still capable of delivering a shake-up that can ruffle it just a little. 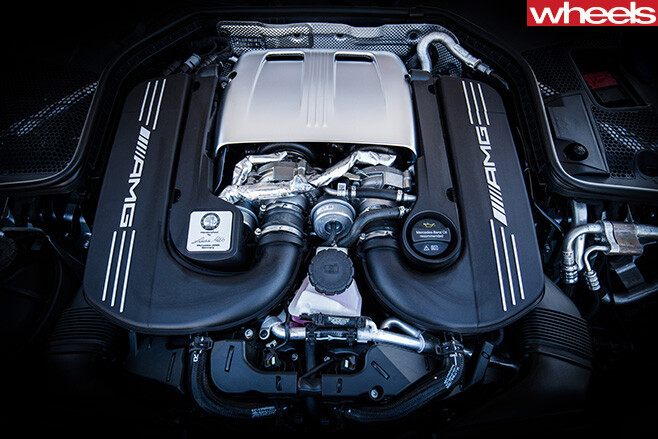 First you notice the slight tremors in the rearview mirror; higher speed and bigger hits can make the header-rail quiver. Not a big deal, but not helped by the fact the Cabrio runs identical damper settings – read, very firm – to the Coupe. That means the comfort mode is decidedly, unrelentingly sporty, and the Sport+ and Race modes are like denim stapled to hardwood.

But the ‘alternative’ facts are these: this is still a relentlessly rapid performance car with a twin-turbo streetfighter’s heart. Knock yourself out.