More than just a two-door version of the C63 AMG sedan, the Coupe has a unique platform that better takes advantage of its glorious twin-turbo V8.

WHAT IS IT?
Mercedes-Benz’s answer to the BMW M4 and Audi RS5. It’s also the fastest, most focused C-Class ever produced. The basic silhouette is shared with the regular C two-doors, but the footprint is broader for more stable high-speed dynamics.

WHY WE’RE TESTING IT
This is our first Australian wheel-time in the new C63 AMG Coupe, which was available for a few hot laps at Sydney Motorsport Park. MAIN RIVALS
BMW M3, Audi RS5, Lexus RC F. At a stretch you could throw the Ford Mustang GT (heck, make it two…) into the mix, too.

THE WHEELS VERDICT
It’s the most accomplished C yet and the Coupe brings new-found cornering confidence to the C63 AMG equation. More than ever, the choice between the C63 Coupe and sedan will come down to a lot more than practicality.

PLUS: Wider footprint makes for more attentive handling; glorious V8; elegant interior
MINUS: Heavier than the four-door; not convinced about the look from the rear THE WHEELS REVIEW
Every second counts. Or, in the case of the Mercedes-AMG C63, every tenth of a second.

Because a single tenth is the difference in the claimed 0-100km/h time for Benz’s new C63 S Coupe compared with its four-door sibling. The triple-figure target comes up in 3.9 seconds, compared with 4.0 seconds for the four-door.

A miniscule difference, but an important one in an era when bragging rights count – and when shaving anything off the acceleration time of one of the quickest sub-$200K cars on the market can mean masses of kilowatts and lots more money. 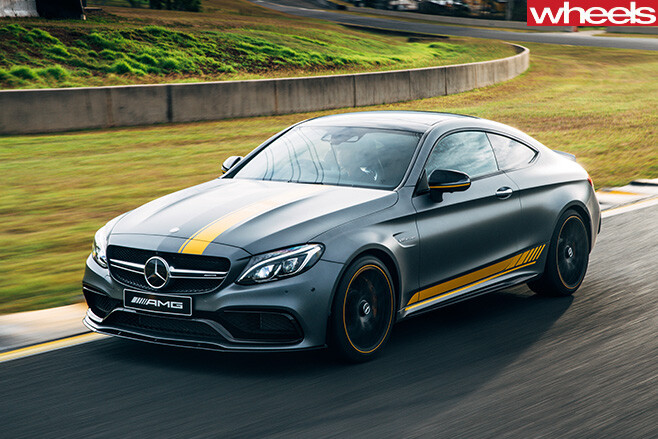 Even more impressive is that extra enthusiasm comes despite a 70kg weight penalty, due to the heavier Coupe’s body. At 1725kg, it ain’t light.

So put its perkier punch down to rubber. There’s more tyre and each is splayed further apart. Up front the difference is minimal; the Coupe’s 255mm-wide 19s are a mere 10mm wider than those of the sedan. But out back the C Coupe comes with massive 285mm 20s, which are 20mm wider and an inch up in diameter on the four-door.

Our first local taste test of the C Coupe was at Sydney’s Eastern Creek track (or Sydney Motorsport Park). And it’s the revised suspension geometry of the Coupe that is most obvious the moment you tip into a bend. The front wheels sit 48mm further apart that those in the sedan, the rears 22mm. 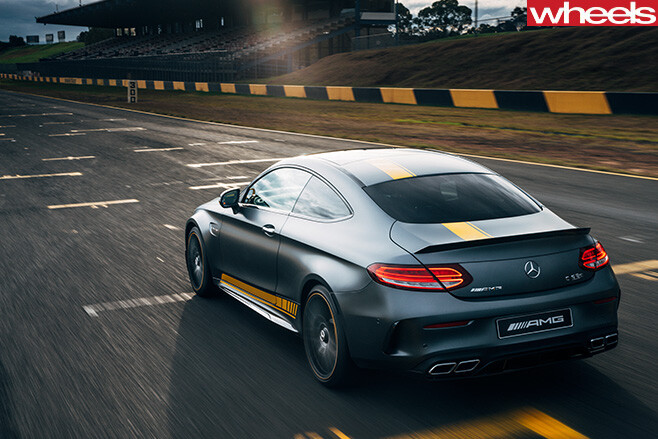 The nose will still understeer if you dive into a slow corner too fast, but get the balance right and send some V8 goodness south and there’s a noticeably more planted feel to its on-the-limit demeanour. Through fast corners the C is equal parts competent and fun.

And there’s enough thrust to coax the tail into a thoroughly predictable slide if you link things up right.

It’s the predictability of the C Coupe that impresses most. While it has the pace to crank out some deceptively brisk laps, you can clock them without having to try too hard. 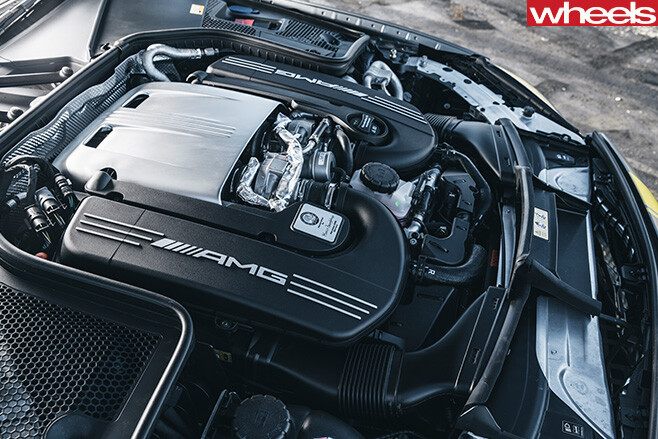 The 4.0-litre V8 twin-turbo V8 is unchanged, producing the same 375kW of power and 700Nm of torque for a delicious spread of grunt across its free-revving range. And AMG still leads the pack when it comes to the aural accompaniments of a blown V8.

Aficionados will appreciate the unique body, too. Pumped guards front and rear (adding 64mm and 66mm of width respectively) make for a muscular stance, albeit with a tapering tail that isn’t to all tastes.

If passengers aren’t your thing – the twin back seats are tight for head room – the C Coupe is a delicious step up from the sedan it shares an engine and most of its interior with. And for only $5000 more than the four-door. 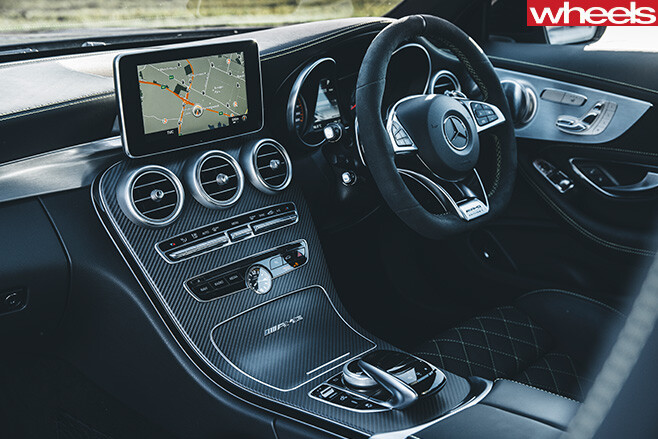