Let’s address the small, mid-engined elephant in the room.

When it comes to two-seat roadsters under $200K, Porsche’s Boxster is the benchmark. Mercedes-Benz’s SLK55 AMG put up a good defence, relying on brutish charm to stand out on its own. But now that Mercedes has flicked the SLK55 and its atmo 5.5-litre V8 for a flagship with a new name, drivetrain, and body, can it keep a foothold in the segment? Not on dynamic merit alone.

While the SLC is a significant update of the SLK, it’s more evolutionary than the name change suggests. The front-end’s been stiffened and the suspension’s been overhauled, but it hasn’t banished its aggressive ride and doesn’t sparkle with fine balance or bite. Instead, in true AMG tradition, the Mercedes SLC43's main event is its driveline. The new nine-speed auto is always in the right gear. Engage Sport Plus mode and it’ll also deliver fantastic downshifts under braking.

You’ll find the same 3.0-litre twin-turbo V6 in C43 and E43 variants, but it sounds best here, unfiltered by sound deadening and tickling your ears with its raucous wail. It pulls hard from 3000rpm all the way until its redline, and would walk past a Boxster on the run (it should, at 50kW and 100Nm healthier). 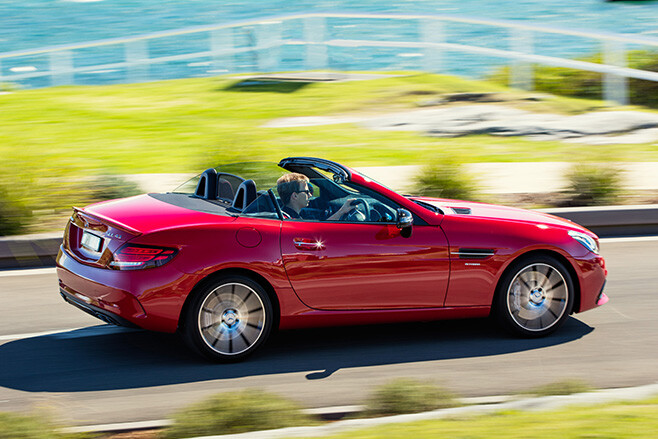 However, this stonk can prove too much for the rear axle – it’ll tramp during hard launches. The ESP system’s been tuned with this in mind, as it constantly cuts traction to help the LSD-equipped rear end cope with the power. Which says a lot about the car.

The SLC43 is enjoyable on the right road and day. But to match a long-time benchmark, that might not be often enough.