THE Porsche 911 range expands even further with the addition of the GTS, packaged to aim straight at the driving enthusiast.

WHAT IS IT
The Porsche 911 GTS is the new sub-Turbo performance flagship of the iconic two-plus-two sportscar range. It is available as a coupe or cabriolet, with either all- or rear-wheel drive, and also as the innovatively topped Targa. The five-variant line-up effectively doubles, as each version comes with a choice of either a seven-speed PDK auto or a manual.

WHY ARE WE TESTING IT?
Until now, there was a noticeable gap in performance between the 'entry-level' 911 Carrera S and the track-honed 911 Turbo and GT3, but the GTS now slots in with more power and driver-focused features without having to shell out top-spec money. 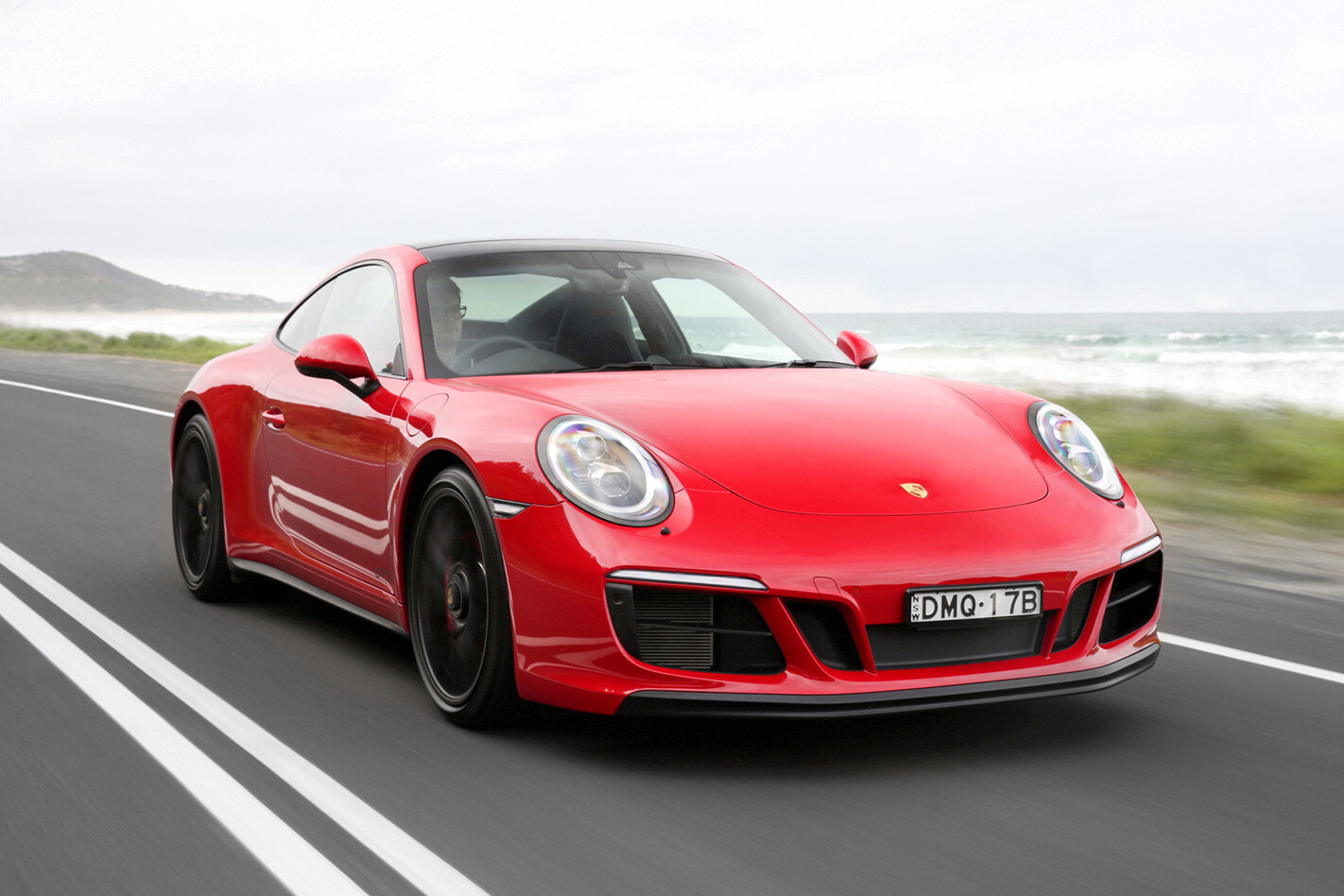 THE WHEELS VERDICT
It may seem like the 911 range is becoming more crowded than the 5.30am Shinjuku train, but the new mid-range GTS option fills an obvious gap.

All-wheel-drive versions, including for the clever Targa top, may be more a value-boosted, badge-engineered bundle, but the rear-drive coupe and convertible are our pick of the performance propositions.

Not only do you get more grunt to shake the rear-driven wheels loose, you also get the sewn-up set of sports suspension, wider hips and mighty wheels to gather everything back up again.

In the 911 range, it represents a fine balance of on-road comfort and track-blasting performance. 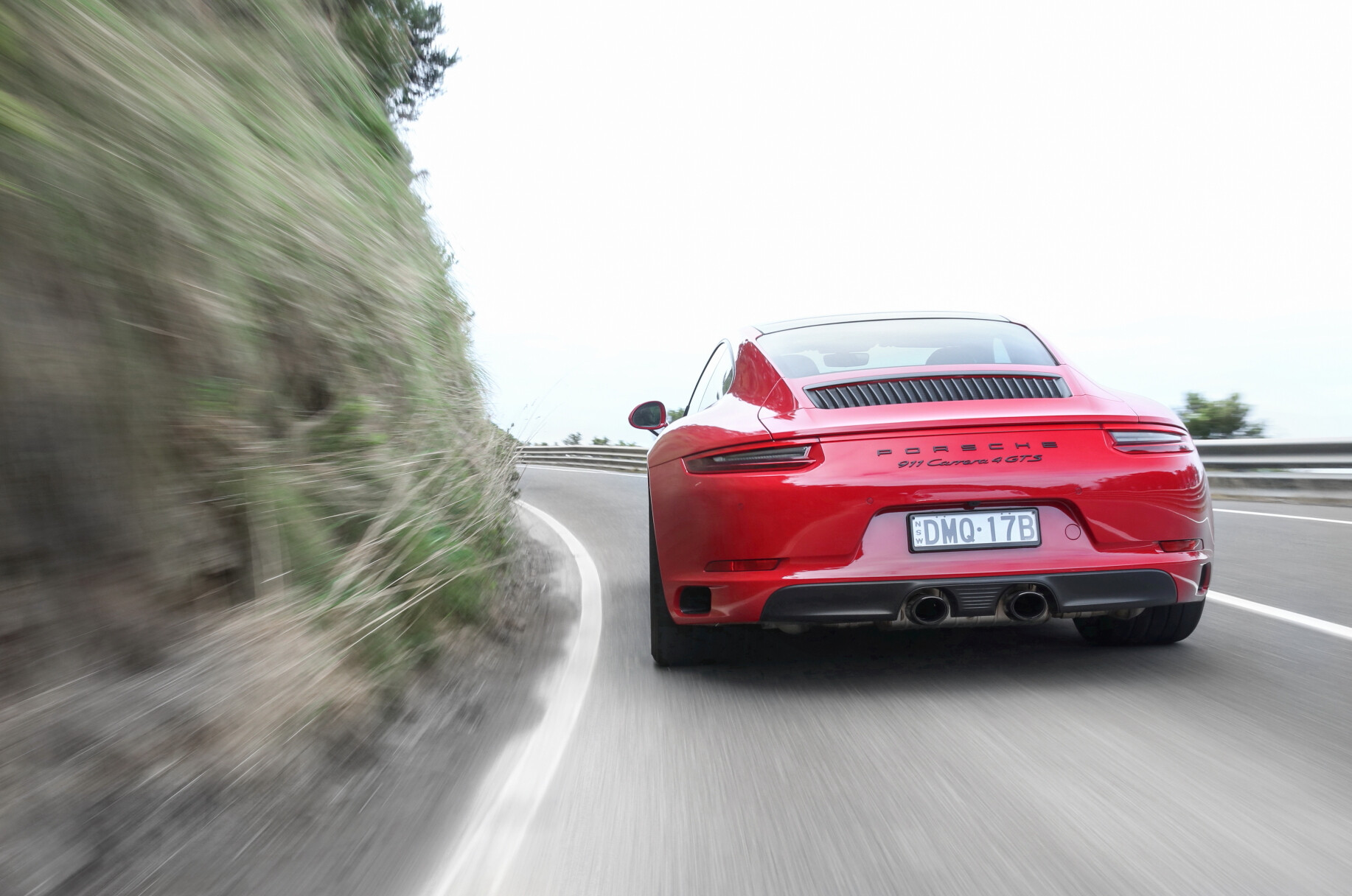 THE WHEELS REVIEW
IF YOU look at the proliferation of variants in the average premium Euro model line-up, it seems choice has become key to establishing a firm foothold in the segment. And Porsche is certainly adhering to that mantra by adding five fresh GTS versions that blow the 911 range out to 22 variants.

Finding the room was tricky: Carrera versions already look after the entry point, the GT3 has track fanatics covered and the Turbo keeps well-heeled speed junkies happy. What the GTS offers is something in between thanks to a power hike over the Carrera, and a selection of performance-enhancing extras.

The engine is Porsche’s familiar 3.0-litre turbo flat six, but a boost of 22kW and 50Nm over the Carrera S takes the vital statistics up to 331kW and 550Nm. Add hot, 20-inch centre-lock wheels borrowed from the Turbo (regular five-stud alloys are a no-cost option) and tweaked spring and damper rates for a sportier disposition and you have a series of 991.2 variants with greater corner-carving agility that still retain the day-to-day practicality of more proletarian variants. Three bodystyles are offered – coupe, Cabriolet and Targa – with each available in rear- or all-wheel drive. Prices range from $282,700 for the manual rear-drive coupe to $320,400 for an AWD convertible or Targa. Choosing Porsche’s excellent seven-speed dual-clutch adds $7390, though purists will doubtless pocket that sum and retain the seven-speed manual.

Spend a little time – and a lot of cash – with the options list, and you could create something similar to the GTS from a Carrera 4S. But not when it comes to the rear-drive version which, for now, is the only way you can have a rear-drive 911 with the wider (by 44mm) rear arches. 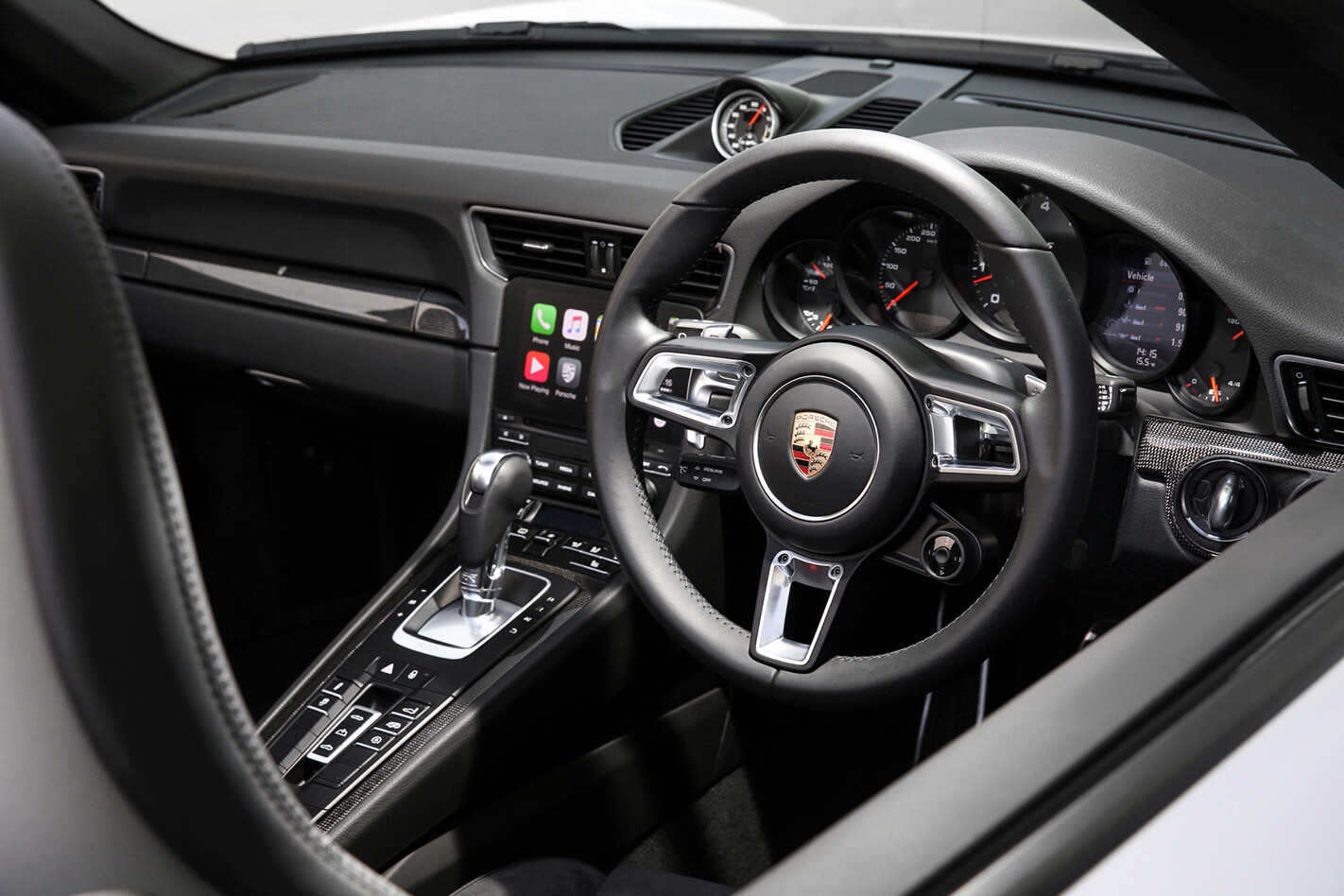 There is an immediate feeling of cohesion in any of the current 911 variants, but the GTS incrementally hones the dynamics, from the smaller, 360mm steering wheel, to lowered, firmer suspension that delivers even sharper handling.

Piloting a rear drive Carrera coupe through some challenging corners in slippery early morning conditions will have you questioning the wisdom of spending another $16K on all-wheel drive. Traction on corner exit is so reassuring it’s like being led in a waltz by someone better at dancing than you.

The pumped-up flat-six delivers peak torque at just 2150rpm, but despite all the midrange turbo shove, the boxer engine maintains linear and strong acceleration all the way through to the lofty 7500rpm limiter.

Admitedly the extra grunt isn’t immediately obvious compared with the not-exactly-lazy Carrera S, yet even with more poke the rear-engine layout is fearsomely efficient at getting power to the road, backed up by spookily effective traction and stability control calibrations. 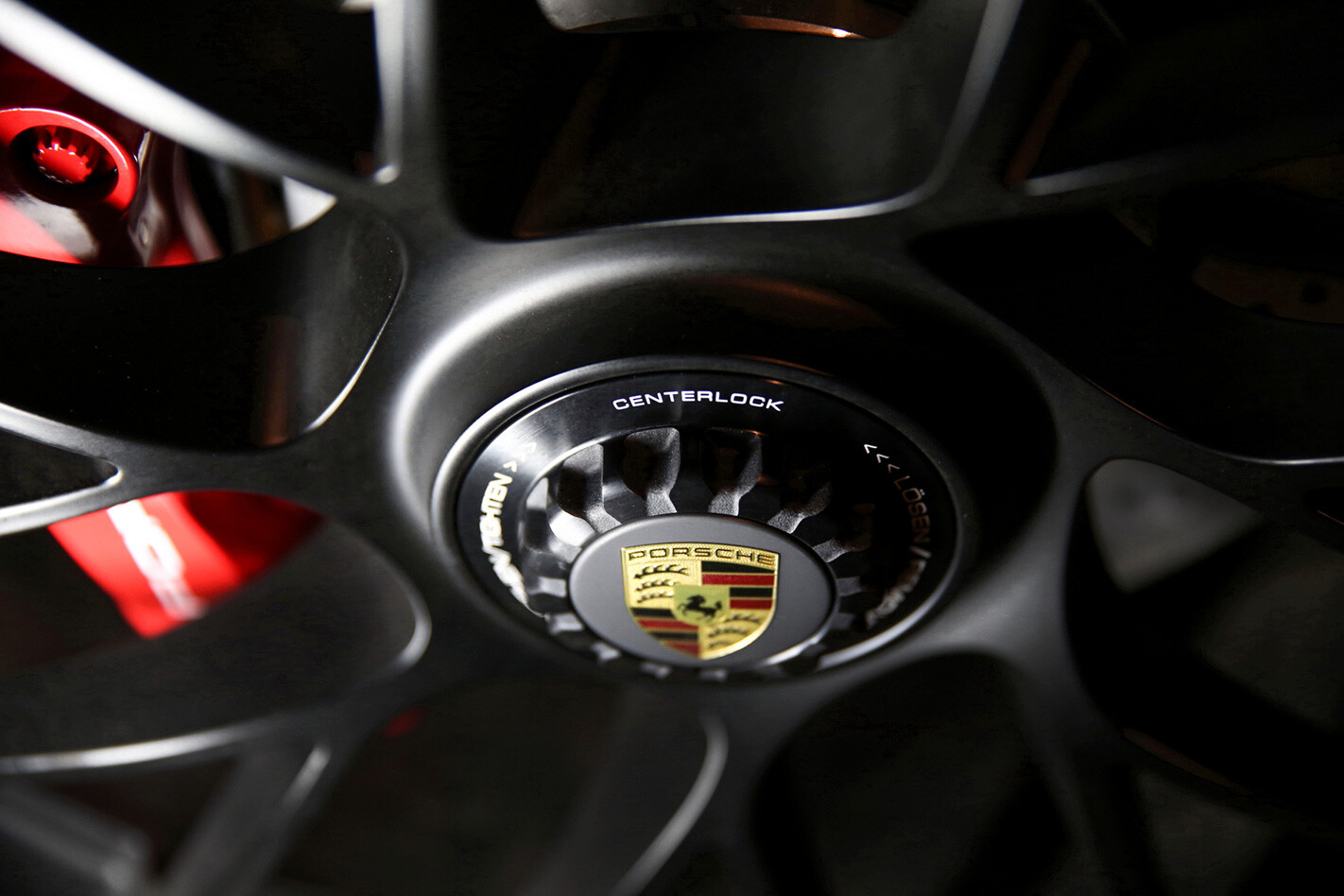 The engine’s crisp and charismatic note belies its turbocharged induction. The only unwelcome noise comes from the massive rubber, which generates a cabin-filling roar over coarse surfaces. But the 20-inch wheels and Pirelli rubber (245/35 up front, 305/30 out back) deliver pin-sharp handling, without detracting much from the compliance of the secondary ride.

Adding five extra variants to a crowded 911 range might have seemed akin to shoving passengers through the doors of the Shinjuku train at rush hour, but a few hours with the GTS underscores why it has developed a reputation as the sweet spot in the 911 line-up. Big game hunter
This latest series may be positioned as the crowning Carrera models for the road, but the GTS can still hold its own on the track. Straight out of the showroom, wearing standard road tyres, the GTS tore up a lap of performance-car yardstick the Nurburgring in a swift 7 minutes 24 seconds. That’s 4.0sec quicker than Porsche’s mid-engined V10-powered Carrera GT. Progress, eh? 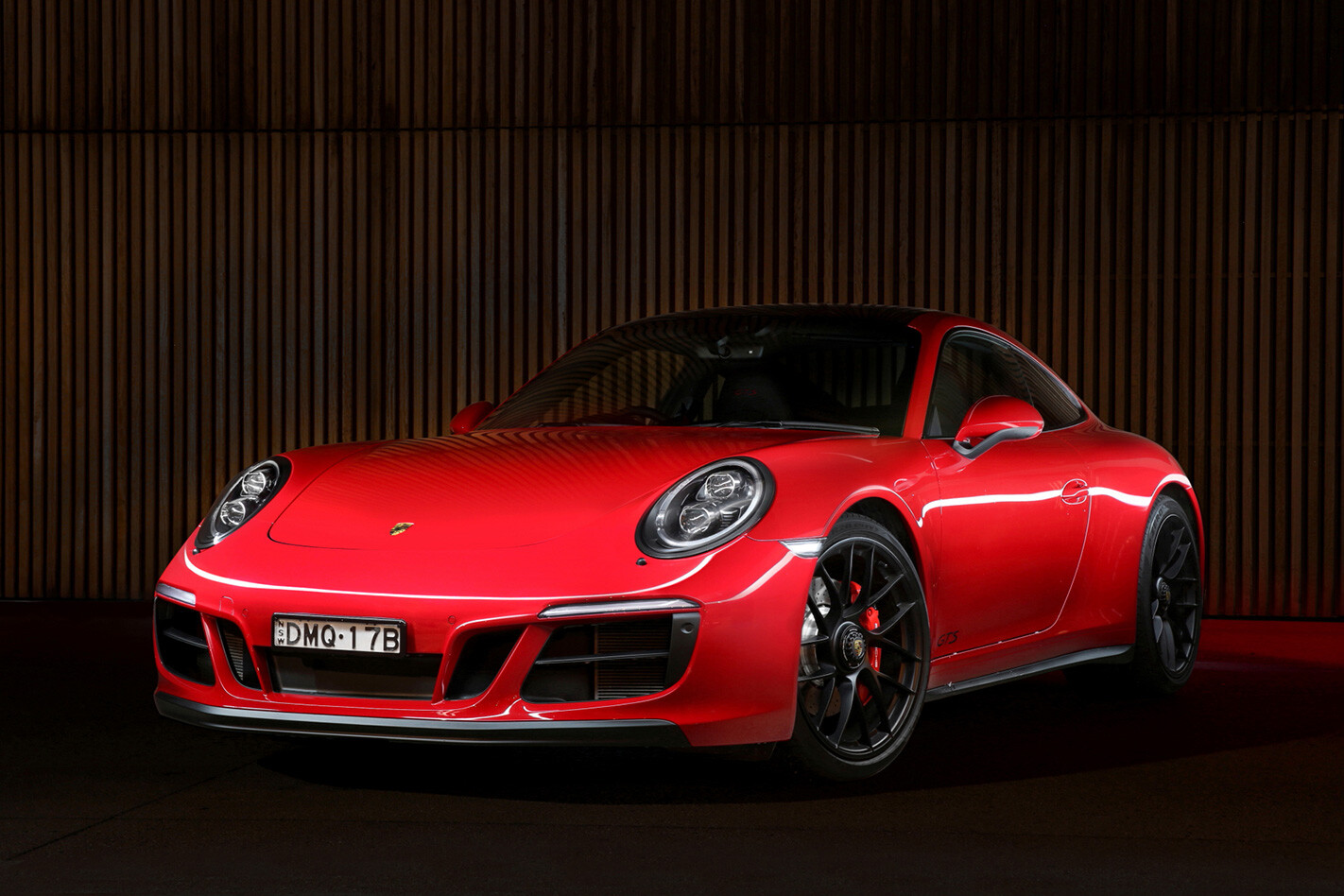