Porsche’s previous 911 GT3 was always going to be a hard act to follow, but the 2017 models’ six-speed self-serve gearbox and glorious NA engine will keep the purists content.

WHAT IS IT?
The GT3 version of the freshly facelifted Porsche 911, getting a more powerful atmo engine and the welcome return of a six-speed manual gearbox, to be offered as a no-cost option alongside the standard seven-speed PDK. As before, it’s pitched as a car that’s been designed to work on both road and track. 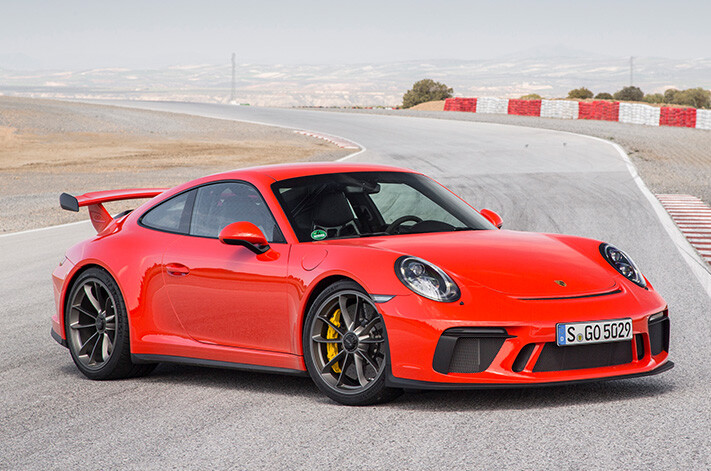 WHY ARE WE TESTING IT?
To see if Porsche’s Motorsport division can keep up an unbroken run of hits – the last GT3 was one of our favourite all-round performance cars and this one offers a host of incremental improvements.

MAIN RIVALS
Two strong rivals immediately spring to mind: Nissan’s GT-R in recently launched and hyperbolic Nismo trim, and Mercedes-AMG’s GT super coupe. All three are cars designed to shine both on and off the circuit, having been designed around the unique challenges of the Nurburgring.

THE WHEELS VERDICT
Forget the suspense; it’s another solid hit from Porsche. The new GT3 doesn’t add much to what its predecessor offered, but it doesn’t need to – even incremental progress is enough here. It’s not the quickest car for the money, but on first impressions nothing offers a more rewarding driving experience.

MINUS: Lacks the toys and comfort of plusher 911s; not as fast as the Turbo S in a straight line; deleted rear seats.

THE WHEELS REVIEW
FOR some people, a Porsche 911 is just a 911 – a nice sportscar, but one that won’t ever manage the sort of street-stopping “who’s that?” theatre that a full-on supercar delivers. For others, the GT3’s relative lack of brag has always been core to its cult appeal, as what’s long been one of the most rewarding cars to drive hard on road and track.

It might sound mad to describe anything costing north of $300,000 as a bargain, but you could add another zero to that total and still not find a better all-round performance car.

Of course, it’s been that way since the first GT3 was launched back in 1999, successive generations codifying the formula of a race-derived chassis and powertrain that have been house-trained to deliver real-world usability. You’ll be unsurprised to hear that the new car – 991.2 in Porsche-speak – sticks closely to the script, with the ambition of the team that created it to deliver improvements over the already awesome 2013 GT3.

The most obvious change is the arrival of a new engine, the rear-mid-mounted atmo flat six now displaces 4.0-litres rather than the previous car’s 3.8, but is still closely related to the powerplant in the GT3 Cup racer. Power has increased by 18kW to 368kW, torque has risen by 20Nm, and is available across a broader spread of the rev range.

More importantly, the red line is still set at a dizzying 9000rpm, 750rpm beyond where peak power arrives, making the GT3 - by our reckoning - the highest-revving sportscar currently on sale. A more significant mechanical change is the no-cost option of a six-speed manual gearbox in place of the standard seven-speed PDK. This follows on from the decision to develop the gearbox for use in the back-to-basics 911R that was spun from the previous RS, plus what we’re told was strong customer demand for a clutch pedal.

Andreas Preuinger, the head of Porsche’s GT car division and the man who pushed hardest for the manual option, reckons up to a third of global GT3 sales will be specified with three pedals, although likely a smaller percentage in Australia. 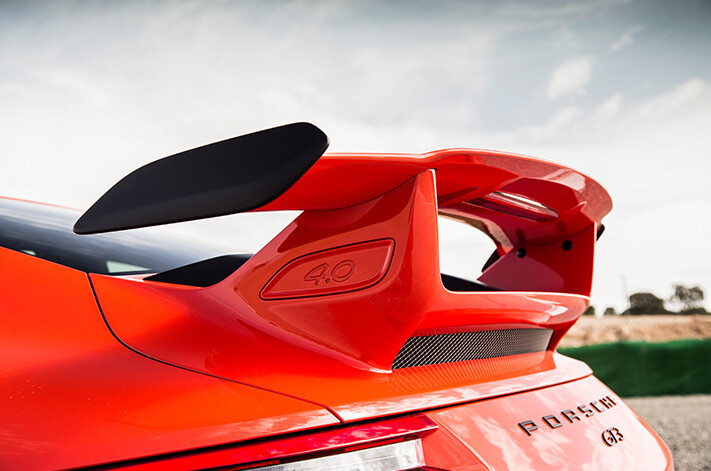 Design has been given a nip-and-tuck, with redesigned bumpers and a slightly higher-mounted rear wing which, in conjunction with a new diffuser, has increased peak downforce by around 20 percent while also cutting drag. Oh, and there are now some very cool ram-air ducts to direct more flow through the engine cover.

Other differences, although plentiful, soon fade to invisibility; apart from the welcome arrival of a new, improved touchscreen interface – and the same steering wheel that was fitted to the 918 Spider – the cabin feels unchanged.

But while the driving experience is familiar, it’s noticeably sharper. The engine remains a masterpiece; five minutes in its company is enough to vindicate Porsche’s decision to stick with natural aspiration. No, it can’t match the whizz-bang performance of turbocharged rivals – including its own 911 Turbo sister – but, although the engine doesn’t get out of bed for much less than four grand, its enthusiasm for revs – and the savagely joyful noise it makes at full chat – encourage the sort of hard use the car seems to revel in. Throttle response is also sharper and keener than anything with forced induction.

The standard PDK delivers ultra-quick changes all of the time, and adds a head-jolting torque bump to upshifts in its punchier Sport mode. As usual, Porsche laid on a track for its press debut. The tight and technical 3km long Circuito Guardix in Grenada, Spain, proved that the dual-clutch box is ideally suited to hard circuit use. While the manual is noticeably slower, and has its six speeds are spread more widely, it has the same near-perfect shift action as the 911R, and the engine’s screaming top end masks the gaps.

Track use also demonstrated the GT3’s near total resistance to understeer, certainly once the super-sticky Pilot Sport Cup 2 tyres were warmed through. It’s a car with the security to tolerate serious abuse, not something that could be said of pre-GT3 lightweight 911s, but also with more than enough finesse to reward accuracy and precision. 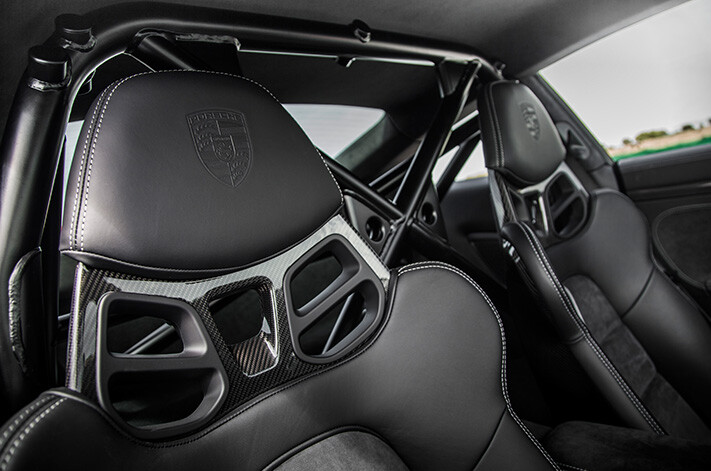 On road, it is even more impressive, the dampers deliver an unexpected level of compliance and the steering remains chatty even without track loadings. On dusty Spanish roads the track-focussed tyres were often short of grip, but the GT3’s helm flags the front end’s battle between grip and slip better than a semaphore school.

It’s noisier than a regular 911 when cruising, economy takes a hit over the standard car’s fuel-sipping turbo engines and it does without rear seats; but it’s definitely more everyday viable than anything else this track focussed.

While this 911 will doubtless spawn an even faster, and even more expensive, RS sister, the regular car could well be the better piece of engineering. If we had to choose just one performance car to keep forever, it would be this one.

Manufacturers often boast of motorsport influence in their powerplants, but the GT3’s engine is very much the real deal – it’s built alongside the company’s 911 race engines and we’re told it’s almost identical to the flat six in the GT3 Cup racing car. Similar to the outgoing GT3, this one has active rear steering and active auto-stiffening engine mounts, plus torque vectoring with the PDK. The PDK also releases its clutches if you pull both gearchange paddles together, “meaning that the rear of the vehicle can be deliberate destabilised".

Australian versions will be pretty much fully loaded – as you’d hope for $327,100 basic – although carbon-ceramic brakes will be reserved for the options list. Deliveries will start towards the end of the year.

There’s an improved data logging system as part of the PCM infotainment system. The Track Precision App records lap and sector times along with basic telemetry, which can also be shared to a smartphone to impress your mates.