Godzilla in its angriest, fastest, and most expensive form. At Bathurst.

WHAT IS IT?
The biggest, baddest monster lurking in Godzilla’s lair. Built by Nissan’s motorsport arm and sporting bigger turbos, a more resolved aero package and a host of suspension upgrades, the GT-R Nismo is the fastest and most track-focused GT-R ever. Don’t believe us? It can lap the fearsome Nurburgring in 7:08.679.

WHY ARE WE DRIVING IT?
Because this isn’t just the launch of the GT-R Nismo, it’s the re-launch of the Nismo brand in Australia. Two other Nismo models – likely to be the 370Z and Juke – will join the GT-R on Aussie roads in the coming years. Plus, Nissan chose to launch the GT-R at Australia’s own version of the Nurburgring – Mount Panorama. Godzilla, at Bathurst? As if we’d pass that up. THE WHEELS REVIEW
FORREST’S Elbow. Bathurst. Not a place you’d normally associate with a moment of crystal-clear realisation, and yet, as the GT-R Nismo launches from the downhill lefthander, its traction-control light blinking with epileptic urgency at the top of fourth gear, 200km/h already on the dial, that’s exactly what happens. My mind drowns out the fighter-jet roar of the twin-turbo V6, the slight tugging on the wheel as the semi-slick Dunlops scrabble for traction, and instead zeroes in on the battle-scarred piece of cement to my right. 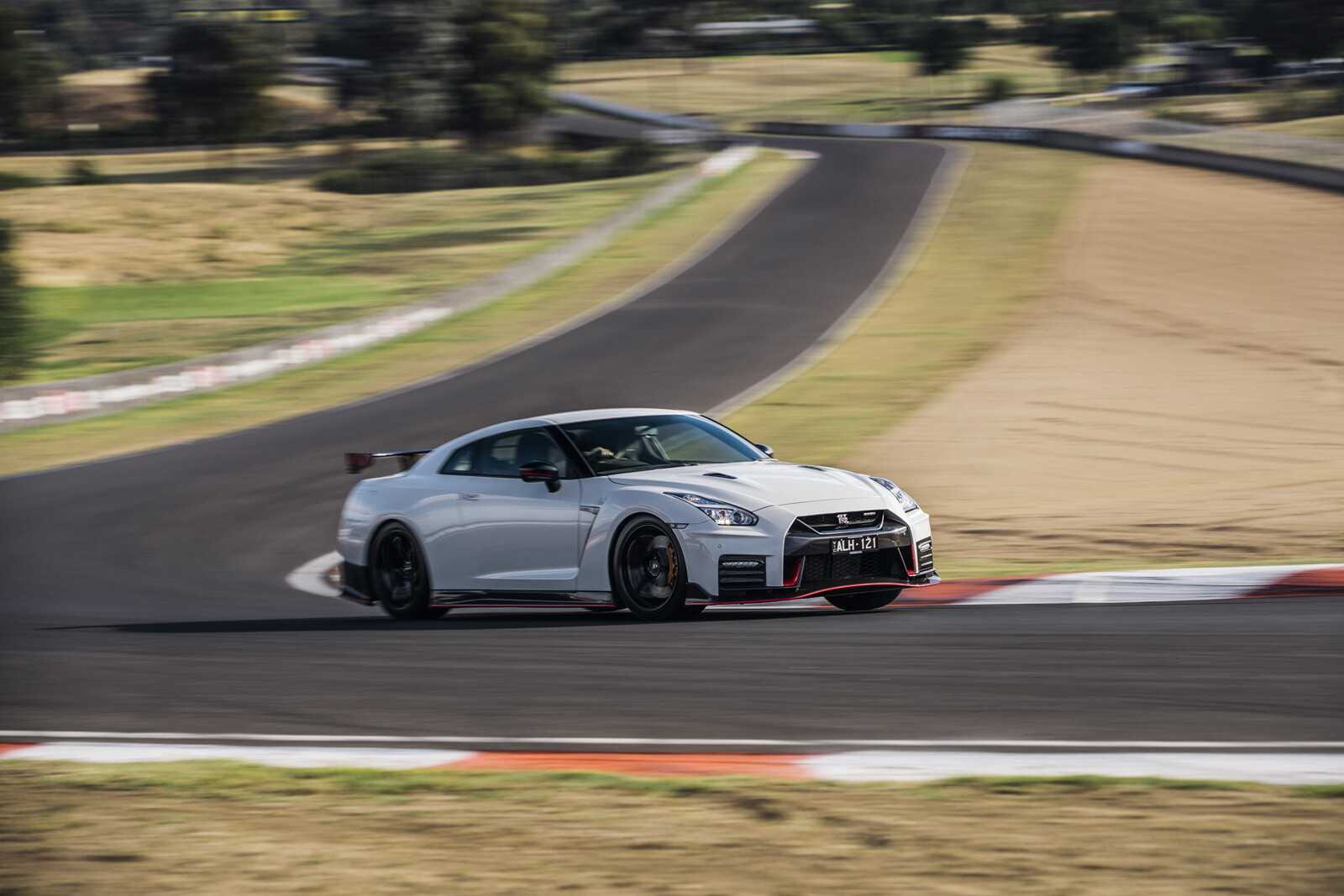 Reality returns with a rush and seconds later I’m resisting the urge to lift as the car goes light over the crest on Conrod at 280km/h, yet the moment isn’t lost.

Richards’ crash during that rain-soaked race, and his resulting controversial victory alongside teammate Mark Skaife, is at the core of the GT-R’s legend in Australia.

And now, 25 years later, Godzilla has returned to The Mountain. And what a return it is. In the land of GT-R, this Nismo version is the biggest, baddest and fastest of the lot. It’s also the most expensive. Nismo will only built around 200 a year, 20 or so of which will make their way to Australia for the princely sum of $299,000. In the GT-R hierarchy, that’s a whopping $101,000 more that the already rabid GT-R Premium, and $72,000 more than the GT-R Track Edition, which shares the Nismo’s bonded chassis (for an 8 percent improvement in rigidity), stiffer suspension componentry and semi-slick rubber (255/40R20 up front, 285/35R20 out back).

So what exactly do Nismo buyers get for the extra coin? The suspension has been overhauled too, and is even more focused than the Track Edition. The spring rates, shocks and dampers are all Nismo specific, and there’s also a hollow rear anti-roll bar.

What has changed is the weight, but not by as much as you’d expect given the Nismo’s extra lashings of carbonfibre, which also extends to the front and rear bumpers and the bootlid. Officially, the Nismo hits the scales at a hefty 1739kg, just 26 kegs less than the regular GT-R.

Still, small incremental gains have long been the GT-R calling card and as I pull out of the pits onto Mountain Straight for the first time, I’m instantly reminded of the staggering way this thing stacks on speed. The VR38DETT isn’t what you’d call particularly raucous or sonorous, but it is eye-openingly effective. There is some turbo lag down low, but once on song the V6 rushes to its 7100rpm redline with a ferocious intensity. 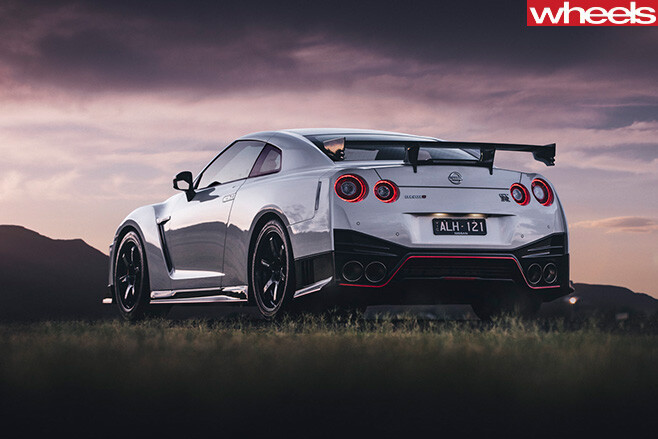 Another welcome reminder is just how connected the GT-R feels. In a world of polished, refined supercars the GT-R Nismo is refreshingly analogue, its diffs grumbling and transmission clunking at low speed and its hydraulic steering providing a tactile sense of communication. Nismo’s engineers have added a little more steering weight, and the result is a tiller that’s immediate, direct and instantly confidence-inspiring.

If the bottom of Mount Panorama is all about power and big stops, then the top is about finesse. And the GT-R comes to the party. It turns in hard, is eager to change direction, and demonstrates a sense of balance and grip that defies its substantial heft. It’s particularly impressive through the high-speed sections, where is feels almost unflappingly stable. The brakes are mighty too, though several hard laps does result in some fade and a longer pedal.

The Nismo is also a car that’s easy to over-drive. Get too fussy with the steering or too eager on the throttle and you’ll run into understeer and power oversteer. Better to be smooth, to settle the car and revel in the grip and the way the rear-biased four-wheel drive system edges the backend wide on corner exit. Is it as engaging and as rewarding as rivals that weigh 200kg less? That’s questionable, but in isolation the Nismo is a staggering thing.

Where it makes less sense is on the public road. On ageing, pockmarked tarmac around Bathurst, you instantly notice the Nismo’s extra focus. The suspension isn’t crashy, in fact it’s well controlled, but there’s no hiding that it’s super firm. Tramlining is rampant, too, and if you do hit a big bump at speed, the whole car will skip half a lane across the road. Is it unbearable? No. It is acceptable? Just, if you’re driving to a race track.

For regular use, the much cheaper, and only slightly less focused Track Edition makes more sense. Which brings us to the core of the issue facing the GT-R Nismo: does its exclusivity and incremental performance gains justify its $300K price tag? Objectively, no it doesn’t. But as a car to experience, as an expression of what the GT-R is capable of, the Nismo is one of the most engaging, talented and characterful cars on sale. It’s deserving of its place at the top of Godzilla’s family tree.