THE Renault Megane GT hatch has been joined by a wagon version that offers more in terms of space and practicality without compromising performance.

WHAT IS IT?
Renault has expanded its popular Megane range, with sedan and wagon variants joining the already-established hatchback. The range-topping GT wagon tested here shares much with its hatch sibling including its 1.6-litre turbo engine, Renault Sport suspension and four-wheel steering, while also bringing extra practicality in the form of a capacious boot.

WHY WE’RE TESTING IT
The Megane GT hatch is an enticing rig, so it’s intriguing to see how its warm-hatch performance translates into wagon form.

MAIN RIVALS
There are few small performance wagons here for around $40,000, but you could chuck in the Mini Clubman Cooper S and perhaps the medium-sized Skoda Octavia RS 162 TSI. 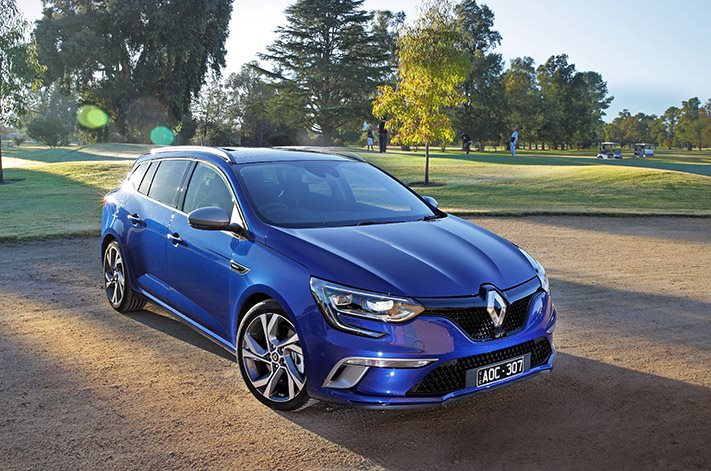 THE WHEELS VERDICT
The Megane GT wagon retains the desirability and driveability of the hatch while introducing new levels of practicality that make it a great little all-rounder.

THE WHEELS REVIEW
THE mist-soaked winding roads south of Albury were as good a place as any to try out the Renault Megane GT wagon’s handling and four-wheel steering and to see how they compared to the similarly equipped hatch. 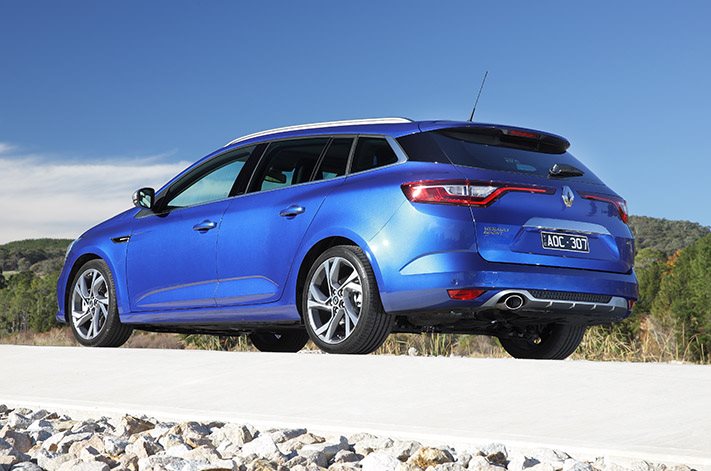 This translates to incredibly direct and precise steering, particularly in Sport mode, which complements the wagon's impressive body control. It copes well with big hits too, despite its performance slant, recovering from bigger bumps with ease.

Like the Megane GT hatch, the wagon is a deceptively quick and agile car. The 151kW/208Nm 1.6-litre turbo engine has performance that skirts the border of hot hatch territory, and is coupled to a seven-speed dual clutch transmission that responds well to the revvy turbo’s mid-range torque.

The transmission does a reasonably good job of predicting driver needs and selecting the appropriate gear when, say, braking hard, but in the wet and winding conditions of the hilly launch route it occasionally couldn't keep up rapid changes in pedal inputs. Thankfully, the GT's column-mounted shift paddles allow a manual override for when the road gets truly twisty.

That said you need pianists’ fingers to use them given they don’t move with the steering wheel. They obscure the light and wiper stalks so you can’t see how they’re set either, and the gear stick is a little too far forward to comfortably use its plus-minus manual shift plane. Ergonomically, the Megane still could use a little more work. 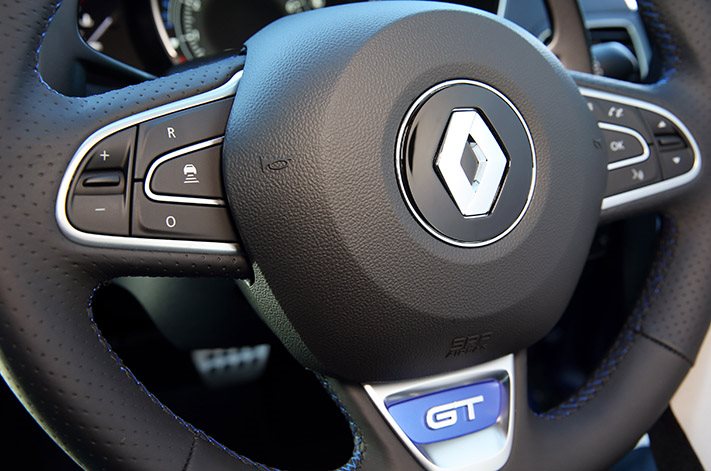 Unlike the GT hatch, road noise on the coarse country B-roads was surprisingly subdued despite running on the same 225/40 R18 tyres. Cabin comfort also benefits from more generous dimensions. Both the wagon and sedan are 269mm longer than the hatch and stand astride an 11mm longer wheelbase, resulting in 37mm more rear legroom and a rear seat backrest that's reclined further back.

The wagon’s 580 litre boot space expands to 1504 litres with the 64/40-split rear seats folded down, offering substantially more cargo capacity than the hatch’s 434L/1198L. Its sloping roof line means a tighter rear opening, but the tailgate, which opens automatically by swiping your foot underneath on the GT, opens beyond 90 degrees to help facilitate loading and prevent head injuries. 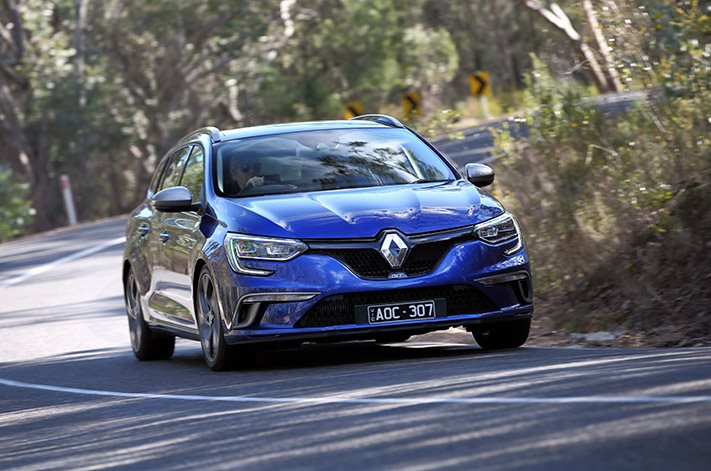 The extra space and dimensional growth sees a 38kg weight gain over the hatch, resulting in a 0.3sec slower 0-100km/h time of 7.5 seconds, but the same claimed combined fuel economy of 6.0L/100km.

From the B-pillars forward, the Megane GT wagon is virtually identical to the hatch with an 8.7-inch portrait-format screen, ambient lighting, heavily-bolstered sports seats with blue contrast stitching, and blue metallic highlights on the door trims. There are soft-touch surfaces aplenty, though the cup holders on the centre console are still ridiculously small. 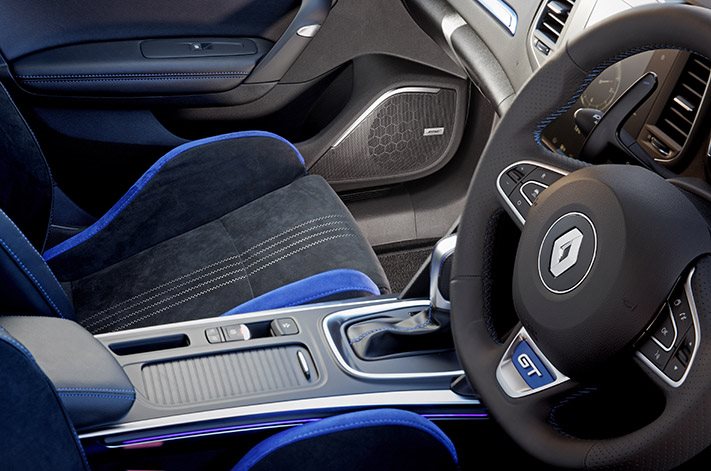 Outside you’ll find the same distinctive C-shaped front LED running lights and eye-catching rear-light arrangement that stretches across the tailgate. And while the roofline is longer than the hatch’s, it still has the bulging shoulder line and raked forward tailgate that subtlety harks back to the delightful Gallic quirkiness of Renaults past.

Small wagons make up just five percent of C-segment sales in Australia and of these the Megane GT is the only one that offers the kind of sports performance and handling  that fills the void between hot hatch enjoyment and small-SUV practicality.